Free Games with Gold for October 2018

Microsoft has announced the Xbox Games with Gold lineup for October 2018.

First up, available October 1 to 31 on Xbox One is Overcooked, a chaotic co-operative cooking game. Working together chefs must prepare, cook and serve up each order before the baying customers storm out in a rage. Then, from October 16 to November 15 on Xbox One subscribers can download Victor Vran, an isometric Action-RPG with a large selection of weapons, items, outfits, demon powers and destiny cards. Use special moves, combine skills and weapons to wipe out hordes of hideous beasts and clever boss monsters.

For subscribers on Xbox One and Xbox 360, from October 1 to 15 they can download Stuntman: Ignition. Master the most death-defying vehicle-based stunts ever put to film and rise to stardom to unlock big-budget blockbusters and lucrative commercial deals. And from October 16 to 31 on Xbox One and Xbox 360, members can get Hitman: Blood Money, a stealth video game and the fourth installment in the Hitman video game series. The story follows the life of professional hitman, Agent 47, as narrated in cutscenes by a former Director of the FBI to a journalist who is interviewing him. 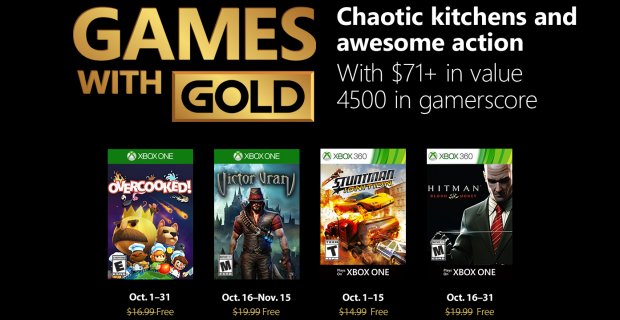 Walking Dead: Season 1
Online
There are currently 0 members and 155 guests on the website right now. Who's On?
Activity in the past 10 minutes: