Fight Night Champion is a multiplayer boxing game that blends traditional one-on-one pugilistic action of previous games in the Fight Night franchise with new, more gritty story-driven gameplay rooted in the all-new Champion Mode. Game features include: unprecedented precision and accuracy of punches; local and online multiplayer support for four and ten players respectively; and a cast of more than 50 boxers from multiple eras and weight classes.

3. The King of Fighters XV 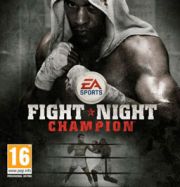