Also known as: The Darkness
On his 21st birthday, the awesome and terrible powers of the Darkness awaken within Jackie Estacado, a mafia hitman for the Franchetti crime family. With his new powers, Jackie is able to wreak terrifying havoc on his enemies. Jackie must learn to fully command the Darkness so he can take back control of the Franchetti family, which is ruled by his uncle Paulie, a despicable man who is almost universally despised.

Darkness, The Screenshots (13)
View All 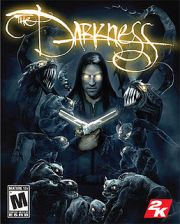 Our Review of Darkness, The
86%
Great
The Verdict:
"This atmospheric and violent action game shouldn't be missed, regardless if you are familiar with the comic books"
Game Ranking
Darkness, The is ranked #106 out of 1775 total reviewed games. It is ranked #4 out of 13 games reviewed in 2007.
105. Dawn of War II - Retribution
PC
106. Darkness, The