Set in Japan, each level takes place in a different flower's dream as it sits on the windowsill of a dull city apartment. As the player progresses through the game, the apartment and city gradually becomes more vibrant and colourful, until it climaxes at the 100% completion mark and the cityscape is replaced by a vibrant field with mountains in the background.

4. Gibbon: Beyond the Trees 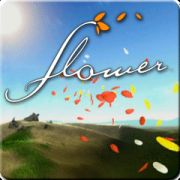