Also known as: God of War 3
God of War III is a third-person action-adventure game, and is the fifth installment in the God of War series and the seventh, and last, chronologically. Loosely based on Greek mythology, the game is set in ancient Greece with vengeance as its central motif. The player controls the protagonist and former God of War, Kratos, after his betrayal at the hands of his father Zeus, King of the Olympian Gods. 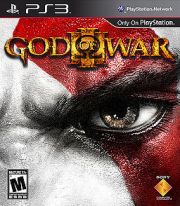