Also known as: Madden NFL 14
Madden NFL 25 celebrates the series' 25th anniversary. Lead your favorite team to a Super Bowl championship as you manage your roster, customize your playbook and conquer a grueling schedule. Take the field as your favorite NFL superstars, and experience the rush of launching a game-winning pass or making a quarterback eat turf on fourth and goal. Relish the genuine sights and sounds of the NFL as you Sprint for pay dirt in authentic stadiums. 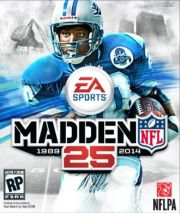