Rock Band Blitz is a rhythm game in the Rock Band series from Harmonix Music Systems released as a downloadable game. Unlike previous iterations of Rock Band, Blitz does not use special instrument controllers, instead allowing the player to use a regular console controller to match notes in a song. In addition to 25 songs that will ship with the game, the title is capable of using any songs the player has downloaded or exported for Rock Band 3. 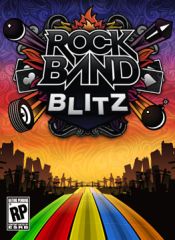