Had I told you 3 years ago that a Batman first person shooter was being developed, you likely would have scoffed. At that time, on the eve of the release of Batman: Arkham Asylum, the words “Batman” and “video games” were most fondly associated with NES and SNES titles. But Rocksteady's Arkham games have paved the road for successful, smaller games with the Batman name. That's where developer Monolith stepped in with Gotham City Impostors. Known for the No One Lives Forever, F.E.A.R., and Condemned series, Monolith has quite the First Person Shooter pedigree behind it. Can it make the transition into the competitive downloadable space, and is the game worth your money? 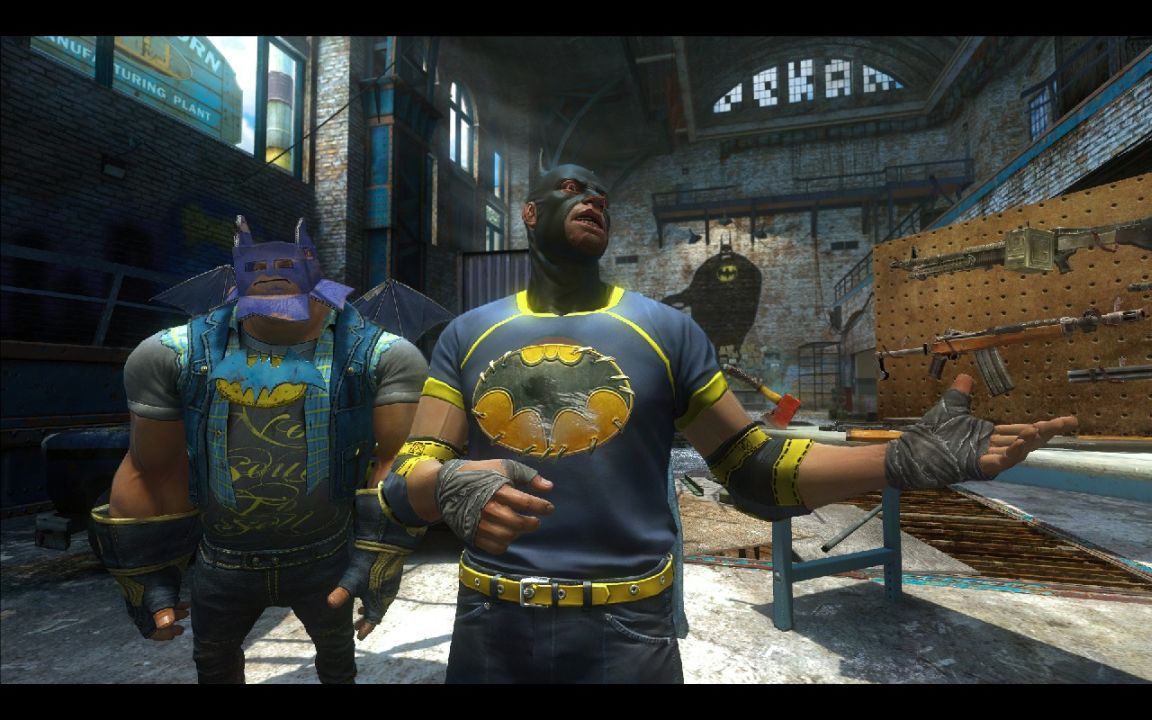 There's nothing sadder than having to start a review discussing the myriad of technical problems that plague a game such as this. Gotham City Impostors seemingly is a game that has not been properly optimized for a mass PC audience. Gamers with both ATI cards and nVidia graphics cards, myself included, have encountered major, game-breaking technical issues.

Most glaringly, issues with frame-rate are immediately obvious as soon as the player starts any gameplay mode: from the 3 multiplayer modes to the single player Challenge Mode, and the cinematic, quirky Initiation. Due to my capable, but modest rig, I first assumed this issue was simply on my end, and did everything in my power to reduce Gotham City Impostor’s burden. The effects were less than stellar. After reducing resolution and video settings, the frame-rate saw improvement, but not enough to make the game any more playable. Monolith has acknowledged that there are issues, but at the time of posting has yet to announced or issue any fixes. In addition to standard technical issues, the game uses Games For Windows Live. While some gamers, such as myself, have never personally had any issues with the system, I understand that the system is highly divisive. If that's make or break information, players should be aware before purchasing.

After reducing my settings as low as they could go, and getting a meager performance boost, I decided to simply jump in to a few multiplayer matches to see how the system was set up. Unfortunately, here is where Gotham City Impostors falls prey to its second major technical problem: the matchmaking is somewhat broken. Now, this isn't to say that getting into a match is impossible. In my many attempts to join matches, I probably spent an average of 5 minutes waiting to start a match. Finding people to play with isn't what makes this waiting period frustrating: there are often at least 4 to 5 other people waiting for you in a matchmaking lobby, but Gotham City Impostors gives no indication that anyone else is joining that lobby. Thus, the player may be waiting in a semi-full lobby minutes with no activity. Furthermore, Gotham City Impostors repeatedly would inform me that it was starting a match, even with a significantly less than full lobby, and then go back on its word, leaving me to wait it out some more. 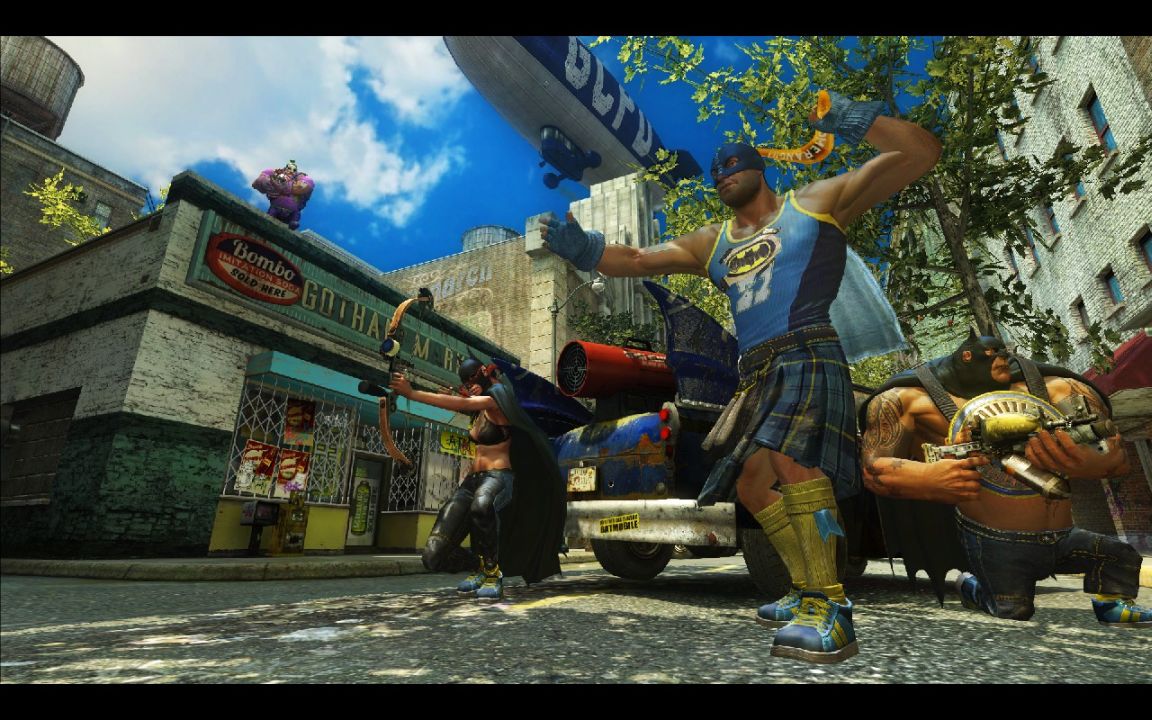 This “reluctance” to start a match may be due to the fact that Gotham City Impostors does not yet feature join-in matchmaking. This means that once a round starts and until it ends, no players searching for games can enter. In the downloadable space, the lack of this feature kills the game. As downloadable titles generally have smaller install bases, the more convenient it is to find any sort of ongoing match, the better.

Fortunately, while waiting in the lobby, or if you're lucky enough to make it into a game, you won't have to feel alone. Gotham City Impostors features voice chat. Wait, did I say features? I meant that it mandates voice chat. The game has no mute option for either the player or anyone else in the lobby, and there is no way to disable mics within the game itself. You will often hear the voices of people that don't realize their webcam mic is picking up their conversations or music, and it just makes for an unpleasant experience overall.

The real shame here is that underneath such deal-breaking problems, I can see the foundations for a genuinely good game. Visually, Gotham City Impostors may bring out immediate parallels to Valve's highly successful Team Fortress 2. Its cartoony, exaggerated art style mixed with the no-frills violence of the first person shooter genre work in its favor, creating just the right amount of cognitive dissonance. Of the different character classes that team Bats and Jokerz employ, each feels well-designed and unique, lending to a sense of personal ownership and play style. I found this very refreshing. In an era of military shooters wherein the only thing that often differentiates a player's look is the name above their head, the distinct look of Gotham City Impostors' characters reminds me that I'm shooting, say, a Scout or a Medic, and therefore lets me prioritize my targets effectively. 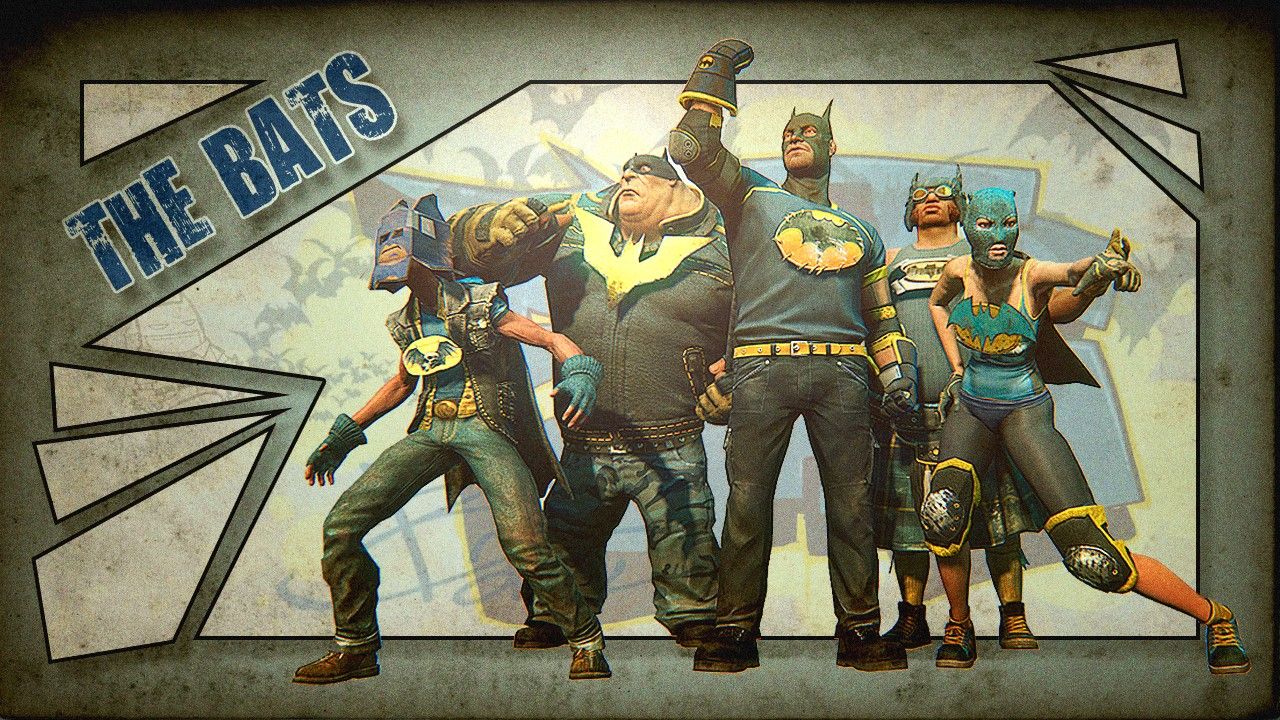 As for the characters themselves, I really enjoy the cobbled-together, off brand look of the Bats and Jokerz gangs. A criticism leveled at the game, when first announced, went something along the lines of “Why play as a dude pretending to be Batman? I want to play as Batman himself!” While I found myself asking the very same thing going in, my worries were quickly assuaged. I found the characters charming and the style confident in itself, and the fact that I was not “actually” playing as Batman didn't bother me in the slightest.

Gotham City Impostors embraces the sillier side of Batman that seems to have been glossed over by his other modern day incarnations. Christopher Nolan's movies and the Arkham games are fantastic, gripping looks into the Dark Knight, but when taken in the context of a comic book hero dressed as a bat, are very self-serious. Gotham City Impostors hearkens back to the lighter side of Batman, providing its own unique brand of comedy in the graphical style, Initiation tutorial, and most fantastically, short animated instructional videos peppered throughout the game. I smiled and laughed during the latter two examples multiple times, something that few games can really make me do.

The game's maps, designed after key areas in Gotham City, look and play well in all three of the games modes. Designed with verticality in mind, maps are multi-layered, with jump pads abound. It's important to note that while players aren't playing as the Dark Knight himself, Monolith has done its best to recreate the feel of an Arkham City in the first person shooter mold. As one might expect from Batman-imitating thugs, traversal is quick and easy. This is largely thanks to the game's grapple gadget, which is perhaps one of the better implementations of a grapple in any first person shooter to date. Combined with various other gadgets such as jump boots, a glide, roller skates, and the obligatory sprint, players feel speedier and more versatile than in most comparable games. Gotham City Impostors finds a happy medium in its structure and speed. It's a game that takes very clear inspirations in structure from both Team Fortress 2, in its class-based, team focused gameplay; and from the Call of Duty series in the leveling system, feel of the shooting, and gameplay modes. This middle ground makes itself evident in the pace of the game: Gotham City Impostors doesn't feel quite as quick as say, Modern Warfare 3, with its spawn-kill-die-spawn-die approach, or but also doesn't feel as potentially drawn out as a Team Fortress 2 encounter. Snappy controls combined with Gotham City Impostors' great traversal put it on near-even ground with the best of even retail FPS games. 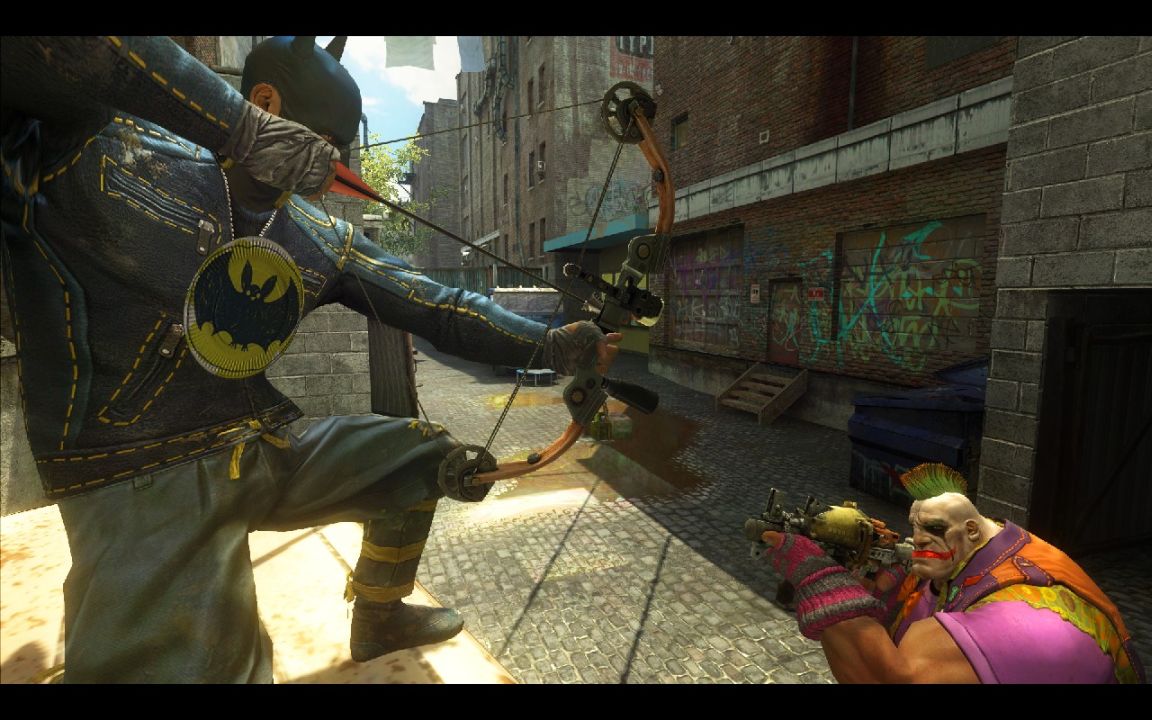 The multiplayer modes are well done, if fairly standard. Gotham City Impostors ships with 5 maps for play with Team Deathmatch, Psych Warfare (similar to of Call of Duty's Sabotage mode); and Fumigation, a mode wherein players must capture and defend points (Sound familiar?). While the modes may seem generic, Gotham City Impostors is a game where personal customization is key. Many have noticed the 100 items of day one DLC on various online marketplaces, and while that may have turned off potential buyers, it's all cosmetic. If dressing up your character was one of the main things that interested you in this game, take heed: much of the visual customization will happen through DLC. As far as gameplay changing customization is concerned, Gotham City Impostors takes inspiration from Call of Duty and Team Fortress 2, and has the now-standard persistent leveling system. Players will gain experience in every match and will rank up, unlocking weapon mods, some costume elements, and the game's equivalent of a perk system. The system here is really solid, and offers a lot to the player that's willing to take the time into investing in it.

I wanted to like Gotham City Impostors on the PC, I really did. But Monolith has released an unoptimized, unplayable mess. If you have no troubles running the game, that's great, and go ahead and play it. However, it's a crapshoot if the game will run on the PC at all, regardless of specifications, and in this day and age it's not a gamble worth the $15 price tag. Gotham City Impostors on the PC could have been a fun, quirky, flavor-of-the-month FPS, but instead just left me with a headache and a bitter taste of disappointment. All in all, Gotham City Impostors may one day be a game that's worth playing, but Monolith's decision to wait nearly a month after launch to release optimization and matchmaking fixes means I cannot in good faith recommend this title.

Our ratings for Gotham City Impostors on PC out of 100 (Ratings FAQ)
Presentation
85
Here's where the game shines. Well-designed characters, a commitment to the style, and a good sense of humor help to set Gotham City Impostors apart from its competition. While some might balk at 100 day 1 DLC items, the cosmetic nature of them didn't bother me.
Gameplay
75
As a class based, downloadable shooter, Gotham City Impostors plays as you would expect, with each class having a unique feel. Traversal is fantastic and enjoyable, and the leveling system is as addictive as any.
Single Player
NR
While there are single player, offline challenges, and a single player tutorial mission, this is a multiplayer first person shooter, through and through.
Multiplayer
65
Broken matchmaking system in a multiplayer-only FPS is one of the gravest sins a developer can make. Should you actually get into a game, however, the gameplay is fun and certainly serviceable.
Performance
(Show PC Specs)
CPU: Intel U7300
GPU: Nvidia G210M
RAM: 4GB
OS: Windows 7 64 bit

20
While some users report no issues, the abysmal optimization I experienced with Gotham City Impostors is shockingly more pervasive than the game should have released with. At lowest settings and resolution, on a competent system, runs sub-30 FPS, with an average of 10 FPS at normal and recommended settings for my rig. Added to poor matchmaking issues and a dearth of options, this game is a hot mess.
Overall
45
Gotham City Impostors is a game that would shine, if not for inexcusable technical issues. The game's great humor, flair for customization, and good shooting cannot make up for the poor optimization that renders the game unplayable.