After the original game set the bar for the Create/Play/Share genre, the Sackboy is back for yet another adventure with LittleBigPlanet 2. Given how much impact the predecessor had on the platforming and user content creation genres, the sequel had a lot to live up to. Unlike the first game, which was marketed as a platform game, LBP2 was actually presented as a “platform for games" – a set of tools that have been expanded to allow creation that’s only limited by the imagination. For the most part, LBP2 succeeds in delivering a more polished, robust, and enjoyable experience and being a worthy sequel to a title that quickly became fan favourite.
In this sequel, the developers at Media Molecule set out to create a much more interconnected and involving single player campaign. Players once again control their Sackboy, who is one day called upon to defend his home planet, which has been invaded by the evil monster named Negativitron. Larry Da Vinci, the leader of a group known as "The Alliance", recruits Sackboy in order to stop the monster from destroying everything. This adventure will take our hero through a variety of environments and levels on the planet, each presenting a unique setting and showcases various new gameplay mechanics. The cutscenes have been vastly improved in the sequel, and now contain actual fully voiced characters. Compared to the original game, LBP2’s campaign is just about the same length (in that it’s not very long), but it serves its purpose of introducing players to all the gameplay tweaks that have been made. 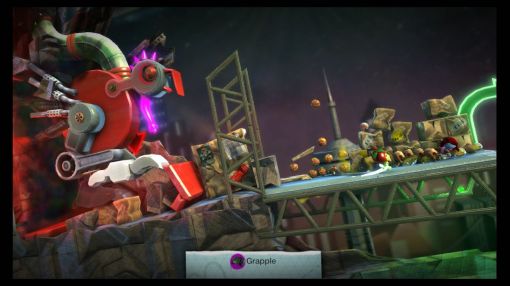 At its heart, LittleBigPlanet 2 is still a 3D platformer, and very few tweaks have been made to the core game. There are still three dimensions (front, center, and back) on the classic platform levels, and Sackboy’s jumping and physics haven’t changed at all. So if you didn’t enjoy the game’s slightly floaty physics before, the sequel won’t change your mind. To make things more interesting though, new items have been added to the players’ arsenal in order to create vastly new experiences.
The Power Gloves allow the player to pickup, catch and throw various objects; the Grappling Hook becomes essential when swinging across deadly fires, and the Creatinator – a helmet that allows Sackboy to create any object in the world. Each of these elements are often used in the game to create new challenges – though none of them are freely available and can only be picked up at certain levels in the game. For example, the gloves will have you catch bombs and throw them at walls or enemies. The hook will let you swing across large distances and other obstacles. The Creatinator can be made to produce water drops, which can put out fires and let the player cross the ground safely. There are also animals in the game that Sackboy can mount, each with unique characteristics such as higher speeds, jumps, and even the ability to fly.
123Next 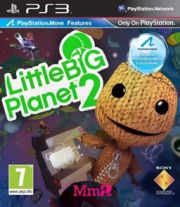 Our Review of LittleBigPlanet 2
86%
Great
The Verdict:
"Sackboy is back with a creative and fun sequel that introduces robust tools and further pushes the boundaries of player generated content"
Game Ranking
LittleBigPlanet 2 is ranked #100 out of 1646 total reviewed games. It is ranked #17 out of 105 games reviewed in 2011.
99. Brothers: A Tale of Two Sons
Xbox 360
100. LittleBigPlanet 2

All videos for LittleBigPlanet 2 (1)
Advertisement ▼