Also known as: LBP
LittleBigPlanet puts the power of absolute creation into your own hands. If you can see it, you can enhance it. If you can't see it, you can invent it. Players can make their world as open or as secretive to explore as they like. When it's ready, they can invite anyone within the LittleBigPlanet community to come and explore their patch - or can go and explore everybody else's. 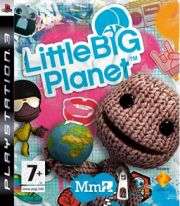 Our Review of LittleBigPlanet
85%
Great
The Verdict:
"Great platforming that is enhanced by the very fun multiplayer and amazing level editor."
Game Ranking
LittleBigPlanet is ranked #144 out of 1788 total reviewed games. It is ranked #8 out of 28 games reviewed in 2008.
143. Call of Duty 4: Modern Warfare
PC
144. LittleBigPlanet