A bloodthirsty bargain for Playstation 3 owners. The legend of Kratos lives on for the HD generation.

Although the origins of ‘action adventure’ games can be traced way back past 2005, it was the original God Of War that propelled the genre to dazzlingly frenetic and cinematic heights. When a game such as Sony Santa Monica’s original thrusts itself onto the scene, all current competitors are instantly vanquished, and everything after it tries but inevitably fails to crawl out from Kratos’ daunting shadow. In video game circles phrases such as ‘like God Of War’ or ‘God Of War-esque’ have become frequent fixtures in vocabulary when critiquing action titles, not to mention the influx of QTE based sequences in games after GOW had popularized the mechanic. 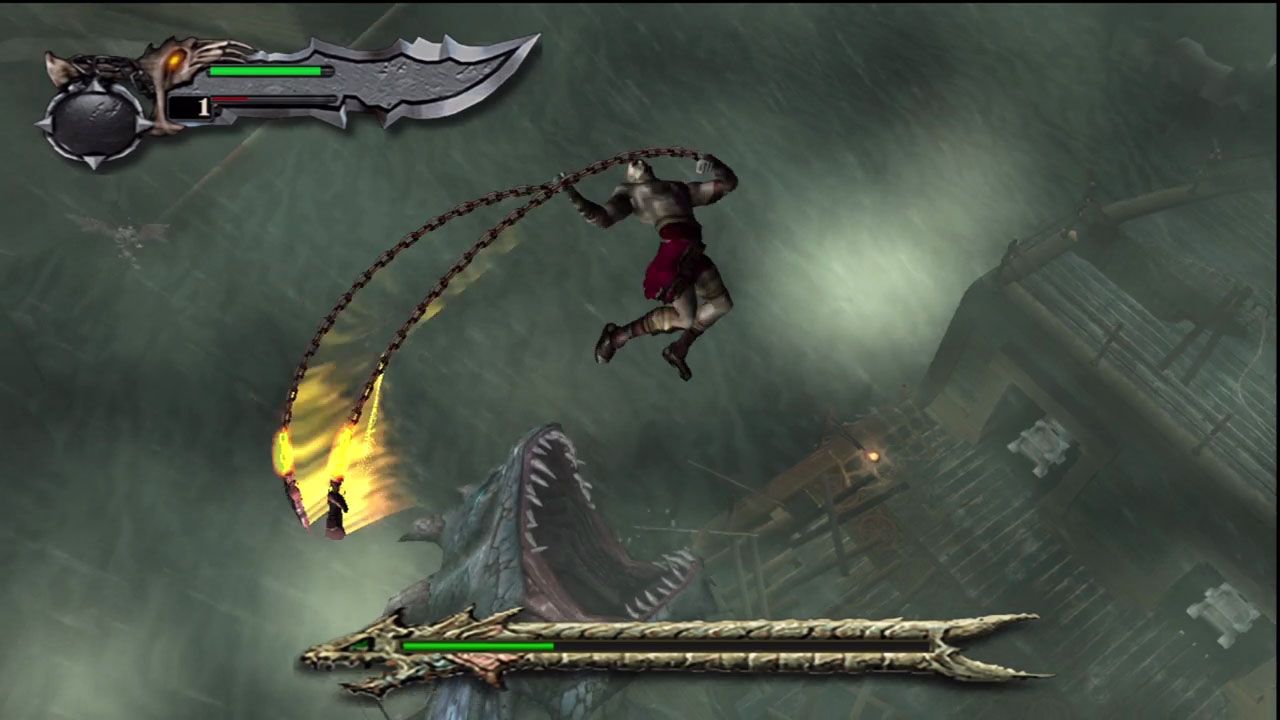 The US method of promoting the God Of War Collection was a far more efficient and relevant way of doing so than in Europe. In build up to the colossal third and final installment of the trilogy, the remastered package was offered at a cut price. This enabled existing fans to re-immerse themselves in the GOW format and story, and also to offer a chance for new players to familiarize themselves with the franchise before the true current generation installment was released. Here in Europe though, we’re treated to the same excellent value HD collection but some time after God Of War 3’s release; hence the anticipation revolving around it has waned and this little gem has rather more of a low key feel to it. However, this is a relatively insignificant gripe when considering the value and quality of this bundle as whole.

A criticism aimed at God Of War 3 was that the gameplay had shown no real signs of evolution throughout the series. However, when the gameplay is as consistently solid as the GOW saga’s undoubtedly is, you can forgive the developers for being cautious in making any wholesale changes to an already brilliant formula.

The original, although five years old, can still hold its own as a stand-alone product. The gameplay we all know and love is there in all its HD, 60fps glory to relive for the nostalgic, or to gleefully indulge in for first time players. The epic feel of the game has been somewhat lost over time however which is fully understandable. While it may have left us awestruck the first time around; the blandness of the character models and backdrops are a symptom of being half a decade old. In the context of PlayStation 2 visuals however, GOW is by no means a poor looking game, and after the satisfaction of skewering the first Hydra around half an hour in, original misgivings about the slightly dated look have been well and truly forgotten. 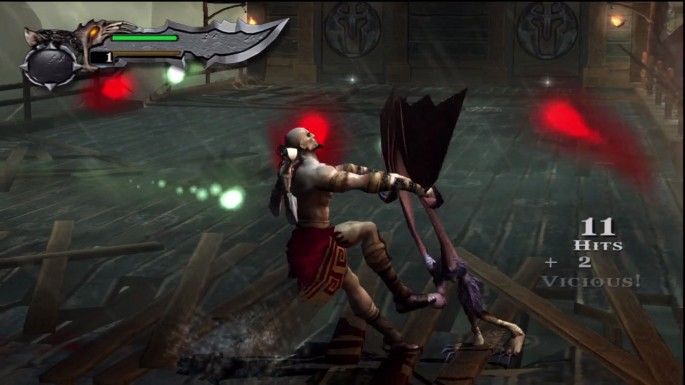 There are some minor niggles and complaints about the original that Sony Santa Monica have ironed out over the course of the series. For instance, the inability to cancel out of Kratos’ ‘Rage Of The Gods’ onslaught is a nuisance when dodging a group of fairly innocuous enemies. An accidental press of R and L3 together can trigger off the attack; thus wasting it on foes that command no real threat whereas it would have inevitably served more purpose against the group of Cyclops’s, Medusa and Minotaur’s around the next corner. Occasionally when attempting to instigate a QTE there’s an issue with placing yourself in the exact position to start the sequence, resulting in slight but infrequent frustration issues in the heat of battle. But, as mentioned, these are pretty irrelevant floors in the context of the series as a whole. The game that spawned the trilogy is still an absolute riot for the eight or so hours of hacking, slashing and puzzle solving it takes to become the embodiment of the game‘s title.

The sequel. Many consider the second installment to command superiority in the God Of War trilogy. The game that (along with the masterful Shadow Of The Colossus) breathed new life into a console that was on its last legs. GOW 2 ramped up the intensity from the first game five fold, and for the most part eradicated the few minor setbacks from Kratos’ initial bloody rampage. There’s a greater fluidity to combat and the improved frame rate exemplifies this even more predominantly in the remastered version. GOW 2 is also a more detailed game than its predecessor and although looking nowhere near as sumptuous the eye popping feast of the third outing; it’s easy to see why it truly pushed the PS2 to its absolute limit, and is still a joy to play on the PS3 three years after original release.

The grander scale of GOW2 is perhaps most finely emphasized by the much improved boss count. From the vast Colossus of Rhodes encounter that spans the game’s opening section, pummelling the Barbarian King with his own titanic hammer, through to the stunning confrontation with Zeus at the frenetic conclusion; GOW2 bombards the player with truly memorable action set pieces. In retrospect the second in the series is arguably the most balanced, and ‘moment for moment’ the game that exudes the highest degree of quality. The inclusion of unlockable ‘treasures’ such as alternative costumes, the arena and the formidable ‘Titan Mode’ all offer a further degree of longevity to an already impeccably playable game; and as part of a cut price package you really are being spoiled with excellence. 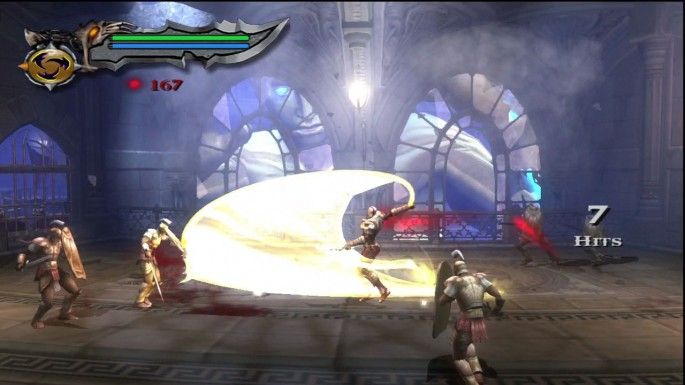 As far as Playstation exclusives go they don’t come much more epic than the God Of War franchise, and the God Of War Collection is an HD slice of gaming that existing and new action fans alike would be foolish to pass on. The bonus ‘Making Of’ content is the icing on the cake for a package that already represents phenomenal value at around a third cheaper than most RRP’s for new games. Although it would seem that Kratos’ inner and physical battles have come to their conclusion on console for the time being, the legend lives on in the form of the God Of War Collection. Even those who still own the original copies of the first two games in the trilogy should pick up this remastered Blu-Ray disc and re-live the saga in high definition. Kratos, we salute you.

Our ratings for God of War Collection on PlayStation 3 out of 100 (Ratings FAQ)
Presentation
89
Two brilliant, generation defining games on one disc plus bonus content. Sony Santa Monica have been very generous to fans and God Of War virgins alike.
Gameplay
91
Frenetic, action packed and core to the GOW experience. Controlling Kratos is a delectably bloodthirsty experience that has certainly stood the test of time.
Single Player
91
At around 8-10 hours per game depending on difficulty there's plenty of God Of War to sink your teeth into. A gripping story, epic boss encounters and truly memorable set pieces make this essential PlayStation gaming.
Multiplayer
NR
None
Performance
82
Two classic games remastered in HD, on Blu-Ray and running at 60fps. Sure, the visuals pale in comparison to God Of War 3 but PS2 graphics never looked so at home in the current generation.
Overall
89
God of War Collection offers brilliant value for such quality titles. A must have for any self-respecting PS3 action fans. 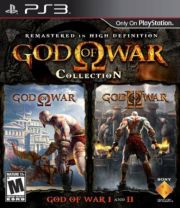