An overly safe sequel that doesn't focus on its strengths

The Sniper Ghost Warrior franchise has seen its share of ups and downs over the years, but in recent times the series has been on an upwards trajectory. Since 2010, the sniping series has experimented with a few approaches, from simply giving you a distant shooting gallery in the first two games, to letting players explore an open world in the third. With the most recent entry, 2019's Sniper GW Contracts seemed to find a good balance by letting players snipe to their heart's content while infiltrating enemy compounds for some close encounters. Contracts 2 hopes to build on that new direction, but it plays things too safely across the board, and the only new change – in mission design - ends up mostly backfiring. 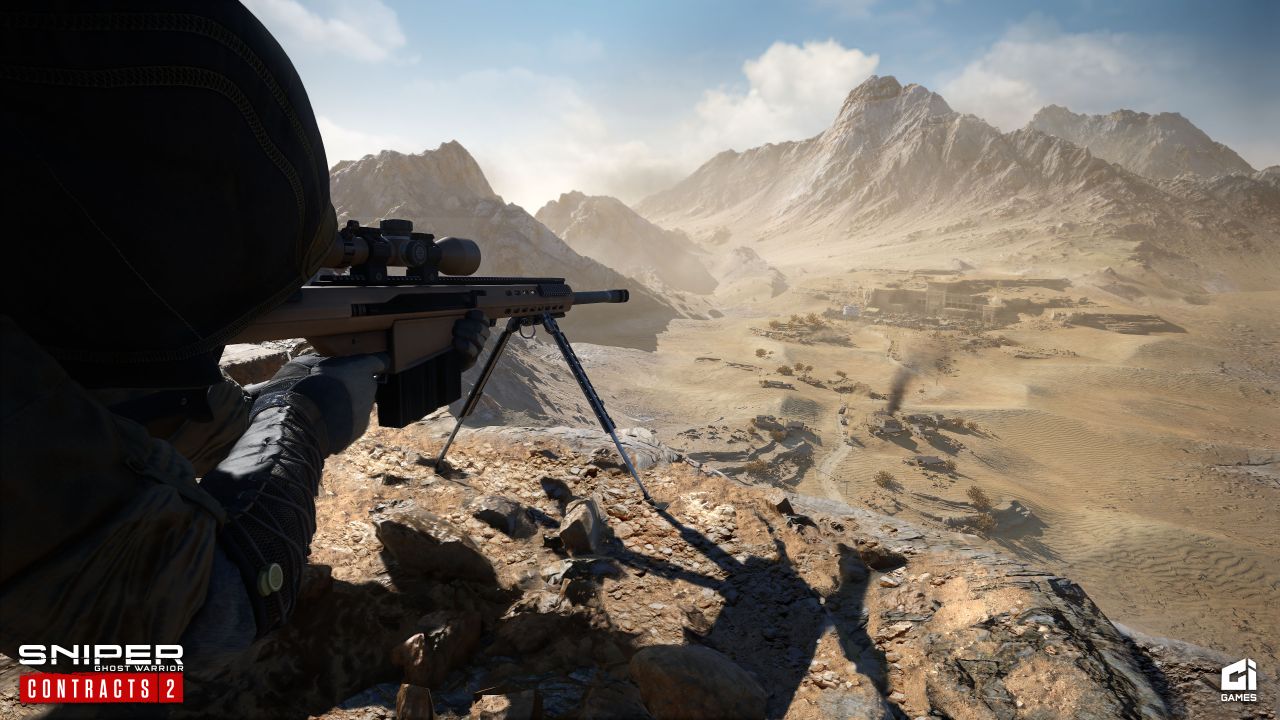 Following the frozen landscapes of the first game, Contracts 2 brings players to an arid Middle East setting. The very predictable story has you, a faceless assassin, follow the orders of your handler as you’re sent in to prevent a global crisis. There's a fictional nation in turmoil, and a dangerous woman with her supporting commanders have taken hold. Your task, paid for by an unknown sponsor, is to eliminate her key organization members and eventually the leader herself. To do so, you'll be sent out to five different deployments, which means that each mission progresses the story quite rapidly and there's not any room for additional details. Still, at least the sequel does a better job at adding just a little bit of life to the character and their handler through bits of extra radio chatter, compared to the original.

The structure of this single player game remains similar to its predecessor. You select a mission, your loadout, and get dropped into a semi-open world. From there, the map clearly points out where the objective areas are located, and there are usually a few ways to get there. Along the way you'll be met with enemy patrols and checkpoints, which you can sneak by, or eliminate everyone inside by whatever methods you choose. The basics of the gameplay haven’t changed – you find a good elevated position, get your binoculars out and start tagging enemies. With careful planning and timing, you can clear entire bases without raising any alarms. If you choose to, many times you can also sneak through without eliminating anyone, take everyone out with silent melee kills, or go in guns blazing. The loud approach remains rather stiff, with assault weapons not feeling very good to handle. The game also insists on occasional first person platforming/climbing, though much less than before. It can still be a bit silly that you can climb on some objects but not others, especially when it comes to urban settings – such as on some stacked crates but not others, despite jumping high enough to clear the object.

In sniping, too, there are no major differences to be found. Your scope still has an indicator (which can be turned off) that clearly shows where your bullet will travel, and lets you adjust your aim for distance/gravity, and wind speed and direction. There's still a great amount of satisfaction to be had when making challenging shots. The bullet-time camera, which you can adjust the frequency of, follows your shot all the way to its target, which is fun to see. However, it prevents you from pulling off critical shots in quick succession as it un-scopes you afterwards, which is a bit of an issue. 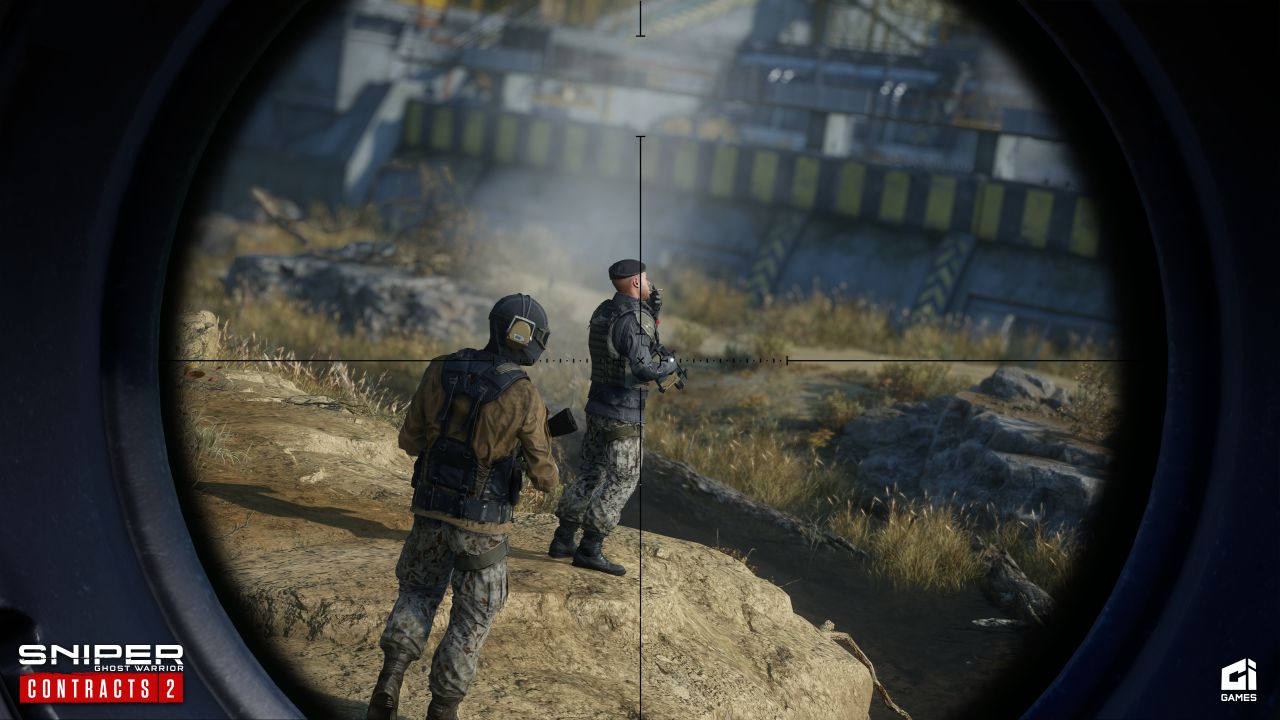 The experience is quite similar, and in some cases that's not a good thing as little progress was made in problem areas. AI is very important in stealth games, but sadly Contracts 2 continues to have many of the inconsistencies of its predecessor. Enemies have unpredictable vision, and there are bugs; AI can get stuck on something while on patrol, or snap between animations which teleports them a few feet – a big deal when you're trying to line up a clean shot. In another example, a flood light that was shot out remained operational and would spot the player. You might encounter a few different enemy sub-types, but everyone except for the heavily armored foes are eliminated with a single headshot from any class of sniper rifle, so there's not much variety improvement. You can hide in the grass, but the game takes far too much liberty here – you're considered hidden when your entire torso is clearly exposed. The hiding mechanics could have really used an improvement, as it's also often unclear which type of grass will hide you. Sneaking up to grab and interrogate an enemy results in extended animations with awkward pauses in dialogue, and the only thing you can gain is marking of all other enemies and where the gear stash is.

You have five missions which you must play in succession as the story unravels, but the game puts a lot of emphasis on replay value. There are collectibles to find, and challenges to complete which are usually mutually exclusive – like killing the target a certain way. It slightly resembles the approach that the Hitman franchise took in recent years, though there's not nearly as much variety – but also not nearly as much grind to unlock everything, striking a good balance. Completing objectives earns you cash, and unlock points, which can be spent at the shop. You can buy more gadgets and weapons, but that's not really needed, as the entire game is easily completed with the starting gear even on higher difficulties. So it's really up to the player to make their own fun and change up how they approach the situation.

You can purchase additional sniper rifles and secondary rifles, as well as pistols and gadgets. Sniper rifles can be light/medium/heavy, and you can equip accessories such as bipods, different scopes, and so on. You can also still bring along special ammo types, such as bullets that penetrate walls, tag enemies, or disable electrical systems. There's not a ton to buy, and after beating the campaign and doing at least some objectives, you should have enough cash to unlock nearly everything. The game does introduce a third currency, intel, required to buy a few of the snipers, which is only gained from eliminating optional targets within the infiltration type missions. The skill trees also return, where you redeem points to unlock new buffs such as improvements to your mask (which scans the area and also offers infrared vision), additional armor and stamina, and extra ammo carry capacity. The gadgets that you can bring along include C4, various grenades, and the turret sniper that can fire on your selected target when told to. The small drone you can manually pilot also returns, but the maps are still littered with towers that limit its use, and it's not worth the hassle. 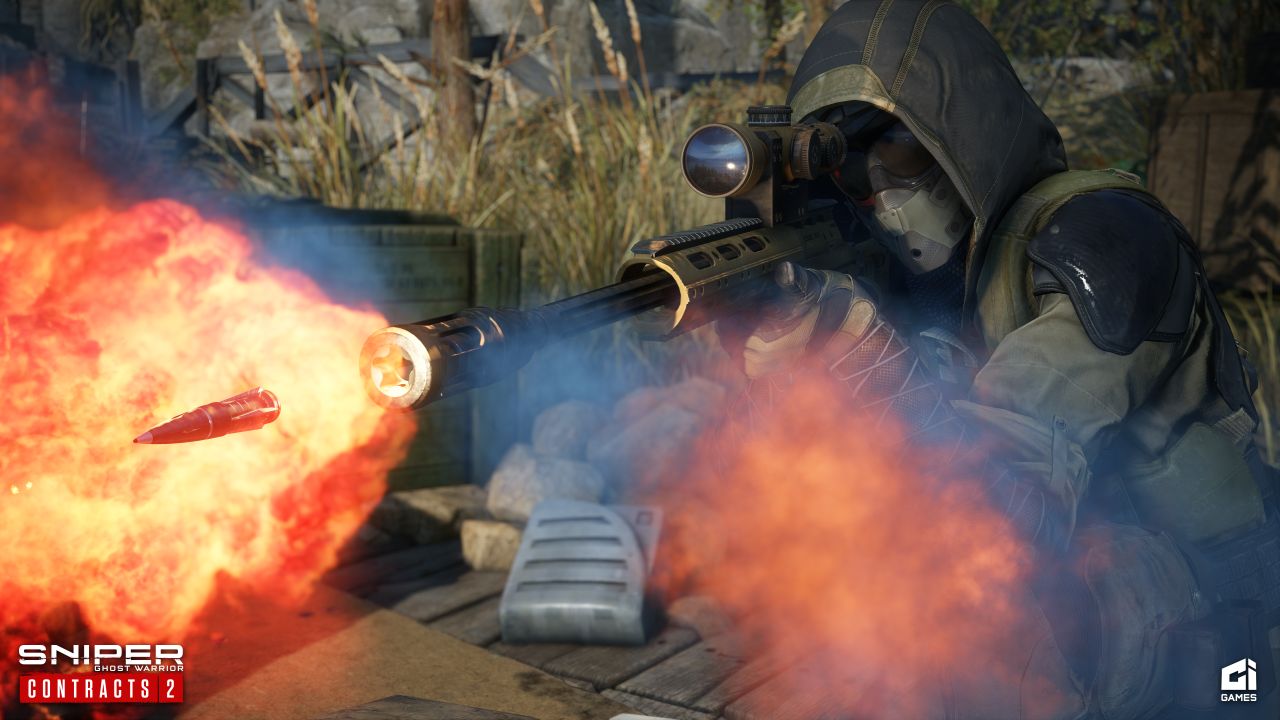 In a large number of ways, Contracts 2 is very much the same gameplay experience as its predecessor, except for one key change. Despite having its origins as a sniping-focused game, the Contracts sub-series has switched things up and made this a more stealth-focused infiltration experience, as you had to get up close and personal by sneaking into enemy territory and completing objectives. But with Contracts 2, it seems the game arrived at an unexpected identity crisis by trying to combine its predecessor's new direction with the old-school approach. Two of the five missions follow the infiltration design – meaning, there's a large map, with multiple objectives you can tackle, and plenty of exploration and discovery to be had, especially on the first map. Despite not having any unique major mechanics from other similar stealth games, Contracts 2 manages to tap into the satisfying thrills of sneaking around enemy bases, after clearing them out from afar, or choosing not to.

However, the other three mission maps focus on the sequel's main selling point – extreme long distance sniping. In these maps, you traverse a small linear area with a few enemies, to reach the next sniping position. The targets in these maps are a long distance away, letting you perform shots at over 1000m. It's an interesting callback to the original mission designs of this and other sniping game franchises, where there is very little immediacy to your actions. The outposts are laid out before you, miles away, and these missions usually have some sort of dynamic element – waiting for when you want to take your shot, protecting someone trying to escape, and so on. The sniping mechanics don't really change, you just have to adjust your scope and aim for greater distances. And while it can be sort of fun to wait and see what the targets will do in their scripted sequences, there's no sense of danger or thrill when you are so far away. It also starts to look silly when alarms are raised, and the enemies take cover to shoot at you with assault rifles – as if they know where you can possibly be, and as if they have any chance to hit you. The long distance missions are an okay change of pace, but they should not have been the focus of the sequel.

Contracts 2 uses the CryEngine once again, and the game performs fine. The switch from snow to sand is rather uninspired, and while the textures and technical aspects look good, there's not much to praise in the very generic military art style. The textures and object details on the long-distance shooting maps can be a bit rough, along with the abovementioned AI issues. Still, there are some nice enough lighting effects, especially on the maps that take place at dusk and at night. Some gore has been added as heads will explode and limbs pop off, but it's rather inconsistent and over the top. The audio design is rather dull; the action sounds OK, but whenever you're hearing enemy soldiers talk (sneaking nearby, or interrogating) they repeat the same lines throughout the game. The music rarely factors into the experience. 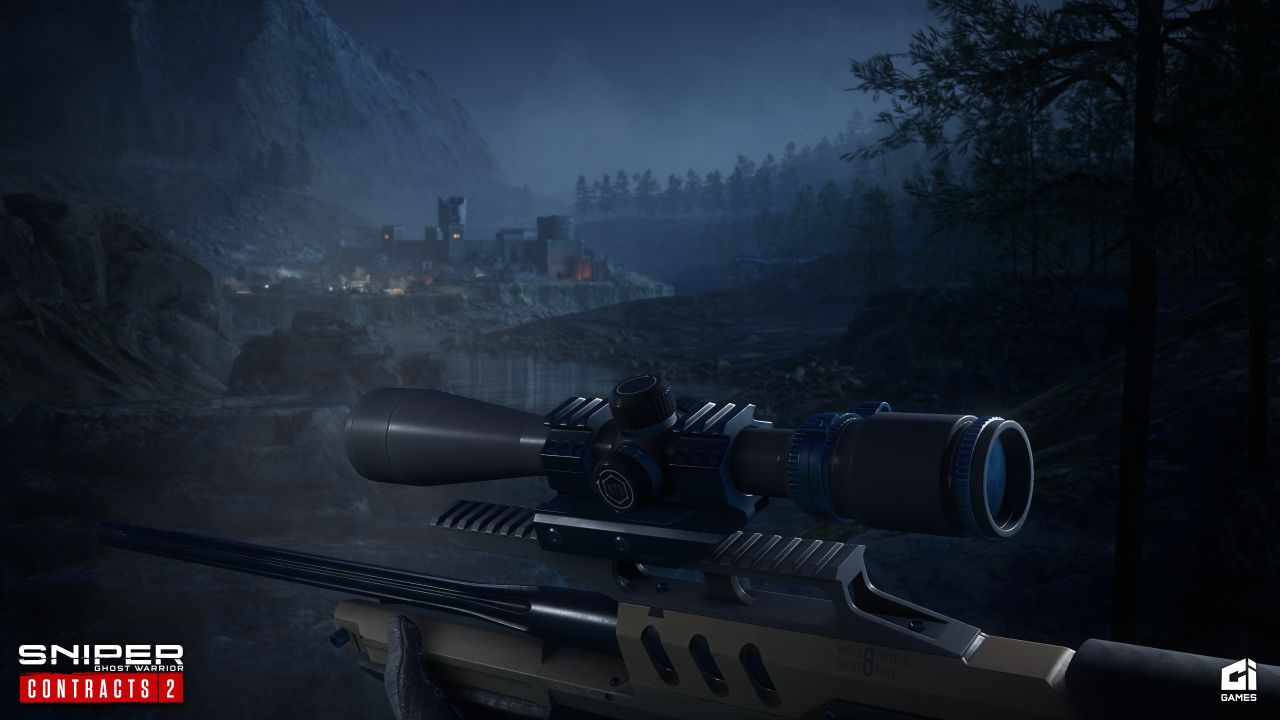 Sniper Ghost Warrior Contracts 2 is a game that's getting long in the name. And while it also lets you take out targets from a great distance as well, it's not exactly a step up that a sequel would hope to deliver. Rather than continue to focus on the satisfying mix of infiltration and sniping – which two of the included missions do very well – the game opts to offer a more retro design with its three long-distance engagements. These missions dilute the experience, and hold the series back after it was just starting to thrive in a new direction. It's also disappointing how little has changed and fixed – from the campaign design, to progression, to sniping and stealth mechanics. Contracts 2 can still be a rather satisfying 10-15 hour experience, and fans of the genre are likely to enjoy it, but it's just unfortunate that the new ideas fall flat, and those that return don't offer any steps forward.

Our ratings for Sniper: Ghost Warrior Contracts 2 on PC out of 100 (Ratings FAQ)
Presentation
72
A technically nice looking game, but one that lacks a visual identity. Audio design leaves much to be desired.
Gameplay
70
For better or worse, mechanics remain unchanged in the sequel. From stealth, to sniping and gunfights, it's a very similar experience to its predecessor, even with the new long range targets.
Single Player
65
The campaign structure offers enough incentive to replay a few missions, without making you grind for money or unlocks for the items you want to buy. The focus on long-distance sniping detracts from the better infiltration design.
Multiplayer
NR
None
Performance
(Show PC Specs)
CPU: AMD Ryzen 5 3600
GPU: ASUS Radeon RX 580 8GB
RAM: 16GB DDR4
OS: Windows 10 Pro 64-bit

80
No performance issues, some AI bugs and glitches
Overall
70
Sniper Ghost Warrior Contracts 2 is a safe sequel that doesn't address enough issues from its predecessor, while diluting the improved and exciting stealth infiltration missions with uninspiring extreme-long-range assignments. 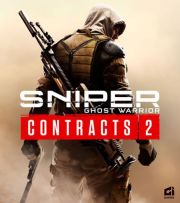