When creating your character, there is a selection of which class you want to play as, and what your background story is. Classes range from commando to spy to rogue and finally engineer. These options will reflect on the skills and special abilities that can be gained through the game. With poor gunplay and even worse AI though, the whole special abilities section seems to matter little as the game simply does not prove to be a challenge for anyone who’s played shooters before. When customizing the main character himself, players are only able to adjust basic visual features such as hair styles and colors, beards and eye color. You can’t change any physical features so Michael will always have the same face. This kind of half-way implementation of a basic RPG feature pretty well defines the whole experience. 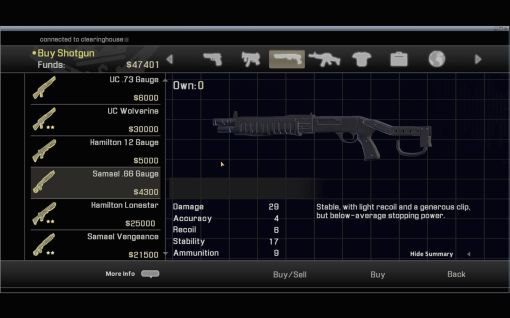 The marketplace offers a wide variety of weapons and gadgets

The presentation of the game is not poor, but it is simply bland and uninspired. There is nothing that stands out in terms of art or locations that you visit. Given that the game was originally scheduled to release in early 2009 certainly shows in the final product. The game doesn’t have very high requirements and runs in DirectX 9, meaning most modern machines should have no problem running the game on maximum settings. Even if you can’t, you are not missing out on much – low resolution textures are everywhere, with occasional pop in problems. The detail and facial animation of the main characters are done quite well, but the rest of the people in the game are largely subpar. Animations also look to have taken shortcuts, with just a handful of melee takedowns available. Characters walk oddly, crouch even more so, and the lip-synching is very poor at times. The voice actors are one of the highlights of the presentation, but even their work is dragged down by very generic dialogue lines. The music and sound effects are very stale and rather boring as well, adding nothing to the already struggling presentation.

As such, Alpha Protocol is neither a good RPG, a well-done action game, nor a particularly memorable experience. Some games can be summed up by the notion of the whole product being better than the sum of its individual parts. Alpha Protocol can be considered for that generalization, if only for the few elements that help save the game from complete mediocrity. If you are looking to try a fresh setting for an RPG action game, then Alpha Protocol is still a solid choice. However, anyone hoping for a generally presentable and fun gameplay experience should stay away.
Prev1234
Our ratings for Alpha Protocol on PC out of 100 (Ratings FAQ)
Presentation
76
Graphics look a bit dated, and the quality voicework is dampened by poor dialogue. The story is solid enough, offering replay value and some shockers along the way.
Gameplay
57
Unfinished, unpolished, whatever you wish to call it - there is not one part of the game that feels really well done. Lots of great ideas in the setting, but too many issues in the execution.
Single Player
72
The game is over 10 hours long, with many side missions along the way. The story offers replay value, but the general mechanics don't change.
Multiplayer
NR
None
Performance
(Show PC Specs)
CPU: Intel Core i7 CPU 930 @ 2.80GHz
GPU: Sapphire Radeon HD 5870 Vapor-X 1GB
RAM: 6GB DDR3
OS: Windows 7 Professional 64-bit

71
The game's engine is a bit old, with some low resolution textures and various glitches scattered throughout the experience. On a positive note, even average PCs will be able to max the visuals - though there is not much to see.
Overall
68
Alpha Protocol contains average gameplay elements that never really come together, thus unable to create something interesting or worthwhile. The game seems to be on a tight budget, resulting in an unpolished experience that can't live up to standard.

Our Review of Alpha Protocol
68%
Adequate
The Verdict:
"A game of interesting ideas that is unable to unravel their full potential"
Game Ranking
Alpha Protocol is ranked #1159 out of 1669 total reviewed games. It is ranked #94 out of 107 games reviewed in 2010.
1158. Rage
PC
1159. Alpha Protocol