When Alpha Protocol was first announced, many gamers were intrigued. A third person espionage RPG isn’t exactly your typical game, and with the proven developer Obsidian Entertainment behind it, things were looking promising. However, it is no secret that Obsidian was also working on other titles, namely Fallout New Vegas, so it’s possible that the studio’s top resources were being drawn elsewhere. Having suffered multiple lengthy delays, Alpha Protocol has finally arrived. While all the promise and ambition of the initial idea is still there, the game suffers from lack of polish, underdeveloped gameplay mechanics, and simply plays like a limited-budget title. 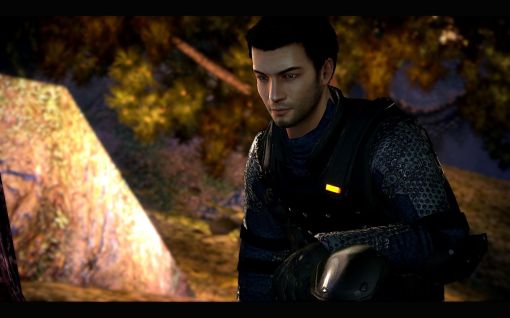 Getting ready for some fireworks

The game’s plot is setup as a modern-day spy drama, and is actually one of the highlights of the game. Players take on the role of Michael Thorton, an agent with a secret government organization that uses “Alpha Protocol”, an operational guideline that allows agents to step outside the boundaries of the law to get the mission done. However, after just a few missions our agent is betrayed, and must go rogue while the whole US government is looking for him. Thorton decides that he will not abandon his country’s interests, and will work against the government if he has to, so that the conspiracy may be uncovered. Along the way, he meets many different characters and organizations with whom the player may choose to cooperate or fight against. The story’s solid enough to see it through to the end, and the dialogue system (discussed later) offers a lot of replay value.

The original appeal of the game was the fresh setting for an RPG game – a spy thriller that lets players choose the fate of various characters seemed appealing and unique. Alpha Protocol does manage to provide a worthwhile story, along with a lot of replay ability options. There are tons of interactive conversations that allow the player to select their response, with dialogue options ranging from angry to professional to even flirtatious. Depending on your conversation selections, your personal relationship with other characters in the game can be affected. If a character likes you, they are more likely to help with information or any other bonuses you need; if they hate you, chances are you won’t even hear from them in tough times. The system sounds good in theory, but in execution the relationship statuses feel like they have little effect on gameplay. For example, after killing all civilian guards in one of the missions, Thorton was completely hated by his main contact in the game, Mina. However, there were absolutely no ill gameplay or conversation changes after the fact.
1234Next

Our Review of Alpha Protocol
68%
Adequate
The Verdict:
"A game of interesting ideas that is unable to unravel their full potential"
Game Ranking
Alpha Protocol is ranked #1186 out of 1721 total reviewed games. It is ranked #94 out of 107 games reviewed in 2010.
1185. Rage
PC
1186. Alpha Protocol