After the first few hours, it seems an obvious choice to select the Commando class for the character since stealth is executed so poorly. Well, the gunplay turns out to be not much better. Initially, when your character’s stat points in weaponry are low, the reticule of your weapons takes up half the screen, leaving no option but to spray and hope the enemy gets hit. Lining up perfect headshots means little until you invest some serious AP points into weapon categories, making the first few hours of the game a frustrating shooting gallery. Later on, the action becomes a bit more bearable, when players are finally able to pull off headshots and quick kills. It seems the developers had the opposite idea from Mass Effect – set player’s shooting ability on their XP points rather than actual skill, which results in many annoyances. 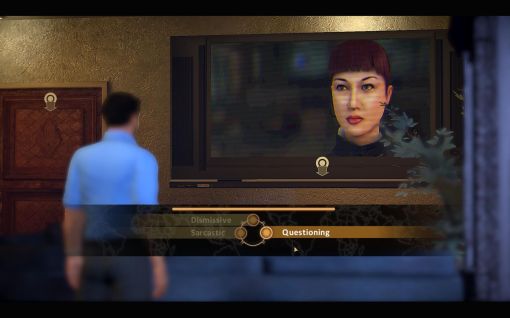 The story relies on player choices, though some outcomes are over-exaggerated

The poor stealth and gunplay could have been forgiven if you were at least up against serious foes. That’s not the case though. AI in Alpha Protocol is very basic, with some very odd behavior programming. For some reason, the default AI reaction seems to be to run to the player to melee him a few times, then run off to find cover and begin firing. Unfortunately for the AI, the melee button in Alpha Protocol might as well be titled “easy mode”. If you can dodge your enemies’ (poor accuracy) shooting, nearly every level can be completed using nothing but your fists. Of course, Bosses and some rare tough enemies manage to make a block or two on your kicks, but the majority of the baddies get taken down in seconds with the hammering of the melee button. There is also a sticky cover system, but it doesn’t work half the time and seems useless when enemies shoot right through the cement blocks you are hiding behind.

The RPG aspect of the game is limited. There is nothing to loot except the occasional weapon upgrades, money drops and ammo resupplies. You can purchase and sell weapons, upgrades and armor, but the inventory system is otherwise very basic. That’s not entirely a bad thing, as the game has a much more streamlined inventory approach, while remaining a bit more complex than something like Mass Effect. The character progression based on experience earned in missions and conversations, which can then be spent to improve various attributes. These attributes range from pistol and rifle skills to increased health and demolition perks. The cost to upgrade each of the categories actually remains static, so upgrading your rifle skill will always cost 6 points, while increasing your health only 4 points, regardless if you are level 1 or 10. The leveling system itself seems to have no impact on the gameplay, other than a milestone for accumulated experience points.
Prev1234Next

Our Review of Alpha Protocol
68%
Adequate
The Verdict:
"A game of interesting ideas that is unable to unravel their full potential"
Game Ranking
Alpha Protocol is ranked #1158 out of 1668 total reviewed games. It is ranked #94 out of 107 games reviewed in 2010.
1157. Rage
PC
1158. Alpha Protocol