The Resident Evil franchise has made its mark on the gaming world with its original slower-paced horror titles, but the series wasn’t always content with this approach. Time after time, and most recently with its main entries Resident Evil 5 and 6, the franchise tried to take on a more action-focused approach, often with mediocre results. With the recently revealed Resident Evil 7, Capcom promises that we’re going back to how it all began. But that doesn’t mean the company will stop trying to create an action game out of the series. Though a similar spinoff like Operation Raccoon City failed to capture an audience, Capcom have created another shooter set in the RE universe, called Umbrella Corps. 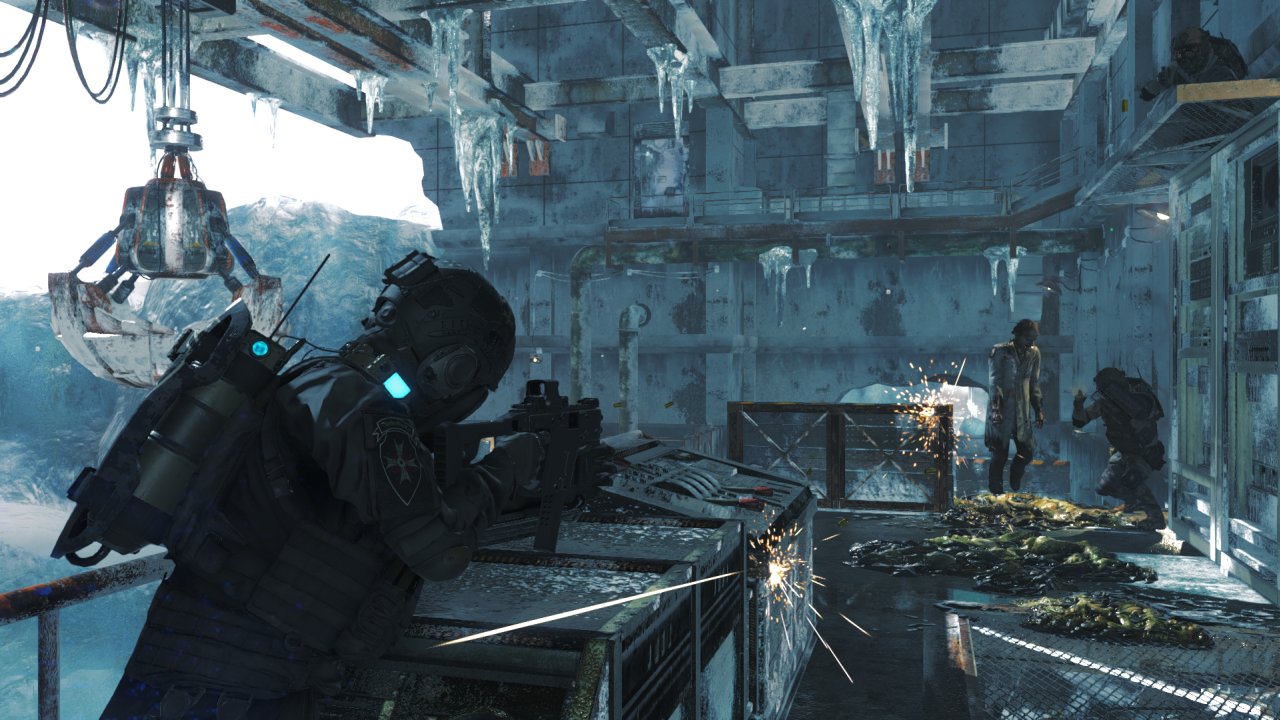 There’s nothing inherently wrong about trying to adopt a franchise, or do a spinoff, into a wholly different genre. And there’s certainly no shortage of good, or even great, zombie action games. But for one reason or another, it has never quite worked out for Capcom, and Umbrella Corps continues this trend. The premise is very straight forward in this third person shooter - Umbrella Corporation, the infamous pharmaceutical company that was best known for its morally wrong genetic experiments and biological weapons research, has folded. This has caused competing firms to enter into a struggle to acquire the bio weapon research that it has left behind. These companies have hired squads of Special Forces mercenaries and let them loose in battles in restricted virus/zombie infected areas. You are one such generic merc.

With a relatively straightforward premise, things aren’t off to a particularly notable start, for better or worse. First up, Umbrella Corps features a single player mode called The Experiment, which is collection of about 20 missions with a few different but mechanically similar objectives. Often, you’re simply tasked with collecting vials that drop from enemies. Infected enemies spawn continuously throughout the level, and the player must manage their ammo and health carefully; because if you die, the whole level needs to be restarted. The action takes place on the same maps as multiplayer so if anything, it serves as a decent warmup and a way to learn the environments. On the other hand, these missions are very dull, repetitive, and rather boring. Though there is potential to be overwhelmed, if you keep moving and gather the generous ammo and health pickups, you shouldn’t have any problems.

The game’s real problems begin long before you have a chance to get far into either single or multiplayer. As a third person shooter, the game feels so wrong in so many ways. First off, the camera is offset and positioned awkwardly behind your character, with his body obscuring a rather large amount of the screen. If you choose to aim down the sights, the process is instant and makes it seem like your gun is suddenly floating in midair, because when you aim, the perspective is certainly not the same as where your merc’s body actually is positioned. Both the aim and movement is wholly unresponsive. Surprisingly, the shooting itself feels OK and guns pack a decent punch. 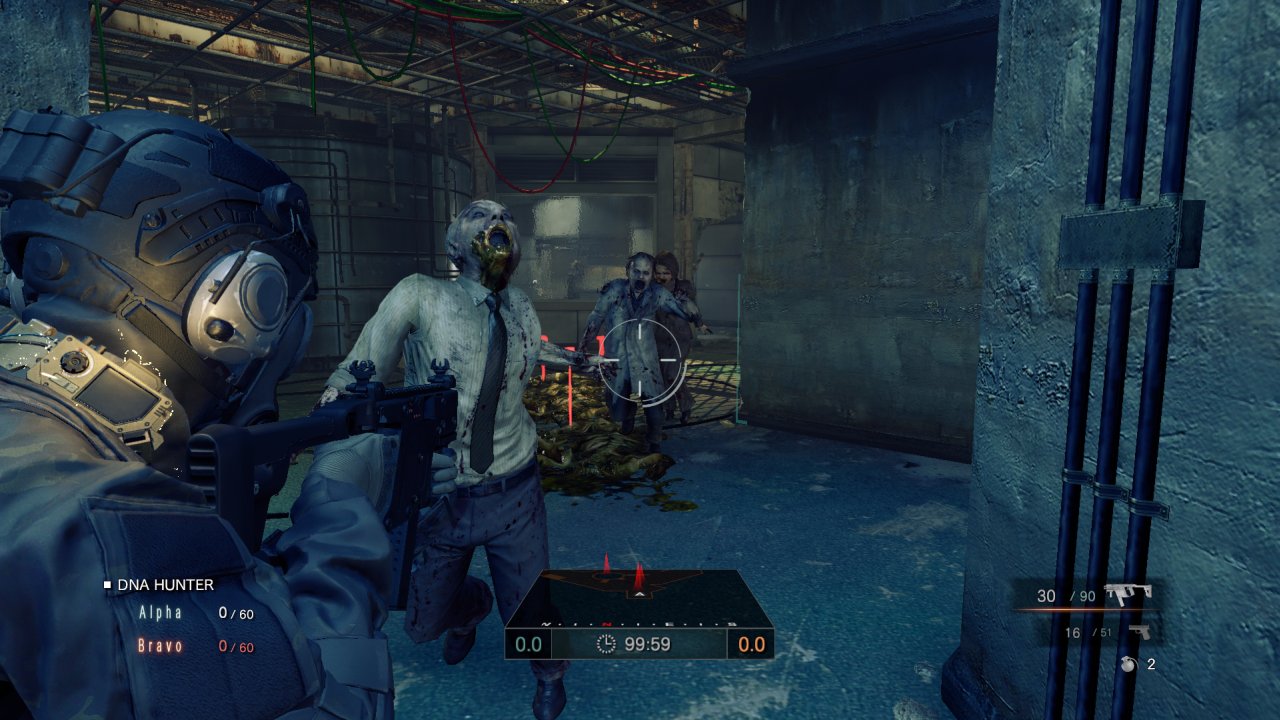 There’s also the option of analog manual control when swinging open doors or leaning out of cover, but it seems unnecessary. The cover system is akin to The Division, constantly highlighting potential areas to take cover in – but why would you want to do this in a game with zombies? It makes a little more sense in competitive multiplayer, but still the mechanic is very poorly executed. What’s worse are the very cramped levels where all the action takes place. There’s barely room to maneuver, and thanks to the poor controls and bad camera position, it all becomes quite cumbersome. The environments are based on notable RE locations, such as the Umbrella Lab, Village from RE4, and Tricell HQ among others. They resemble the original locations with decent accuracy and make Umbrella Corps an unmistakably Resident Evil game.

If you somehow manage to acclimatize to the gameplay and get through the single player, you can try your hand at the main attraction – 3v3 online multiplayer. The small maps are barely able to handle this many participants, and that’s not even taking into the account the shambling undead AI, and the potential for very poor spawn locations. All mercs look rather identical, but there are three different character classes to play as, with some varying upgrade options for gear and weapons. You level up quickly, and there are plenty of customization items to unlock as well.

But these typical design choices are outdone by the inclusion of The Brainer, a standard loadout melee weapon that has a large range and can one-hit kill opponents after charging it up. Think the grappling hook from Uncharted 4’s multiplayer; but the difference here is that, since players can soak up a lot of bullets, running up to someone for a melee strike is as easy as it is effective.

Each player is wearing a device called a Zombie Jammer, which let you traverse the levels without interference from the AI. Opponents can try to shoot that device off your back, thus suddenly turning the local undead against the player. There are other unique aspects – like stomping on downed foes or using a zombie as a personal shield; but these rarely come into play. Speaking of rarely playing, the size of multiplayer population in Umbrella Corps is rather abysmal, just days after launch. 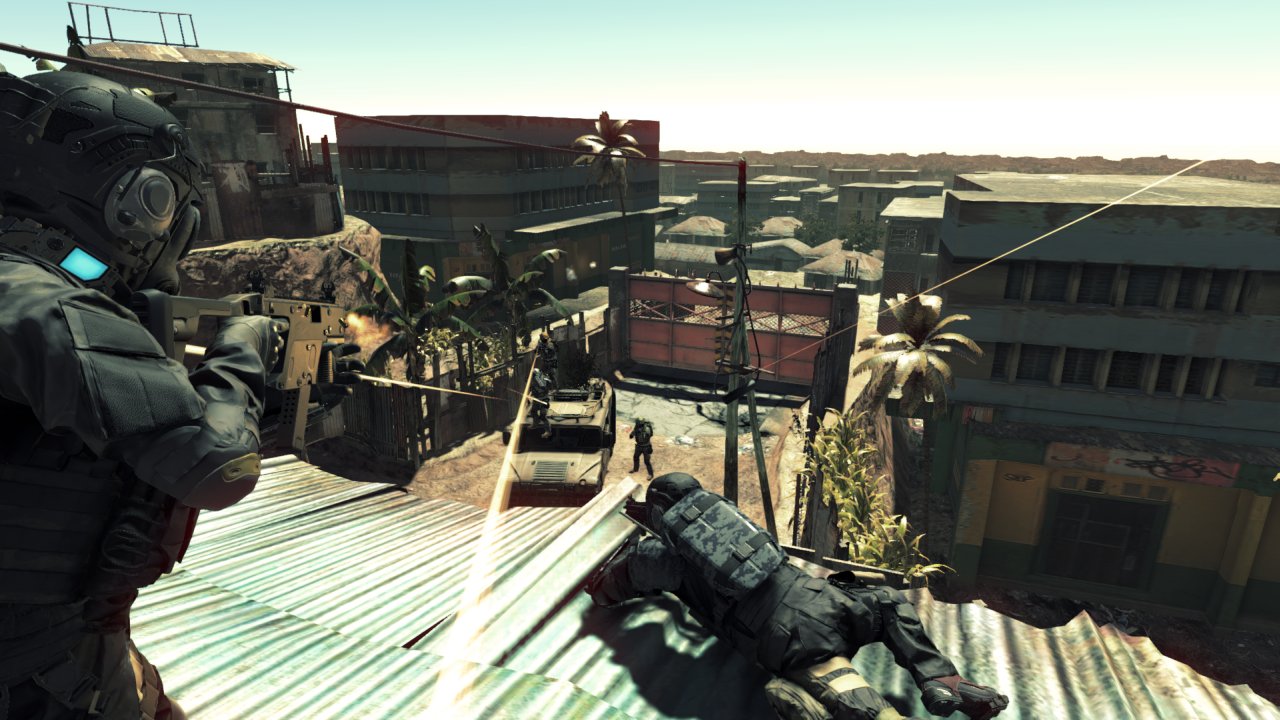 Once you get into a game there are two main modes on offer – a multi-mission cycle of 8 different rulesets (ranging from VIP to team deathmatch), and a one-life deathmatch mode. The latter is a sad affair, with rounds lasting barely a few minutes and everyone being booted back to lobby. What was supposed to be a tense encounter with no respawns ends up being a run and gun while trying to outlast others. There’s just no incentive to really try to survive and work together (like in Counter-Strike or Rainbow Six Siege) since it’s all over so quickly. The multi-mode cycle mode, meanwhile, is a little more involving, not only thanks to constantly different objectives, but also because you get to respawn. None of the rulesets offer anything you haven’t seen in other multiplayer shooters.

Umbrella Corps isn’t a terrible looking game, but it does feel somewhat unpolished and lower-budget when it comes to presentation. The graphics and audio design are on par with what you’d expected from a $30 priced spinoff with a troubled or rushed development cycle. That is to say, it’s acceptable, but could certainly be better. The user interface is needlessly large and obscures more of the screen that isn’t already taken up by your character’s body. The performance on PC is satisfactory, as the game is not overly demanding.

Umbrella Corps marks yet another failed attempt for Resident Evil to branch out. While it may look passable, the poorly designed gameplay mechanics, sluggish controls and lackluster multiplayer options make the game a tough sell. A shallow single player experience and non-existent player populace could very well bury the game on arrival. Unfortunately, this Capcom brand has long lost universal appeal, and Umbrella Corps only solidifies that just because a game is related to Resident Evil, doesn’t mean it is going to be any good.

75
Runs well enough; the UI seems disproportionally large.
Overall
47
Umbrella Corps is unfortunately yet another failed attempt for the Resident Evil franchise to branch out. 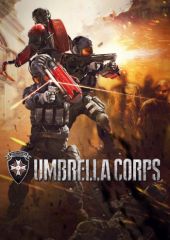 Our Review of Umbrella Corps
47%
Poor
The Verdict:
"A decent looking, but decidedly underwhelming multiplayer-focused spinoff"
Game Ranking
Umbrella Corps is ranked #1534 out of 1605 total reviewed games. It is ranked #135 out of 138 games reviewed in 2016.
1533. Nero
Xbox One
1534. Umbrella Corps

All videos for Umbrella Corps (5)
Advertisement ▼