Despite wonderful environments, the final entry in the franchise is disappointing

Neocore Games have been persistent with their Van Helsing franchise since early 2013. The action-RPG series is practically episodic, with yearly releases that form an overarching story. The original game was decent hack and slash experience with an iconic character and his ghostly companion. Together, they ventured across rolling hills and Steampunk cities to battle enemies including werewolves and twisted machines. The sequel was an improvement in almost all areas, adding more content and refining the components while minimizing repetition. The third game is the last in the series and unfortunately a step backwards from its predecessors.

The story so far is clear, and a potential spoiler if you have yet to complete the previous games. Van Helsing defeated Professor Fulmigati in the first game to prevent him taking over Borgova with electric werewolves and other monstrosities. In the process, he rescued a Prisoner that became a useful ally. Designated Prisoner Seven, this mysterious character helped defeat a General who was determined eradicate all monsters, including removing Van Helsing’s underground resistance group. While their victory was secured in the final moments of the second game, Prisoner Seven had an ulterior motive. He now seeks to tear Borgova apart by merging it with the Ink world, a realm of creation and dreams. Van Helsing must save Borgova one last time.

Once again, Van Helsing is paired with a supernatural siren, Lady Katarina, who helps to lighten the mood and lighten your load. Her ghostly origin story is finally revealed, culminating with a boss fight against a member of her family. Unfortunately much of her tale is told while you fend off the undead rising from graves, making it quite difficult to comprehend as you jostle around reanimated corpses. Her presence is still welcomed, but her character has not developed enough since the introduction two years ago. 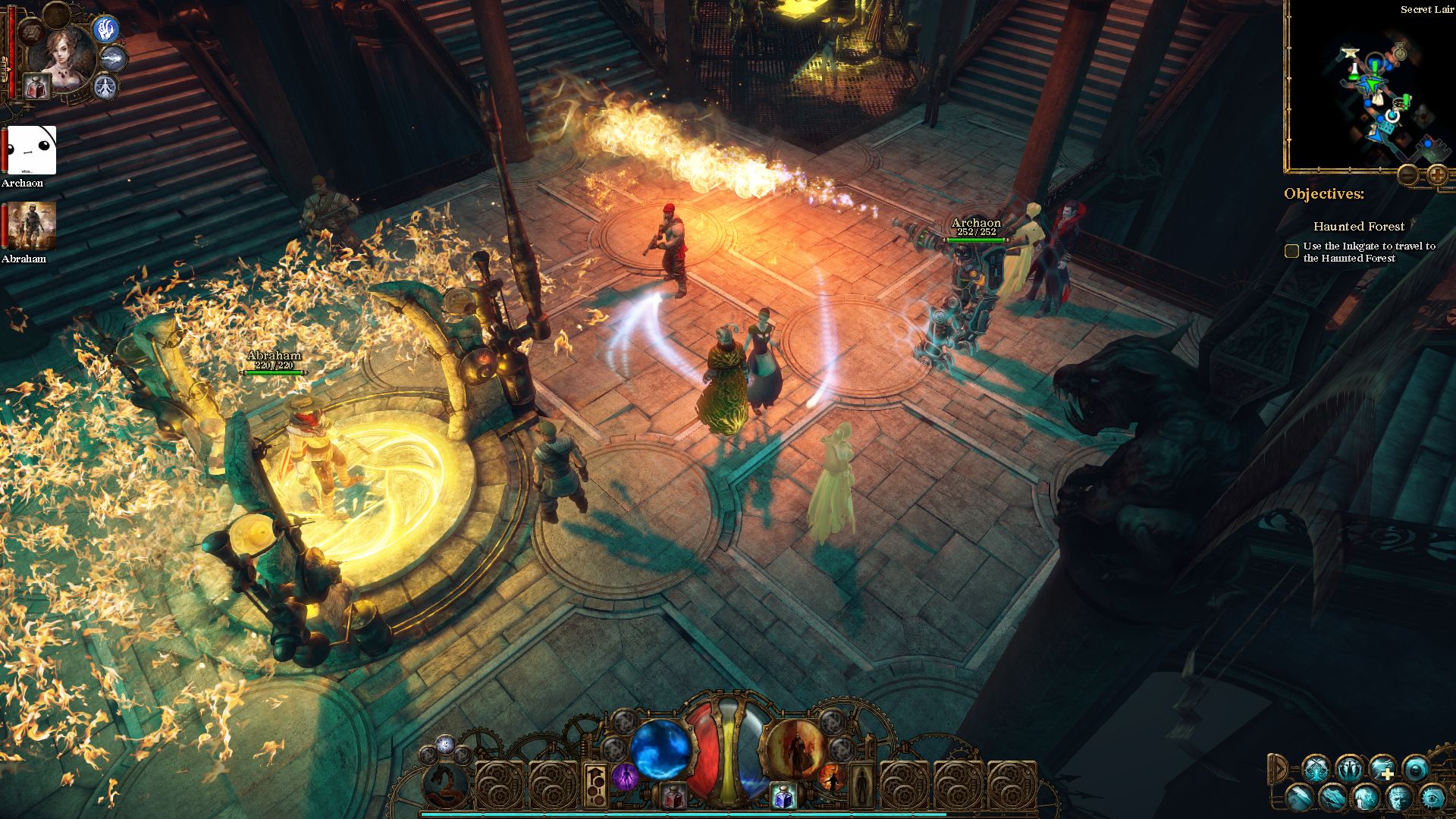 Return to the Secret Lair, so you can set it on fire

The Secret Lair remains much the same as before; it is your base of operations and a place to buy and sell items. There is a new dungeon within the Lair, although it is only used for two small quests in the first chapter. The returning Chimera creature can be sent on virtual missions for shiny rewards, but it can no longer be summoned into battle. The resistance fighters still want to be sent on virtual missions as well, but this task is little more than a time and money sink. The Secret Lair plays a static role and is largely irrelevant for this third adventure.

Much of the story dialogue occurs outside the Lair, told either by gnomes that sound like Sean Connery or monsters that you probably have to kill. Even the main adversary only appears near the end of the game with minimal and predictable dialogue. Side quests are found in the corners of levels, giving you standard tasks such as killing monsters or collecting items, but many are forgettable. While the quests are adequate for a hack and slash game, the overall story is bland considering the build up for the series.

The real star of the sequel, and one aspect of the series that has remained of high quality since the beginning, is the level design. With the Ink world ripping apart the land of Borgova, the designers are able to produce some wondrous vistas. Take a grassy field within the fertile land of Borgova, now imagine it stretched into the sky as it rests upon a tilted slice of world. Moving across these locales is rewarding enough, although the fractured designs may have you longing for their undamaged state. Across the entire trilogy, the levels that will always remain at the forefront of my mind are those with endless fields of green dotted with pine trees and old-world buildings. Some of that earthy scenery has been replicated here in constrained slices, but the satisfaction of exploring them never quite matches their stunning appearance. 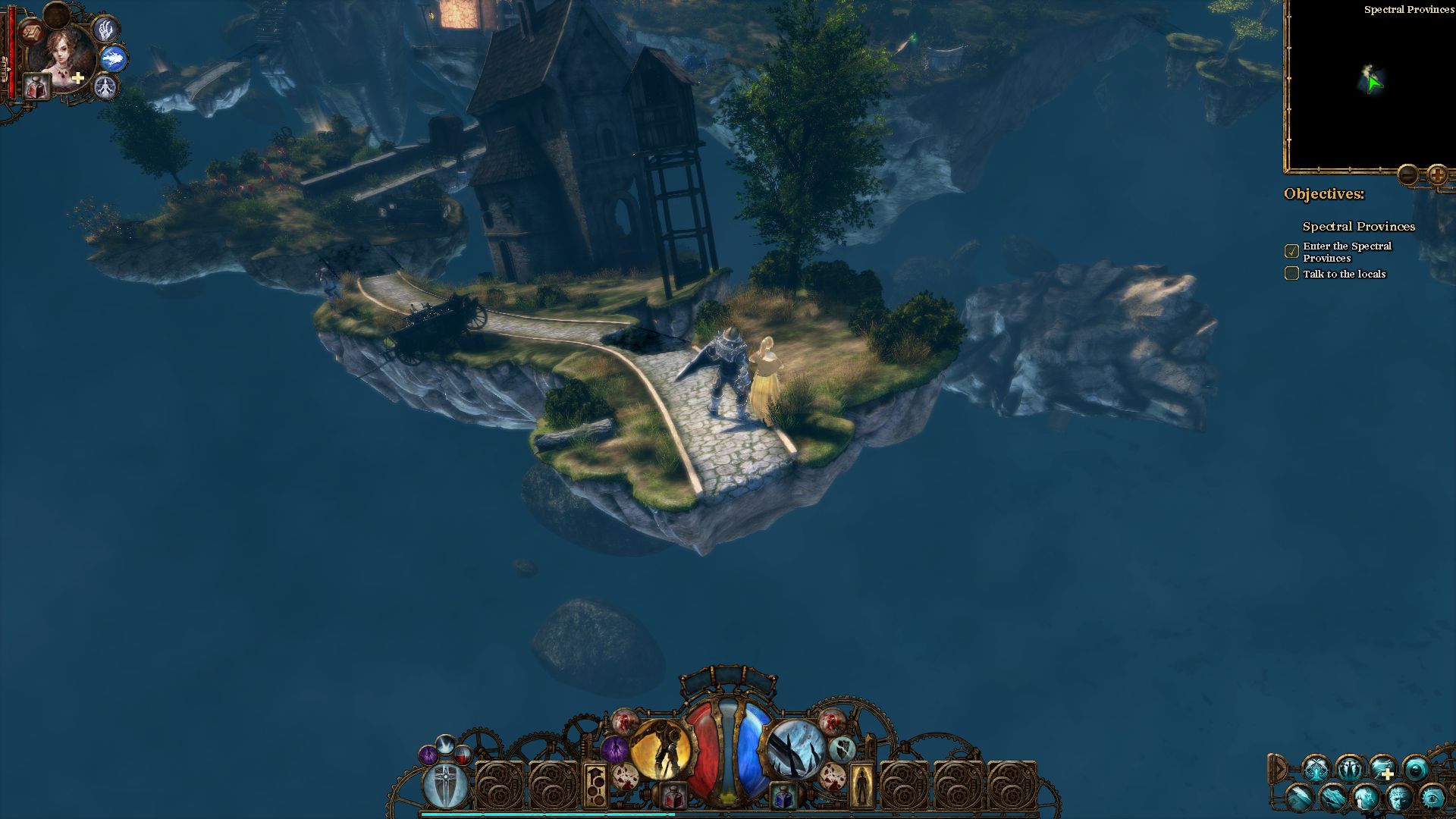 Monsters have been a fantastical positive for the series, and the creative designs return. There are many new foes, including killer clowns and mermaids, with only a handful returning from the previous games. Monsters are placed well throughout the levels, although some areas have clusters of similar groups. Fortunately there is minimal monotony, even when completing all optional side quests. If anything, some monsters from the previous games should have returned and the newer ones could have been used more. In any case, smashing through enemies with your chosen class flows well.

Classes have been overhauled, with six distinct types replacing the three from the last game. The original Hunter has transformed into a Bounty Hunter that can only use ranged attacks. Although initially wearing the iconic wide-brimmed hat, the Bounty Hunter now equips eye-glasses for his unique headgear. For close-quarters sword fights, you will need to select the stealthy Umbralist who is best at hit and run attacks. If you want to become a walking robot, the Phlogistoneer puts you in power-suit that allows you to burn foes with a flame-thrower. Players who prefer synthetic allies might gravitate to the Constructor class, who is able to spawn robotic sentries. Wielders of magic are covered, with an Elementalist that shares many skills with the Thaumaturge class in the previous game. Most of my time was spent with the final class, the Protector; a paladin-like warrior that can block all front damage and retaliate with the stored energy. The Protector wears heavy armor and can stand toe-to-toe with the toughest creatures of the game, assuming you are correctly blocking attacks. The variety between the classes is reasonably good, but there are not a huge number of skills available for each class. 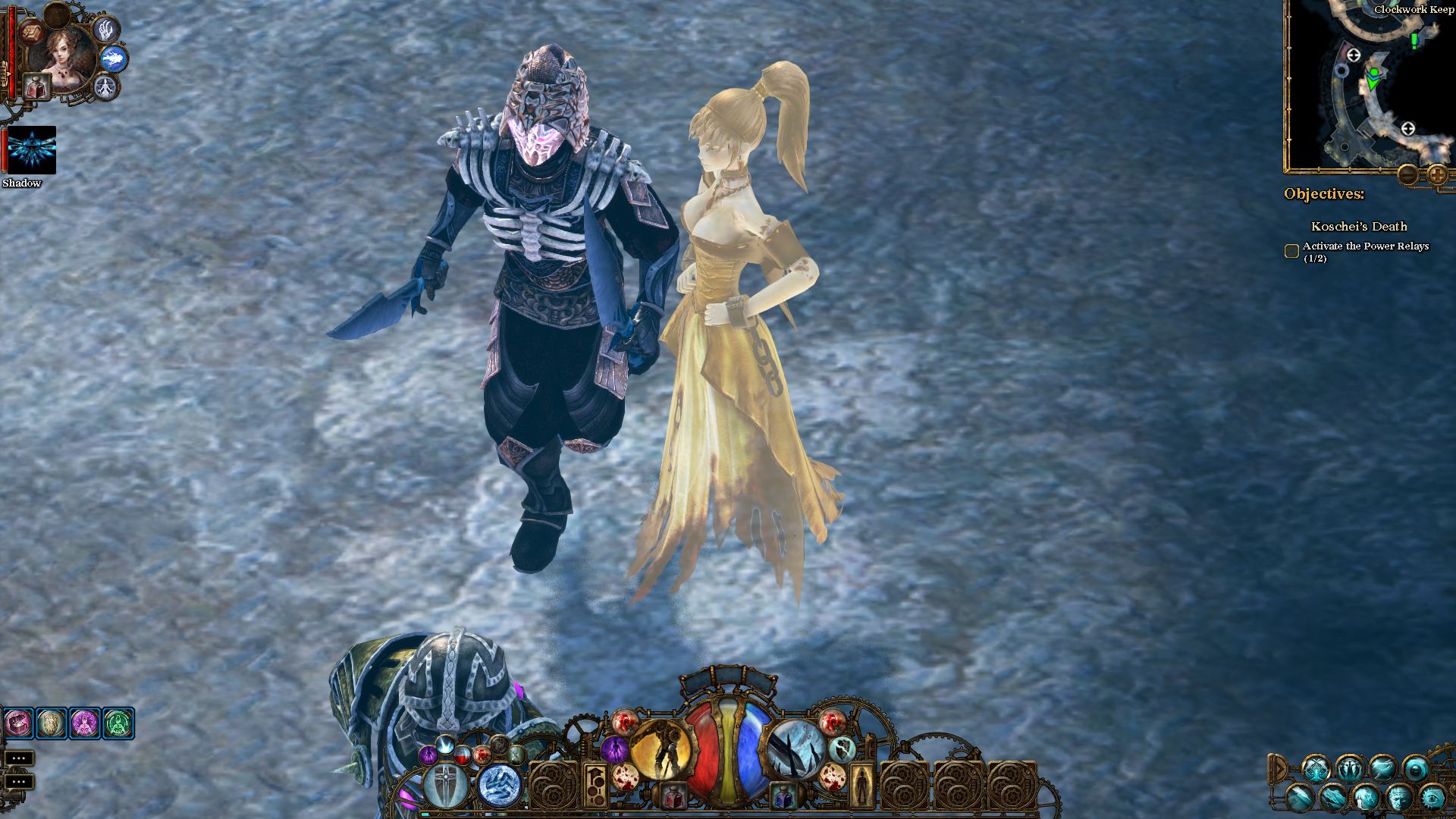 Van Helsing can now be a ninja (Umbralist)

The level cap is just 30, which can be achieved during the 12 hour campaign with time to spare. If you wanted to import a character from the previous game, prepare for disappointment; you must create a new character and will only receive a special ring for your efforts. The loot and progression system is less rewarding in general, as gear swapping is infrequent and starting skills can be used until the end. In my first play-through on Hard, there were too few essence (gem) drops during the first half of the game, limiting item modifications. This muted progress might be related to each class having three unique item slots which may have spread the content too thin. Unless you plan to take more than two classes to the max level, you are going to feel underwhelmed with progress in the campaign.

The side effect of the new classes is that Van Helsing is no longer an iconic character. In the first game, he had a specific visual appearance and combat style. This has been diluted to the point where Van Helsing is merely the voice of a twisted dungeon crawling archetype. Even Katarina is not quite aware of what is happening, as she mentions Van Helsing’s iconic hat despite him wearing a clunky helmet. The class variety costs the game identity and does not add enough in the process. Perhaps the goal was to make the game feel different from its predecessors, but now the main character is no longer prominent.

As with the previous games, you are called back to your Secret Lair on repeat occasions to defend it during Tower Defense missions. Unfortunately there are just three throughout the whole campaign. This compares poorly to the ten or so in the previous game. Aside from the visuals, these missions are worse than the original because there are only a few waves and no bosses. There was so much potential to expand this feature as the series progressed, adding custom waves and changing arenas. Neocore have taken all this potential and built a separate tower defense game, DeathTrap, which was released earlier this year. Such a tower defense system would have served as the perfect end-game content for a game lacking in just that. Instead you have just a few tower defense missions that cannot be replayed without restarting the campaign or venturing online. 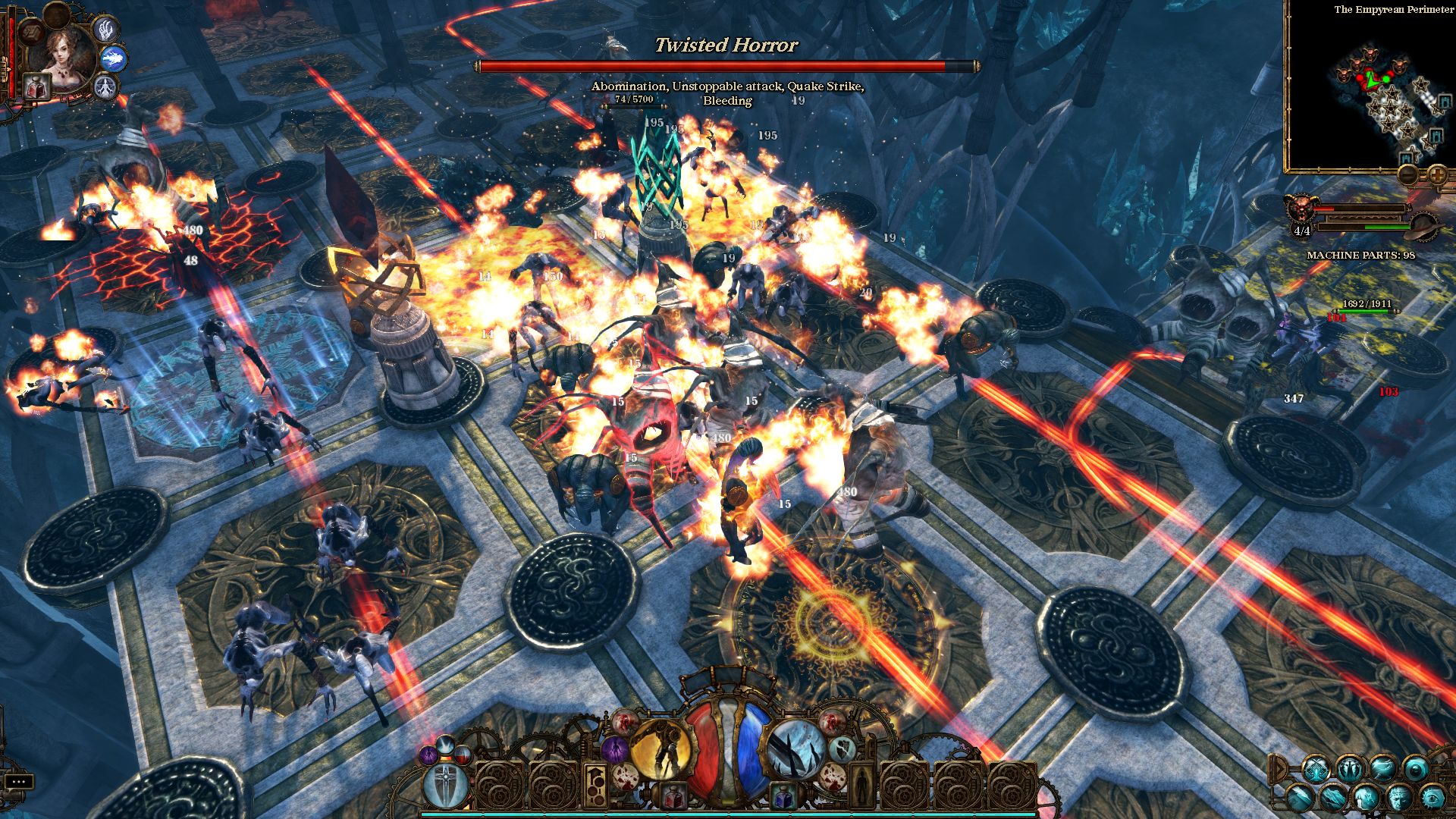 There are not enough of the glorious tower defense missions

Cooperative play is still an option, although multiplayer is too unreliable. There are an abundance of technical issues including server timeouts and loading failures. Other technical problems online include broken elevators, getting stuck inside geometry, characters blocking portals and the dialogue menus freezing. At one point my character became huge and my ally claimed he could not even see my location. Even when the game is playing nice, you might lose sync with the combat that freezes all enemies as you wait 10 seconds for it to resync, or lose connection. When playing online with the Protector class, its special ability rarely worked correctly; failing to register retaliation points even when blocking incoming damage. Network latency made blocking attacks quite difficult and this means harder modes are just too much trouble. While you can still get some enjoyment out of cooperative dungeon crawling, the frequency of interruptions is damaging.

The Incredible Adventures of Van Helsing III is a disappointing conclusion to a trilogy that held much promise. Although not an overwhelmingly bad experience, it has failed to match the heights of the second game, which remains the best in the series. Fortunately the world and monsters remain consistently impressive, almost enough to recommend the game. The iconic character has been diluted to bring class variety that was not required. It is also a shame that the Tower Defense missions and Secret Lair aspects have regressed. Likewise, Lady Katarina is a ghostly companion that never quite met her potential in the trilogy. Numerous technical issues make the game difficult to recommend for cooperative play, and some single player bugs add chinks to the flawed armor. The final game in the Van Helsing saga is the victim of the success of its predecessors, and it should have been so much more.

Our ratings for The Incredible Adventures of Van Helsing III on PC out of 100 (Ratings FAQ)
Presentation
82
New monsters and wonderful locations are complemented by good music.
Gameplay
69
Six new classes result in a lost identity for the main character. Class balance is a little messy and there are not many skills for each class. Action is still enjoyable. Not enough tower defense missions.
Single Player
68
Concludes all relevant story threads in a subdued 12 hour campaign, but fails to utilize characters or the Secret Lair effectively. Campaign flows well though, with some decent side quests.
Multiplayer
48
Technical issues are disruptive and frequent. You will have to quit games when you encounter game-breaking bugs, unless the game crashes before you get the chance.
Performance
(Show PC Specs)
CPU: Intel i5 3570k
GPU: Gigabyte 7950 OC 3GB
RAM: 8GB DDR3
OS: Windows 7 Ultimate 64-bit

75
Runs well in heavy action with only a few slowdowns. Foreground objects can still occlude the combat. There are some quest bugs, but nothing preventing game completion.
Overall
67
With Van Helsing III, the franchise stumbles at the final hurdle, failing to capitalize on ideas from its predecessors and even regressing in some areas. While still a competent action-RPG, it is a disappointing finish to a good series. 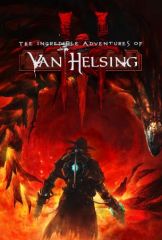