War always takes its toll; this time the price is too high

Earlier this year Relic did a fantastic job of fleshing out the multiplayer side of Company of Heroes 2 with the Western Front Armies expansion, which brought the US forces and Oberkommando West into the ongoing fray. Now they are looking to bolster the singleplayer side of this increasingly DLC-laden RTS, but their attempts at creating a campaign for the US is less successful than their multiplayer expansion. Ardennes Assault has some good ideas that are new to the Company of Heroes series, like a grand-campaign map, randomly generated mission objectives, and aspects of your army that carry over between missions. However the size of the campaign is surprisingly small given substantial asking price for the expansion, and I couldn’t find a good difficulty level that let the expansion’s bolder design choices come into play in a meaningful way. 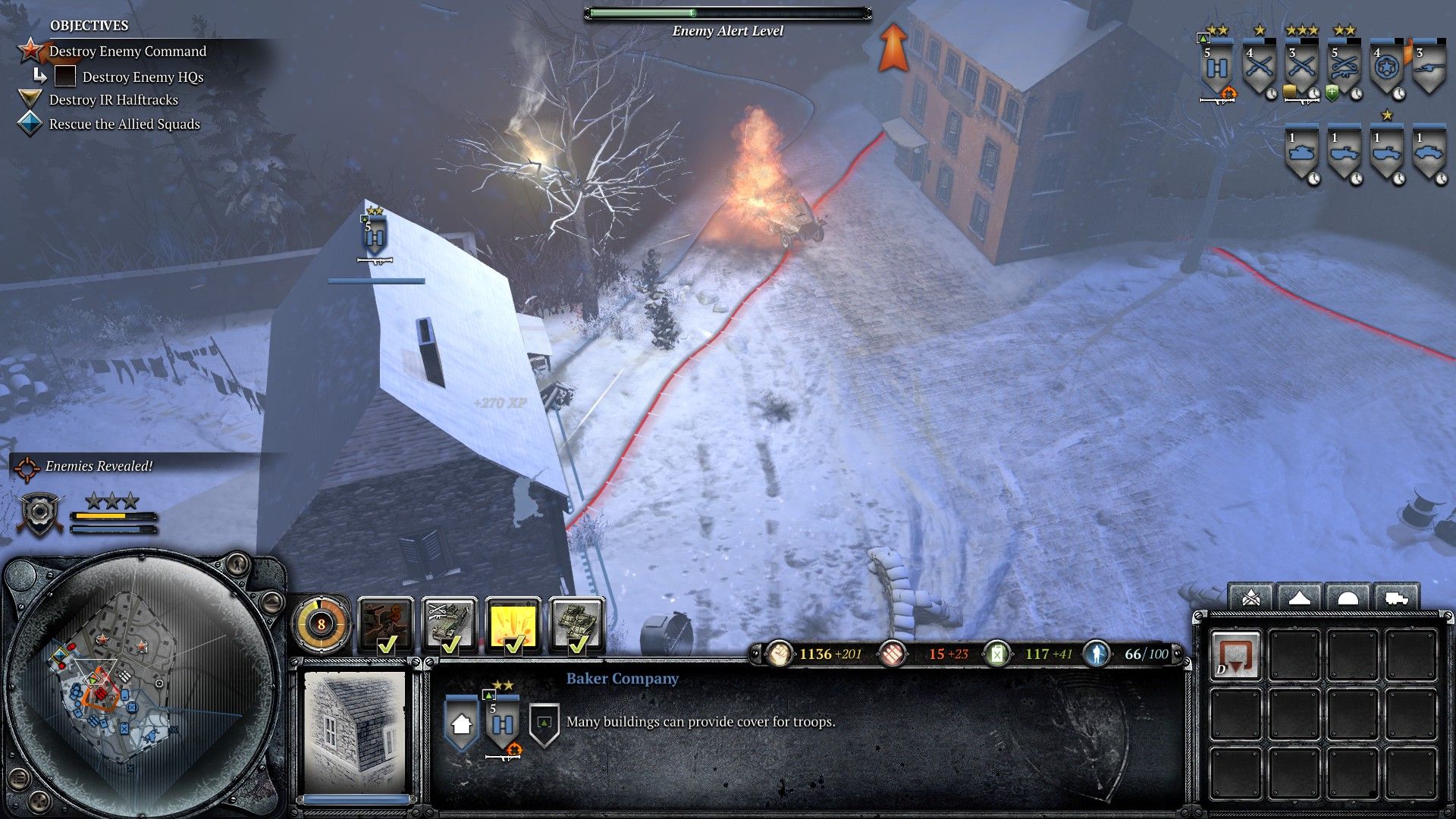 While Company of Heroes 2’s original campaign saw you throwing masses of conscripts at enemies with little regard for unit preservation, Ardennes Assault requires you to move more slowly and try and keep your units alive. After a few introductory missions, you get to move three different companies around on a sort of grand campaign map somewhat akin to that in Dawn of War 2. Each company can be separately upgraded, but also have separate strength and veterancy levels. When you complete a mission with a company, their veterancy increases but their strength goes down in correspondence with the losses you sustained during the mission. If a company gains enough veterancy they will be granted bonuses such as better starting units and increased experience on unit call-ins. However reinforcing a company will reduce its veterancy, and if a company’s strength falls to zero, you can no longer use them.

To increase the stakes, you only have one save file to work with, meaning if you screw up badly, you have to restart the entire campaign. These design elements are fairly unique for a RTS, and they could have made this expansion tense and highly replayable in the same way X-com: Enemy Unknown or Faster Than Light are. However, these design elements never really came into focus for me, mostly due to the limited difficulty options and predictable AI. On normal, I never ran into trouble or failed a mission, breezing through the campaign in less than ten hours. Upping the difficulty to hard however turned the missions in messy, frustrating affairs. Instead of using more sophisticated unit combinations and better unit positioning, the game simply throws more enemy units at you. This means that the unit preservation Ardennes Assault tries so hard to promote is almost impossible as chaos explodes in many of the campaign missions. 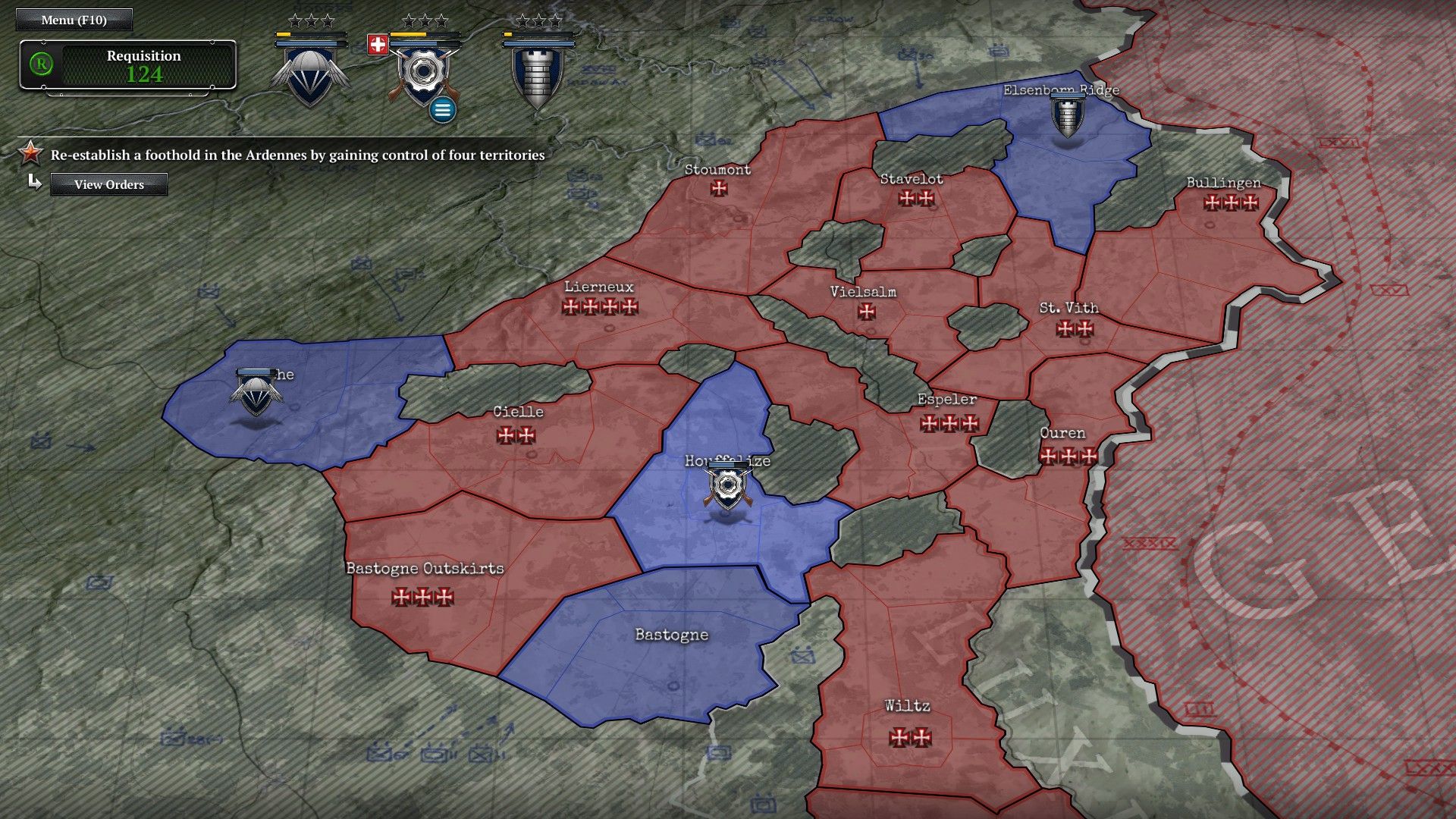 As a result of this uneven difficulty between settings, the campaign never develops the kind of tension and stakes you get from other titles that employ these kinds of design choices. On normal, the enemy AI was not very fun to play against, as they only ever seemed to build a small selection of infantry and light vehicles, rarely making use of the Oberkommando’s more interesting units.

Depending on the location of the territory you are attacking, you might be faced with a traditional scripted mission or a randomly generated victory-point skirmish with unique objectives. The story missions are generally well designed, with one atmospheric stealth-focused level that has you flanking searchlight half-tracks being the only real standout. Other missions are more typical Company of Heroes fare like defending a large church or assaulting a heavily fortified town before fending off a counter-attack. The randomly generated levels aren’t as interesting, with the standard victory point rules being changed up with random variables like having to capture all three locations in order to drain the enemy points. Many of these missions are forgettable and only serve to pad out the expansion’s already dubious length.

When you capture a territory, the remaining enemy will scatter to nearby connected enemy territories on the grand map, making those territories incrementally harder to take over. There isn’t much strategy on the campaign map beyond isolating difficult territories before attacking them so their escaping troops can’t make it back to and reinforce other German territories. Choosing which company to use in which mission can make a difference, but on normal the difficulty is low enough that any company is quite capable of success. Random events occur every now and then that will increase or decrease company strength or experience, but these are of limited consequence. 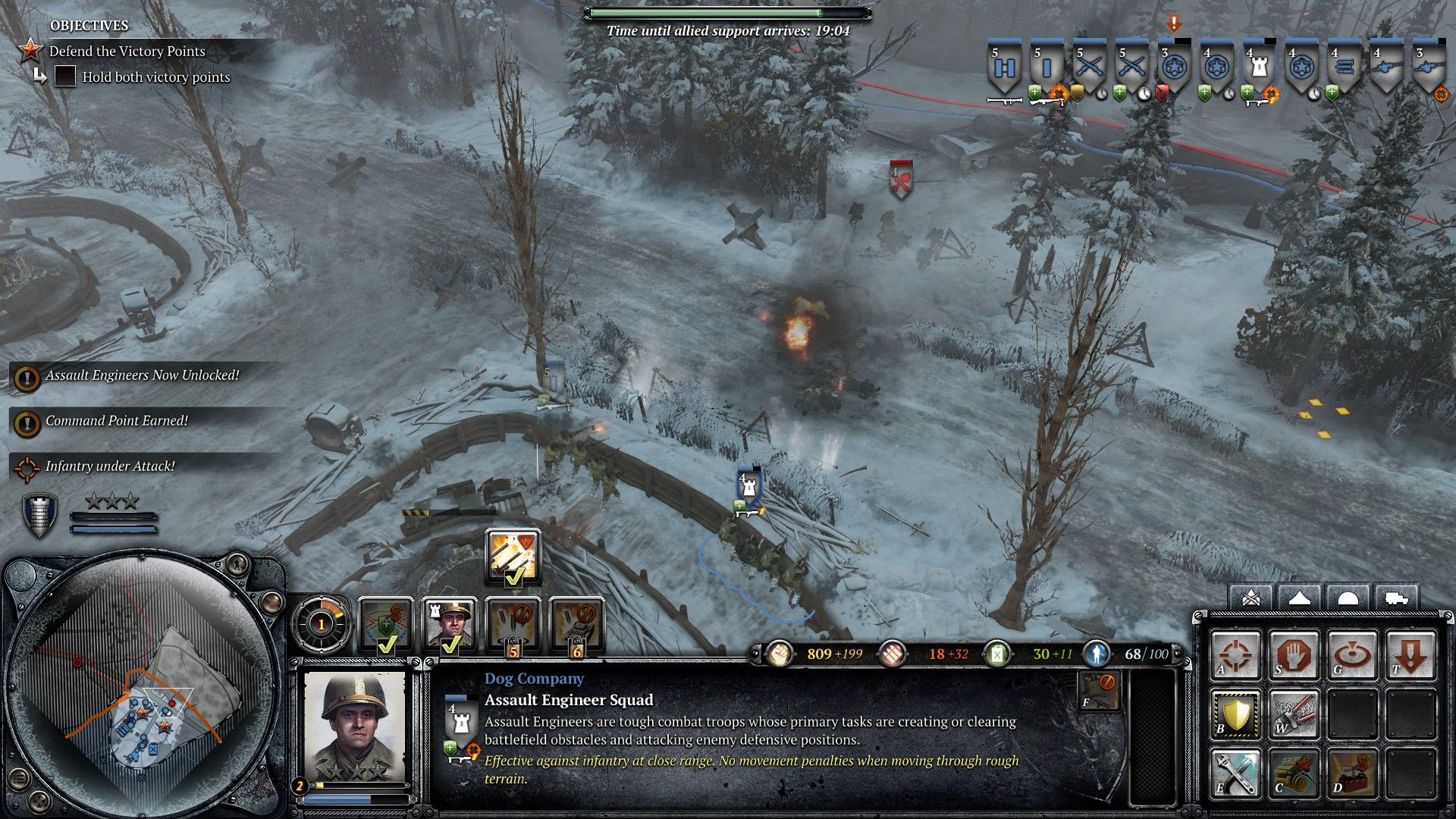 Playing as the US Forces here is much like playing them in multiplayer; they are a scrappy, infantry focused faction with an insatiable thirst for munitions. For whatever reason the units available to the USF are a bit different than those the faction uses in Multiplayer; they have access to a standard mortar for instance, while the Jackson and Flack-halftrack, two of their most interesting units in multiplayer, are largely MIA in Ardennes. Since the campaign covers the Battle of the Bulge, the excellent snow technology that has faded from the multiplayer scene is in full effect here, although blizzards have been removed and as a result you don’t need to worry about keeping your troops warm. Deep snow and fragile ice do come into play however and remain an interesting dynamic in what is already a very complex game.

One thing that Ardennes Assault does get right is atmosphere. The excellent sound design and unit dialogue that is easy to overlook in chaotic multiplayer matches can be more easily appreciated in the slower, more tactical missions that are common in this campaign. Each location has a different, newly designed level associated with it, and they are all packed with visual detail and all have lots of flanking routes, buildings and forests to allow for careful flanking maneuvers. 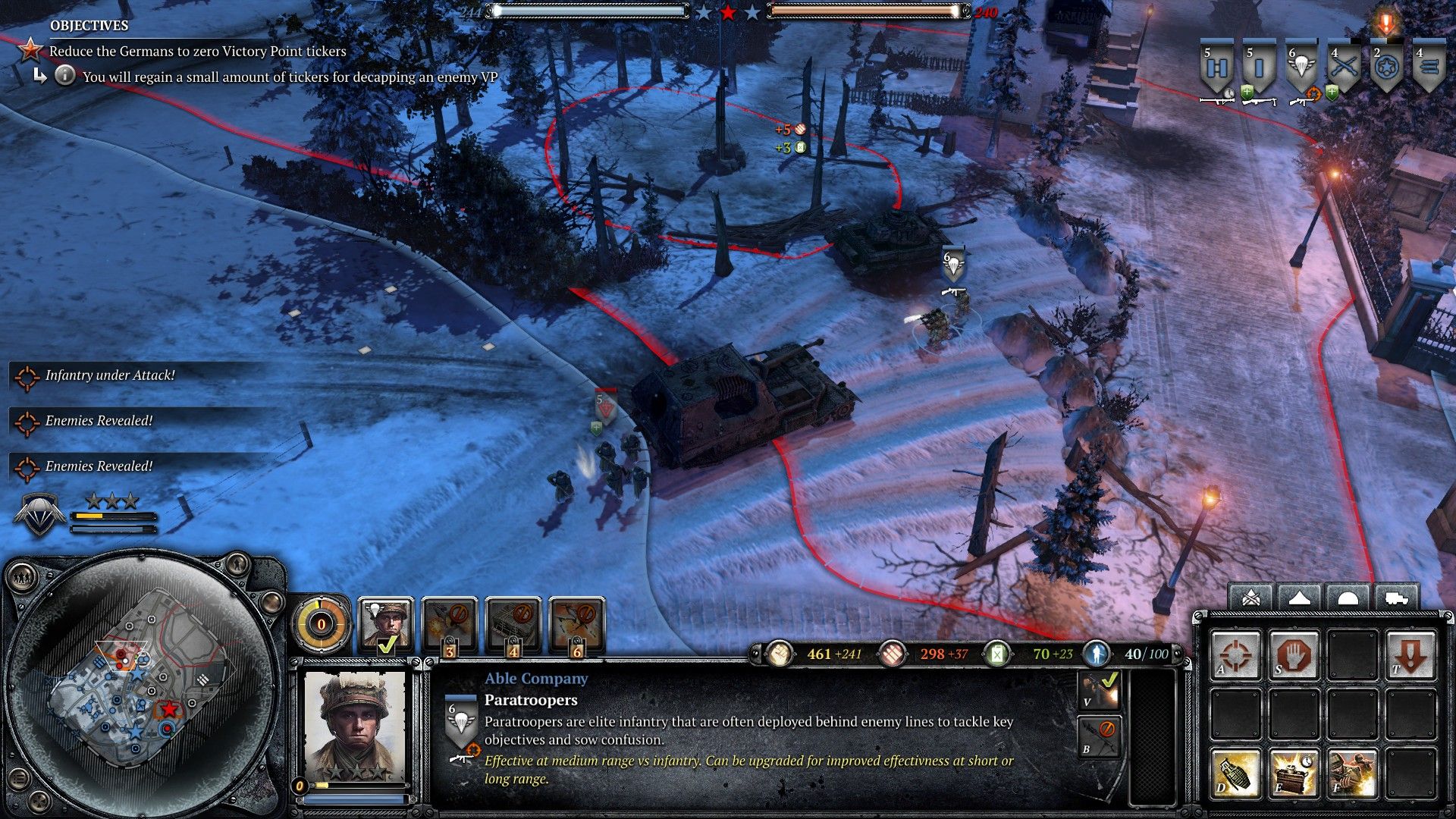 As a result of the high price tag and issues with difficulty levels and enemy AI, I cannot recommend Ardennes Assault at its current price and in its current state. If Relic manage to tweak the enemy AI to behave more dynamically on Normal Difficulty or to make hard less of a frustration, the rogue-like design elements would really shine, replay value would sky rocket and the campaign would be well worth picking up on sale. For now, I would advise trudging past this expansion and on to the multiplayer battlefields.

Our ratings for Company of Heroes 2: Ardennes Assault on PC out of 100 (Ratings FAQ)
Presentation
80
The new levels are atmospheric and the campaign-specific voice acting is reasonable; the sound design and unit-chatter remains the star of the show.
Gameplay
75
Predictable enemy AI hamper the otherwise rock-solid gameplay of Company of Heroes 2, the new levels are well designed with lots of flanking opportunities.
Single Player
50
Some interesting ideas are inconsequential on normal difficulty and very frustrating on hard, length is fairly short given the price and replayability is limited due to difficulty and AI problems.
Multiplayer
NR
None
Performance
(Show PC Specs)
CPU: Intel i5-2500k @ 3.3ghz
GPU: EVGA GTX 670 FTW 2GB
RAM: 8GB DDR3
OS: Windows 7 Ultimate 64 bit

75
The snow effects can cause slowdowns although the game ran consistently well once I lowered the settings slightly.
Overall
65
Company of Heroes 2: Ardennes Assault has some good ideas and atmospheric levels but the ludicrous asking price, lack of difficulty balancing and problematic AI leave this expansion out in the cold. 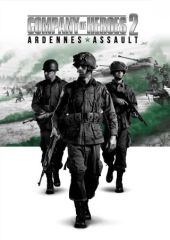 All videos for Company of Heroes 2: Ardennes Assault (2)
Advertisement ▼