Also known as: CoH 2
Company of Heroes 2 moves the battle away from the common Western Front focus of World War II and refocuses on some of history’s most brutal and devastating conflicts on the Eastern Front. Your military tactics hold the power to tip the very balance of this conflict. Engage in tactical combat that will define you as a military leader and wield the might of the Soviet Empire as you smash your way to Berlin.

Company of Heroes 2 Screenshots (10)
View All

Company of Heroes 2 Videos (4)
View All 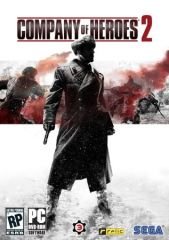