One year and many, many balance/small content updates later and it is time for the first real expansion to our 2013 strategy game of the year, Company of Heroes 2. While CoH 2 had a good amount of high quality single player content, the multiplayer is where it really shone, and apparently Relic agrees as the long awaited expansion is completely multiplayer focused. Two new factions have been added to the game; the scrappy US forces and the lumbering Oberkommando West (henceforth the OKW). In addition to these new armies, the progression and unlock system for the entire multiplayer component has been overhauled, and a custom battle list has been added. 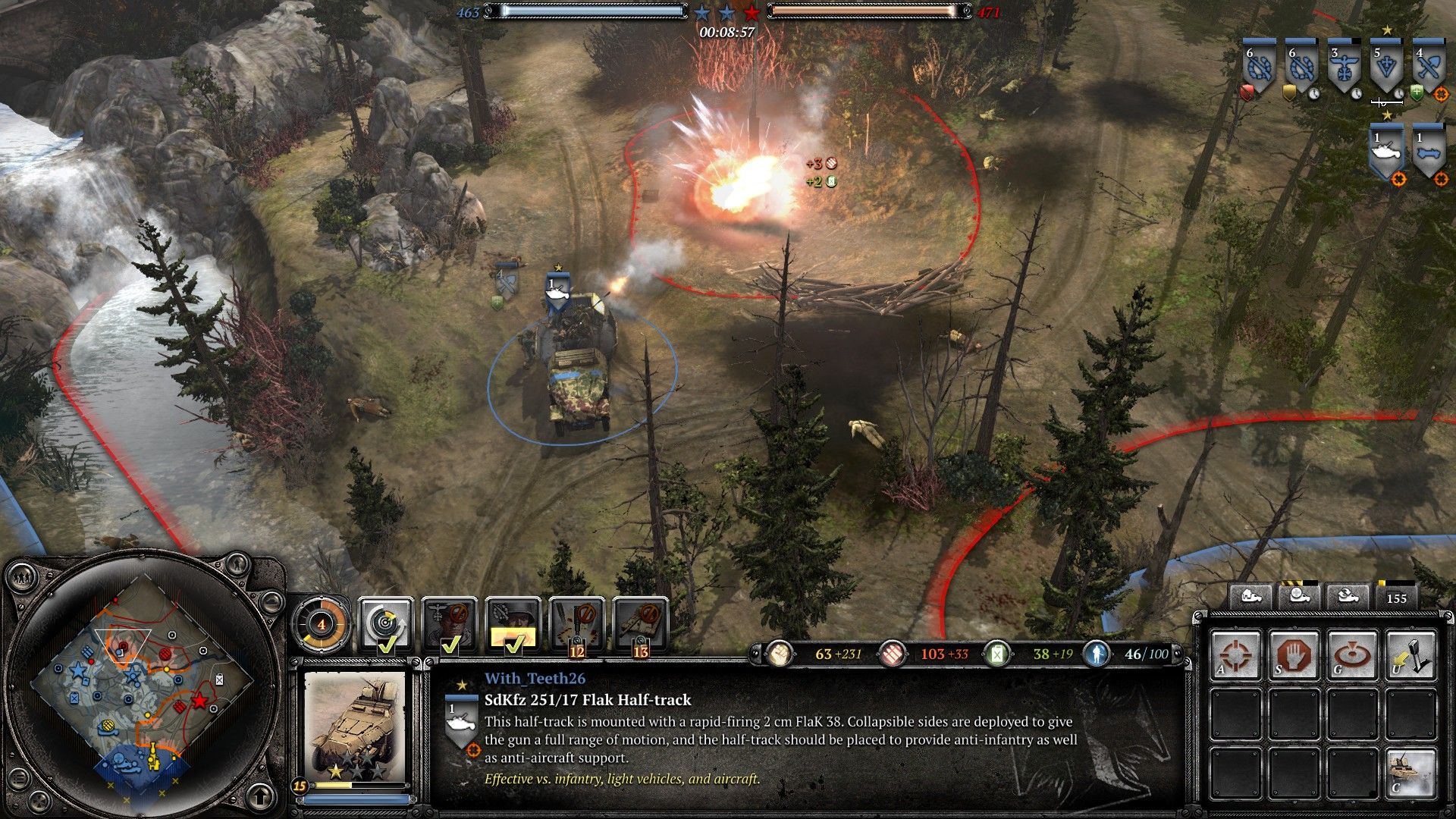 When I first heard about the expansion, I expected the new armies to basically mirror those found in the first Company of Heroes, which saw the US and Germans facing off in Western Europe. Having played both of the new factions for a significant period of time, I can safely say that this is not the case. Both of the new factions feel fairly unique from anything we have seen in the series so far. The US focuses on cheap, versatile infantry, no building costs or base building and light to mid tier vehicles which play more of a supporting role. The OKW are built around mobile base structures and a variety of specialized vehicles supported by infantry.

Mobility and flexibility are the name of the game when playing as the US; you start each match with your entire base already established and must call in different officers in order to gain access to the units these buildings can produce. It is easy to flood the field with infantry early on thanks to this, resulting in a strong early game ability from this faction. You can purchase weapon racks of Bazookas and BAR's so that any of your infantry, or even team mates, can grab whatever weapon the current situation calls for. One of the default commanders lets you call in airborne troops along with equipment like heavy machine guns and Anti-Tank guns, further adding to the maneuverability of the US. However the longer a game goes on, the more the US struggles as heavy tanks start to emerge from the German teams.

The OKW are in many ways the opposite of the US; they gain their power from a large variety of heavy vehicles supported by a small variety of elite troops. Somewhat akin to the British in CoH 1, the OKW's main structures come in the form of trucks which can be set up anywhere on the map. Setting up these structures near the front lines can be advantageous; one structure heals and reinforces troops while another has a powerful flak cannon on top. However you also risk losing the building if you set it up too far forward, and you only get a set number of the trucks that show up throughout a match. If you lose truck, you will have to fight with a reduced amount of unit options. 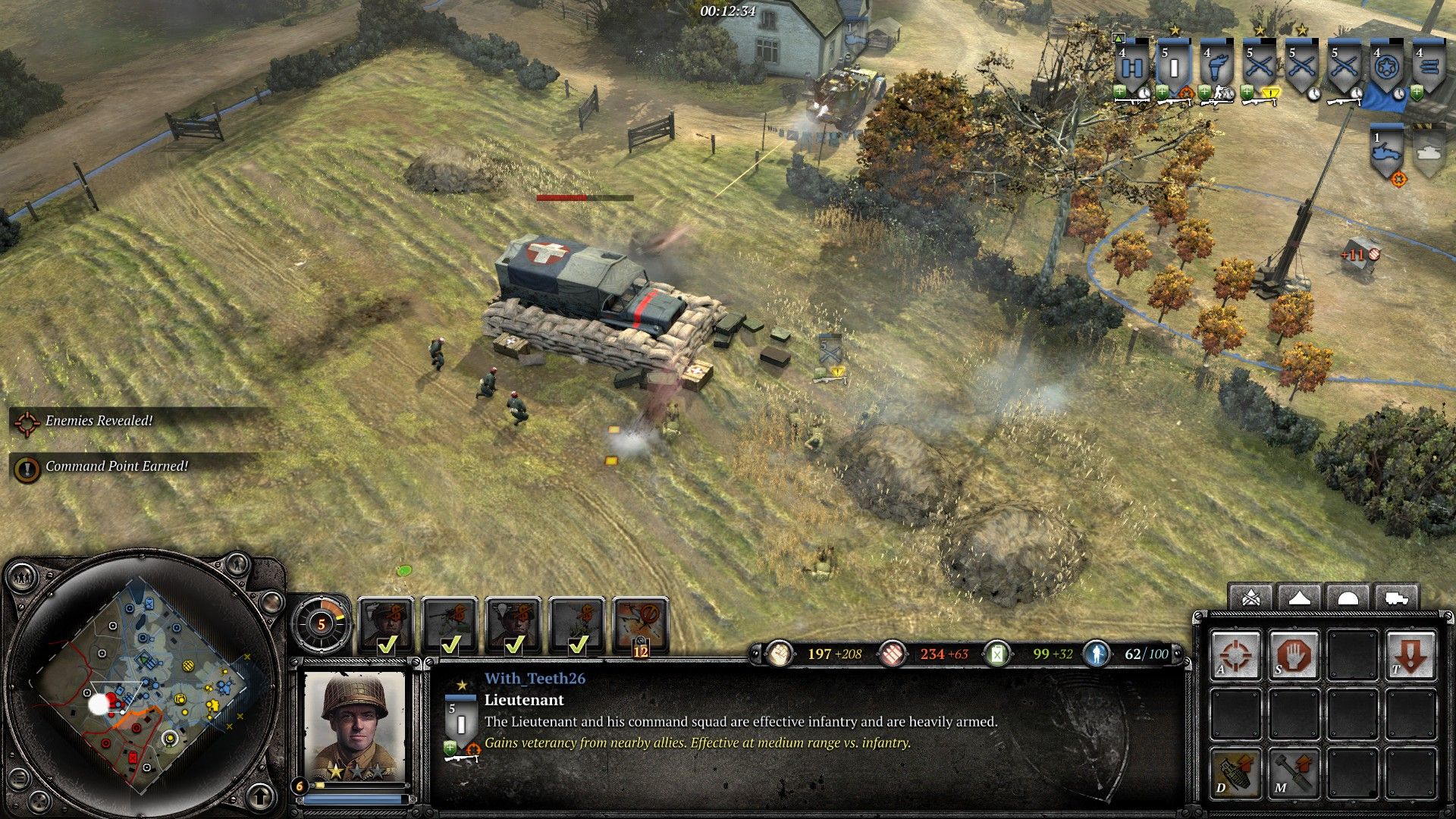 Apart from the HQ building you start with, you gain access primarily to a variety of vehicles ranging from a variety of half tracks to the King Tiger that every OKW player can build from their HQ late in the game. One vehicle fires a massive 380mm rocket which will destroy everything in a small radius, but it takes over a minute to reload and cannot move while reloading. The OKW are at their best later in the game once they have established a foothold on strategic points with their heavy tanks pushing back allied counterattacks.

One significant disadvantage the OKW have is they cannot build fuel or munitions caches. They can however salvage fuel from vehicle wrecks and use one of their base structures to convert munitions into fuel. The lack of fuel income can be problematic for a faction that relies so heavily on vehicles, and means that if the Allies gain map control early on, they can start rolling out tanks well before the Germans. The new factions seem reasonably well balanced thanks to this, although it feels like the US might be lacking in durable anti-armor solutions late in the game, as they are the only faction that have no heavy tanks.

While you need to drop twenty dollars to play as these new factions, many of the changes that have been made with the expansion will apply to owners of the original game as well. The way you unlock skins, commanders and bulletins have been changed; all three army customization items come as random drops you get after completing games. This system has its ups and downs; before you always knew where you stood as you progressed towards specific bulletins and commanders, but now you have no control over what you get. On the flip side, you have the chance to get commanders which were previously only available as paid DLC. The current drop rate seems a bit low, and the fact you can get duplicate items is a definite issue, but it's good to see the developers addressing the issue of commanders that are locked behind microtransactions. 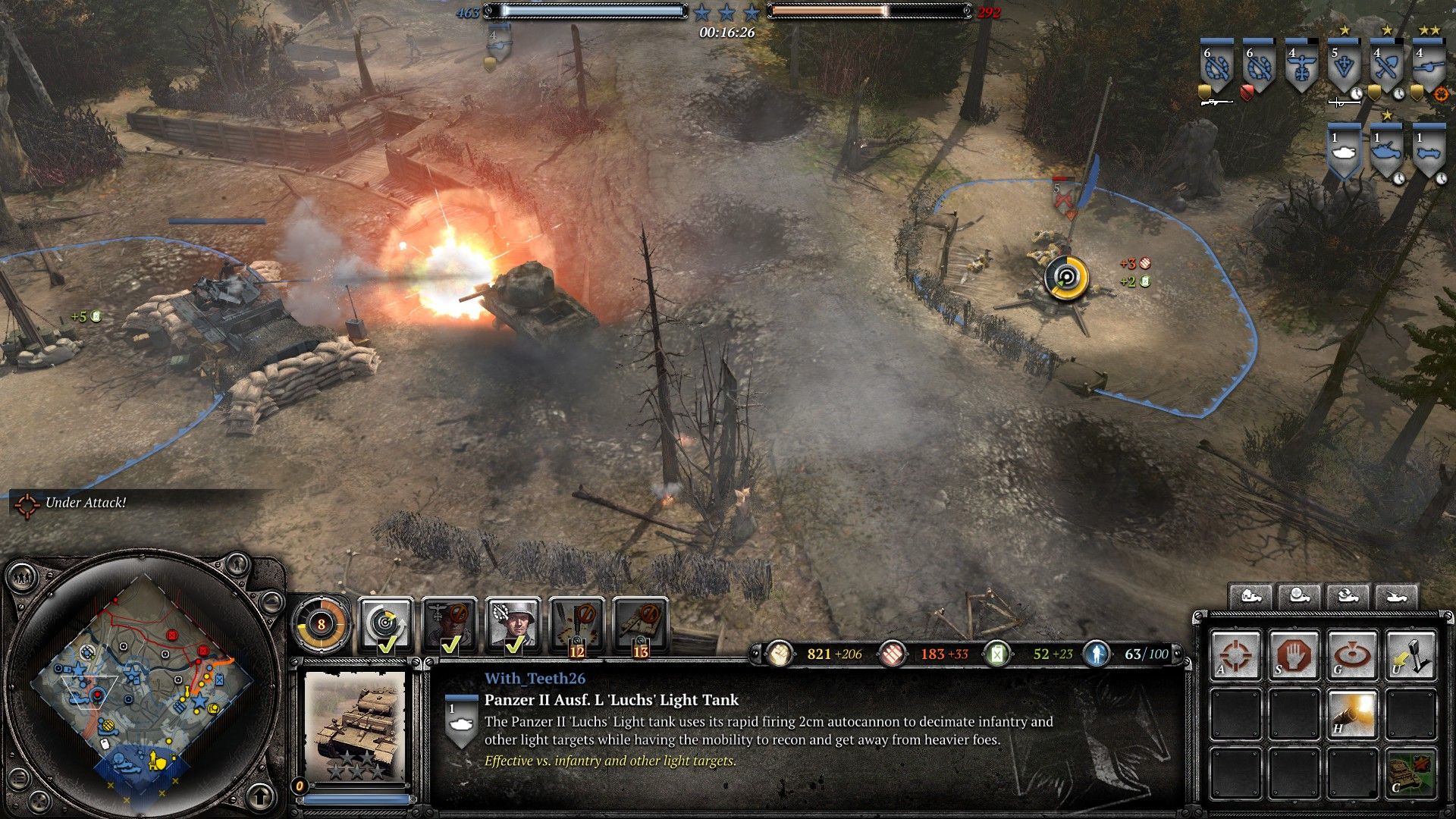 A good number of new maps also came out in this update for all to play, although they are all set in the Western front and do not make use of the excellent snow technology we saw last year. The result of this is that existing snow maps come up less in automatch rotation, so you will spend less time dealing with blizzards, thin ice and deep snow banks. While some might be glad for this change of pace, I personally enjoyed the tactical opportunities that the snow opened up and am sad to see the focus pulled from it, although that is not to say the new maps are bad as I have had enjoyable games on all of them. One map features verdant green fields which make for a nice change from the brown and white of most CoH 2 maps. Another good addition of the new update is a public game list allowing you to open up a lobby and let random people join. Previously you could only create custom games when playing with friends, so this is a good addition that should help keep the multiplayer thriving.

Even if you don't end up buying The Western Front Armies, you will be fighting with and against them which will allow for new strategies and more varied gameplay. I was personally getting a bit tired of Soviet vs. Ost Heer games, and these new armies will greatly mix up how multiplayer matches play out. If you don't have Company of Heroes 2, you can buy one of the new armies for 12 dollars and this will grant you access to the multiplayer, which is a good way to see if it is something you would be interested in. If you have been looking for a reason to get back into Company of Heroes 2's multiplayer, the Western Front Armies update should be more than enough incentive, even if you don't buy the new factions.

Our ratings for Company of Heroes 2: The Western Front Armies on PC out of 100 (Ratings FAQ)
Presentation
80
The game looks and sounds much the same as it did last year; the new menu interface for army customization does take some getting used to however.
Gameplay
90
The new armies are fun to play and add interesting new dynamics to multiplayer matches.
Single Player
NR
None
Multiplayer
87
The new armies are reasonably well balanced, and the already excellent multiplayer is made better with the inclusion of custom battle lobbies open to the public.
Performance
(Show PC Specs)
CPU: Intel i5-2500k @ 3.3ghz
GPU: EVGA GTX 670 FTW 2GB
RAM: 8GB DDR3
OS: Windows 7 Ultimate 64 bit

75
The battleservers Relic implemented several months back have fixed most of the lag in online games, although the frame rate can struggle when the action gets intense.
Overall
82
The addition of the US and OKW armies pump fresh blood into the already enjoyable multiplayer of this outstanding WWII RTS. 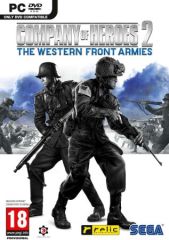 All videos for Company of Heroes 2: The Western Front Armies (3)
Advertisement ▼