First-person shooters do tend to splurge out a bit when it comes to weapon variety, wouldn't you say? Well of course you'd say that, you insightful devil, you. How can one gun hope to carry a game when they so often amount to little more than 'point and shoot'? This isn't Devil May Cry over here; you can't parry a gun. You can't cancel out of a gunshot. You can't really learn new moves for a gun either, at least not while the only move that matters is 'hold right click, point at morally-objectionable target, then left click'. Most first-person shooters need a steady IV drip of guns just to keep the player from lapsing into a waking coma. Yet every now and then a game comes along that really knuckles down with just a single creative weapon, and the results are almost always fascinating. To this day my favourite Half-Life 2 chapter is still “We Don't Go To Ravenholm”, the spooky mining town that was practically just a giant playground to explore the full destructive potential of the Gravity Gun, and I'm more closely familiar with Receiver’s ultra-interactive M1911 than I am with the backs of my own hands. Seriously, I don't remember these lumps being here yesterday. Heavy Bullets lives in the same vein, concentrating on a single weapon with a unique mechanic, and as such we get the deciding question: does the game really have a tight focus? Or is it merely emaciated? 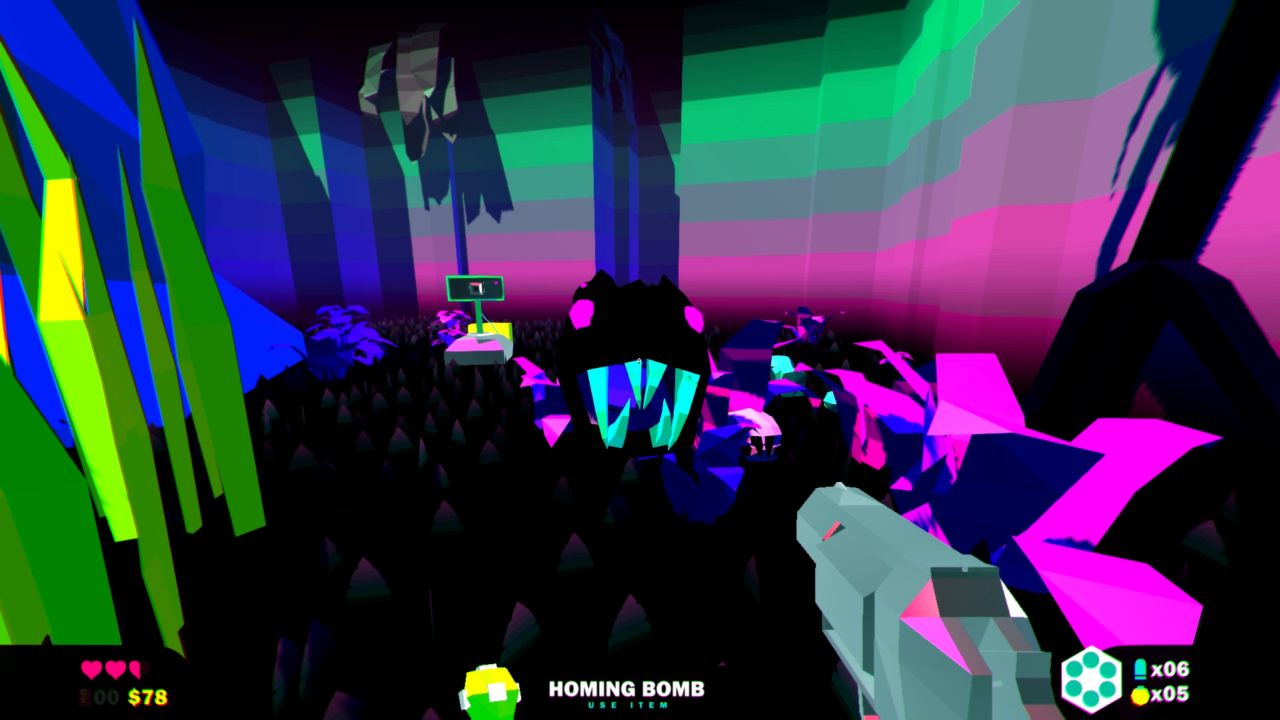 The premise, at least, is disarmingly simple. You have to fight to the top of a building infested with monsters and haywire security systems with the aid of one gun; a revolver. It holds six shots. Ammo pick-ups are extremely scarce, and while your gun possesses the fabled powers of instagib - normally only granted to glowing purplish energy rifles for some reason - there are most definitely more than six foes between you and the end of the game. So what can you do? Only one option presents itself: rifle through your enemies' shredded remains, recover the fully-intact bullets, put them back in the cylinder, and go on using them, of course. Leaving aside the knowledge of the kind of state a bullet is actually in after it hits anything even remotely solid - something instilled in me by a thousand slow-motion MythBusters clips - it's a surprisingly nuanced mechanic. Oh, sure, there are plenty of shooters where ammo conservation is key, but ultimately you're just trying to trade bullets for progression with maximum market efficiency. Knowing that you have to recycle the same ones over and over again brings up some interesting considerations that make choosing your shots extra-difficult. You can't even blast an enemy into polygonal kibbles without first considering how safely you can retrieve your bullets. Are you going to open fire here? In this wide open room? Let's hope you're a crack shot, mate, because if you miss there's no way you're getting that one back for a while. Your bullets aren't resources to be spent; they're precious artefacts to be zealously guarded, and carefully loaned out to only your most trusted confidants. By which I mean, nearby monsters. Sorry, was that a bit too flowery?

A mechanic is just a mechanic, though, so what of the gameplay that houses it? Well, by all the evidence provided, I ought to be all over it: it's unashamedly old-school, brutally unforgiving, twitchier than a Counter-Strike server for amphetamine addicts, and the gracious host to our old friend, roguelike elements. Enemies notice you almost immediately and can close the gap before you've even trained your crosshairs on them, so caution is a virtue, but having borrowed the Doom marine's rocket-powered wheelchair you're no slouch yourself, so the pacing covers a remarkably wide spectrum. At times the game almost feels like a survival horror, combining the extremely limited ammo pool with the tension of carefully checking each corner to make sure nothing is about to snack on your nose, but all it takes is one large room to stretch your legs in and suddenly it's E1M8 all over again. There are even secret doors hidden in the walls that conceal really good equipment, so you can complete that image by going up to every single naff-looking texture and trying to mash your face into it. 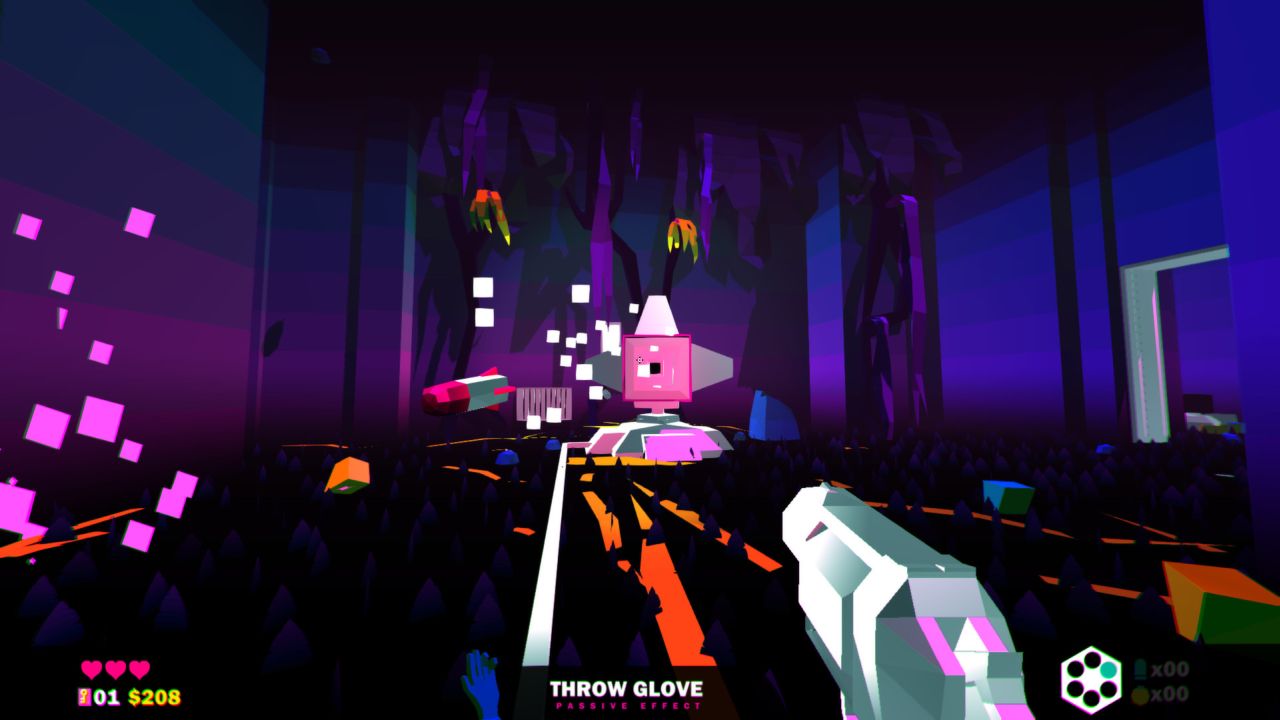 That last point is about the nicest thing I'm prepared to say about the level design, unfortunately. You'd think that the levels would be procedurally-generated, and they most certainly are, but they're so homogeneous and interchangeable throughout that the developers might as well have plonked down a bunch of static mazes and called it a day. The game is supposed to take place in some kind of mainframe building, and while I'm sure this lurid pastel jungle-infested environment is a completely accurate depiction, it doesn't make the endless sequences of corridors and boxy rooms any less uninspired. I'm not asking for Half-Life-tier level design here, but for crying out loud, please have something. There are no staircases, no ramps, no platforms - there's no verticality whatsoever actually, making the 'rocket-powered wheelchair' comparison much more apt than you might've thought - no windows, and no walls at anything less than ninety-degree angles. It's like being trapped in a dreadful Wolfenstein 3D mod that was designed with an etch-a-sketch. There aren't many solid, quantitative measures of level design quality, but there's one that's definitely relevant to us here: for every occurrence of me backtracking completely by accident because absolutely everything looks the same, subtract eleventy billion points. That leaves Heavy Bullets with a score of... actually, I'll get back to you on that one.

This isn't just a gripe about the background scenery either. It might seem somewhat petty of me to complain that Heavy Bullets doesn't have a bottomless well of fresh environments to slacken my foolish jaw at, but hand in hand with repetitive level design comes its execrable business associate, repetitive combat encounters. With so little variation in your surroundings, there are really only two distinct situations in which you fight an enemy: face-to-face in an empty corridor, or face-to-face in a big empty room. Needless to say, in circumstances like this it doesn't take long for the game to start covering old ground. Yes, yes, yes, I mentioned earlier that the pacing can vary wildly, but your relative fragility means that unless you recently volunteered to test crash helmets made from recycled newspapers, you will always be playing cautiously, and the likelihood of breaking things up with a blood-pumping arena fight is - aside from the mid-game boss fight and the occasional unavoidable turret gauntlet - almost nil.

Our Review of Heavy Bullets
66%
Adequate
The Verdict:
"Stellar six-gun subtleties support speedy, samey, sub-standard shooter"
Game Ranking
Heavy Bullets is ranked #1193 out of 1581 total reviewed games. It is ranked #109 out of 152 games reviewed in 2014.
1192. ScreamRide
Xbox One
1193. Heavy Bullets