So Heavy Bullets has something of a problem with tedium - as those of you who can spot a pattern in a wallpaper store might have noticed - which might've struck some as odd considering its affinity for roguelike elements. How much more varied can you get than putting the player's items and upgrades in the hands of fate? To do that, we need to look a bit more closely. You can carry one up to two different items at a time and buy upgrades for various attributes of your character throughout the game: maximum health, reload, coin magnet, bullet magnet and carrying capacity. Here's the thing, though: most of those upgrades are more or less useless. Upgrading your reload statistic lets you load multiple bullets into your revolver at once, but the animation is near-instant already and lets you reload as quickly as you can smash the 'R' button, so all the upgrade really does is marginally reduce your chances of repetitive strain injury. Upgrading your carrying capacity lets you carry multiple items of the same kind in the same slot - usually deployable sub-weapons, like mines and mega-bombs - but the whim of the random-number generator means that actually finding the same item multiple times is far too unlikely to seriously make it worth the money. And what conceivable use could I ever have for an upgraded coin magnet when dropped coins remain on the ground indefinitely? I can just hoover them up at my leisure once every enemy in the immediate vicinity is lying dead in a thousand smoking bits. At least in Tower of Guns it kind of made sense to have such an ability within the confines of the game's 'collect all the orbs before they disappear' mechanic - as achingly stupid as it might have been - but here it really is just a matter of convenience. What's next, an upgrade that makes the ammo indicator more visible? Actually that wouldn't be half-bad; it's really titchy. 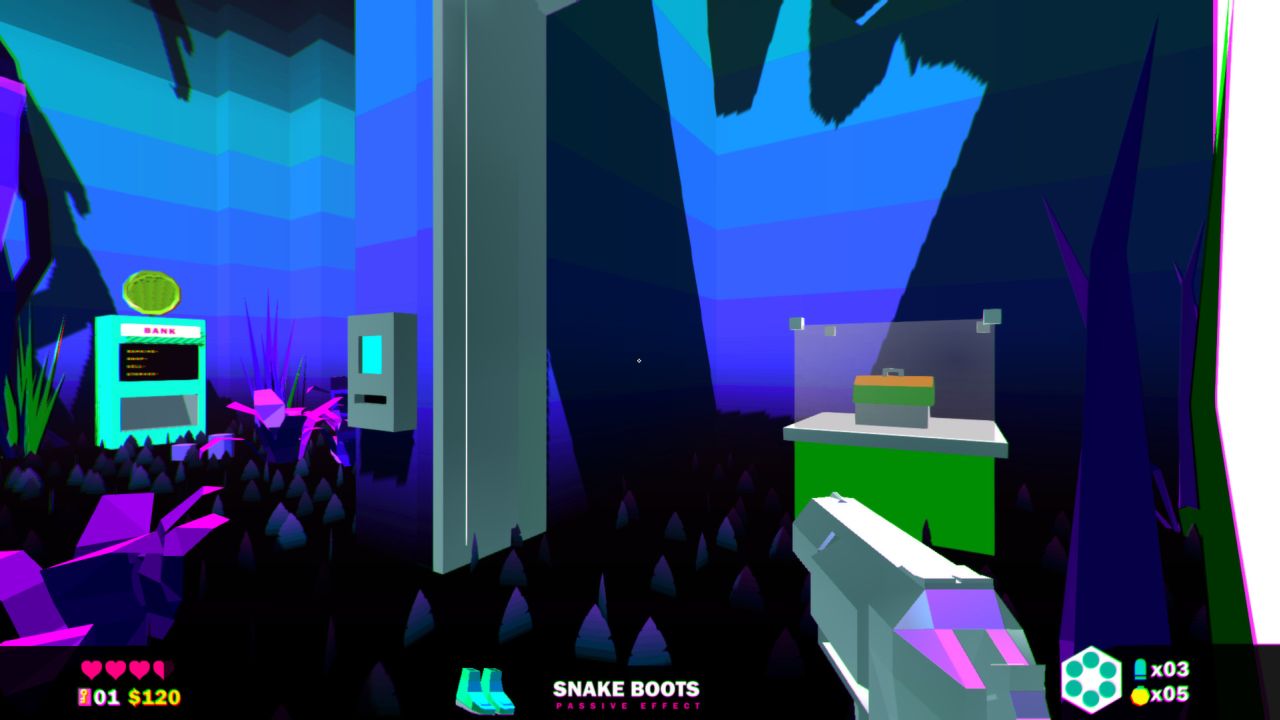 Things fare a little bit better with the items themselves. If you're accustomed to, say, Tower of Guns' sizeable buffet, then the selection here is going to seem about as appealing as a platter of stale dog biscuits, but Heavy Bullets nevertheless does its best to cater a respectable range. Superficially, it seems to pull it off - you can find potions, pills, explosives, various bits of equipment, even gloriously cruel 'trap' items - but it's somewhat unwilling to hold the core gameplay's hand, like a nervous middle-schooler at a dance. Nothing you pick up ever really changes the way you play, or even attempts to toy with the gun mechanics. It doesn't matter if you're carrying a bomb vest or a proximity locator or a slow-motion gem, the gunplay is always exactly the same: shoot, retrieve, reload, repeat. It's as if the game is so insufferably proud of its central mechanic that it won't allow a single other gameplay element to come close, lest it leave its greasy fingerprints all over it. “The core combat is perfect, you hear?” Heavy Bullets screeches hoarsely, loosely clutching a small but expensive glass of shandy in one hand and gesturing aggressively with the other. “You'll use it unaltered for all eight levels and bloody well like it!”

There's a reason why I've coyly skirted around calling Heavy Bullets a roguelike, by the way. Certainly, it has the procedurally-generated levels and randomly-selected items - not very good ones, but hey, I'm done ragging on them - but in the perma-death department it's a bit of a damp squib. No doubt, once you go down you aren't getting back up - something that the gigantic pink “YOU DIED” text seems to take a kind of sick pleasure in informing you - but the game presents a number of ways to ensure your legacy doesn't stop there. You can, if you feel the Grim Reaper breathing down your neck, dump all your gold into your bank account via an ATM, which retains permanence between playthroughs; you can buy life insurance, ensuring a certain percentage of your money is deposited upon your death; or, if you have a spare item slot, you can carry around a last will to pass on everything you currently possess to the next playthrough. It creates this strange brand of continuity where each run is not a standalone experience, but rather a chronological event that leaves a permanent mark on the one steadfast thing in the game's universe: your savings. Some runs giveth, and some taketh away. None of this is a problem in itself - I mean, nobody's forcing Heavy Bullets to be a bona fide roguelike, and it opens up some interesting options when you sense imminent death - but when the game starts balancing itself around the feature things start to get iffy. Health, additional ammo, common items and upgrades are all primarily acquired from vending machines strewn throughout the building, but their prices start off steep and quickly escalate into the realm of complete battiness, to the point where you either go without them or start to dip heavily into your funds. Rather than utilising the banking system as a means of passing on your inheritance, you end up using it to just stockpile massive amounts of money to blow on every promising run you get. Success isn't feasible without repeated highly-profitable failures, and there's something distinctly irritating about that. 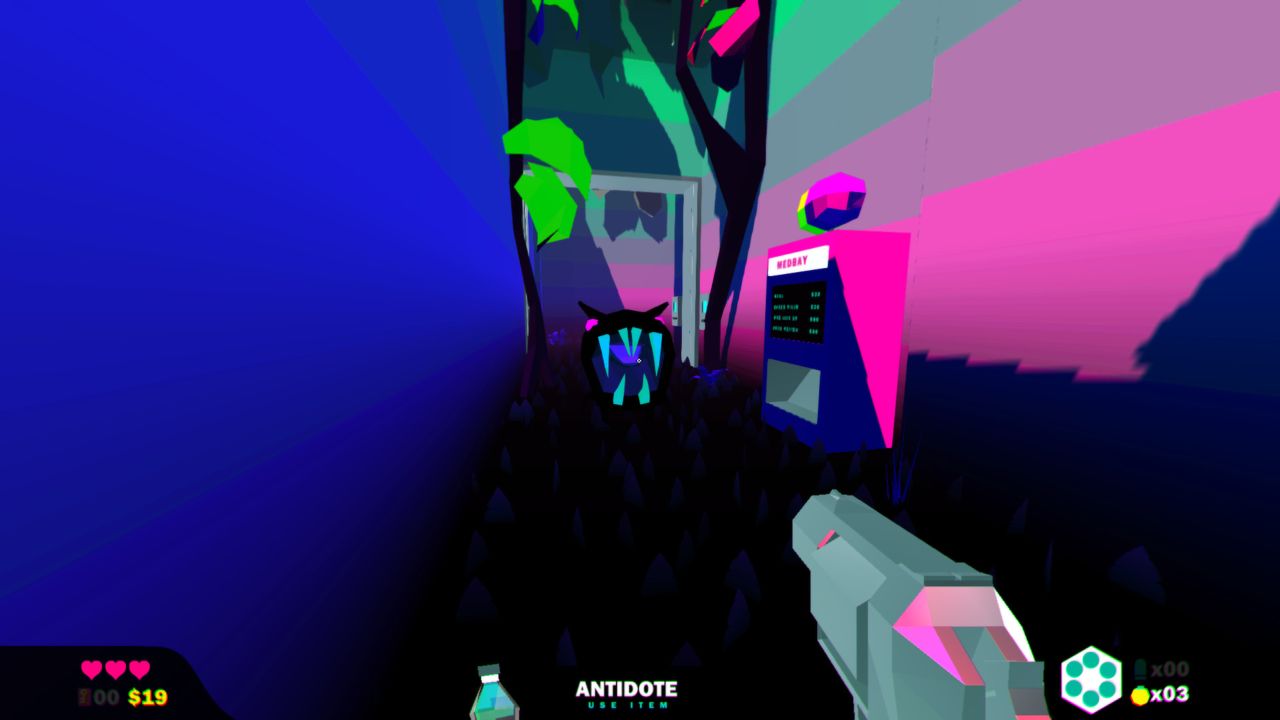 Heavy Bullets is the kind of game that holds up if you don't look too closely at it. That's not to say it isn't polished - it absolutely is, minor stuttering issues aside - but rather, greater expectations expose larger cracks in its slightly ill-fitting armour. If you just want a fresh gameplay mechanic to put enough of a spin on an old-school 'run around a maze and shoot everything' shooter to make it engaging for a few more precious hours, Heavy Bullets will happily provide, loose fittings rattling all the way. If you're expecting something deep or carefully designed, it'll turn up a blank. The level design is about as inspired as the Windows 98 maze screensaver, the roguelike elements are integrated with all the care of a runaway tanker becoming integrated into a pier, and the bank system is about as fulfilling to interact with as it is in real life. Sitting under all that is one good mechanic - one really good mechanic, mind - that never expands beyond the small bubble of comfort where it feels completely under control. If that sounds like something you'd tolerate, then give it a shot. Make sure to pick up your bullet afterwards, though.

Prev12
Our ratings for Heavy Bullets on PC out of 100 (Ratings FAQ)
Presentation
76
A stylish, colourful, polygonal take on a concept that could have only been dreamed up with the aid of strong narcotics. Sound design is pretty good too. Music fits the theme, but seems a little bit tame for the overwhelmingly hostile environments.
Gameplay
66
A high-speed first-person dungeon crawler with a clever central mechanic and a whole load of not-so-clever guff surrounding it.
Single Player
59
Even for a procedurally-generated game, the storytelling is pretty weak. Does it matter? Goodness gracious no, now let's go shoot more monsters from the original Alone in the Dark.
Multiplayer
NR
None
Performance
(Show PC Specs)
CPU: Intel i7-870 @ 2.93 GHz
GPU: Nvidia GeForce GTX 760
RAM: 8GB DDR3
OS: Windows 7 Premium 64-bit

81
Stutters occasionally with unbelievably poor timing. It doesn't sound like much, but a split-second disruption at the wrong time can devastate an entire playthrough. Some minor clipping issues tend to occur around the more elaborate bits of geometry.
Overall
66
A somewhat anaemic dungeon-crawling first-person shooter with intense core combat that never evolves (and little else worth praising).

Our Review of Heavy Bullets
66%
Adequate
The Verdict:
"Stellar six-gun subtleties support speedy, samey, sub-standard shooter"
Game Ranking
Heavy Bullets is ranked #1283 out of 1734 total reviewed games. It is ranked #109 out of 152 games reviewed in 2014.
1282. ScreamRide
Xbox One
1283. Heavy Bullets