On paper, combining a first-person shooter with a bullet hell shooter sounds like a real corker of an idea. After all, games like Serious Sam have showed us the entertainment value in being forced to deal with several hundred assorted threats at once, and when you think about it, it's fairly easy to boil down both genres to the central premise of 'shoot everything that isn't you, then progress'. It seems like a perfect match, but unfortunately there's also a fairly obvious point of contention here: bullets.

My understanding, though I am not an expert, is that bullets are fast. Very fast. By the time you register the presence of one, it has already cut a dainty little hole in your abdomen and embedded itself in a wall several hundred meters behind you. Even in a bullet hell shooter, where it is taken as read that you will need to dodge bullets – a skill normally only available to wire-fu protagonists and Keanu Reeves in a trench-coat – they still move at a fairly sprightly pace, and transforming such a formula into a first-person game would be like forcing the player to dance in the rain without getting wet. Tower of Guns, thankfully, solves the problem neatly by making all its projectiles move as though they've been submerged in gelatine, turning the experience of being shot at from twelve different directions into something more akin to being locked in a room with a bunch of people who occasionally throw water balloons at you. Really, it's more fun than it sounds. 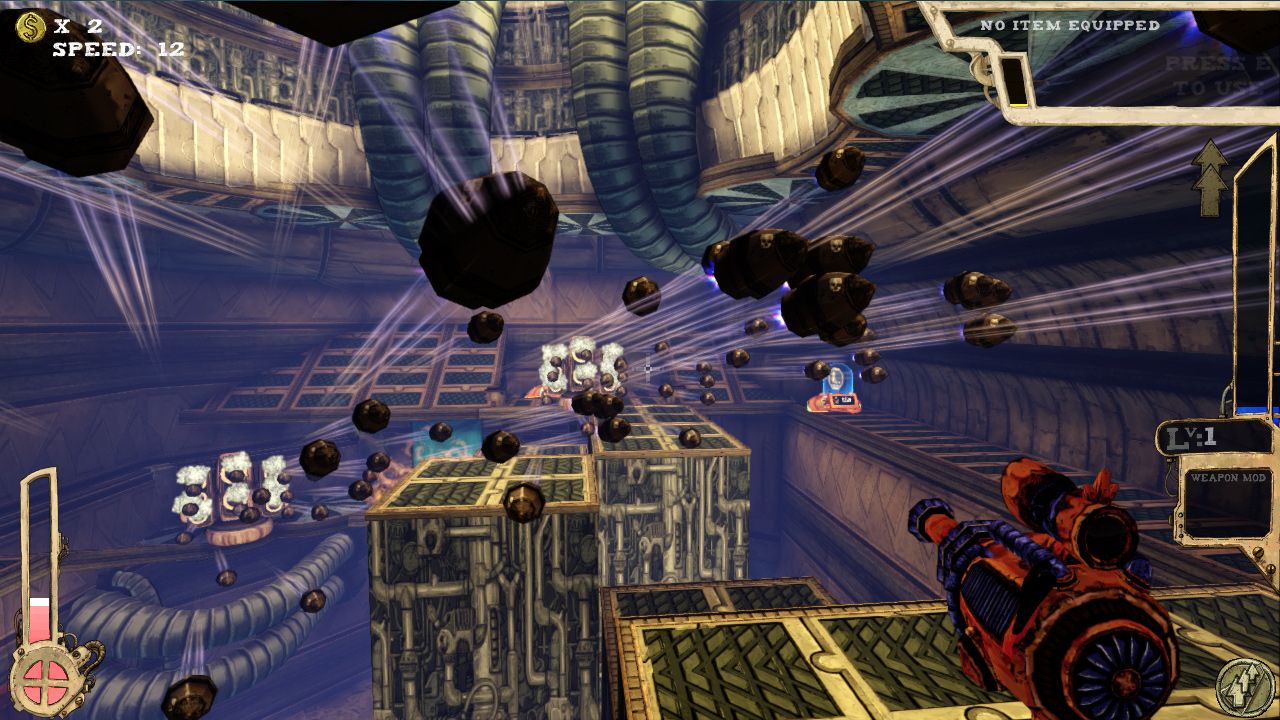 The basic premise is about as simple as it gets without bringing the NES down from the attic: you are at the bottom of a tower, which is – for reasons that are left as an exercise to the reader – full of guns, and you must get to the top by progressing through various themed floors. Upon entering each room, the game slams the door behind you and populates the room with robotic enemies – most of which are turrets – to be dispatched of, fled from or simply ignored. Not exactly The Last Of Us, but the appeal lies in fast-paced old-school FPS gameplay encased in a solid shell of roguelike elements, which are fast becoming somewhat ubiquitous among indie games nowadays. I'll probably start complaining in due time, but for now it still feels like a positive trend.

Surprisingly there is a story – or more correctly, there are stories – to go with this premise, although one wonders why you'd bother trying to contrive such a thing. At the very start of each playthrough the game randomly selects one of several plots, which then proceeds to be told via dialogue boxes at the start and end of every floor. Obviously they don't have particularly sensible material to work with, so the stories have this kind of irritating 'quirky' quality to them which usually entails fabricating some kind of absurd scenario and then drawing attention to it every chance they get. Oh, a mouse queuing up at the world's worst DMV. A boy delivering an old lady's Meals On Wheels to the top of her apartment block? How random. Thankfully it seems that the developer himself is aware of this, so the story is entirely optional, and I mean that in quite the literal sense: there's a button on the starting menu that completely disables it, leaving you to immerse yourself in the pure untainted stream of action without any forced context or interjections whatsoever. I considered it such a brilliant feature that I began to wonder what other games it might be successfully applied to. Painkiller? Just Cause 2? Thief? Okay, maybe that one was a low blow.

There's something of a tendency for games that seek to ape the old style of first-person shooters to fail simply because they are built around a stiff, sluggish movement system – see Bulletstorm, Alien Rage – and Tower of Guns instantly earned my approval, however conditional and easy to lose with the slightest transgression – by proving that it knows how to handle itself. Movement is simple, swift, and delicately balances air control with momentum. Bunnyhopping feels a bit sticky at times, and tends to be a bit impractical in combat, but carries that curiously addictive quality where you'll find yourself absent-mindedly doing it whenever there's a break in the action. Sure, it all sounds inconsequential, but in a game like this where being able to avoid getting knocked out of the sky by a giant spiked cannonball is paramount to your survival, you tend to appreciate the level of control you have. Towards the later stages of the game, once you've acquired enough upgrades to be nigh-unstoppable, it feels most like Unreal Tournament; specifically, one of those heavily modded servers you would always find in the wee hours of the morning where everybody has a quadruple jump, infinite adrenaline and a minigun that shoots Redeemers. I'll get to that in a bit. 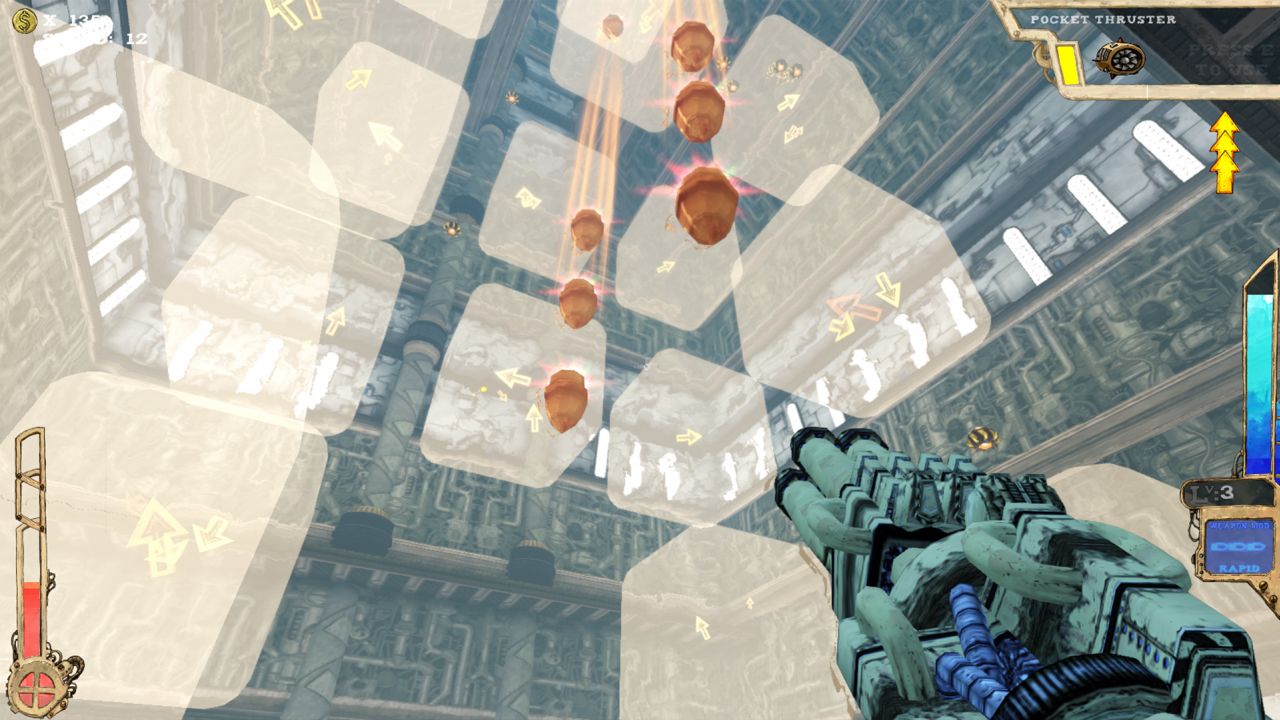 The oft-teased upgrades are the primary part of Tower of Guns' own take on roguelike elements, squirreled away in secret areas, coin-operated dispensers or simply randomly dropped by slain enemies. Badges will upgrade various aspects of your capability – health, armour, speed, jump height, critical chance and so forth – and you're allowed to carry around one item in what is presumably the only pocket on your person, which can be activated to produce some form of short lived effect, like flying for ten seconds, or instantly committing room-wide genocide upon a certain enemy type. So far, so standard. While there is indeed quite an extensive range of items for you to acquire, each with their own unique effect, some of them feel a bit gimmicky (like the pea shooter, which never needs recharging and requires you to constantly hammer the 'use' button like a speed-running woodpecker in order to actually get anything useful out of it) and there's a fairly wide gulf of effectiveness where some are so situational that I ended up never using them; and some are so universally useful that I was closely monitoring their recharge bars like a bored high-school student eyeing the clock on a Friday afternoon. The badges themselves fare slightly better, due to the fact that while they aren't particularly interesting on their own – except the speed and jump upgrades, of course, because wheeeeeeee – they do help contribute to the satisfying feeling of slowly growing your character from a mewling kitten into an unstoppable bullet-spewing monstrosity.

Only with the introduction of the third and rarest upgrade type, known as gun mods, do things start to get genuinely interesting. These do exactly what they say on the tin, drastically modifying the way your weapon behaves, and even if you have the imagination of a discarded chocolate wrapper I'm sure you can see the potential in a feature like this. Picking up a 'spread' mod can turn a rocket launcher into a rocket shotgun, picking up a 'fire mine' mod can turn a minigun into a devastating napalm distributor, picking up a 'TNT' mod can turn a spike-ball launcher into a sure-fire way to accidentally kill yourself, and so on. My only complaint about this feature – apart from how damn difficult it is to get your mitts on one of these mods throughout an average run, seriously – is that it feels like it hasn't managed to fill even a fraction of its real potential. You can only have one gun mod active at once, you see, which really doesn't make the most of the concept. Imagine what could be done with only a single extra gun mod slot. Bouncing mine-laying rockets! Oversized vampiric spike-balls! 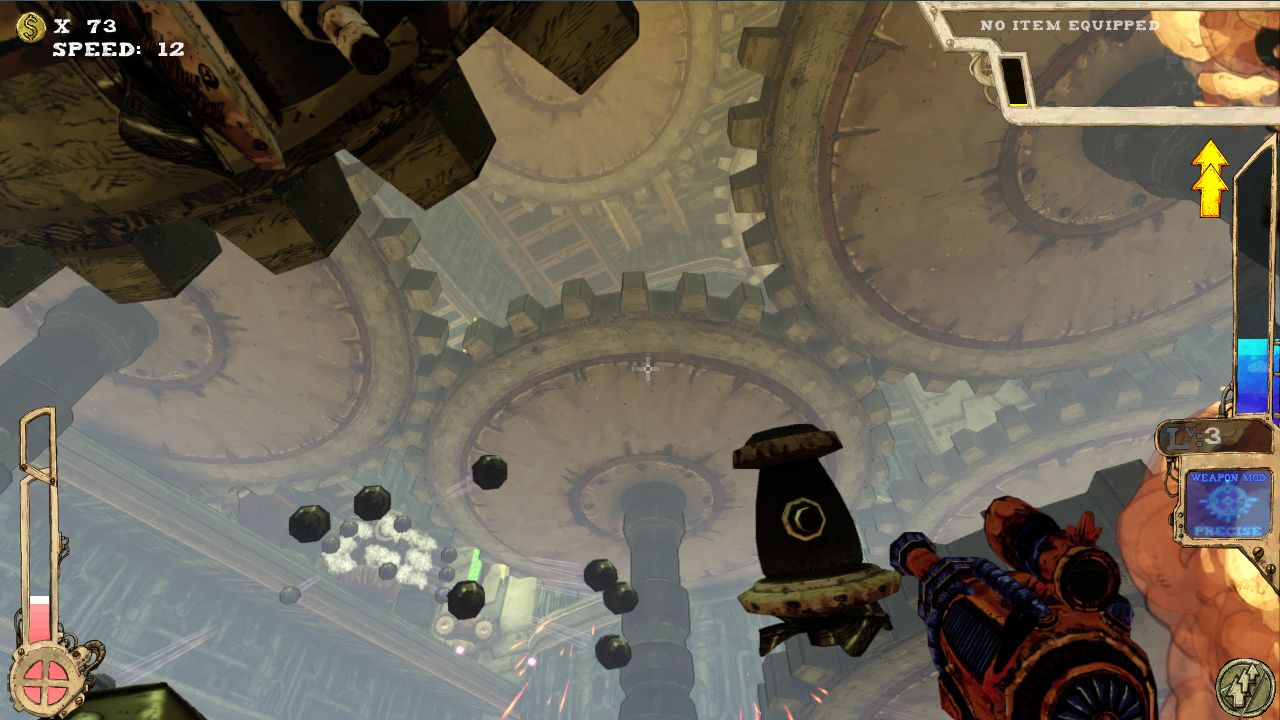 Don't worry. I'm sure the mere prospect of programming such a feature has given the game's developer sufficient nightmare fuel to last him several months.

The more well-versed among you are probably formulating a vision somewhere along the lines of an FPS take on The Binding of Isaac right about now, and while this is indeed an apt comparison – limited gun mods aside – it sort of breaks down when you get to the level design. Each room is a pre-fabricated slice, often of completely irregular shape, into which randomly-selected arrangements of enemies spawn until the game deems that you have suffered enough. While it is a tad disappointing that it the rooms themselves aren't randomly generated, the fact that they aren't allows the level design to properly complement Tower of Guns' playing style, making good use of the jump pads and secret areas to create some properly inventive rooms that switch radically between Quake-esque cramped arenas and Serious Sam-esque wide-open spaces. It's also worth noting that while the rooms themselves usually give the player relative freedom, the progression as a whole is strictly linear – the game essentially just stitches the rooms together, end-to-end – and I'm kind of in two minds about this. On one hand it's a fairly drastic departure from one of the central tenets of roguelike elements – second only to permanent death and having a rubbish story – but on the other hand, this might just be one of the games where it's actually an appropriate modification to the formula. Tower of Guns is a game that thrives in its relentless stream of action, and can't afford to stop for long because there's sod-all else for it to offer. Non-linearity would inevitably mean backtracking, and unlike The Binding Of Isaac, traversing an empty floor in a hurry is not a minor feat. There's platforming to be done, staircases to be climbed, extremely long corridors to be bunnyhopped down. Backtracking has no place in Tower of Guns.