Electronic Arts has announced the record start of FIFA Soccer 13, selling over 4.5 million games across all platforms worldwide in just five days. FIFA 13 was the No. 1 selling game in at least 40 countries around the world.

The launch began September 25, led by more than 1.23 million games sold in the first 48 hours in the United Kingdom. FIFA Soccer 13 is only the second videogame franchise ever to sell more than 1 million units in the UK within just 1 day.

September 30, 2012 was the busiest day for online gaming for a single title in EA history, when 800,000 fans played FIFA Soccer 13 simultaneously. More than 66 million online game sessions have already been played on FIFA Soccer 13, representing 600 million minutes of online play.

“FIFA Soccer 13 is a critical and commercial success unprecedented in sports entertainment,” said Andrew Wilson, Executive Vice President of EA SPORTS. “Every minute of every day millions of fans around the world are experiencing what the critics have already said —FIFA Soccer 13 is the biggest and best sports game we have ever created.” 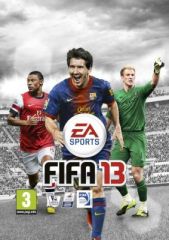