In Total War: WARHAMMER III each choice you make will shape the reality-shattering conflict to come; from the mysterious Lands of the East to the daemon-infested Realms of Chaos. Featuring new races from the World of Warhammer Fantasy Battles, including the video-game debut of Kislev and Cathay alongside the factions of Chaos – Khorne, Nurgle, Slaanesh and Tzeentch - players will wage war with a diverse array of legendary heroes, gargantuan monsters, flying creatures and magical powers. 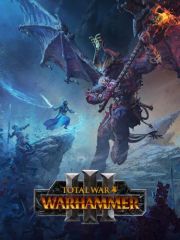