Take your team all the way in Madden NFL 17 and put yourself at the center of your team’s Championship run in Franchise mode, delivering all-new ways to play and more decisions to make. Driven by the most balanced gameplay yet, the deepest commentary in Madden NFL franchise history, along with fun and fresh ways to play modes such as Ultimate Team and Draft Champions, Madden NFL 17 promises to be the most complete experience yet. 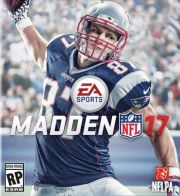