Also known as: Overlord II
Overlord II is a 2009 action-adventure game and sequel to the 2007 video game Overlord, developed by Triumph Studios and published by Codemasters. Continuing the style of the series, the game is set in a fantasy realm where players take the role of the Overlord, a mysterious warrior whose goal is to destroy or conquer the land by commanding hordes of small creatures known as "Minions". 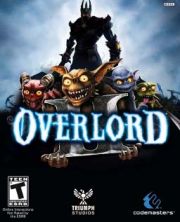