Also known as: Medieval Moves: Deadmund's Quest
Medieval Moves: Deadmund's Quest combines sword fighting, archery and throwing weapons into a progressive action-adventure. The evil Sorcerer Morgrimm has invaded Prince Edmund's Castle and plots to take over the kingdom, raising an army of skeletons from beyond. Now you must fight Morgrimm and his minions to restore order to the kingdom. 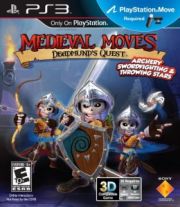 Our Review of Medieval Moves
64%
Adequate
The Verdict:
"Finally a proper adventure game for the PlayStation Move from the fine team behind Sports Champions"
Game Ranking
Medieval Moves is ranked #1303 out of 1646 total reviewed games. It is ranked #100 out of 105 games reviewed in 2011.
1302. Moons of Madness
PC
1303. Medieval Moves