Defy the impossible and dominate the forces of nature. Step up to 8 of the world’s most dangerous sports. Plunge down mountains in your wingsuit, pull off a frontside 360 while kiteboarding along the Gold Coast, or hurtle down 200 foot waterfalls on your kayak as you attempt to burn your name into the history books. Every move you make has the potential to push you closer to becoming an extreme sports legend-or rip you in half. Only by risking everything will you be able to break the will of Mother Nature. 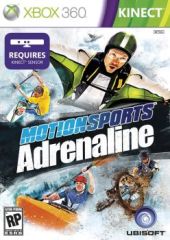