It seems like it wasn’t so long ago that PES 2013 took to the pitch and made slow, careful advancements in both tech and gameplay. It was expected to be the last game on this generation of consoles – but that didn’t happen. Instead, for their own reasons, the development team behind Pro Evolution Soccer has opted to remain on Xbox 360 and PlayStation 3, yet use a whole new FOX engine for this year’s title. What we get is a completely rebuilt and more technically impressive game, but one that clearly shows early development stumbles.

As you should expect, PES 2014 still lacks many of the licensing agreements with clubs and leagues that EA’s FIFA so viciously holds on to. You get a few teams from various top leagues, as well as many players’ likenesses, but otherwise the rosters are madeup of fictional crests, team names, etc. To help with this, the game includes the all-powerful editor that lets users recreate the real thing, and share with others. At least Konami is still holding the rights to UEFA Champions League, a few other regional competitions and - new this year - Asia Champions League. 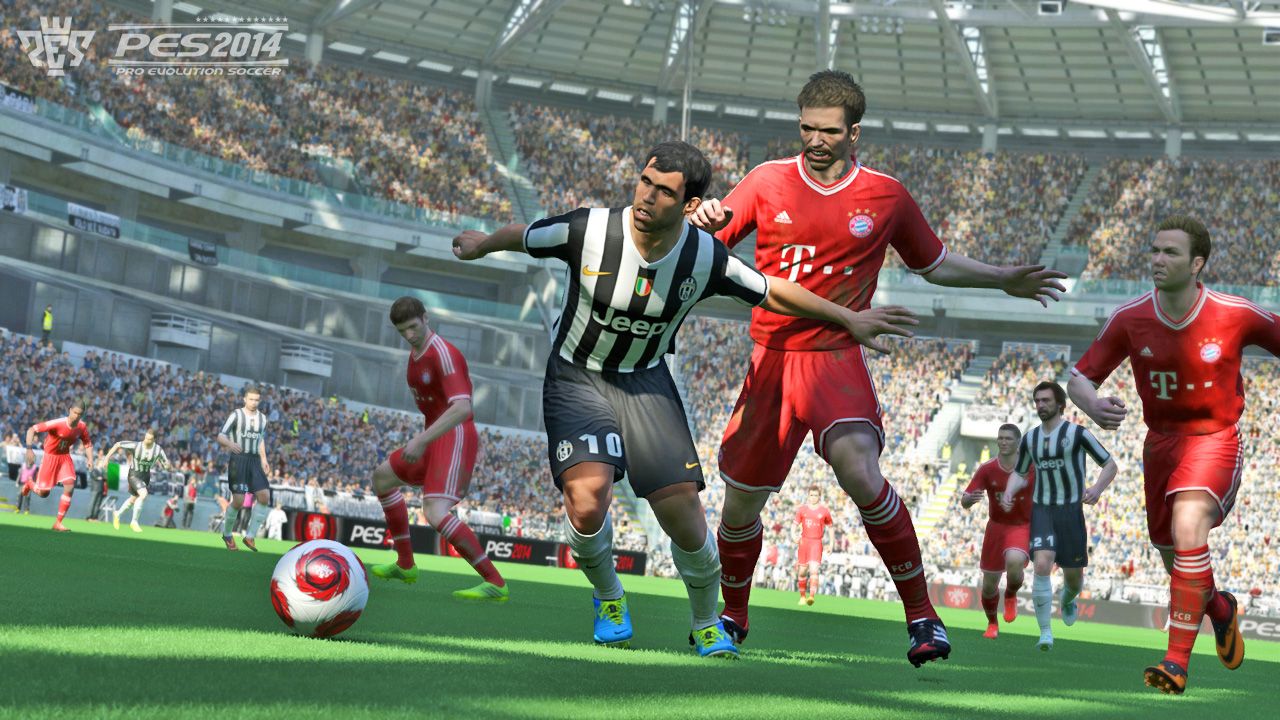 The game is now running on the new FOX Engine from Konami and Kojima Productions. Because of this, the whole experience has been rebuilt. Unfortunately this means the gameplay modes have been streamlined and stripped of features. Stadium Editor has been removed altogether. The Master League career mode, where players can guide their team to glory, now presents itself with a simple menu-based interface that lacks many options from the previous years. Now you’ve got an oversimplified mode of managing a budget, assigning training points, and negotiating transfers – what’s worse, the ability to simulate days or events has been removed. You must sit through an excessive amount of loading screens instead, reading every unimportant message that comes across your desk.Gone are the special presentation visuals that helped you virtualize your life as a manager, as you watched players train, met coaches and players face to face, did media interviews, etc.

It’s all a big step back for a franchise that had these features just last year, and a harsh shot to the heart of diehard fans. The annoyances multiply further in Become a Legend mode, where the game has just as many loading screens and halts simulation progress for calendar events that have zero for you to do as a non-manager. And as the features from the old engine get stripped, existing annoyances seem to carry on – there is still no ability to skip the rest of the match after being substituted, and the given fast forward option is painfully slow. The only new additions are managing an international squad during your career or transferring to another club between seasons. 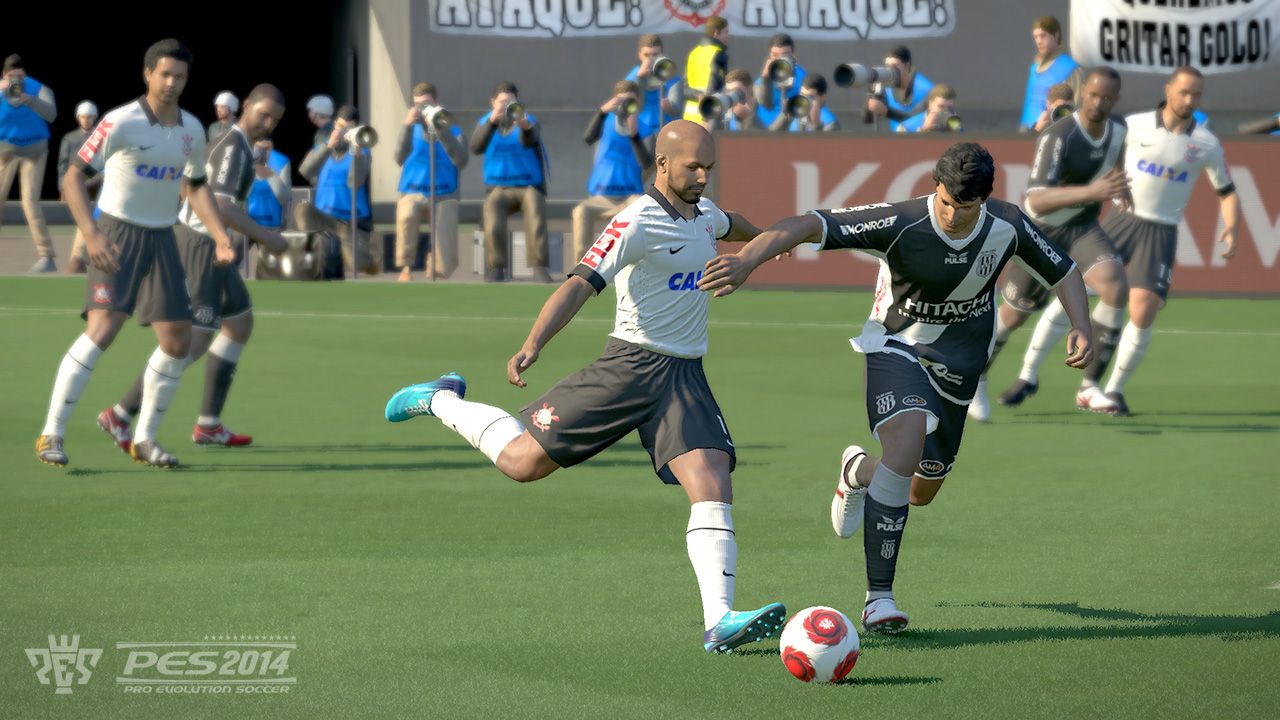 As you’ve read so far, the new engine is more of a hindrance than an improvement, and this trend unfortunately continues onto the field of play. But let’s start with the positives – this is probably the best animated PES game ever. Players move, weave, and dribble with such style, finesse, and accuracy that it’s almost mesmerizing to watch. Great animations, new desperation plays, and precise physicality are all courtesy of returning PlayerID and MASS systems; they give each player on the field a unique feel and, mostly importantly, accurately recreate the behaviours and styles of well-known superstars. Whether it’s Messi’s quick feet or Ronaldo’s somewhat awkward running, you can tell a lot of effort went into making these players behave like the real life counterparts.

Other gameplay mechanics are not as impacting. TrueBall Tech hopes to improve on the first touch abilities of players but the results are difficult to point out; the idea of Heart and taking a mental pressure aspect into the gameplay doesn’t seem to affect the action very much. A new Combination Play system works well, however, as it allows players to create certain scenarios in their game plan strategy. These strategies can then be executed when a player with the ball enters a certain quadrant of the pitch, similarly to what EA’s NHL franchise has been doing for a few years. 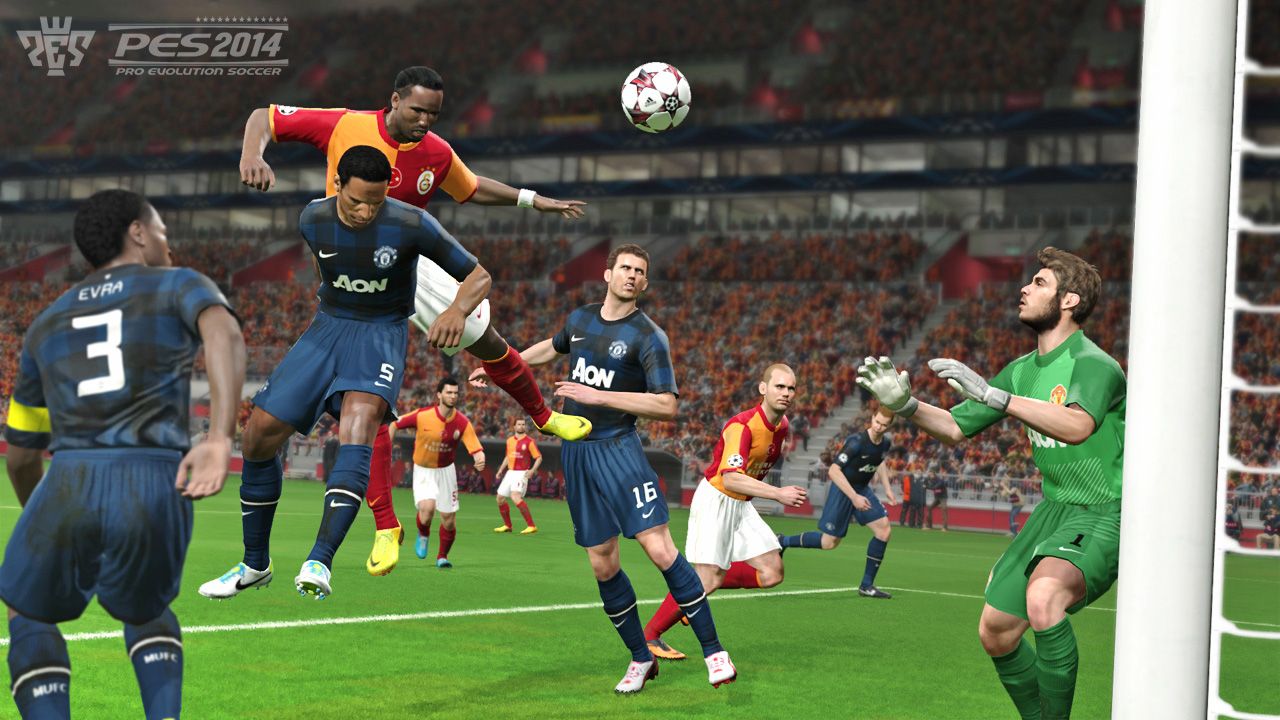 It wouldn’t be a PES game without a thick control manual to read through, and this year is no different. Skilled players and those willing to learn will get the most out of the competitive experience, but if you’re new it’s still possible to get by using the basics. The practice mode has been expanded and helps demonstrate new controls and set pieces – the latter have been revamped a bit with more tactical options. Overall, the gameplay is smooth and highly competitive, though with a few minor annoyances. Players don’t seem to be able to shoot the ball as quickly as they should, the crossbar gets hit far too often, and there are some issues with AI being too quick particularly when catching up.

Those looking to venture out online will first actually have to download the day one update; it unlocks the basic multiplayer functionality, in theory. Sadly the game’s patch has been is more trouble than anticipated, and we only managed to get a few online matches played through various disconnects and stability issues. Bigger modes, such as 11 vs 11 online play, are not even included, and instead promised to arrive for free in a later update. Online functionality in PES 2014 raises red flags regarding the game’s readiness at the time of launch – once again, whether or not that’s due to the new engine is a tough call.

PES 2014 retains the series hallmark presentation when it comes to licensed content, so all cup competitions feature authentic music and visuals. Players look good on the pitch thanks to the realistic visual style, definitely enhanced via the new tech. Crowd chants and general atmosphere of the matches can be quite awe-inspiring. Stadiums and faces of less famous players, however, leave something to be desired. 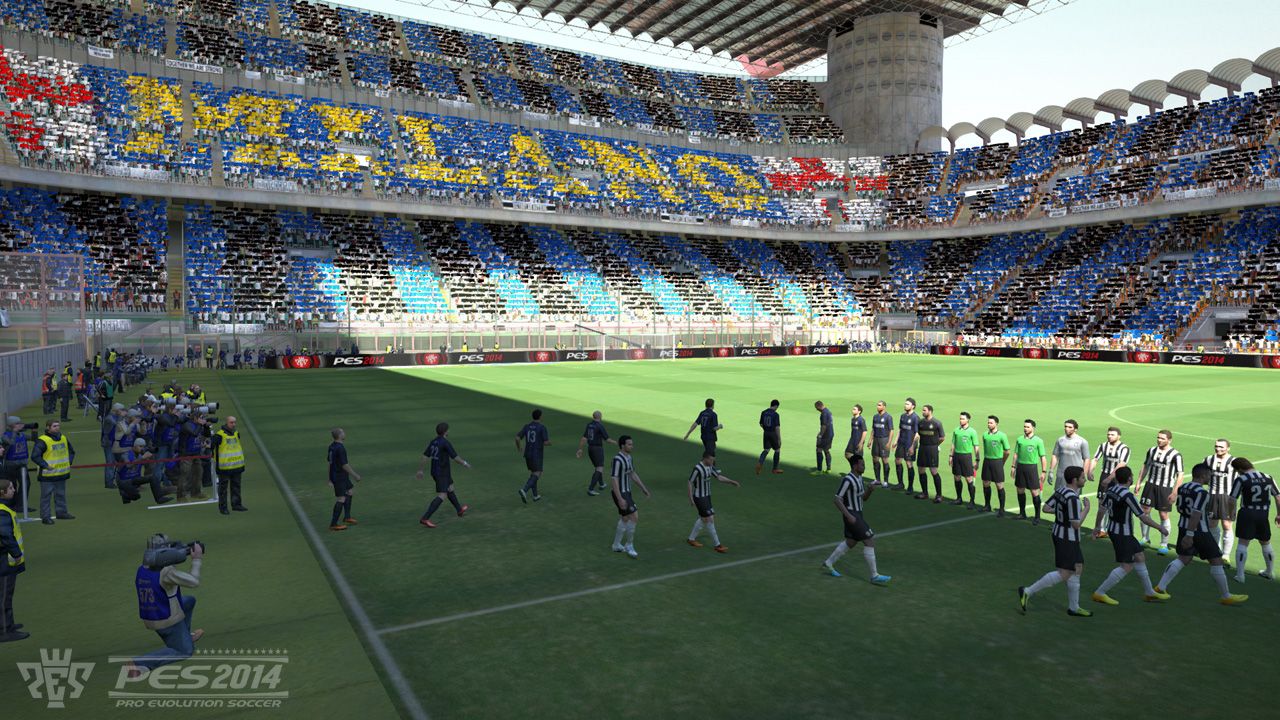 Further, the game struggles with technical issues on the pitch. There are annoying framerate issues during most of the cutscenes and out-of-play camera views during matches. It gets particularly bad during presentations, such as a cup win, as the game struggles and freezes to load the celebrations. What’s worse, there are frequent momentary slowdowns in front of goal – an unacceptable issue that can have an impact on the field of play. All of these problems were encountered during numerous game sessions across two different PS3 systems. Oh, and there are no rain weather conditions. As you might guess, it’s because of the new engine.

The audio design remains basic. Authentic crowd chants are nice, but that’s about it. The commentary remains fairly shallow and outdated, and seems to have a bad problem with repetition this year. The soundtrack is limited and becomes monotonous quickly.

PES 2014 is not a great way to send off a franchise that has been playing catch-up for the past few years. Instead of creating the most feature-packed rendition yet, a risk was taken on a new engine. It will be a few years before anyone will know whether this move will pay off, but PES 2014 ends up being a bit of a lab rat. It may be running on new tech, but so much has been changed and sacrificed in the process, one has to wonder if it’s really worth it. It’s expected that the FOX Engine will serve as foundation for multiple titles on next generation platforms for Konami, but it’s sad to see a current-gen title sacrificed because of it. There’s a solid game of football to be played at this pitch, and maybe in a few years we’ll get back the things we lost, but for now it’s a setback to the franchise.

Our ratings for Pro Evolution Soccer 2014 on PlayStation 3 out of 100 (Ratings FAQ)
Presentation
76
Fluid animations and some well-recreated star players can't hide some sub par textures and unimpressive faces of the rest of the squad. Realistic visual style continues to impress.
Gameplay
80
Still as complex and potentially rewarding as ever. Aside from a few AI quirks, it plays a solid game of football.
Single Player
68
All modes had to be rebuilt, and much was lost in the process. There is less depth, less user options and customization, and it all feels rather barebones.
Multiplayer
63
Only Master League and basic versus play available at launch, with 11v11 coming later. Even so, a problematic multiplayer patch and connectivity issues plague the experience at the moment.
Performance
57
Very poor framerate during most cutscenes, and unacceptable slowdowns in front of goal.
Overall
69
New tech ends up costing this soccer title more than it's worth. The FOX Engine may hold promise for the future, but PES 2014 is a setback for the franchise on current generation platforms.