Deserving of a swift X-communication

Aren't you glad we live in a world where XCOM: Enemy Unknown is treated with the respect it deserves? It just goes to show, really, that a tactical old-timer without a release in over a decade can still step up to the plate, knock all the trendy franchises into a cocked hat and show that there's still space in an industry of me-too action-laced design for a highly-polished cerebral strategy experience. Now 2K and Firaxis Games can sit back, release some DLC and bask in the warm glory of success. Or (edging surreptitiously closer to the actual game at the centre of this review) 2K could turn around, strain out a cover-based shooter and give the impression of a publisher that can't quite cope with the concept of XCOM being critically acclaimed. No, it's okay guys. We really liked Enemy Unknown, look at all the shiny awards it won. You don't have to pander to anybody with a shooter. You don't have to... oh, fine. Give that here, let's see if it's any good. 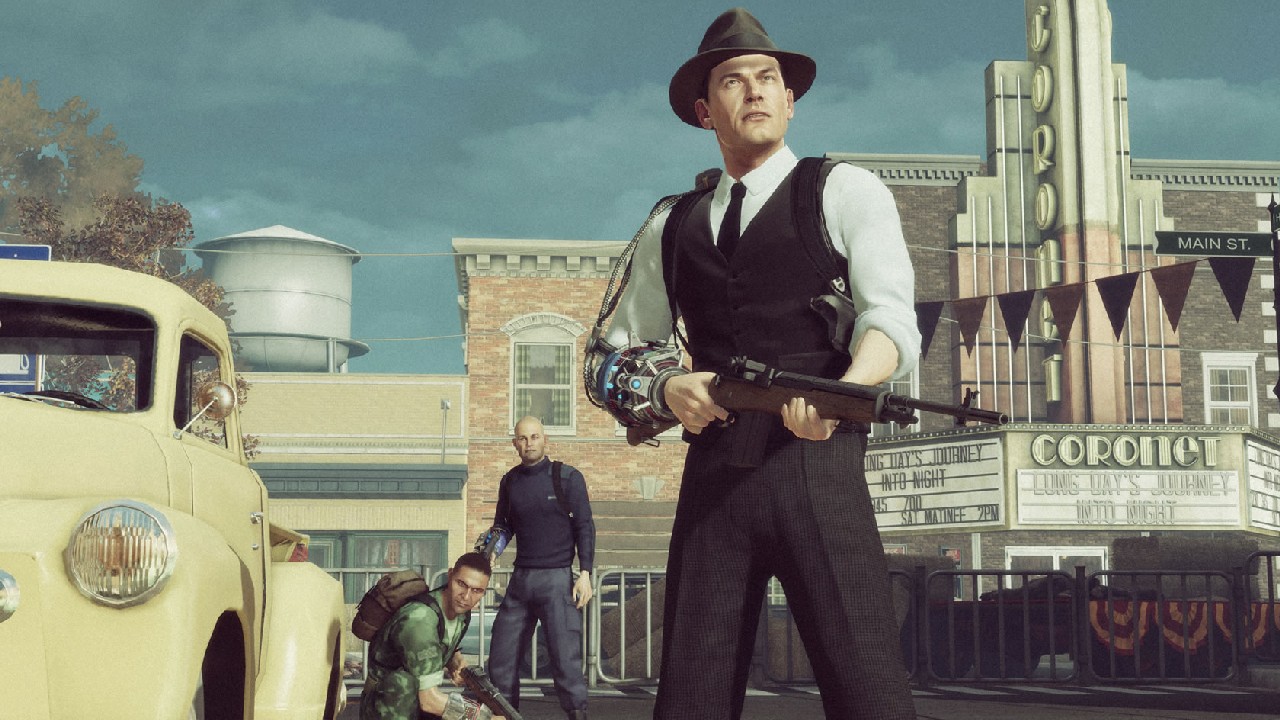 The Bureau opens its curtains on William Carter, a gritty Cold War-era agent with a hairdo full of Brylcreem, a larynx full of macerated paving slabs and a mysterious battered suitcase full of recovered alien technology bound for a meeting with the brassiest of the top brass in a remote military complex. Carter isn't initially entirely aware of the contents of the suitcase, but nevertheless quickly learns the truth when it explodes with enough force to toast an alien spy to a crisp and instantly heal the wounds Carter sustained in a confrontation with the aforementioned spy. Clearly this means that an underpaid drone in an extraterrestrial munitions factory somewhere was reading the wiring diagram upside down, but never mind that. The significance of what was in the suitcase is strangely unimportant to the introductory sequence, which sees Carter fight his way out of the stricken military base as it falls victim to a well-timed alien assault. XCOM is conveniently founded in a matter of hours - getting an impressive amount of hasty explanation dedicated to how that's possible, actually - and it's up to you and your selection of squadmates to save the world as we know it from the extraterrestrial threat - or at least, the world as the people of 1962 knew it.

In truth that little opening paragraph back there was just me ridding myself of a troublesome nodule of cynicism. The Bureau presents itself more fairly as a tactical cover-based shooter of the variety that won't be entirely unfamiliar if you ever played Mass Effect, although if you have a heavy blunt utensil to hand somewhere nearby I suggest you use it to quickly wipe that comparison from your mind before it endears some kind of positive connection. What it means in practice is that the combat is neatly diced into the humdrum shooting gallery routine and the faithfully X-COM-esque squad command feature with the ability to shift between the two granted upon Carter by dint of him being the only person who thought to replace his vocal cords with a hedge trimmer. Cover-based combat is everything you've come to expect from every other wretched game employing cover-based combat - take cover, wait for foes to pop their stupid heads up, shoot, repeat - which is fine as a connecting element, but you need something else for it to actually connect to, which in this case is the aforementioned in-depth squad command. Switching to command mode slows down time to a glacial crawl, bleaches all the colour from the environment and lets you manipulate your two AI squadmates, letting you move them around, give them priority targets and activate their special abilities. If you've been thinking along the same lines as me then you've probably been worried that this dichotomous gameplay is just an attempt to make some form of feeble connection to the X-COM franchise, but fear not: The Bureau's combat really is geared obediently around the tactical interface. Unfortunately, it happens for all the wrong reasons. 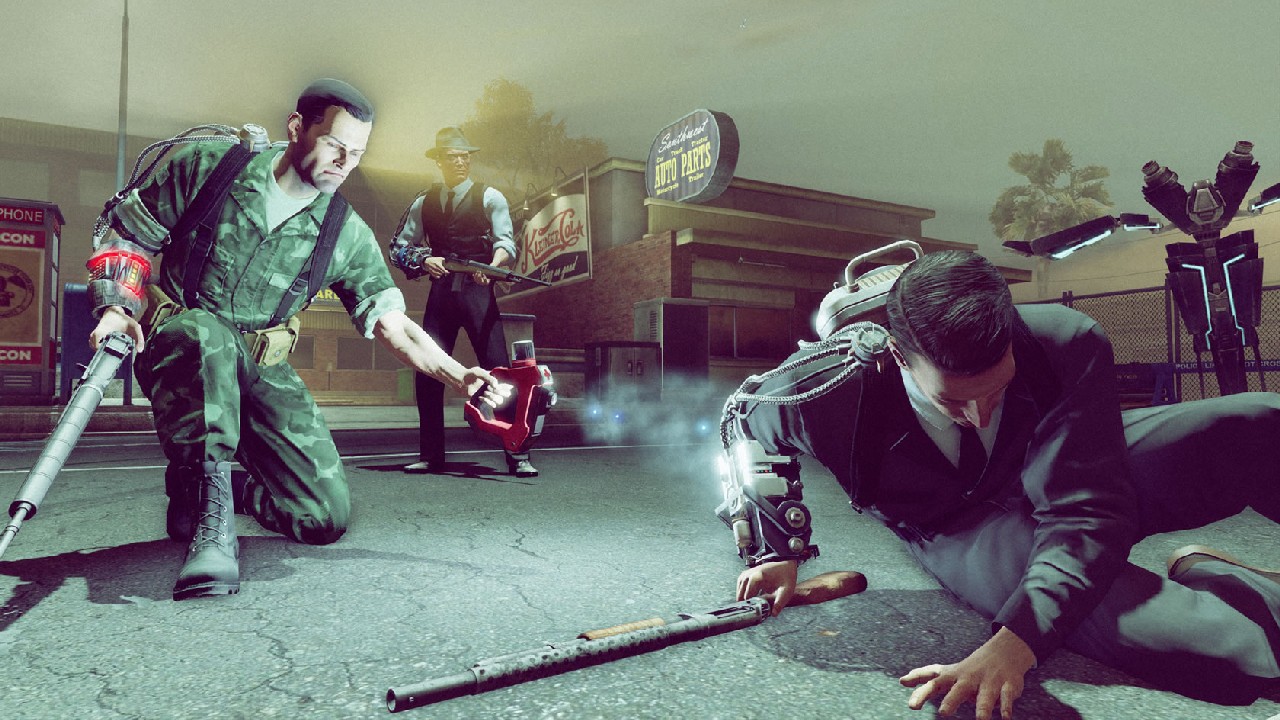 At the core of the issue is the squad AI, which couldn't possibly survive in the real world for more than ten minutes before walking aimlessly onto a six-lane highway and getting reduced to a pile of gibs with a trilby on top. It's almost as if The Bureau was so terrified that the strategy elements would become unnecessary that it rolled back your allies' IQs to the point where they're no longer self-sufficient. As a direct result you end up breaking up the action constantly, either to stop your squad-mates from tweaking the nipples of a twelve-foot-tall armoured alien colossus or to spray them with the game's equivalent of a Revive potion after they've choked on the aforementioned colossus's minigun fire. In another senseless nod to previous X-COM games your squad-mates will permanently die if not properly revived in time, which would have made for some very tense action if it wasn't for the fact that their utter lack of intelligence makes them impossible to care about in any significant capacity beyond that of a cardboard cutout on wheels. You can't even just leave them to die either since you've spent the last few missions levelling them up, and anyway, the alien hordes will quickly turn you to radioactive slag without somebody to draw their fire, so combat is largely just an endless slog of trying to keep your hateful dead-weight allies in line long enough to get to a checkpoint. Imagine trying to escort two unruly toddlers across the full length of the Western Front and you have an approximate analogue for the kind of pace-breaking micromanagement that's being asked of you here.

Nevertheless, it wouldn't be fair to draw attention to unlikeable characters without giving honourable mention to Carter himself, who I theorise is the result of some kind of twisted experiment to create a singularity of generic gritty hero tropes. Oh, he might dress like a dashing gentleman of the sixties but don't be fooled: Beneath that roguish exterior, William Carter is an out-of-place space marine. His emotional range spans all the way from cold frustration to barely-contained rage and his dialogue contains all the warmth and humanity of a Cease and Desist. Efforts are made to explain his character with the usual tragic back-story - wife and kids died in an accident, heavy drinker, gets nightmares - but it predictably falls flat on its face and leaves us with a man who could only be less relatable if he had the face of a zergling. Come to think of that, there's definitely something wrong with Carter's face, although it might just be permanently scrunched up from all the concentrated angst. 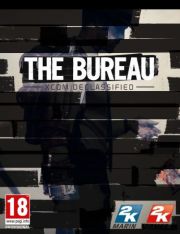 All videos for The Bureau: XCOM Declassified (5)
Advertisement ▼