BioShock lets you do the impossible as you explore a mysterious underwater city. When your plane crashes, you discover Rapture - an underwater Utopia torn apart by civil war. Caught between powerful forces and hunted down by genetically modified "splicers" and deadly security systems, you have to come to grips with a deadly, mysterious world filled with powerful technology and fascinating characters. As little girls loot the dead, and biologically mutated citizens ambush you at every turn. Now you're trapped, caught in the middle of a genetic war that will challenge both your capacity to survive and your moral allegiance to your own humanity. Make meaningful and mature decisions that culminate in the grand question - do you exploit the innocent survivors of Rapture to save yourself - or risk all to become their savior? 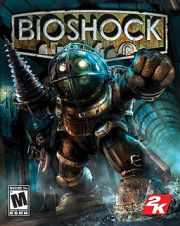