Injustice: Gods Among Us Review

Street fighter IV has held all the glory this generation thanks to a lack of creativity in the fighting genre. Developers NetherRealm hadn’t really managed to reignite brawler fans’ enthusiasm for the Mortal Kombat series either. So, upon learning they were working on a fighting game with the DC character roster it perhaps wasn’t unfair to assume something of a DC cosplay version of Mortal Kombat.

Except this isn’t a reskinned Mortal Kombat. This is a great game. While some of the control inputs bear a strong resemblance to Mortal Kombat, this feels much more responsive and fluid when layering combos and juggling opponents. These may sound like basic things to get right in a fighting game, but they form an essential foundation and grab your attention early on.

Special moves only require the simplest of d-pad inputs. Backwards, forwards, punch. Away, towards, kick. Down, towards, punch and so on. In-depth combos allow you to use a few of these together, maybe with an extra punch or kick somewhere in the middle, but the majority of special moves are accessible to even the most meat-handed of players, which is great for newbies. Compared to Street Fighter and its quarter-circle-centric controls, Injustice is much more approachable, with anyone able to pull off killer moves early on. Combos require swift button-inputs, rather than pacing them until each animation finishes. All the moves are readily available in the pause menu and seriously dedicated fighter fans can see all the geeky timing and animation frame information that means nothing to most of us, but is the sort of thing tournament fighters will love. Injustice wants to be taken seriously. 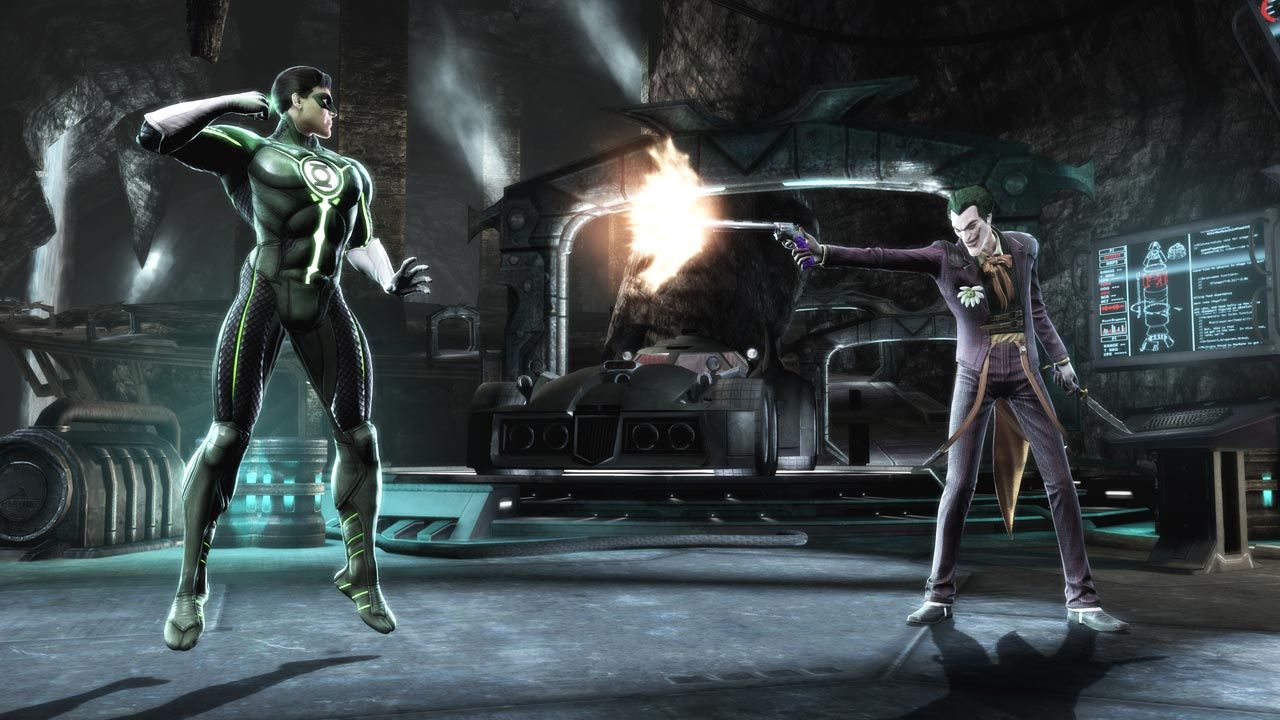 Each character’s skills and personality are faithfully represented by the special moves. Batman uses grappling guns and batarangs to pull-in and annoy opponents before unleashing some crunching melee moves, including an awesome defensive parry that ends in an ankle snap. On the other end of the scale, Superman has heat vision, wind breath (probably not the official name there) and floats above the ground constantly because he’s better than everyone else. Apparently.

Super moves are available when the metre is filled during the fight by kicking ass or having your own ass handed to you. Hold down L2 and R2 to unleash it, usually when you’re close to your opponent. There’s no Mortal Kombat-style secret to seeing these ace moves. They’re not finishers, but will generally take 30-40% of an opponent’s health. Wonder Woman ties an opponent with her lasso while her Amazonian allies smash them up, Batman has the Batmobile run them over, Flash will run around the globe to build up momentum for a bitch-slap while Superman smashes you into orbit only to meet you up there and hammer you back down to earth.

In the build-up to the game’s release, the environments were hyped by NetherRealm as being fully interactive and it’s fantastic to be able to say they’ve delivered on that promise. The R1 button is your friend for these moves and it’ll flash up in the corner when you’re near something interactive. Many background objects can be picked up and flung at your opponent. Statues, cars, boulders, monitors and so on. Overhead pipes can be broken to send a gust of nitrogen into surprised faces. In the bat cave you can punch a button and have the Batmobile fire rockets, there’s just so much to discover in every stage. 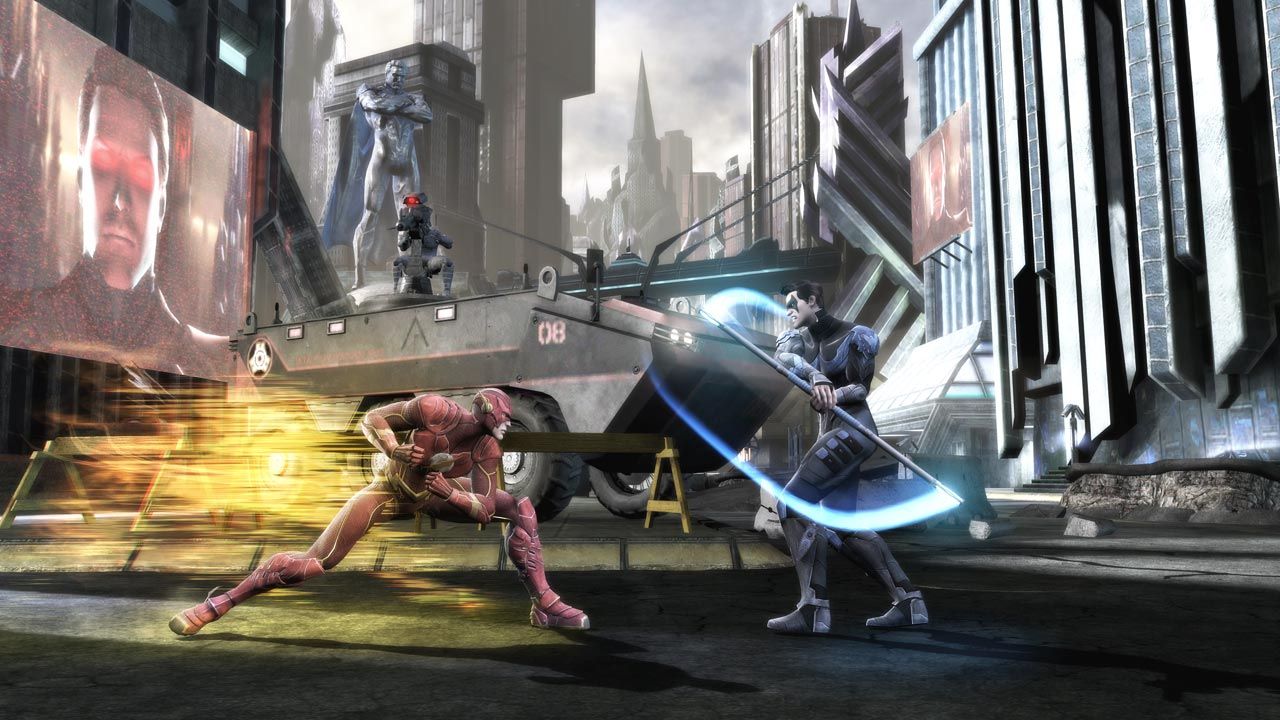 Each stage features a transition too. Usually activated by pressing away and X to perform a powerful knockback and send the DC legends smashing through walls, buildings, solid ground, anything, taking the battle to new environments. It was always fun knocking people through walls or up/down a level in Dead or Alive or Mortal Kombat, but this has taken it to a whole new level. And you’re going to love it.

Some fighters feel noticeably weaker than others, although I only really started to notice this when playing online. Batman is a lot of fun, but putting him up against projectile-heavy fighters like Superman or Deathstroke can be irritating, as it can be tough to get near them. So far, online players seem much keener to use the super-power enabled characters rather than the likes of Batman or Joker.

Balancing aside, the only other issue I had with the combat is the wager system where in the middle of a fight the action halts and you bet an amount of your Super metre with the winner getting a health boost and the looser getting nothing. The highest bidder supposedly wins, but I found the house to be cheating on this little gambit 95% of the time.

While traditionally the weakest element of a beat ‘em up game, Injustice’s story mode is rather excellent. It enables you to try out most of the characters on the roster, with them getting about four fights each. This helps to avoid settling on a favourite early on and never changing, AKA Ken syndrome in Street Fighter. On a technical note: there’s not a single loading screen between fights and cutscenes in the story unless you need a rematch. Impressive. 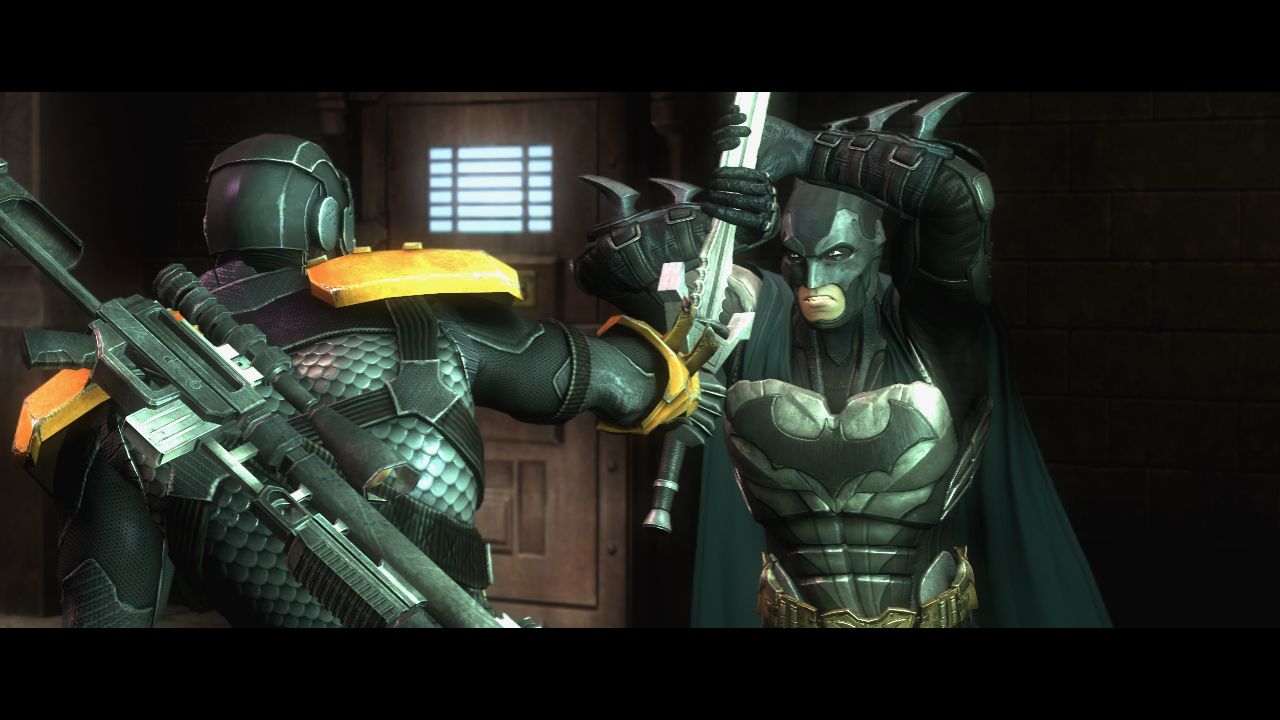 The story involves our DC heroes travelling to an alternate dimension where Superman has gone off the deep end. The Joker tricked him into killing Lois and wiping out half of Metropolis, so he’s gone power crazy with a zero tolerance to crime, freedom and insubordination. Anyone that crosses him is killed including his allies. If this were an episode of Smallville, you’d think he had a fist-sized rock of red Kryptonite up his butt, but it turns out he’s just a paranoid, moody sulk-pants in this universe. That’s where the likes of Batman, Wonder Woman, Flash, Green Arrow and company come in as they try to bring down the most powerful superhero of them all.

You can expect to fight the other dimension’s heroes and villains in equal measure. When facing off against your interdimensional-twin some of the costumes are way too similar, making fights very difficult to follow. Batman’s and Superman’s have slightly differently toned colours for example. Others have more obvious differences, Harley Quinn has different coloured hair, Green Lantern B is yellow not green and Wonder Woman has an outfit apparently designed to try and get Superman’s attention by putting her boobs in his face as much as possible.

Voice-over work is of an excellent quality throughout, although some of the lines will make you cringe, as they probably should. Kevin Conroy reprises his role as Batman pleasing fans of the animated series and the Arkham games. No Mark Hamill (Joker), but his replacement is close enough. The actor from the Arrow TV show and various regulars from DC cartoons are present too. Troy Baker (Bioshock Infinite, The Last of Us) continues to appear in another of this year’s big games too. Don’t worry Nolan ‘Uncharted’ North fans, he’s in too.

After the reasonably lengthy story, you’ll want to check out the option-packed Battles mode. The Classic option resembles a traditional arcade mode, with a brief cutscene at the end for each character. Other modes task you with beating all the villains or heroes. Health drain, survival and and many more can be unlocked as you progress. S.T.A.R.S. mode is a selection of challenges. Each stage has multiple goals with a star awarded for each with the aim for purists being to three-star each stage. These tasks involve using certain moves or more annoying tests like not being hit by Batman’s batarangs. Overall, there’s plenty to do in single-player for a change in a beat ‘em up. I’ve not seen this many options outside of the older Soul Calibur games to be honest. 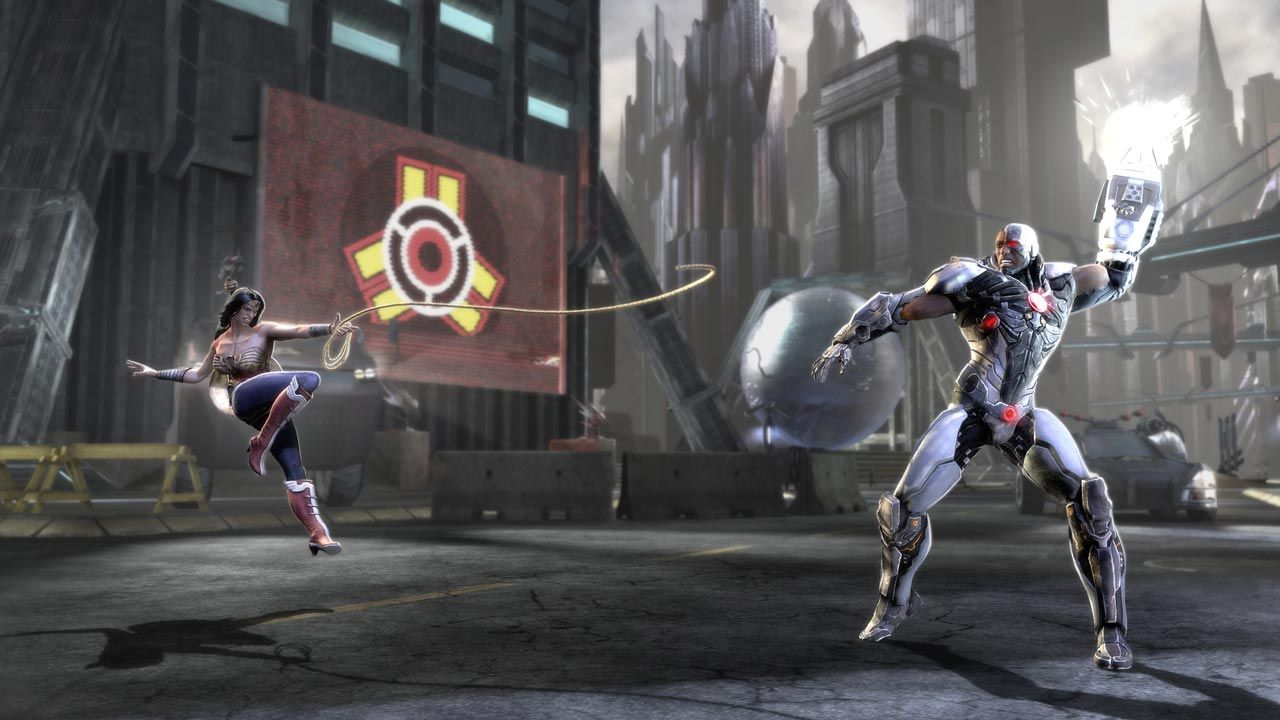 By the time your left thumb starts peeling, you know you’ve put in enough hours to have a crack at the online multiplayer. There aren’t many modes on offer (surprise, it’s a fighting game), but they do the job. Aside from standard duals, there’s a survival and King of the Hill mode. KOTH is essentially a small lobby of players playing winner stays on, old-school arcade-style. While waiting, you get to watch the current match live, which is great for spotting other players’ tactics, admiring skills and generally crapping yourself for when it’s your turn. Survival is similar, but with the winner facing the next opponent with only some health restored.

I played at different times of day and never experienced any lag or latency to disrupt the fights, and at such an early stage of the game’s release, that’s a notable achievement. There seem to be plenty of players online and the room system allows them to pick fights with a long list of challengers, keeping the action flowing nicely.

Injustice: Gods Among Us impresses through and through. The story mode is involving and gives the player the opportunity to try characters they may not have bothered with before. There are plenty of other offline modes to enjoy too. Taking the game online provides a smooth fighting experience with an already thriving community of fighters keen to pit DC’s finest against each other.

Our ratings for Injustice: Gods Among Us on PlayStation 3 out of 100 (Ratings FAQ)
Presentation
82
Character models and fan-pleasing backgrounds are finely detailed and the voice-over work uses a good range of recognizable talent.
Gameplay
87
Special moves are easy to learn and while chaining them takes a bit more practice, it feels exceptionally rewarding when you learn to savage an opponent during a juggle.
Single Player
85
A genre-leading effort at a story, supported by a wealth of challenges and modes to test your steel before taking on the masses online.
Multiplayer
82
Excellent fun online/offline with most of the characters balanced enough to avoid outright domination. Watching in Spectator mode while waiting your turn in KOTH/Survivor matches is never dull either.
Performance
95
No loading screens in the story mode. Smooth and vitally responsive input controls. Lag-free online combat. What more could a fighting fan ask for?
Overall
86
The best brawler on this generation of consoles since Street Fighter IV. Combat is much more responsive than previous efforts from NetherRealm and the use of interactive environments smashes the competition into orbit. Injustice: Gods Among Us is worth any fighting game fan's attention, even if they owe their allegiance to Marvel.

All videos for Injustice: Gods Among Us (3)
Advertisement ▼