Asura is an angry guy. Anyone who’s seen the box art or heard the title can tell you that. Being so angry, the story becomes less and less about Asura as a character and rather a study on the difference between righteous anger and bloodlust. As a character meant to flesh out and carry an entire game, Asura eventually becomes little more than a proxy for the concept of idealized wrath and determination, proving repeatedly to be a demigod that simply will not stay down. Due to a well rounded balancing act of pure anger and good intention, Asura eventually becomes a sympathetic character due to the fact that the game will often heap very real, very heavy consequences on a man with a million enemies and allow the audience to watch him struggle and squirm as he paints a perfect picture of a bloodied corpse on its feet. Bruised, beaten, and breaking under his own weight, but still standing.
What makes the story most interesting, however, is everything that seems to be going on around Asura. Revolving around themes of sacrifice, brutality and righteousness, there seems to be real weight behind the decisions made by the numerous antagonists. They’re brutal, selfish and mean-spirited, but at the same time arguably in the right and highly justified in their actions. With morally ambiguous villains and heroes, the game will legitimately keep you guessing who may be right or wrong and these white knuckle moments persist right up until the final boss. 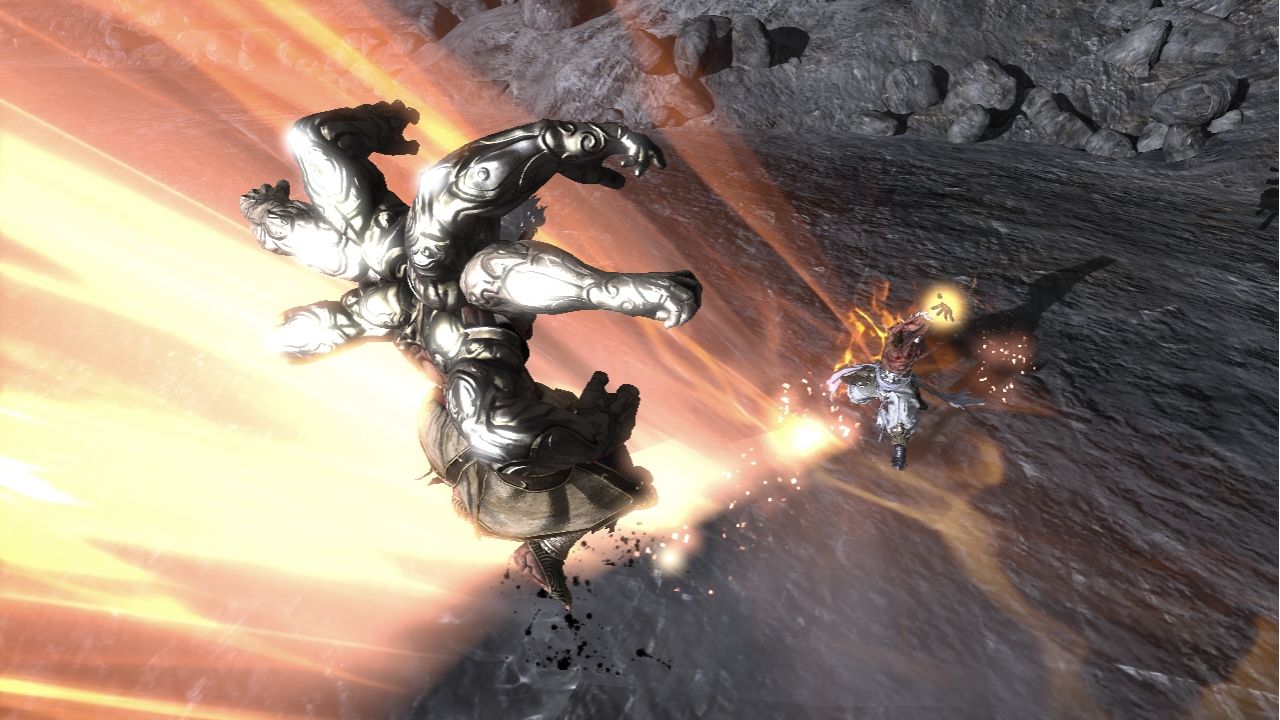 It should be stated, however, that after a satisfying end fight and an ending moment that passes fairly well as a conclusion, Asura’s Wrath drops the ball pretty hard, introducing a “True Ending” feature, which basically means playing the highly taxing end sequence over again just in time to see an unsatisfying cliffhanger. This sort of thing could be tolerated in a video game with less emphasis on story or a game not trying to carry any sort of emotional weight, but as it stands, the true ending is a black mark on the experience as a whole and will leave more invested players yearning for some true closure. Asura is a likable enough character, but an ending that informs us that Asura has no reason to stop being angry isn’t a tasty morsel of what’s yet to come. It’s a slap in the face to anyone invested in Asura as a character.
Asura’s Wrath is neither the lowest-common denominator explosion-fest made to play on mankind’s most relateable emotions for a quick cash grab, nor is it an astounding piece of art slated to set the medium of video game storytelling ablaze. It is, rather, a combination of two of gaming’s most relevant conventions with a tight and linear framework. It uses Heavy Rain’s plot-first sensibilities to emotionally invest the players in the already blood-pumping adrenaline rush of Devil May Cry’s extreme, controller gripping madness. What’s left is a game carried by presentation and well-told, pulpy fantasy adventure. For your money, you won’t be picking up a well-balanced, competition worthy fighting system or a massive 50+ hour epic, but rather a compelling and unique sci-fi thrill ride with enough twists and turns to make it well worth the money.
Prev123
Our ratings for Asura's Wrath on Xbox 360 out of 100 (Ratings FAQ)
Presentation
90
This is a game that prides itself on its presentation as a selling point and succeeds with flying colors. Most every boss fight and epic moment could have counted for a final boss fight in any other video game, and with a colorful, astounding presentation with perfect pace behind the steady progression of events, every single scene is a sight to behold. The presentation is impeccable.
Gameplay
75
Were it not for the nigh-perfect difficulty curve and finely tuned implementation of its many quicktime events, the gameplay could have suffered a lot worse. Early gameplay moments can be lackluster, but are, in the grand scheme of the game, entirely forgivable when juxtaposed against the game’s tighter focused moments.
Single Player
85
Clocking in on the short side, Asura’s Wrath has some slower, less exquisitely paced moments, but is fast-paced and well-rounded the other 90% of the time. My advice to enjoying the game, however, is to take each episode as a short little burst of Asura’s Wrath’s insane multi-hour epic, and you’ll be given an experience that will absolutely stick with you. Just avoid the game’s egregious cliffhanger ending.
Multiplayer
NR
Performance
50
The game tends to lag and become choppy at intense moments. If the review, promotional material, gameplay videos, music, box art or title hasn’t already made it abundantly clear, about 99% of this game is extremely intense. That said, while often frequent, the gameplay lag is never severe or annoying. Don’t expect it to hamper your fun. It may drag on your immersion somewhat.
Overall
84
Asura’s Wrath is not nearly as experimental as its premise would have you believe. However, in the process of taking everything that makes a game and story good, the end result is well handled. Its missteps in unchallenging gameplay and clumsily worked-in story segments mar the experience, but you may just come out of this one with a new lease on the medium as a whole or, if nothing else, a little stress relief.

Our Review of Asura's Wrath
84%
Great
The Verdict:
"A decidedly different foray into action game conventions with a pretension to cinematic gameplay and an extremely inventive style"
Game Ranking
Asura's Wrath is ranked #199 out of 1622 total reviewed games. It is ranked #23 out of 145 games reviewed in 2012.
198. Dance Central 3
Xbox 360
199. Asura's Wrath