A standard playthrough of the co-op campaign will last 4-6 hours, meaning that your overall time spent with the game will be around 10-15 hours. Given that there is almost no replay value, this means that you aren’t getting much bang for your buck. While what content there is in Portal 2 is of extremely high quality, you will be wanting more when you finish, yet there is no more. This is the Portal 2’s biggest problem: there isn’t enough of it. I can’t help but feel that a few challenge maps with leader boards would have helped to negate this issue, but as it stands Portal 2 is still a very good buy if you are a fan of the original. 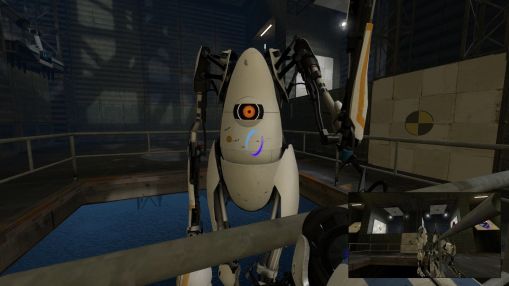 There are times in co-op when suicide is the only option
Visually, the game looks quite good considering the age of the Source engine. A few blurry textures are made up for by fantastic animations and good lighting effects. As with all source engine games Portal 2 is very well optimized and doesn’t require top of the line hardware to run well on the highest settings. The only thing that lowered frame rates for me was the liquid-physics found in the puzzles involving gels. The audio in Portal 2 is really where the games presentation shines however. The music, which is mostly fast and electronic, works stupendously with the game, and comes in at just the right times. There are different cues for different music; for instance when you are bouncing on repulsion gel certain music will play, whereas when you are flying through the air from a spring board another motif will cycle. This gives puzzle solving a fun and fresh feeling as you whiz through the air while appropriate music plays.
The voice acting and writing in Portal 2 warrant special attention; the quality of these is easily on par with the highest quality Disney Pixar animated films. The voice work is really great and the three characters whom you hear from the most often will continue to spout such pure comedy gold that you would be wise to sit still and listen while they cycle through their repertoire. This is probably among the best voice acting and writing ever seen in video games. 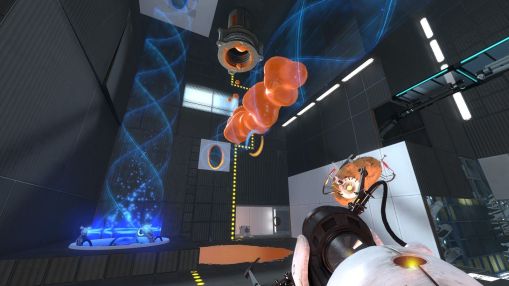 Later levels often include a multitude of variables
In the end, if you enjoyed Portal 1, you will almost certainly love the sequel, and shelling out the full 50 dollars for the game will seem highly worthwhile. If you aren’t as wildly enthusiastic about the series, or puzzle games in general, you might find the amount of content to be a bit light considering the price tag. Regardless, what is here is of the highest quality, and the 10-15 hours you will likely spend with the game will provide no shortage of fantastic and memorable moments. Portal 2 is bigger, better and more varied that its predecessor, and is overall an extraordinary sequel and a brilliant and creative puzzle game.
Prev123
Our ratings for Portal 2 on PC out of 100 (Ratings FAQ)
Presentation
86
Somewhat dated visuals are made up for by top notch production values with some of the best and funniest voice acting and writing in video game history
Gameplay
95
Fun, creative and endlessly engaging, Portal 2 throws in some great curveballs that require you to use the portals in really creative and interesting ways.
Single Player
88
The Singleplayer campaign has a great story, and is so varied and fun that its short length and lack of replay value can be mostly forgiven .
Multiplayer
86
The co-op campaign is a mind-bending blast, containing the most challenging levels in the game. It too is fairly brief at around 5 hours and lacks replay value.
Performance
(Show PC Specs)
CPU: Intel Core 2 Duo e7200 @ 3.1ghz
GPU: Powercolor Radeon HD 5850 PCS+
RAM: 4GB DDR2
OS: Windows 7 Ultimate 64 bit

85
As with all source engine games Portal 2 runs great, even on older or weaker hardware. Frequent loading screens and stuttering caused by liquid physics are the only issues here.
Overall
89
A worthy sequel to one of the most unique games of the last ten years, Portal 2 offers a hilarious and mind-bending, albeit all too brief, romp through the world of Aperture Science.

Our Review of Portal 2
89%
Great
The Verdict:
"Marred only by its brevity, Portal 2 is an exemplary puzzle game that will have you chuckling and banging your head against the wall all at the same time"
Game Ranking
Portal 2 is ranked #35 out of 1668 total reviewed games. It is ranked #4 out of 105 games reviewed in 2011.
34. Flower
PlayStation 3
35. Portal 2