Great story and characters are unmatched by the tedious gameplay

Sierra Madre was lost in the Mojave wasteland when the bombs went off. It vanished before it had the chance to fully open. The Casino and surrounding Villa were lost in time and the treasures remain for those brave enough to explore. With the Dead Money DLC you’ll pick up a radio signal from the Casino promising a new beginning. Things are never that simple. On arrival to the bunker you are knocked out. You awake to find an explosive collar strapped around your neck. You and several others will attempt to gain access to the riches of the Sierra Madre. 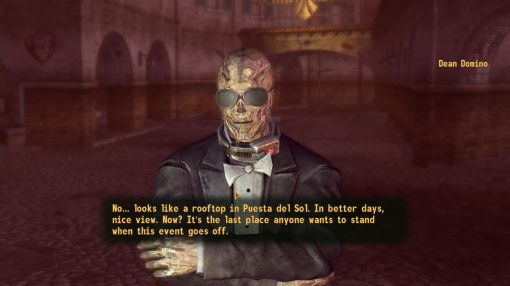 You’ll meet and interact with three interesting characters now prisoners in Sierra Madre. Dog is a Super-mutant with split personality, and handy in a fight. Dean Domino, a performer at the Sierra Madre, is a Ghoul with an affinity for traps. Christine is found barely alive, without a voice, trapped in a medical facility. Each of the characters has the same collar you are wearing. If one of you dies, you all die. It’s in your best interests to keep these individuals alive. First priority is to find some equipment as you start with next to nothing.
Sierra Madre promises a new beginning and that’s exactly what you get. All your weapons and armor are removed after being knocked out. Only your level and skills remain intact, Dead Money is not for the faint hearted. It requests level 20+ players but I recommend level 25 or more. I managed to push my way through with a level 21 character but set the difficulty on very easy due to lack of health and ammo. Exploration of Sierra Madre is not as satisfying as the Mojave wasteland.
There are two main environments in Sierra Madre, the Villa and the Casino itself. The Villa is a maze like area where every corner and building looks the same. These monotonous streets go on for several hours. You deal with many of the same type of “Ghost” enemy which further increases repetition. Instead of the exploration you find in the wasteland you’ll be navigating in claustrophobic areas looking for small items. Once you enter the Casino things take a turn for the better.
The difference between the Casino interior and the Villa is like night and day. It is refreshing to get to the Casino after hours on the gloomy streets. Inside the Casino you deal with invincible patrolling holograms and more Ghost people. You’ll need to sneak around the holograms to find your friends. The Casino is also where the story elements come to a head. You can help or hurt the characters once you get through the dangers. 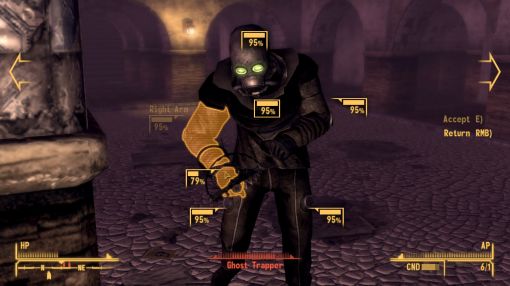 The Ghost enemies you face in both locations are relatively hard to kill. They are high health but focus on melee attacks. Their corpses do not leave ammo or weapons. If you have very few points in melee then you are already at a disadvantage. These ghost enemies must be dismembered if you want them to stay dead. To conserve ammo early I just used a spear to bash off their heads. This spear was otherwise useless to me. Instead of merchants you’ll need to restock at vending machines.
Sierra Madre Chips are scattered around the streets and used on the Vending machines. These machines craft recipes you find and take the chips from you. Unfortunately I never found any useful recipes until many hours into the game. I was always running low on ammo and health during the repetitive streets which made this section even more unpleasant. Compounding this was three more annoyances linked with the pacing.
Three more dangers appear in Sierra Madre - radios, traps and gas clouds. The poisonous gas clouds are most prevalent in the streets. They regularly block the most direct route and force you the long way around. Dean Domino has a perk that helps reduce its initial health reducing effects. It is still very deadly and incredibly annoying to be moving through a maze and having alleys blocked off by these red clouds. Traps will slow your progress via the alternate routes.
The use of traps in Dead Money borders on the absurd. In some segments you literally go a few steps before you come across another trap. Disarming bear trap after bear trap just to progress through a few rooms is terrible design. The damage from some of explosive traps is incredibly high too. More than a few times I lost sufficient health to prompt a quick load. At least you are given plenty of warning when radios are about to set your collar off.
Radios in close proximity will cause your collar to start beeping. The beeping gets faster the longer you are in range. You can probably guess what happens next. Some of the radios can be destroyed before you lose your head. Others are indestructible or just really hard to locate. Dead Money tries to create a survival horror experience by deliberately slowing the game down. The good news is the story picks up where the gameplay falls down.
The greatest aspect of Dead Money is the story Obsidian have presented. They have crafted an interesting little world deep in the wasteland. Each character has lots of well written dialogue to delve into. An impressive final movie completes the story package and leaves you thinking about the events longer that most games. Good voice production and clever dialogue will keep you going forward despite the consistent gameplay issues. 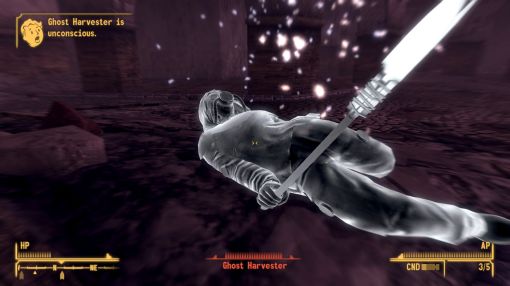 It’s a shame the general experience of Dead Money doesn’t quite match New Vegas or its own story. It would have been vastly improved by culling two hours from the maze like Villa. At seven hours the length is already satisfactory for a $10 DLC. Dead Money is unquestionably better than the first DLC for Fallout 3, Operation Anchorage, but still has areas that need improving.