The start of Fallout: New Vegas brings you back from the dead with the simple task of finding your killer and the reason for your demise. As a courier of the wasteland you have been carefully exterminated by a man in a chequered suit because of what you were carrying. A strange robot rescues you and an aging doctor in a small town brings you back to full health. This is where your story begins in a new wasteland set around the bright lights of the New Vegas Strip. 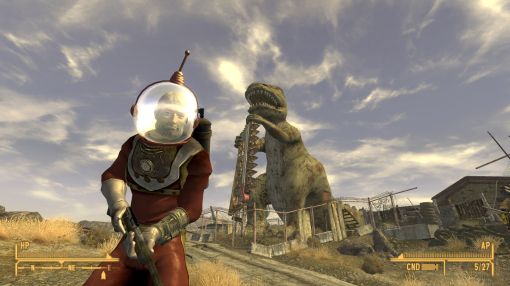 This picture is missing a lot of context

A new wasteland brings forth a whole range of interesting locations to discover and crazy people to meet. Quests are just as enjoyable as the exploration with a myriad of ways to solve them by creating friends, foes or a whole lot of bottle caps. It doesn’t matter if you enjoy solving disputes through violence, negotiation, deception or stealth there is usually a way for you to do each. Finding the start of each quest is even more open with a brand new landscape populated with challenging creatures and locations waiting to be found.

New Vegas is still very much about exploration with over a hundred locations to be found in the wasteland. Stumbling onto a small abandoned house in the middle of nowhere only to realize that it is rigged with a whole range of vicious traps to keep fools like you out is just one example of what you’ll encounter. You’ll want to investigate caves, vaults, cattle ranches, rocket test sites, gas stations, hidden bunkers, ranger outposts and casinos many with a chain of quests that link them all together. There are a great number of one room shacks but there are also a few larger locations with multi-levelled buildings and a fair share of NPCs to interact with or eliminate. As you venture further out into the wasteland you can come across some rather difficult enemies including Deathclaws, radioactive Ghouls, scorpions, giant ants and rogue security bots.
The huge open landscape is populated with points of interest that can be spotted from a distance or you can just head in a direction and hope to come across some place filled with some interesting tasks. There aren’t any brutishly long subway tunnels or maze like indoor areas consisting of levels within levels this time. Most of the locations are smaller in size and this seems to help the game flow better rather than being stuck four levels underground trying to remember the way out. There are still a few vaults to explore which hold a familiar design but two of the vaults I visited were changed in ways that made them more interesting to explore. Lots of the areas you discover lead onto a series of quests ranging from standard courier missions to trickier hostage negotiations. 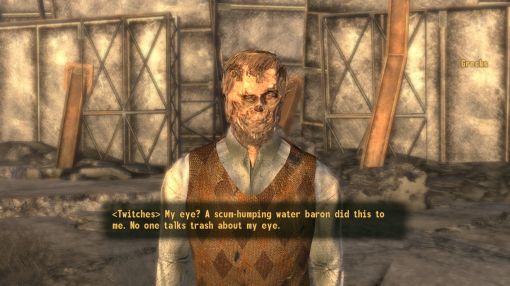 Your eye? No it looks fine, for a hideous Ghoul

Quests in New Vegas are as good if not better than its predecessor if only because they seem to offer more options. The quests seem a little more mature adding an extra level of detail or another clause that makes your decisions less straightforward. After 20 hours I had more than a dozen quests underway at the one time allowing me to choose what to do next and how. You’ll be told that certain parts of your quest are optional and these secondary objectives may make your main task easier or completely change its outcome. In more than one situation I was trusted to deliver goods or items that I could have simply disappeared with giving myself a handy bottle cap bonus.
123Next