Yearly Call of Duty releases have become the norm and you might be hesitant to pick up another release thinking it is just going to be more of the same. Rest assured Black Ops doesn’t disappoint as the well known frenzied campaign and silky smooth multiplayer are as satisfying as ever. The campaign starts off with the Alex Mason, the main character, under torture and interrogation slowly reliving previous missions and their consequences. The story is well presented with a great selection of heart pumping music and copious amounts of explosive action. The pacing can be a little extreme at times and some of the missions aren’t completely up to the high standard it sets for itself. 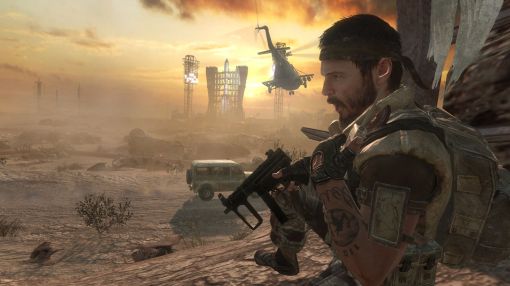 Can we abort the mission and just watch the launch instead?

Mission quality is unfortunately rather inconsistent and if anything it starts rather badly with some cheap looking action along the streets of Cuba. Just as the story unfolds before you the missions get better, including an awesome rooftop sequence in Hong Kong and a heavy fire fight around a launching rocket. Unfortunately there is also the drudgery of bunkers with the North Vietnamese Army rushing toward you like the Bonzai charges we saw in World at War. Around this time you also get a taste of infinite spawns which will simply not stop unless you perform a specific action that is not even made clear to you. The opening few missions are actually rather disappointing but thankfully the game picks up.
The story centres on Alex Mason but you also play a few other characters mostly from the late 60s including a CIA agent and a Russian soldier. Each explores different aspects of the same story arc involving a highly dangerous bio weapon originating from the Nazis in World War 2. There seems to be a more logical connection between the different characters you play and toward the end things come together naturally just as a critical piece of the story is revealed. The story itself is worth mentioning if not for the intrigue then at least for the good presentation in exposing the twist. It’s the pacing of the action that can become a little overbearing not the twisting story.
The pacing of Black Ops is frenetic almost throughout the entire campaign as you move from one battle to the next via several viewpoints. Consequently there are a few incredibly refreshing stealth sections but they also barely give you much time to breathe before you are at full speed again. One of the better stealth mission is located around small shacks along a river in Vietnam after you helicopter is shot down. Creeping your way through the huts in the rain and swimming underwater was a superbly crafted sequence but there was never enough of it. A few minutes later you are engaged in a full on open war with countless soldiers surrounding you. 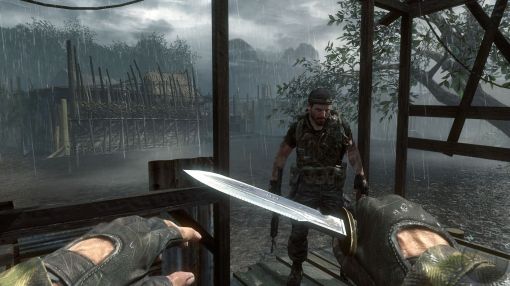 I'm not going out there, it's raining and I can't swim

Even the interrogations performed between missions can make it feel like you are being constantly bombarded with information, be it action or just a sensory overload. One of the very first missions tasks you with killing Castro and it possesses an excessive number of explosions created just outside the building you are in making it hard to even aim. Although the game is designed to be heavy on the action it does somewhat take a toll and more variation in pacing would have helped highlight the even better action sections. The good news is that some levels can be fairly open allowing you more than a few ways to get to your next objective marked on your HUD.
1234Next

All videos for Call of Duty: Black Ops (8)
Advertisement ▼