E3 2010: We get to see the latest effort by Treyarch in the Call of Duty series

Call of Duty: Black Ops is an upcoming FPS developed by Treyarch. The game is the seventh installment of the Call of Duty series and the fourth game in the series to be developed by Treyarch after Call of Duty 2: Big Red One, Call of Duty 3, and Call of Duty: World at War. Taking turns with releasing Call of Duty titles with Infinity Ward, Treyarch has yet to capture the magic of the Modern Warfare sub-series, but their chances look very good with Black Ops. The game is set during the Cold War, as players take on the role of black ops operators involved in missions behind enemy lines, taking place in various locations. We had a chance to sneak backstage at E3 and check out a live gameplay demo.
The level chosen for the live demo was a mission from the campaign, where the player is tasked to infiltrate an electrical substation on the way to a weapon munitions factory. Things kicked off in a cool way, with the player taking on the role of a pilot from a very high flying stealth aircraft. Using infrared cameras, the player gave orders to a small team on the ground in order to quietly let them slip into the enemy’s perimeter. Once the team was in, the player view switched to the soldier on the ground, lying in deep snow and waiting for patrols to pass. This part of the mission was based on stealth – with some squadmates, we quickly eliminated a single patrol using silenced pistols and crossbow. After making it to the edge of a cliff above the substation, we rappelled down onto the building. 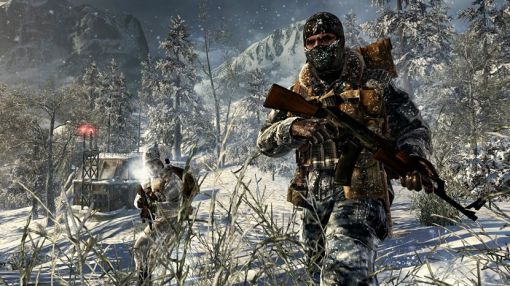 After taking out the guards on the roof, action got heated up as enemies became aware of the situation. Without delay, the ropes were attached to the roof and the player, with his partner, jumped down and into the windows below. Much like in the trailer for the game, employing stylized slow motion while breaking through the glass, we took shots at surprised foes. The substation was at full alarm now, so we switched our crossbow to use explosive tips and started clearing the building room by room. After the ammo ran out, we picked up a shotgun and a rifle and began some old fashioned shooting.
Working through multiple levels of the station, we employed various weapons, grenades, and melee combat as enemies poured in from all directions. Once we made it back outside, an enemy decided to fire a rocket – he missed, but the explosion triggered an avalanche, so there was no choice but to jump. As we base jumped from the edge and began our freefall down, this was one of the most exciting moments of any Call of Duty yet. The player remained in control while in freefall, avoiding various debris as it crashed around us. 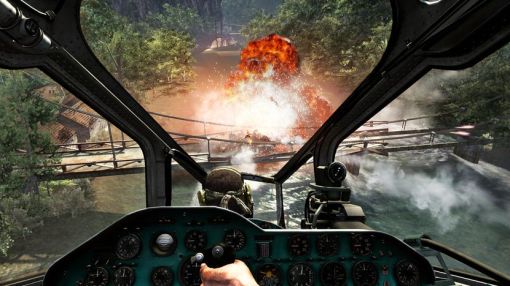 At this point, the second part of the demo began, featuring the often-shown jungle mission. As we ambushed the enemy camp and hijacked the helicopter, it was confirmed that the player is free to pilot the heli, as it is not an on-rails mission, contrary to popular belief. No further proof was needed as the live demo looked vastly different from previous gameplay footage. We dodged and rolled the helicopter around the valleys, avoiding enemy fire and blowing bridges. The enemy on the ground was relatively harmless, and could only scatter and run in panic as we lit up targets across the coast of the river. After a few encounters with the enemy helicopters, which we shot down, our own machine began to smoke and struggle. As we crash landed, the demo was unfortunately over.
The premise of Call of Duty leaving the classic World War theater has long been proven to be a success with Modern Warfare, however this is Treyarch’s first attempt to leave the classical setting. Rather than attempting to chip away at MW’s popularity, the developer has picked their own interesting and intriguing setup for the game, and from what we’ve seen at E3, things are looking good. The developers refused to talk about multiplayer during the presentation, but there’s no doubt that it is an important part of the development, given the series’ popularity in that area. Call of Duty: Black Ops is set to ship November 9th 2010 on PC, Xbox 360 and PS3.

All videos for Call of Duty: Black Ops (8)
Advertisement ▼