A bug-filled adventure (and we're not talking about scatterbugs)

As we reach the end of the year, it's safe to say it has been a pretty solid year for Pokémon. Pokémon GO continues to be a mobile juggernaut, Ash Ketchum finally won the big one and, most importantly to me, Pokémon Legends: Arceus offered up a fresh direction for the series. That release reinvigorated my interest in the franchise, and still stands tall amongst the other strong Switch releases for the year. There's no rest for the weary, though, as the next major entry in the series has arrived with Pokémon Scarlet and Violet. 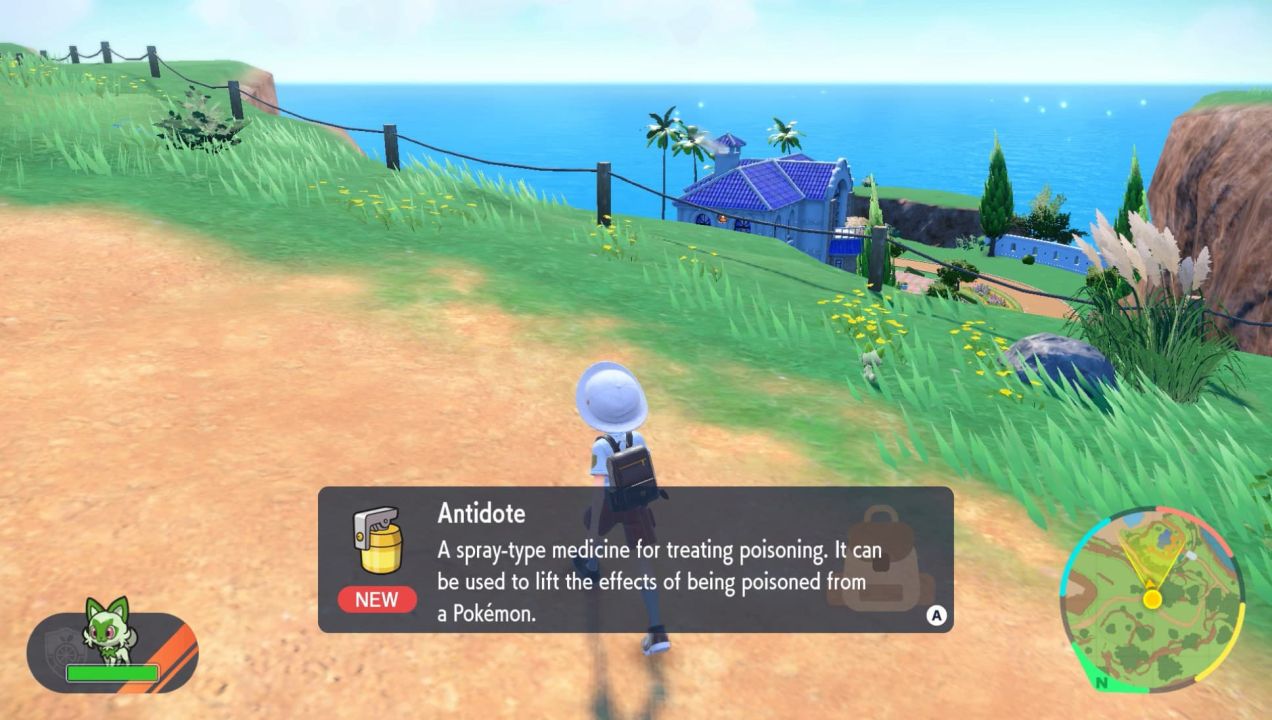 The first entry in the ninth generation of Pokémon, Scarlet and Violet straddle the line between the past and present. The general set-up to the adventure and battle system will be familiar to those who have dipped into the prior mainline entries. However, the titles also open the world up to players in a way that even exceeds what Arceus offered up previously. You are given a freedom to explore the Paldea region in a way that can feel overwhelming at the start. There were frequent times where I had to sit back and really think about where I was going to head next. The path forward isn't always clear, and that's by design.

Before you can set off for adventure, though, you need to get to class. The opening prologue of the game sees you enroll in either the Uva (if you have Violet) or Naranja (if you have Scarlet) Academy. I have been playing through Scarlet, so I have been taking classes at the Naranja Academy. To get adjusted to academy living, the Academy director Clavell not only personally offers you one of three Pokémon to carry as your own, but also introduces you to new neighbor Nemona. The three starting options for this iteration are Quaxly (water), Fuecoco (fire) and Sprigatito (grass). I chose Quaxly, mostly because of his dashing pompadour, but his water-based abilities ended up serving me well during the early portions of the game. Clavell, Nemona and fellow student Arven all play major roles in the different quest lines the title features. These quest lines ultimately encompass the goal of your schooling, which is to complete the annual treasure hunt.

The idea of the treasure hunt, which is extremely ill-defined, is a noticeably weak set-up, but the cast of characters helps make the campaign enjoyable. The main three are all unique, and I always liked seeing them pop up during the story. Clavell takes his job seriously, but there is a lighter side to his personality. Arven comes across as initially prickly but shows new depth the further you explore his quest line. And Nemona is a loyal friend, even if she constantly wants to do battle with you. You don't spend as much time with them, but the individual Gym Leaders and Team Star Leaders are all well-defined too. 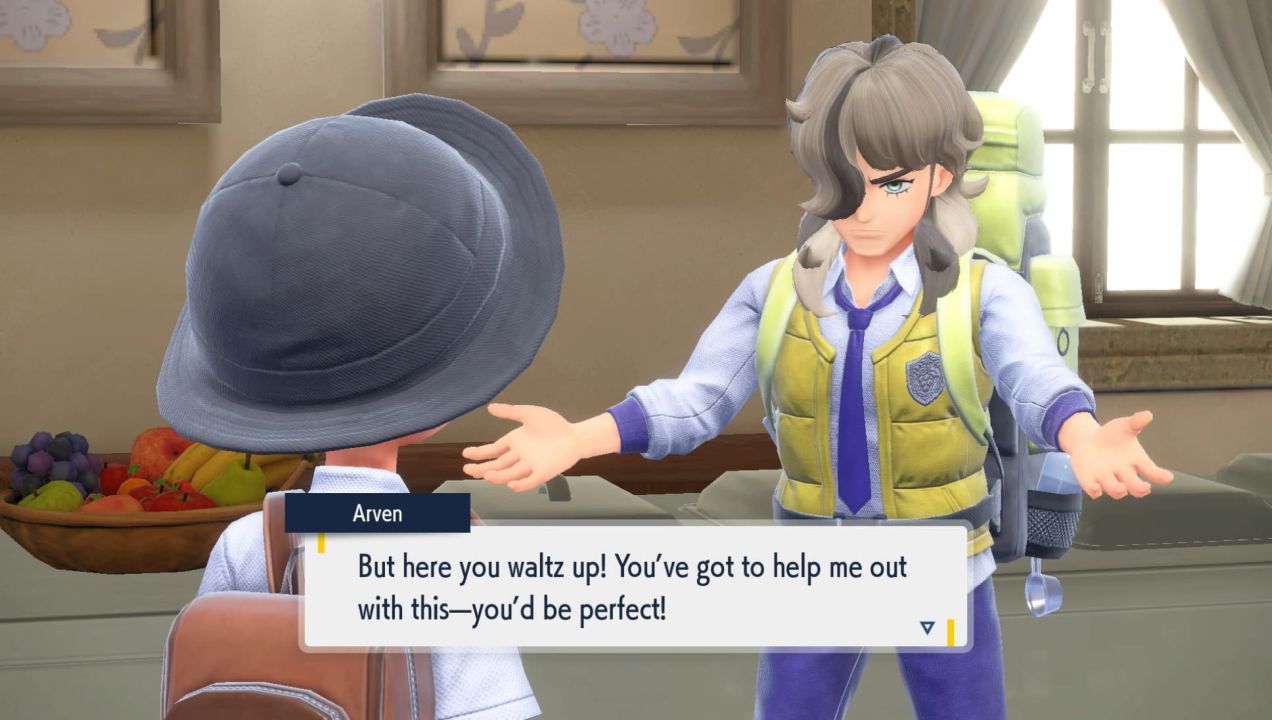 Once you set out on your treasure hunt, you essentially have three different paths to take. Victory Road is the standard Pokémon Gym storyline. There are eight different gyms spread across Paldea, with each gym being suited to a specific type of Pokémon. Once you clear them, you can face off with the Elite Four. Along the way, Nemona will constantly pop up and battle with you as well. The Starfall Street questline operates in a similar manner. Instead of Gym Leaders, you do battle with Team Star, which is a group that has been bullying students at the academy. There are five Team Star bases to take out, and again, each one is specialized in a specific Pokémon type.

The third questline, Path of Legends, has you tracking down five distinct Titan Pokémon. These legendary creatures are massive and provide ample challenge. You work with Arven to help take them down. Doing so will allow you two to acquire a Herba Mystica, which is a hard-to-find plant that Arven wishes to use in his cooking. Once you complete all three of these stories, one final quest will open. This will send you and your allies to the dangerous Area Zero, which has previously been marked as off-limits by the academy. Going into it further would spoil a lot of what makes it interesting, but I do think it provides a solid conclusion to the overall adventure.

All the people you need to battle and legendary Pokémon you need to confront are indicated on the in-game map, and you are free to tackle them in whatever order you please. However, there is no scaled difficulty in the game, so you could find yourself stumbling into a higher-level opponent than you may not be prepared for. It's easy enough to course correct though. Fast travel options are available, and like in Arceus, you can mount a Pokémon for faster travel. In Scarlet, that creature is the Legendary Pokémon Koraidon. The abilities of Koraidon are also augmented by them ingesting Herba Mystica, so it pays to work on that specific set of missions. 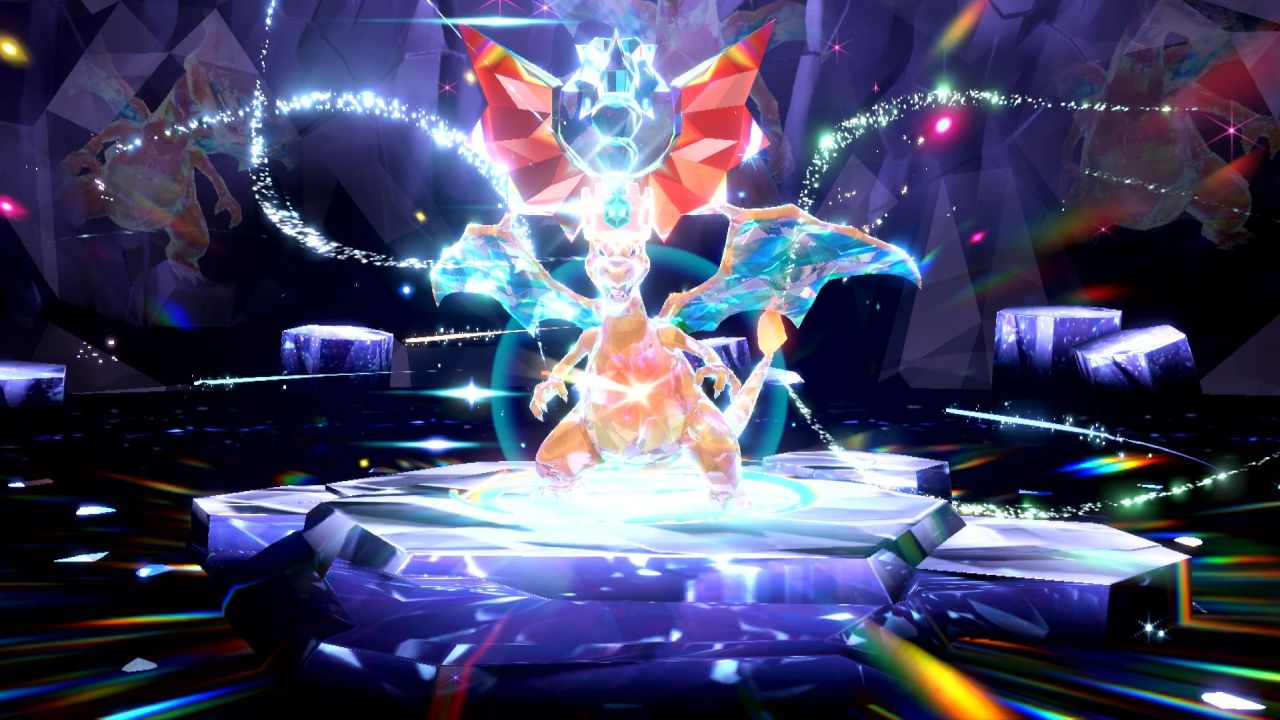 Combat in Scarlet and Violet is in line with what you would expect for the series. It's a turn-based system where battles are often won by matching up an opponent's weakness with your strength. If someone has a fire-type Pokémon, you should use a water-type. It's a simple set-up, but one that still works incredibly well. There's a reason why the series remains as popular as it has been for years now. The big addition to this release is the Terastallizing power. This is a power-up that lets you give your Pokémon a fresh crystal coating, as well as a unique Tera type that could be different from their core type. I don't know if I would classify this as a huge change to the engine, but it does lead to some interesting battles.

Getting to explore the sprawling Paldea region is the highlight of the Scarlet and Violet package. The freedom you have to tackle the campaign how you see fit is a welcome deviation from the traditional Pokémon formula. It can be a pain to accidentally end up where you shouldn't be, sure, but I like knowing that I have the option to try my hand at higher level encounters if need be. Plus, if I spend my time leveling up in these tougher areas, it makes completing other sections that should have been handled first that much easier. Other activities such as picnic planning, shopping and Raid Battles add further depth to the game.

Raid Battle serves as one of the pillars of the multiplayer modes featured in the title. These optional battles see you and three other players join forces to take on a Tetrastallized Pokémon. Completing the battle will give you the opportunity to catch the creature as well. When not engaging in a Raid Battle, you can also link up with your friends and explore the world together. For the collectors out there, this is also the easiest way for you to catch Pokémon that are unique to the specific versions of each game. It's nice to have multiplayer back, especially after its omission in Arceus, but it suffers from the same major problem that plagues the main game, which is that it's a technical mess. 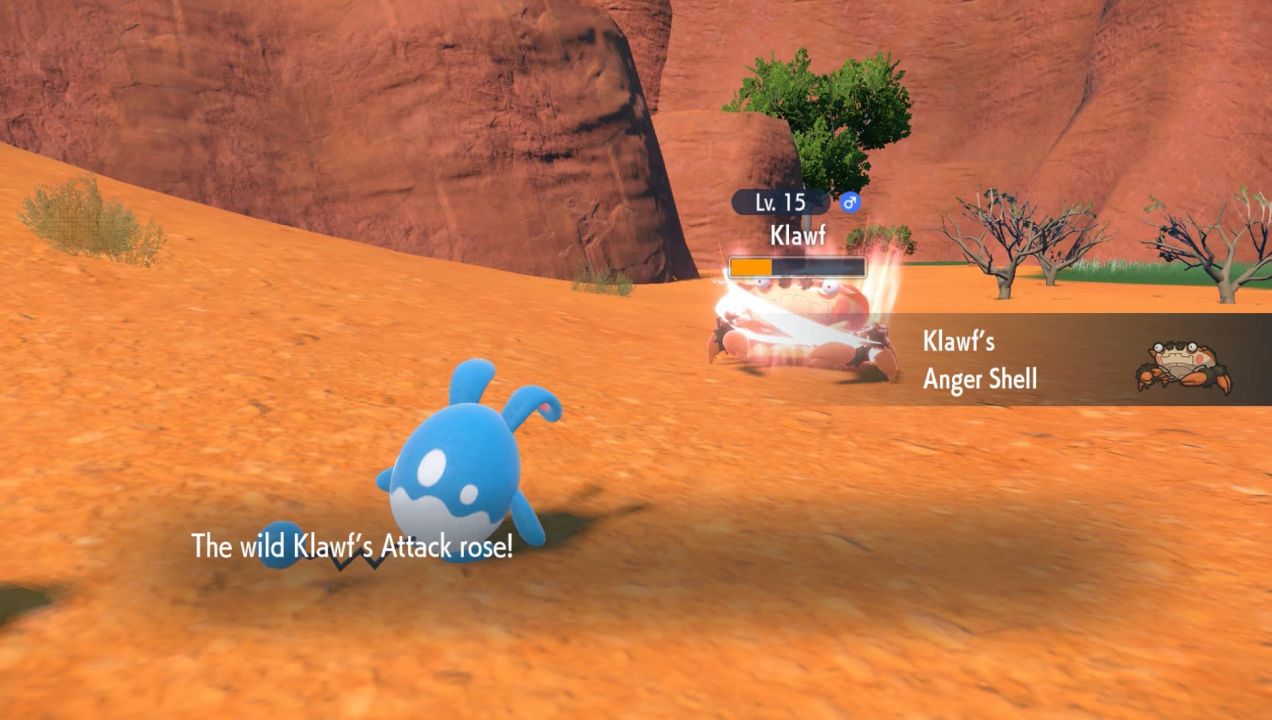 I've had my experience with titles that have pushed the Nintendo Switch to its limit in the past, but this may be the worst performing title I have played in recent memory. It's hard for me to think of a time when there wasn't lag or slow down occurring. Sometimes it would be my character moving around, other times it would be a Pokémon or another object on screen doing the stuttering. Objects frequently pop in and out of view. Ground textures will sometimes just straight up disappear for a few seconds. There are frequent load times that shouldn't be there. It doesn't matter if you are playing docked or un-docked either, as the performance is poor regardless.

It would make some sense if the title was visually competent, but this is another area where the game struggles. The world of Pladea is ripe with bland textures and reused assets. NPCs found in the region are lacking in animation and have little variety from one to another. There's little animation to the Pokémon as well. The attack animations are as lazy as they could be. It's a massive downgrade from Arceus. I know the Switch does not have as much power as the other major consoles, but as a huge release for the system, it's embarrassing how bad this looks.

It's a shame that Pokémon Scarlet and Violet were released in as poor of a shape as they did. Because underneath all of the bugs, lag and ugly visuals, there's a pretty darn good game. There's a ton of content to uncover in Paldea, and most of it is well worth seeking out. It would be an excellent start to the next phase of the franchise, but it's impossible to look past all of the technical limitations it is burdened with. This is a title that desperately needed some extra time in the oven, even if it meant getting pushed into the next year.

Our ratings for Pokemon Scarlet and Violet on Switch out of 100 (Ratings FAQ)
Presentation
48
There are moments where the art design of Pokémon Scarlet holds up well. Some of the character animations are nice, and the Pokémon are accurate to design, if nothing else. However, the environments are simply poor and pop-in is everywhere.
Gameplay
78
The battle system has been scaled back from some of Arceus' more unusual stylings, but it still is a blast to play. Exploring the Pladea region is easily manageable thanks to helpful fast travel options and the ability to mount your Legendary Pokémon.
Single Player
75
The overall plot of Pokémon Scarlet is set up under embarrassingly vague directions, but the four main questlines all have their moments. For a series not known for plotting, I was surprised at what unfolded for my character.
Multiplayer
70
At the moment, the lackluster performance of the title bogs down the multiplayer. But you can see the framework of a solid addition. The option to ride with friends across Pladea is nice to have, and it’s nice to see Raid Battles make their return from Sword and Shield.
Performance
30
Could be the worst performing first-party title I have seen hit the Switch. It doesn't matter whether you are playing handheld or not: you're going to face these problems.
Overall
57
Pokémon Scarlet is a good game undone by extremely poor performance. The open-world set-up is fantastic, and the title does a good job of letting you wander into the deep end, but not forcing you to drown. Unfortunately, the copious amount of technical issues with it prevent it from reaching the heights it should have.

All videos for Pokemon Scarlet and Violet (6)
Advertisement ▼