Several big stealth franchises have gotten lost in their own shadows. Thief had a lackluster reboot in 2014 and we have not seen any more of Garrett since. Splinter Cell Blacklist was a brilliant entry in Sam Fisher’s world of espionage, way back in 2013, and then the franchise was put on ice for reasons unknown. If these well-known stealth franchises struggle to find an audience, what hope do smaller indie titles have? Winter Ember is an isometric stealth game that is thematically close to Thief, starring another cloaked kleptomaniac who uses rope arrows and a sword. Its strength lies in level design and gadgetry, but there is a lot of potential that often fails to materialize. 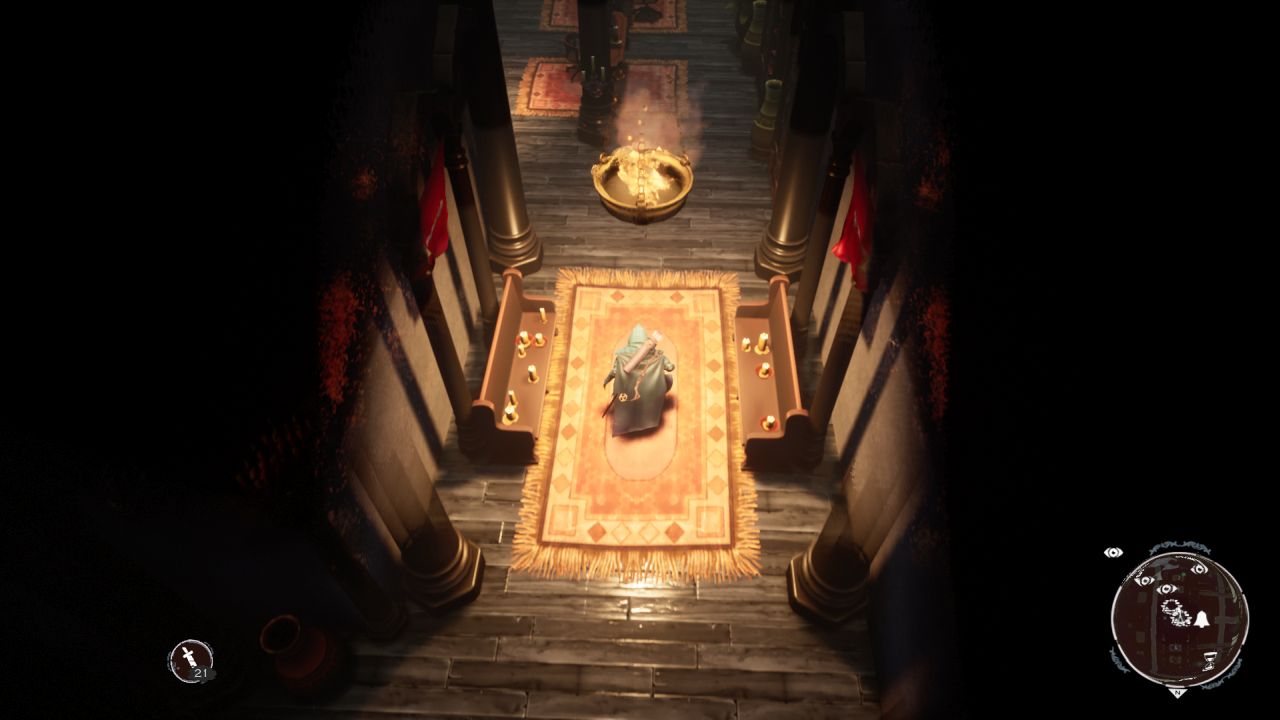 Arthur Artorias is the sneaky hero of this tale. The opening cutscene takes place long before the game’s main events. In it, Arthur returns to the family mansion with a woman on each arm. His father wants to chat, but the old man only talks gibberish about there being no time. As Arthur sleeps, ruffians break and enter, killing one of Arthur’s female companions and leaving him disfigured. Eight years have gone by and Arthur is returning to the city of Anargal to get revenge. If this summary seems like it is missing information that is because the intro is woefully short on detail. We don’t know who attacked, what happened to Arthur’s family, or why his surviving companion rescued him and trained him to be a covert expert. Some mysteries are revealed, in due time; but the intro is a missed opportunity to set up a more robust world.

The opening cutscene is presented like a cartoon anime with a familiar cliché style. Its visual design is a little inconsistent, yet the infrequent cartoons have an appeal when the overarching story gets a workout. The mainline story is thin, especially in the first half. We don’t initially know the main players, or why guards on the street attack Arthur on sight. A few ‘infected’ shamble around like zombies and vomit acid, yet we never learn why. Notes and books that describe the world are rare, despite Arthur sneaking past many bookshelves. The game has plenty of dialogue—all fully voiced—but much of it is isolated to generic side quests: recovering a woman’s necklace, helping a Romeo get his Juliet by faking an assault, collecting mushrooms from a swamp, and finding the perpetrator that poisoned the pumpkins. These quests are fine, interesting even, but they could fit into any similar game, leaving the wider world without ample framework. 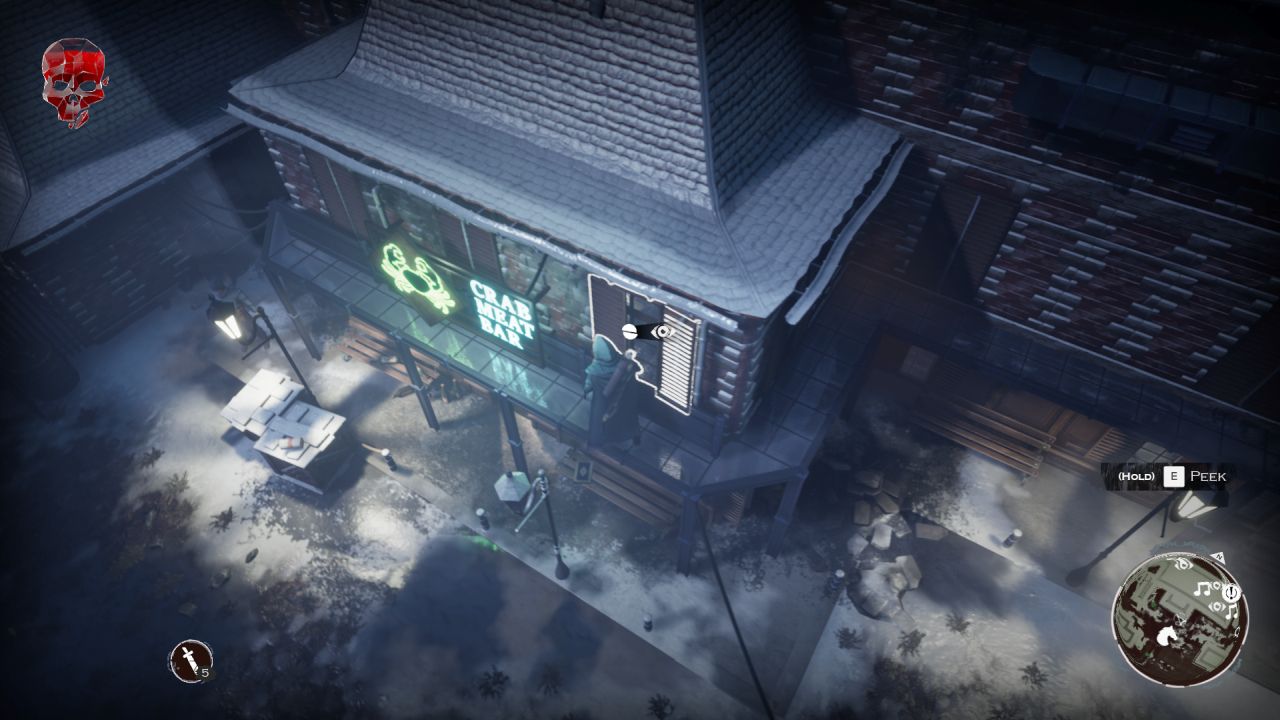 And so the world design does most of the talking, and fortunately the levels Arthur explores are a highlight. Winter Ember uses the isometric perspective well, with full rotation of the camera and appropriate hiding of foreground objects when sneaking inside buildings. There are a few large regions to visit around Anargal, with cloaked guards strolling cobblestone streets, civilians lingering in brothels, and shrouded cult members blocking remote woodland paths. Dimly lit interiors contain golden goblets and glittering gems, to fund Arthur’s nefarious machinations. Black market dealers are found in dark corners, including in the middle of enemy bases, and they sell useful things like health, lockpicks, and arrow supplies.

The areas are fairly well designed. Interiors have a few different levels, so there is adequate depth to the environments. There are even a few secret passages and safes with codes hidden behind paintings. Sewers and horse-drawn carriages allow Arthur to fast travel to the different regions. Shrines function as save points and provide a way to upgrade predictable skills, such as lockpicking, footstep volume, and inventory space. Some parts of the world are inaccessible at first, but it only occasionally feels like Arthur is funneled down linear paths.

There is almost never just one way to get to a target location. Alternative routes are a consistent feature in both side missions and main quests. Pick the lock on the front door and sneak through a few guard patrols. Explore around the side of the building and find an open window that takes you through a vent and side rooms. Climb about the rafters and swoop down to snoop and loot. Or just use one of Arthur’s many special arrows to create a new access point, assuming you have the resources. 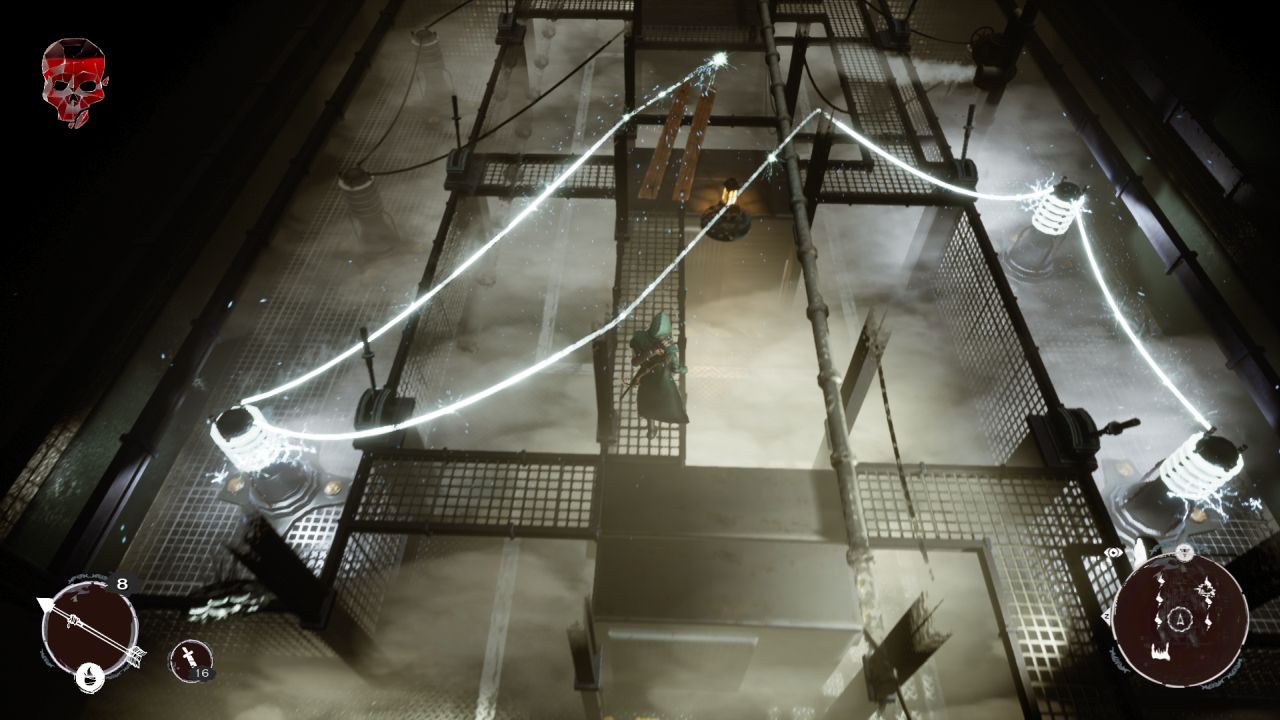 Arthur can craft arrows that can help take down opponents and navigate the world. Arrowheads, shafts, and a special modifier are combined when the resources and blueprints are available. Combine a claw tip with a rope modifier to make an arrow that latches onto specific ledges, to access to the floor above. Water arrows put out flames and fire arrows remove frozen barriers. Even electrical arrows charge generators to make equipment work again. When dealing with opponents, it might be as simple as combining smoke with sleeping gas to knock out three guards at once.

While there are many useful arrows, they become unwieldy as the game progresses. It is likely your inventory will become cluttered. And despite completing all but two side quests, one of which broke, the blueprint for water arrows was never located and thus could not be created. A few other blueprints were never found as well. That meant relying on the game to throw arrows at Arthur when the need presented, and it was not great at that. Black market dealers were also limited with their supplies, which meant certain components were rare. With these limitations, chances are you will need to craft a particular arrow when coming across an obstacle. This just slows progression down and is clumsy as you equip it manually almost every time. Fewer arrow types and a better distribution would have helped sharpen Arthur’s journey.

Thankfully, you don’t need arrows for stealth. Arthur can sneak in the dark and get behind guards to knock them out or slit their throat. He can manually put out candles and other light sources, making him harder to detect. Bodies can be picked up and hidden in the long grass, to maintain covert status. Arthur can also peak through keyholes or windows to see whether there are any threats. This is critical because the game hides enemies out of Arthur’s line of sight. This is a great method of making stealth fair from the isometric view, while letting players rotate the camera freely. It was still fairly common to bump into guards, who can be hard to see in the dark. 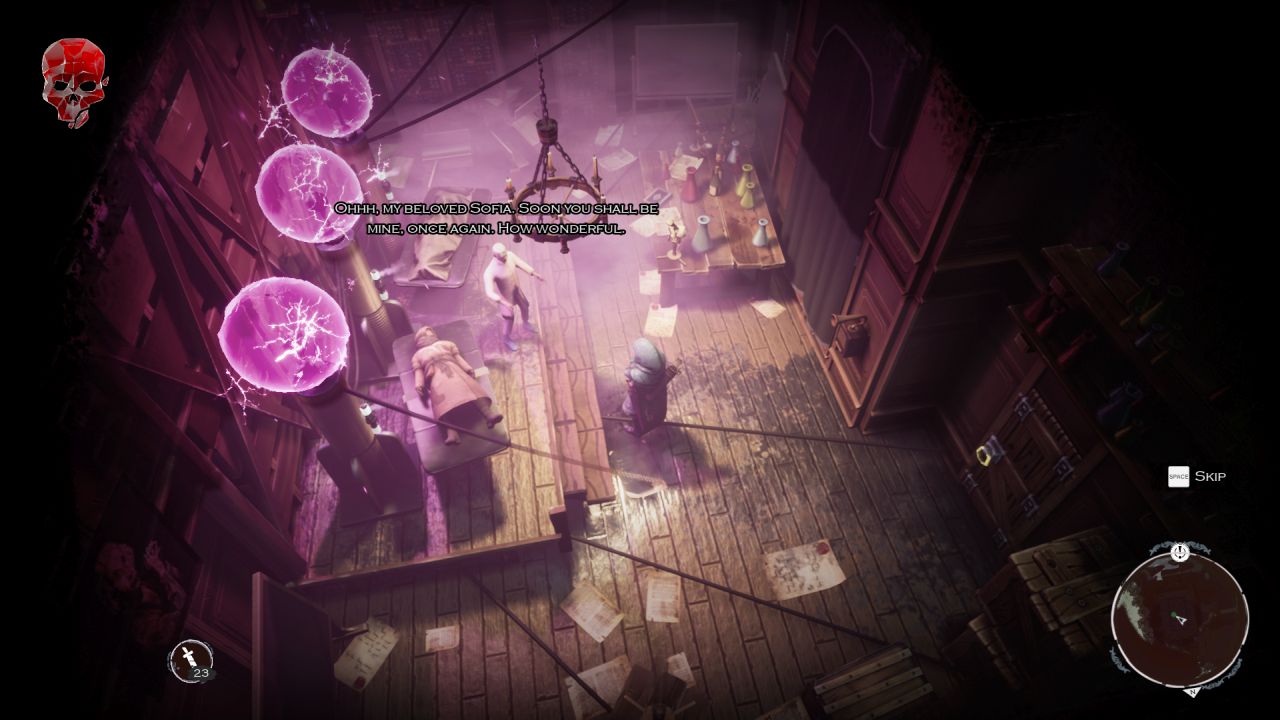 There are a few shortcomings with stealth. First is that there is no reliable method of distraction. Extinguishing flames near guards incites no reaction. Even explosive arrows are ignored when not close enough to damage. Sneaking behind enemies to take them down is clunky and can lead to unwarranted detection. It’s also a pity that knocking out guards is ineffective because they wake up so quickly. Killing them is best (bodies remain where they died for the entire game). Sometimes this means putting them to sleep from range and stabbing them as they stagger into consciousness.

Once detected, you can run and hide or stand and fight. Arthur‘s sword and throwable daggers do most of the work in combat. Standard parry, block, and dodge are here to use. The combat works okay. Against single targets it’s easy to parry and win. But several enemies at once can drain health. There is not a huge number of enemy types. Guards have swords and maybe a shield. Gang members have axes, which are not really any different. Then there are the melee types, like the aggressive zombies and the stupidly annoying dogs. Stealth is typically encouraged but it’s not the end of the world if a guard spots you lurking about.

The game takes about 12-14 hours to complete and, while this is not bad value, it lacks refinement. There is a cover system but it strangely does not work when standing next to a wall; so you have to step back, potentially bringing Arthur into the light. The AI got stuck in a few places, including during one boss fight. Even the 2D map can be hard to follow with its blended monochrome design. Each playthrough also only has one save (no manual saves) so you have to play the whole thing again to get a different ending. And while you can take those alternate routes during a replay, they do not make a huge difference in the end. 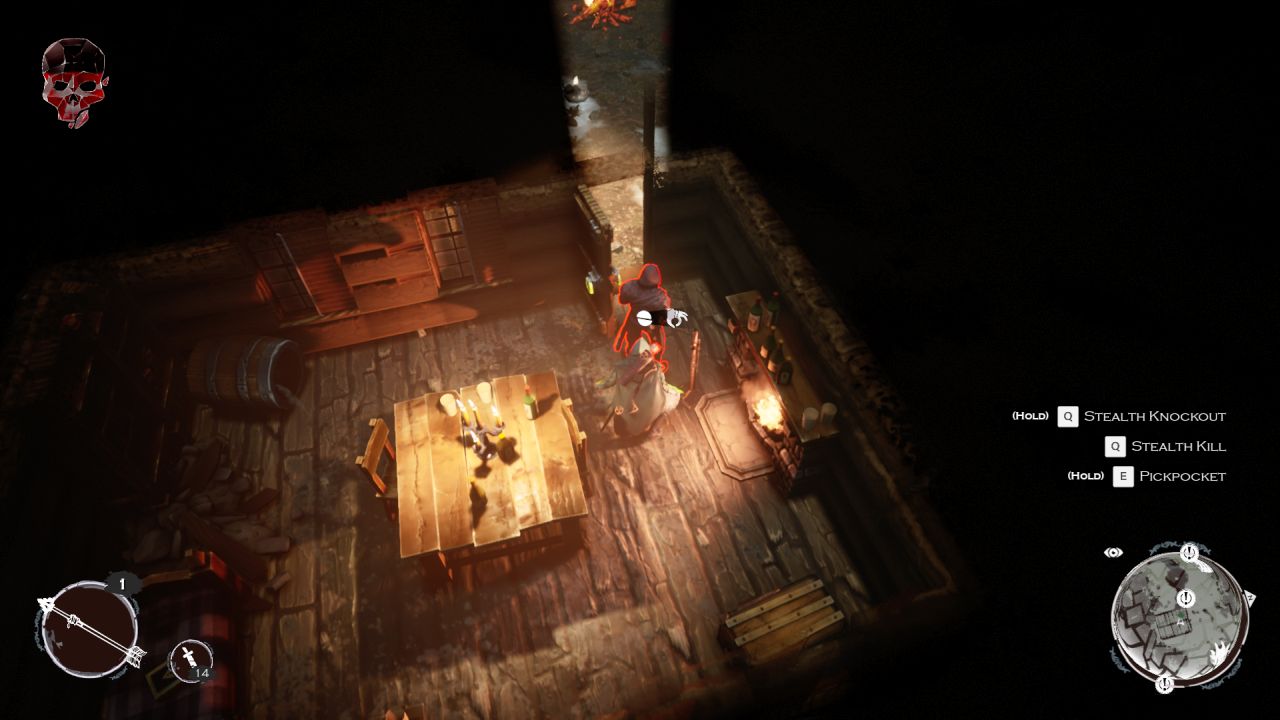 Winter Ember is the story of unrealized potential; an isometric stealth game that stands unsteadily on the shoulders of giants, like Thief. And while those giants have been MIA for years, Winter Ember is here to play right now. Its stealth is serviceable, but missing a few pieces and balance tweaks. Its many different quests are fine, but the overarching story takes too long to provide detail. Crafting various arrows is neat but ultimately clunky. Fortunately the world design and alternative routes are a highlight, almost good enough to counter the game’s general lack of refinement. In a world where stealth sequels are rare, Winter Ember would benefit from one more than most.

Our ratings for Winter Ember on PC out of 100 (Ratings FAQ)
Presentation
75
Good world design with interesting interiors and moody cities, all using the isometric perspective quite well. Anime cutscenes are infrequent and a bit inconsistent, but not bad.
Gameplay
65
The stealth is mostly fine but just missing a few layers and tweaks. Combat is alright, although nothing complex. The exploration side of things is good.
Single Player
45
Without much story in the first half, the game struggles to build its world beyond a mere shell. When more story comes along, it’s rife with clichés and missing details.
Multiplayer
NR
N/A
Performance
(Show PC Specs)
CPU: AMD Ryzen 5 3600
GPU: XFX RX 480 GTR Black 8GB
RAM: 16GB DDR4
OS: Windows 10 Pro 64-bit

70
One side quest broke completely. There is sadly only one save, with no quick-saves or manual saves. Has some minor framerate drops but performance is generally stable.
Overall
65
Although lacking refinement, Winter Ember is an adequate isometric stealth game that might spark joy for fans of the Thief franchise. With a more robust story, tidier stealth, and narrowed focus, Arthur might have given Garrett a run for his stolen loot. 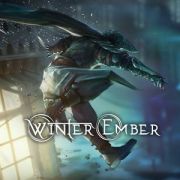