I shot the Sheriff, but a werewolf ate the Deputy

Tumbleweed are a common sight in Westerns. You may be able to picture a dry spherical bush rolling across the dirt as a gunslinger enters a frontier town. They typically represent the desolation of the Old West, but tumbleweed roll for another purpose. Tumbleweed detach from their roots and travel with the wind in order to distribute seeds far and wide. Weird West is an isometric Action RPG that has a lot in common with the humble tumbleweed. It tells the story of five characters that leave their mark as they shoot, steal, or sneak across a strange land, one after another. Weird West is a supernatural twist on the Old West, with zombies, werewolves, witches, prophets, and men cursed to look like pigs. It is a great role-playing experience due to high player agency, strong replayability, unique tone, and it would have been excellent if not for a few bugs and camera annoyances. 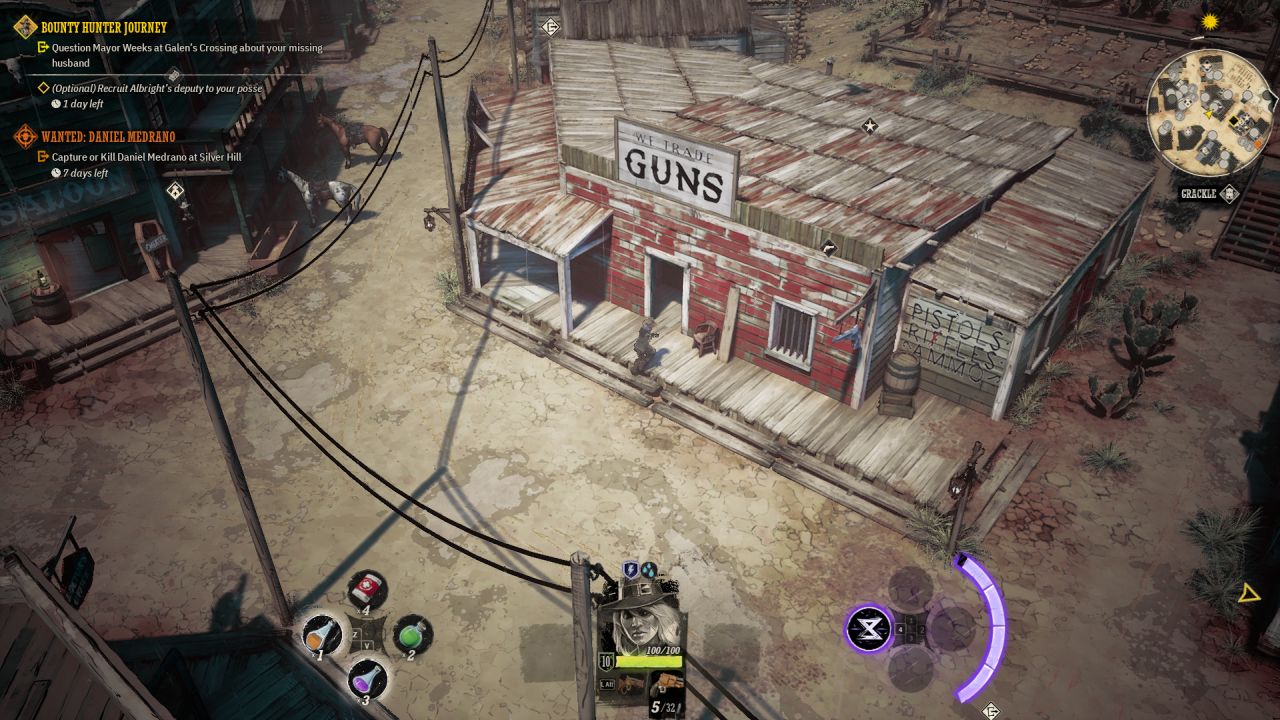 Weird West’s story takes players through the journeys of five heroes, told in sequential order. Through their eyes we see a twisted version of the Old West, sometimes from opposing sides. In the first journey, you play as a bounty hunter in search of her husband, taken by a gang that treats humans as food. Then you become a man cursed to look like a pig and must prevent others from the same fate. The third journey is about a native who seeks a lost gold mine. After that, you step into the paws of a werewolf, trying to build an army. And, finally, you become a prophet who has dreams about the end of the world. The individual journeys are interesting and succinct, with full story arcs for each. But there is a tangible connection betwixt them. All are branded with the mark of the Passenger and so there are higher powers at work. You will meet a strange witch and a creepy child, among others, that set a unique tone to keep the overarching narrative working away. With these five distinct stories, the game refreshes itself every five hours to keep that tumbleweed rolling.

Once each journey ends, you don’t have to start over. Your past selves can be found in the world, so you can recruit them to help in combat or just get their (your) gear and leave them be. Even the contents of the horse’s saddlebags are shared. Perks earned during each journey remain, ranging from buffing health to increasing crouch-walk speed. One perk boosts jump height so you can climb atop houses and enter through chimneys, like Santa Claus with spurs. Some things do not carry over. Ammo and money must be reacquired, although transferred items can be sold and you can always steal, which works a bit like Skyrim. All of the character’s abilities start from zero each time; some are unique to each character but most are linked to weapon types, allowing players to try out explosive shells or electrified bullets. So the five-character setup finds itself in a nice middle-ground between starting anew and building on what came before.

The larger world is presented on a 2D map that you can travel across by foot, or more quickly by horse. Important places are marked and others can be discovered by simply roaming. Towns contain traders, quest givers, and mercenaries you can recruit. Mine shafts are home to precious metals, treasure chests, and hostile gangs. Farmsteads, temples, camps, haciendas, buried treasure, and more are scattered around the place. You can even camp in the middle of nowhere and hunt animals for food. Each level is self-contained, and both the structure and placement of the minor locations alters if you restart the game. Some choices affect subsequent journeys too, so there is decent replay value. The main quest levels and major towns have fixed layouts and are larger in scope. Traveling across the world also creates random mini encounters with animals, roaming traders, monsters, that creepy witch, or gangs trying to rob you. Walking to the edge of any level (or getting on a horse) will let you travel on the world map again. 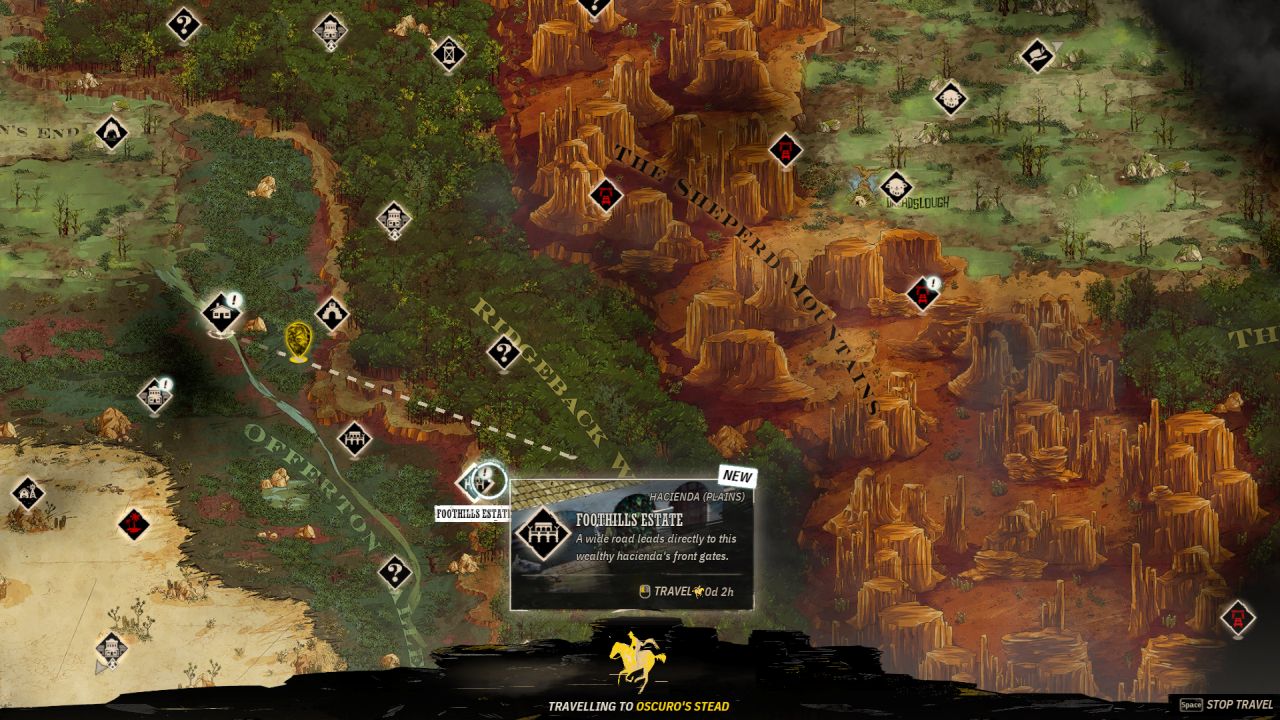 Although there is randomization, there is also repetition. Bounty targets you can kill (or capture) might be found in the exact same place, in the exact same cave system. Small things change within the cave, like the number of enemies and loot. The cave might have piles of bones and carcasses, if you’re hunting a flesh-eating siren monster instead of a plain gunslinger. Even haciendas have duplicated building layouts and similar farmland surrounds. The upside is that subsequent targets can be killed quickly, but returning to old areas is still a drag.

Shooting your way through is often the most efficient way to complete missions, although ammo can be limited. There is a cool slow-motion dive that works like Max Payne, just from the distant isometric perspective. You can crouch and shoot over obstacles, so positioning will reduce damage. Weapons are typical: revolvers, rifles, shotguns, and various melee types, all of which can be upgraded. Dynamite, molotovs, and electric grenades can also dish out good damage, although throwing them is clumsy (a tactical mode slows everything down, which helps). Enemy types are varied, with outlaws, shielded witches, snakes, hovering wraiths, and dynamite-throwing mine-crawlers. There is a good mix of ranged and melee attackers, with the former able to hide behind cover. The isometric camera works fine in the sparse open areas, but in towns or buildings, the foreground gets in the way. Although the camera freely rotates, and zooms three levels, it locks into a direction when aiming. So if you dive or jump with obstacles nearby, targets can be unnecessarily hard to hit. The best version of Weird West is probably one with a close third-person camera, but the isometric view does give it an appealing style. 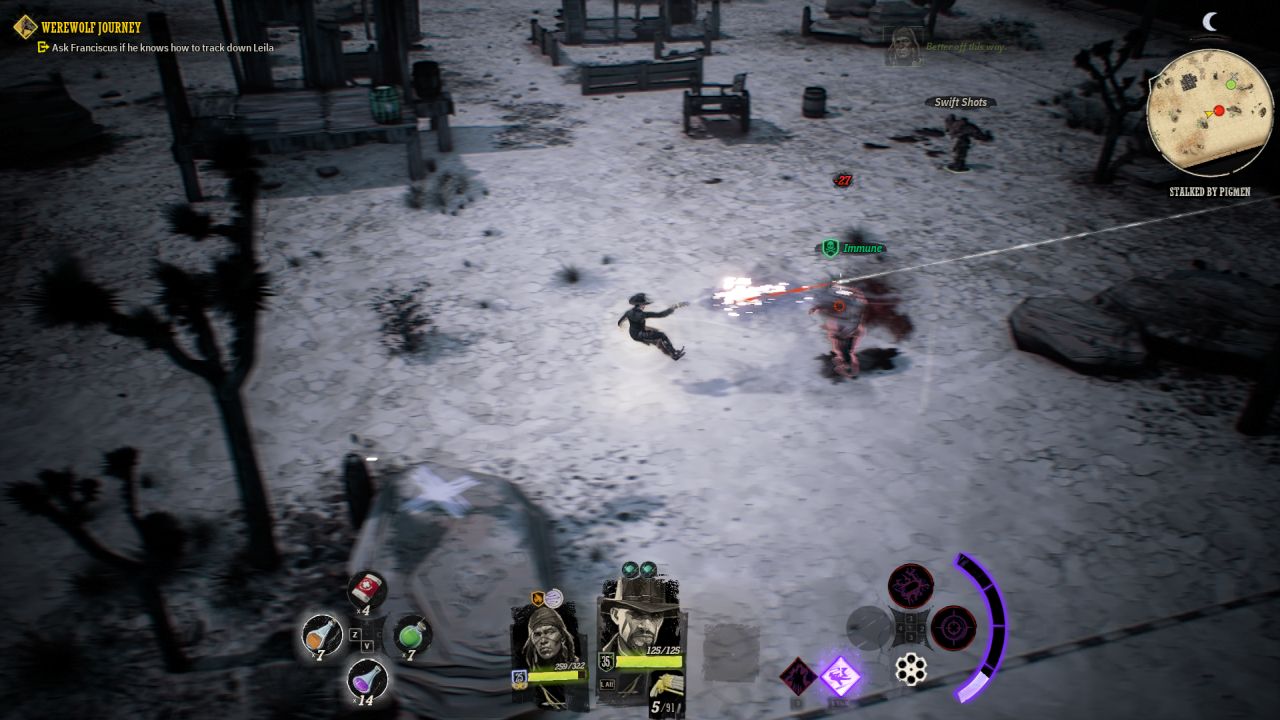 Stealth works better from the isometric view and is reminiscent of a simpler version of Desperados III. The vision cones of enemies are displayed on the 2D mini-map, so you can sneak through patrols a bit easier. There are bushes to hide in or you can just crouch behind barrels or wagons. Companions are invisible, so you don’t have to worry about them messing it up. There are non-lethal takedowns from behind, but enemies never wake up their unconscious friends. Ranged stealth options include a bow or a silent ability on the rifle. Bodies can be picked up and moved, although enemies don’t search for long if they find a dead friend. Some more tools for stealth would have been nice, like traps, lures, and more places to hide guards. One unusual feature of stealth is that the AI changes patrol routes on-the-fly. Quick-loading might see enemies divert, like they’re constantly rolling the dice. These adaptive patrols are nice and will keep you on your toes during covert play.

There is a lot of interactivity as you engage in combat or stealth. Fire pits can cook food to provide health, or you can use the flames to get a temporary fire arrow that will set alight a pool of oil. Locked doors can be picked or blown open with explosives. Buckets can be held under water sources to fill them up, to drink for health or to create a puddle on the floor when thrown. Bodies can be buried, or exhumed for some classic grave robbery. There is a fire propagation system too, like Far Cry 2, and it causes plenty of chaos during the combat.

The world allows a lot of player freedom and adapts to whatever happens. If you accidentally kill a person, a witness might escape and come back later with a vendetta. Killing a whole town (by accident, I swear) will mean it becomes abandoned for a time. And yes, you can kill your past selves, though sadly there is no reward. The game has a reputation system which increases when you do good deeds. Some characters become ‘friends for life’ and will return at random during combat, like the mysterious stranger in Fallout. But having a low reputation, from murder and mayhem, could mean spending time in jail or, worse, becoming the target of random bounty hunters. Weird West is definitely concerned that you experience the repercussions of your actions and this is what makes it fun. 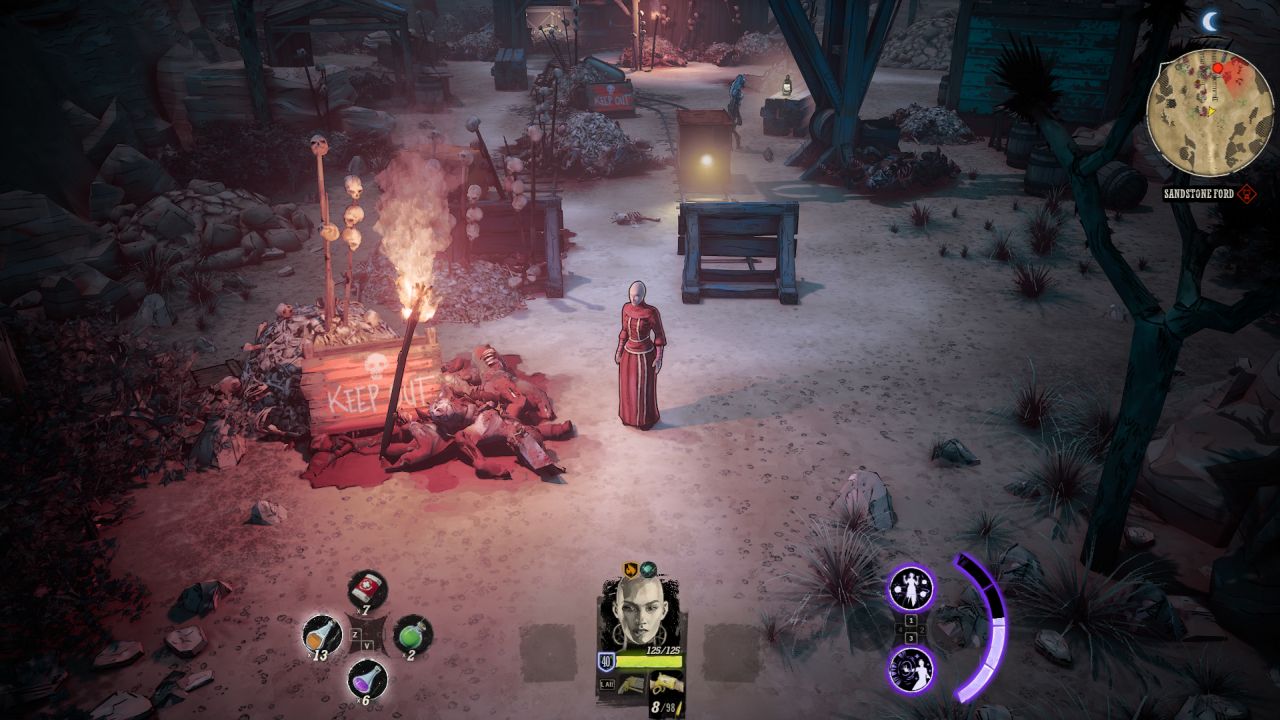 In visual presentation, the game has a brilliant and distinct style that is leveraged well from the isometric perspective. The world has a cell-shaded look, but this is subtle from the higher camera angles. It features a good variety of locations, including forests, swamps, deserts, oases, ghost towns, and more, with a few weather effects and a full day-night cycle. The boundaries of levels look like the torn edges on a map, which is a cool artistic feature. There is good detail in the environment and the game provides lots of rewards if you search thoroughly. It also has a cool vibe, with an electric buzzing sound becoming a prominent feature to represent the supernatural component.

Less appealing are the handful of bugs, most of which are related to the AI navigation. Companions might stop following, leaving you to fight alone until you rezone. Sometimes companions just end up in the wrong place, like on the level above in a multi-storey building. One friend caught fire and continued to roll endlessly, unable to put out the flames. The AI is rather jumpy too. Kicking over buckets can make them scramble about to look for the defiler of their precious container. Even horses were sometimes knocked unconscious in towns, with no enemies in sight. The AI needs some tweaks to bring it up to the high standard set by the rest of the game. 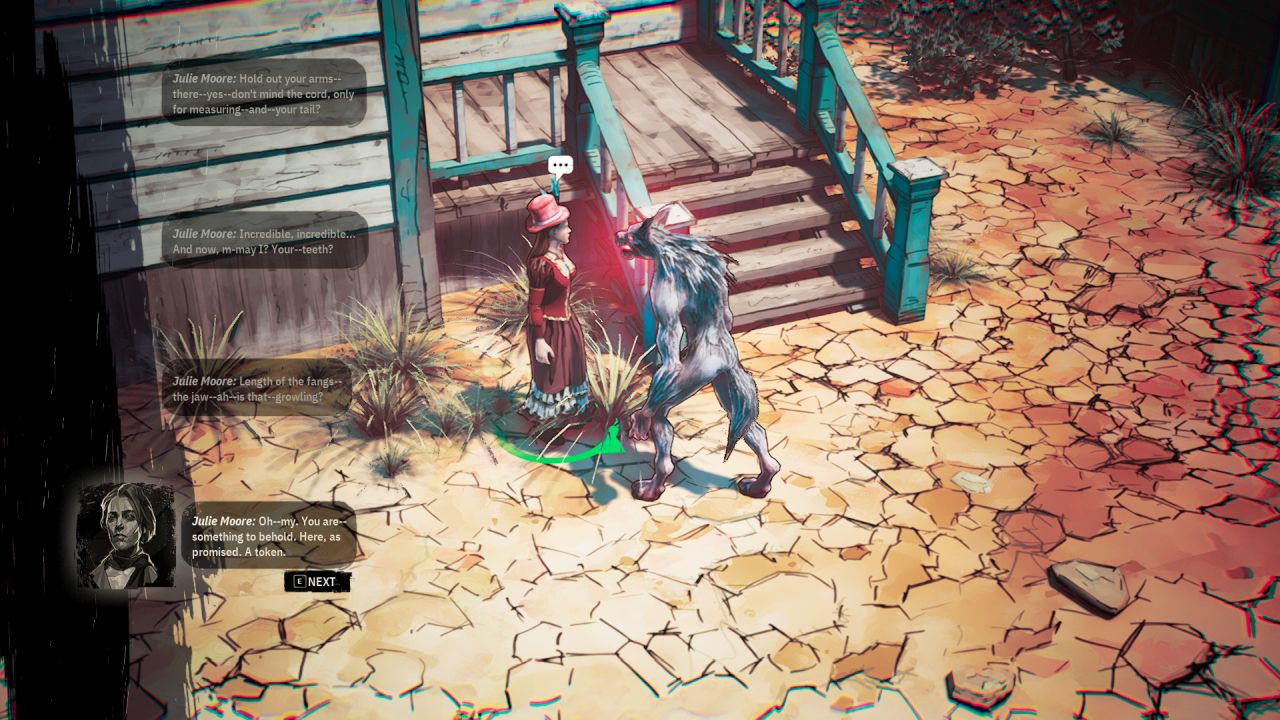 Whether you are looking for a new take on the Old West, or just want a good Action-RPG, Weird West is a great option. Its story is continually refreshed because the narrative progresses through five characters as they wander across the land in the 25 hour adventure. The action and stealth are both good enough to make the gameplay interesting, with depth via its many sandbox interactions. But the best feature is how the world adapts to player action, sending help for being a good cowboy or punishing murderers with a visit from bounty hunters. Plus there is the awesome visual style, a cool supernatural tone, and good replay value. Its main faults are some camera issues, repetition, and AI navigation problems, but they do not hurt the experience too much. Most will enjoy their time with Weird West’s freaky frontier, no matter which direction the wind takes them.

Our ratings for Weird West on PC out of 100 (Ratings FAQ)
Presentation
80
Weird West has a great visual style that uses cell-shading and an isometric view. There is good detail in the environment as well, with some randomization in levels. The supernatural themes and general vibe are also great.
Gameplay
80
Both stealth and action are good, but it is really the interaction with the environment and the outcomes from actions (via reputation) that make the gameplay excel.
Single Player
80
Told through five different characters, linked by a mysterious mark, the narrative is both intriguing and concise. It will take about 25 hours to complete and the replay value is good.
Multiplayer
NR
None
Performance
(Show PC Specs)
CPU: AMD Ryzen 5 3600
GPU: XFX RX 480 GTR Black 8GB
RAM: 16GB DDR4
OS: Windows 10 Pro 64-bit

75
The game runs fine most of the time but the AI does have navigation issues.
Overall
80
Weird West is a brilliant Action-RPG sandbox with an alluring supernatural undertone. The story finds a regular beat as it jumps through five intriguing characters. Both stealth and combat work decently from the isometric perspective, with good interactions, and only some camera issues and AI navigation quirks prevent it from striking a deep vein of gold. 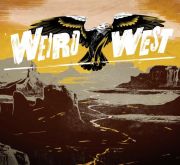 All videos for Weird West (5)
Advertisement ▼