Dragged through a violent montage

Amanita Design has built their reputation around whimsical and lightweight adventure games. Aside from their excellent puzzle-platformer from last year, Creaks, their recent titles have been short experiences made up of independent puzzle screens with amusing animations. Happy Game is another brief adventure. Its gameplay is a bit like Chuchel but it diverges because of a horror theme and violent inclinations. Once again, the impeccable visuals and bizarre characters ensure that Happy Game is a pleasure to look at. Unfortunately simple puzzles and other issues make it one of the least effective games from the studio. 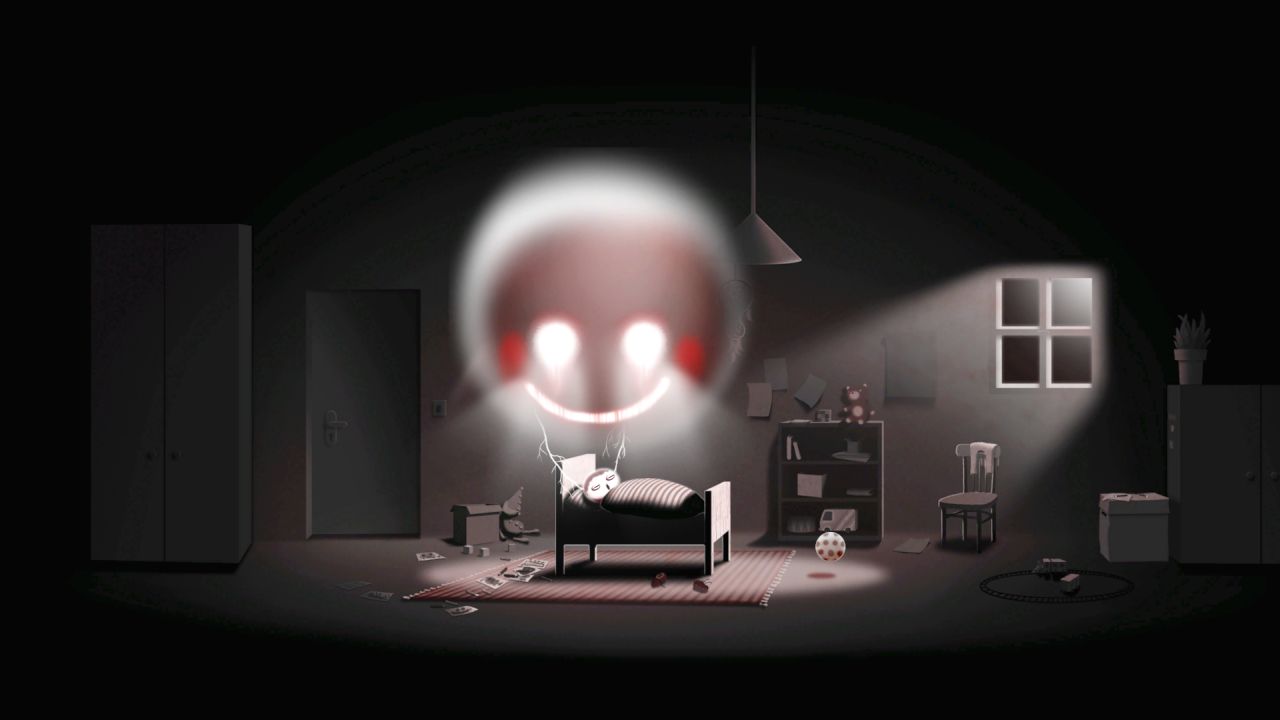 Happy Game begins with a boy entering a series of nightmares. The nightmares seem to be generated by a menacing smiley face that enjoys inflicting torture. Each nightmare preys on the boy’s fear of loss, by taking away something precious. The boy (you) must then follow the stolen item across the screen and try to regain ownership. He will pursue a ball, a rabbit toy, and a dog through random and frequently unconnected scenes. Each scene throws up an obstacle or has items/characters that hold the personal item hostage temporarily. Like Chuchel’s hunt for the cherry, the goal is simple and there is not much story that connects each nightmare, in what is essentially a mosaic of weird but simple puzzles.

The boy’s nightmares evoke a more violent theme than Amanita’s typical weird. There is plenty of cartoon blood, and the tasks the boy must perform are rather sadistic. Bunnies must be force-fed carrots and then cut in half. Little heart-people will explode after you take away their favorite items. Even a giant smiley face will need to have its eyes plucked out. While this sounds gruesome, the game is rarely scary or unsettling. Part of this is because there never seems to be any danger. When something big and mean gives chase, the game takes control and you just sit and watch. Even when the boy’s head is removed, he merely rolls forward until the rest of his body is relocated. The ‘scariest’ parts are when the game flashes abrupt and high-contrast screens like it’s trying to incite an epileptic fit, but these are just annoying. The shift to violent horror also means the adventure is less amusing than Amanita’s previous titles. 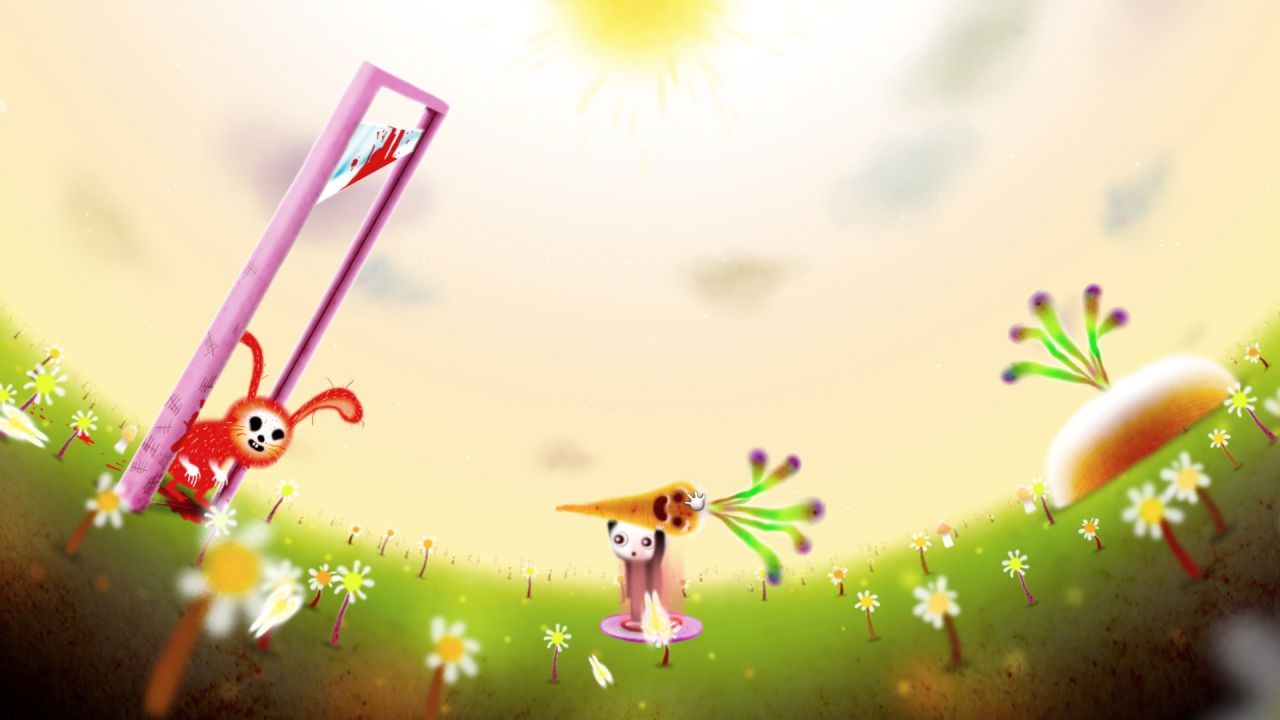 Moving the boy across the screen is done by dragging him with the mouse. Rather than a traditional point-and-click system for movement and interaction, the game defaults to a click-and-drag method. This extends to most puzzles, as many things are fused together and must be ripped apart or pulled sideways, including levers and limbs. This control system occasionally builds a more tangible connection with objects, but it also results in clumsier movement and imprecise interaction. Moving the boy is tedious because it just means holding the mouse button for long periods. And for objects, it is not clear if dragging something will result in any change, nor is it obvious how far things need to be pulled or pushed before something gives way.

Solving puzzles is just a matter of pulling at everything. Since the number of movable objects on screen is few, the puzzle solutions are easy and bring no satisfaction. Other puzzles are completely random and nonsensical, especially in the first and last nightmares that feature more independent challenges. As an example, there is one puzzle where a character hides a red ball under three cups and shuffles them around. You might expect to progress by finding the ball or understanding the trick, but instead all you have to do is drag the character’s hat upwards. Trying to make sense of each situation is pointless. So not only are many challenges solvable by click-dragging like crazy, it is often the quickest way to do it. These easy and random puzzles do make the game accessible to many ages and abilities, although the violent setting is at odds with this approach.

The art design is fortunately no slouch and is often reward enough for playing. Many scenes could be taken out and hung in an art gallery for a weirdly alluring exhibition. The composition of sharp colors, smiley faces, curved landscapes, and disturbing character designs works great. The violent and bloody animations help to keep it apart from Amanita’s previous works and provide additional contrast when friendlier backgrounds are used. Just being a part of these strange paintings is good fun. Less effective is the music. The songs mix unusual sounds together, like tribal beats, spray-paint can rattles, distortions, and what sounds like an elephant. It ends up being mostly unintelligible and never comes close to the musical highs of their previous games. 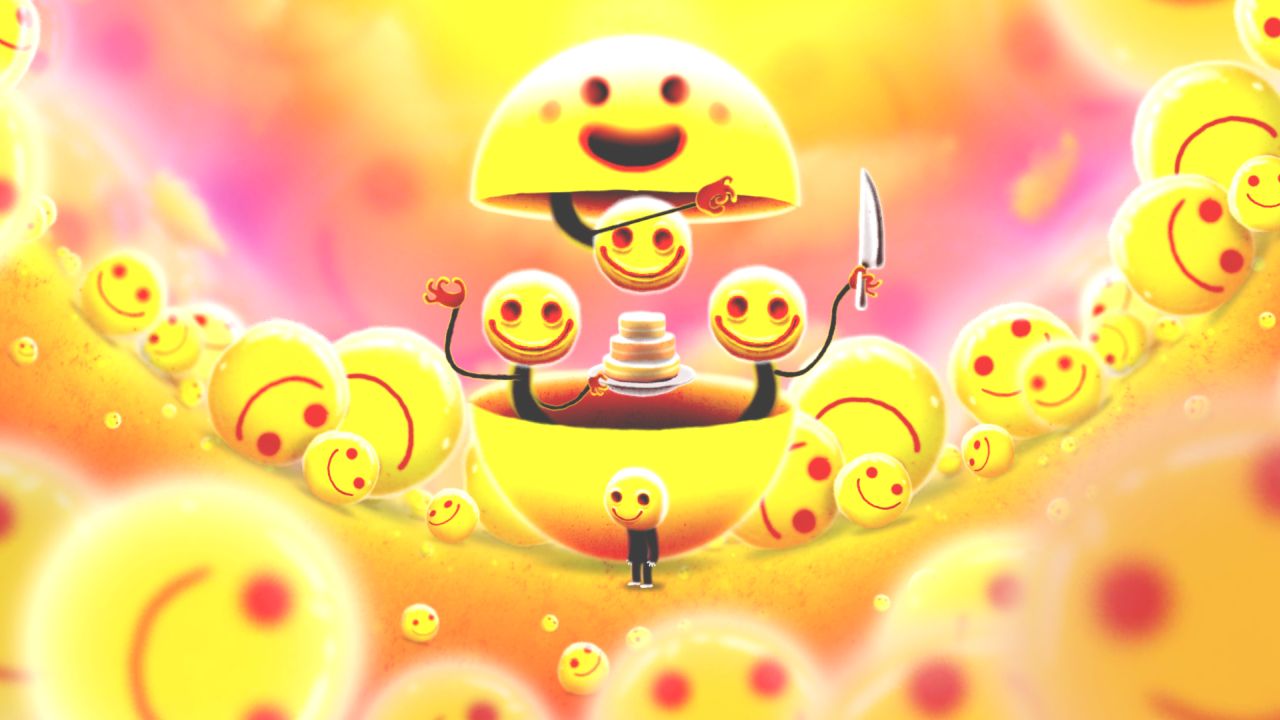 Happy Game may not be as good as Amanita’s other efforts, but its flair for violence pairs well with the developer’s artistic talent. The animations of strange beings captivates, even if the music accompaniment is poor. Sadly the puzzle design is either too simple or random, with few satisfying moments to be found across the two-hour adventure. The darker horror setting is rarely disturbing and instead more of a nuisance as the screen flashes aggressively at random. Even the basic control mechanism, focusing on dragging things around, becomes too tedious for a game that is just a series of simple mini-puzzles. Fans of either Chuchel or Amanita might enjoy it, but Happy Game does not find the right gameplay composition to match its beautiful violence.

Our ratings for Happy Game on PC out of 100 (Ratings FAQ)
Presentation
75
The visual design is excellent with great contrast between violent scenes and colorful backdrops. All the animations are done well, although the abrupt visual flashes are super irritating. The incoherent music is generally a letdown.
Gameplay
50
The puzzles are either too simple or too random, so the challenges rarely bring satisfaction. Even the click-drag method of interaction is clunky.
Single Player
50
It will only take two hours to get through Happy Game and there is not much story here as you follow a boy trying to overcome some nightmares.
Multiplayer
NR
None
Performance
(Show PC Specs)
CPU: AMD Ryzen 5 3600
GPU: XFX RX 480 GTR Black 8GB
RAM: 16GB DDR4
OS: Windows 10 Pro 64-bit

95
No performance issues.
Overall
63
Despite the alluring and violent art, Happy Game is dragged down by simple and random puzzles, annoying screen flashes, and awkward interactions. 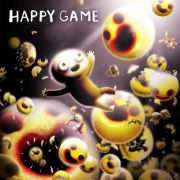 All videos for Happy Game (2)
Advertisement ▼