Fun puzzles and simple mini-games, with a cherry on top

Everybody needs a cherry in their lives. Not a literal cherry, despite how delicious the red fruit may be, but a figurative cherry that represents a goal. Such targets give us focus and can lead to interesting stories and personal growth. Chuchel, by Amanita Design, is a game about a bizarre character with a singular goal. That goal also happens to be a cherry. Like Amanita Design’s previous games, Chuchel is a mix of puzzles and strange creatures in a delightfully animated world, although it is not quite as consistent as its predecessors. 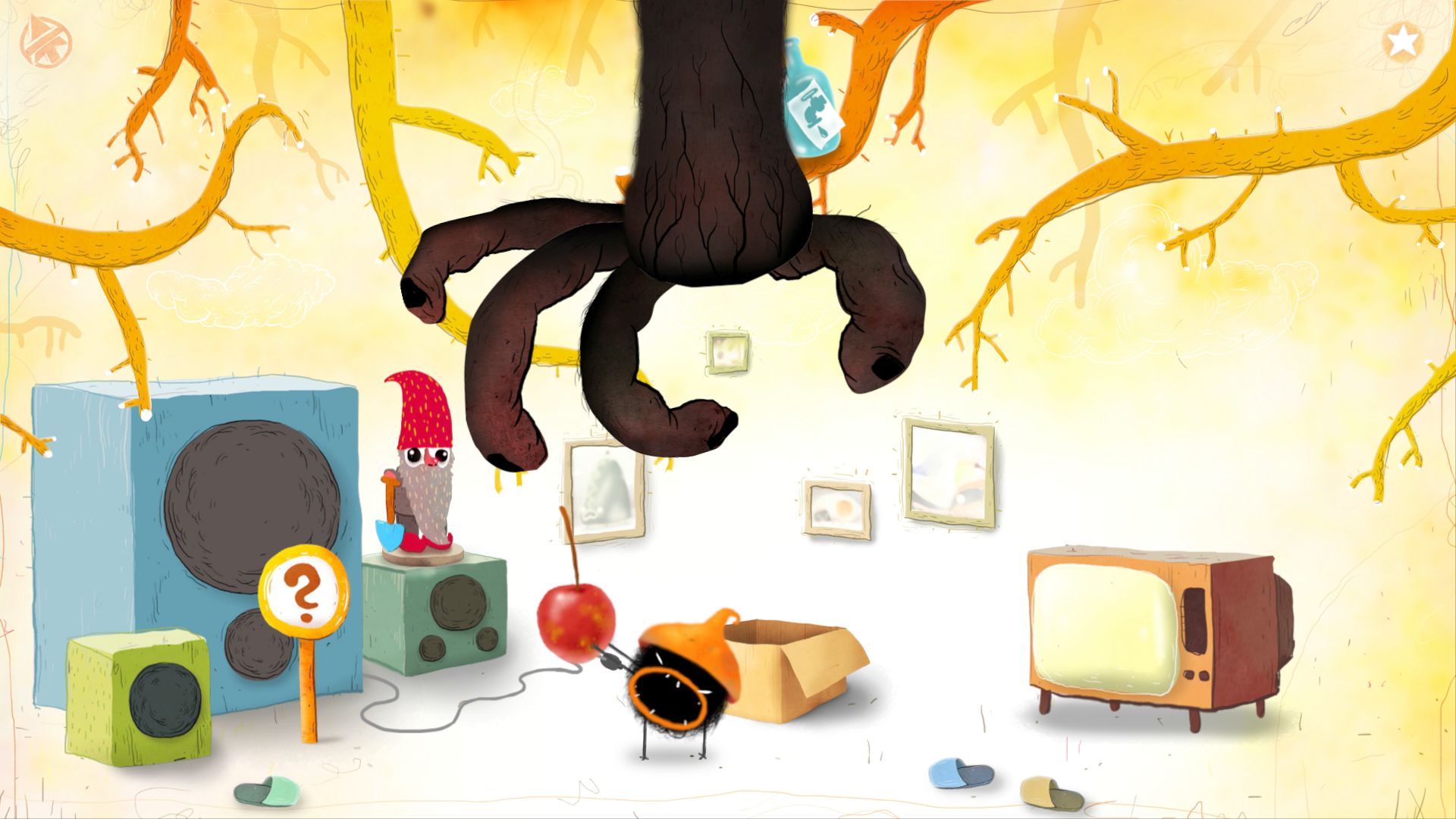 Chuchel is also the name of the main character; he’s a black orb of hair with limbs and a hat. He loves cherries. But the cherry he wants to eat is taken by a massive hand in the sky—it becomes the forbidden fruit. So he follows it, through unconnected screens that have a mixture of basic tasks. He’s not the only one hunting the cherry, as his rival, Kekel, wants it just as bad. Kekel is a mouse-like animal and some of the adventure is spent chasing him down and getting into scuffles.

There are 30 stages in the game and each is one of three different types: mini-games, adventure puzzles, and animated scenes. These are distributed in approximately equal parts and are connected by the hunt for the sacred cherry.

Most of the mini-games resemble famous video games, like Pacman and Space Invaders, but they aren’t usually direct copies. In Tetris, you have to avoid blocks and bombs that descend automatically. The Angry Birds adaptation involves bouncing Kekel off drums to knock over a structure. Flappy Bird gets a nod too and it works fine because of the lively music that is in sync with the action. These mini-games are usually short and sweet, but they are also shallow and randomly thrown into the mix without much overarching structure. 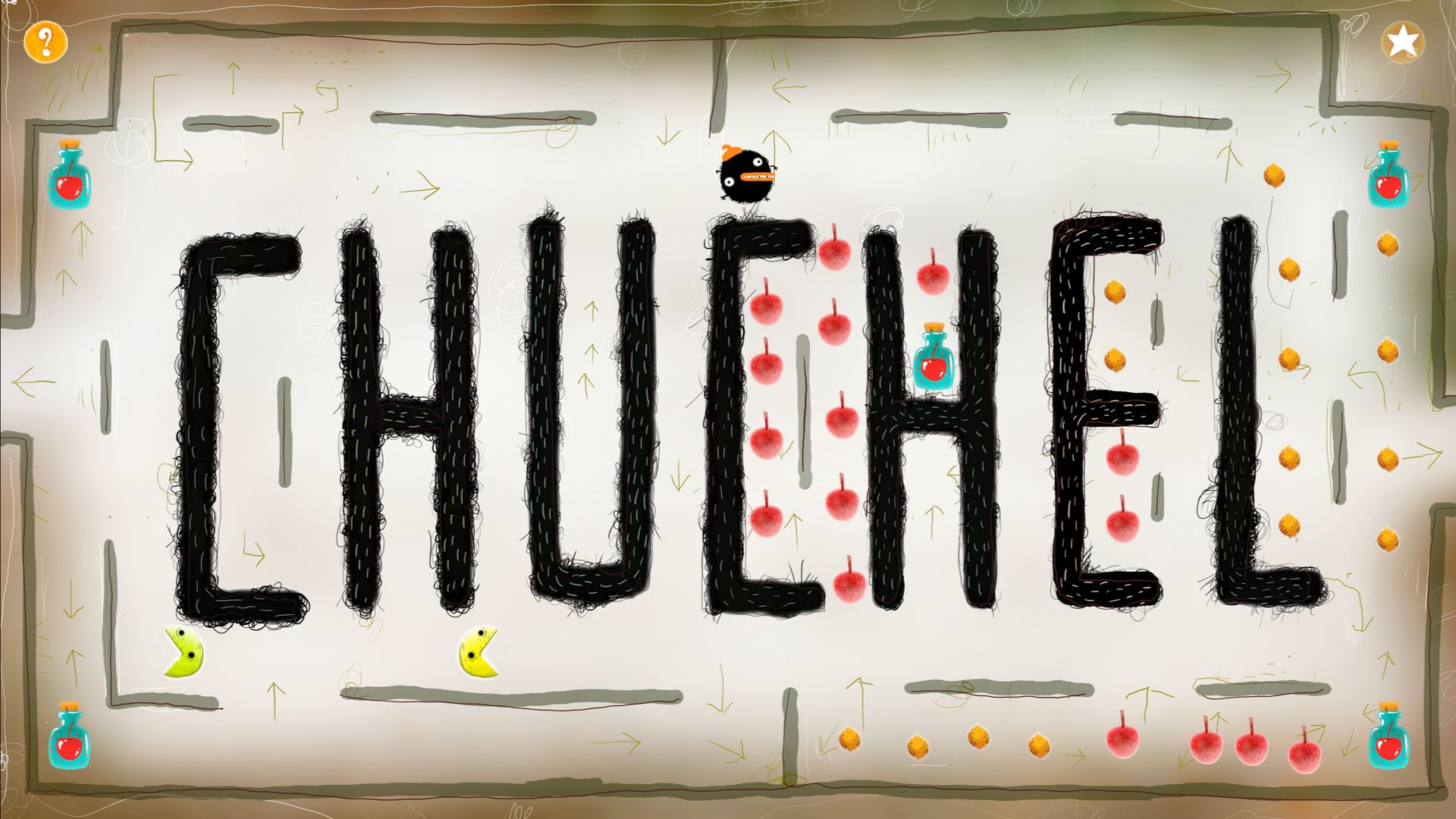 Adventure puzzles make up a good portion of the game, and their designs are similar to Botanicula or Machinarium, although without as much depth. The revered cherry might be on screen but it cannot be accessed directly. So you have to play around with objects or characters and watch hilarious scenes play out when things fail. In one puzzle you need to squeeze toothpaste to create a snake that will scare a toothbrush in order to climb down a pipe. There is a puzzle where you swap between three dimensions (by putting on hats) just to pluck the cherry from a cage. Hints can be used if you get stuck, but the challenges are never complex enough to need them. While there are a couple of decent puzzles with funny moments, solving them rarely is more involving than clicking things and seeing what shakes.

Animated scenes might require clicking to keep things in motion, but they are basically linear stages that require no skill. They tend to be peculiar scenarios of the two main characters tumbling after the cherry or being hassled by other creatures. They are best thought of as rewards for completing the preceding mini-games and puzzles, although the other two components have funny animated scenes to a lesser degree.

Humor and quirkiness is the game's most consistent strength. Even though the main character doesn’t speak, he is endearing because of his basic goal and reactions. Watching him be denied time and time again is a pleasure because he can be rather expressive. He'll lose arms (temporarily) trying to pull the cherry, and he'll charge headfirst into bigger targets and then scream in frustration after failure. There are many slapstick moments to enjoy, like when Chuchel is squashed flat or blown across the screen. You want him to succeed, but just not right away.

But the end comes quickly; the game takes around 150 minutes to complete. Due to the brevity, there is minimal repetition, so it remains fresh for most of that time. There isn’t great incentive to replay although there might be a few missed animations to see in a subsequent play through.

Like their previous games, Chuchel was built in Flash, so it will run on a toaster. The only technical issue came during one of the aiming mini-games when the mouse cursor remained hidden for a few minutes. The game loads quickly too, so you can get straight into the fun. 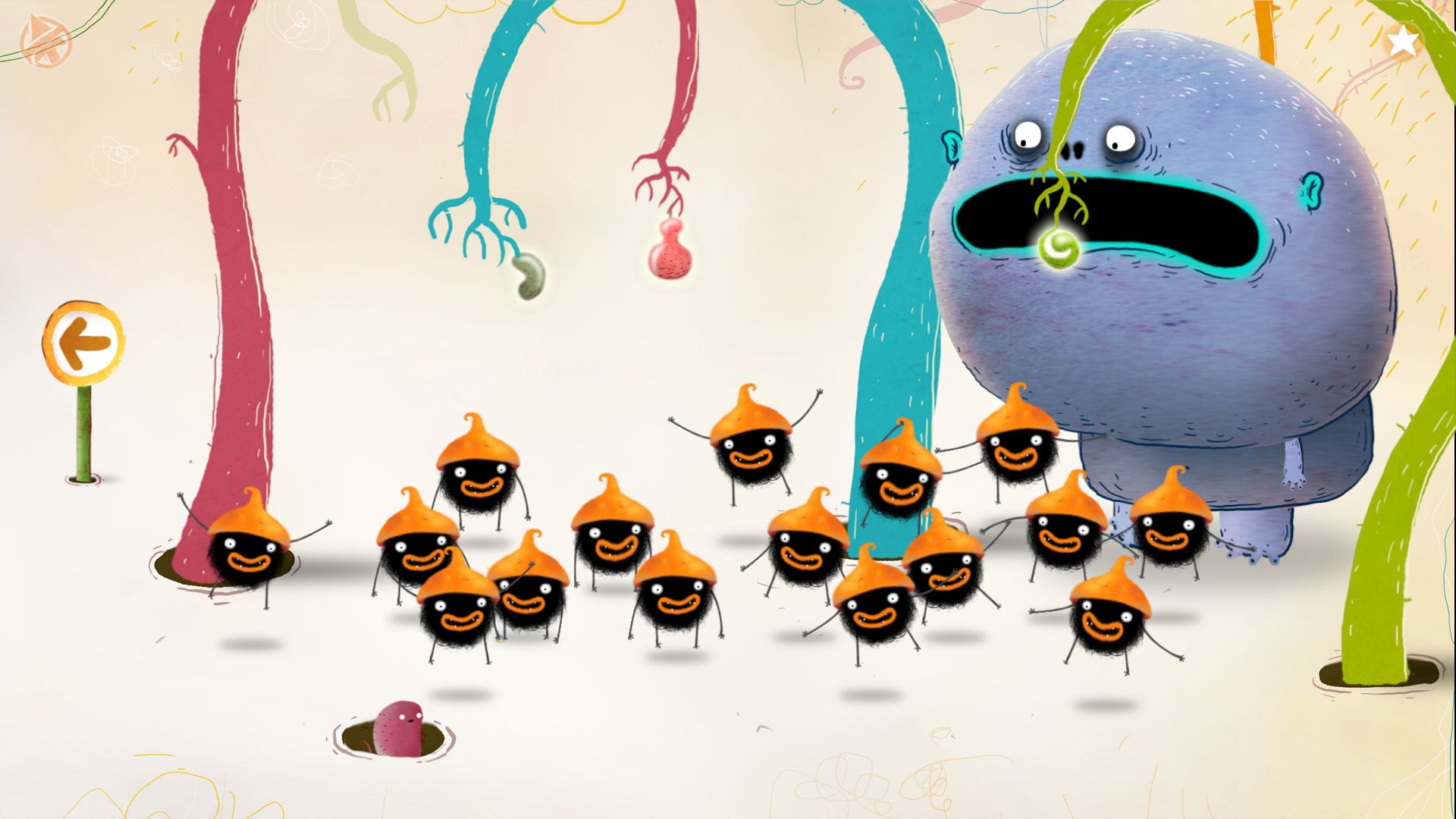 While everybody should have a figurative cherry in their lives, not everybody will need Chuchel. If you are looking for a brief and simple adventure that provides a few laughs, then it fits the bill without breaking the bank. The main character is rather likable thanks to his singular goal and energetic personality. He'll need to complete trivial mini-games and a handful of basic puzzles, but too much of the game is just clicking on strange things and watching the well animated scenes play out. Chuchel is a chase for a cherry with charm and comedy, but, much to my chagrin, it's not a contender for Amanita Design's best creations.

Our ratings for Chuchel on PC out of 100 (Ratings FAQ)
Presentation
76
Great animations of strange creatures with funny sounds and a decent soundtrack accompaniment.
Gameplay
62
Some of the puzzles are okay, but a bit too much of the game is just clicking things or completing trivial mini-games.
Single Player
64
Chasing down the cherry provides a simple goal that links the otherwise unconnected puzzle screens. Humor also helps to make the main characters likable.
Multiplayer
NR
None
Performance
(Show PC Specs)
CPU: Intel i5 3570k
GPU: XFX RX 480 GTR Black 8GB
RAM: 16GB DDR3
OS: Windows 10 Pro 64-bit

94
It's powered by Flash, so it should work on any PC built this century. It did have some minor cursor issues.
Overall
68
Chuchel’s overt humor and slick animations will make for an entertaining few hours but its simple puzzles and throwaway mini-games fail to ensnare deep imagination. 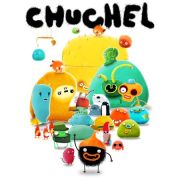