Not a complete reflection

If given the choice, do you want a happy ending or one where all the loose ends are tied up? Twin Mirror is the newest game from Dontnod Entertainment and it will ask you this question. It is a narrative adventure, like Life is Strange or Tell Me Why, where you talk with others, examine items, and explore areas. The main character has an unusual mind that plays a key role throughout. On one side of this mind is an imaginary friend that appears in conversations and on the other side is a calm inner world where players can explore the past and analyse the present. While the game demonstrates some interesting qualities in relation to these elements, its story is brief and unexciting, with choices that have too little impact on events. 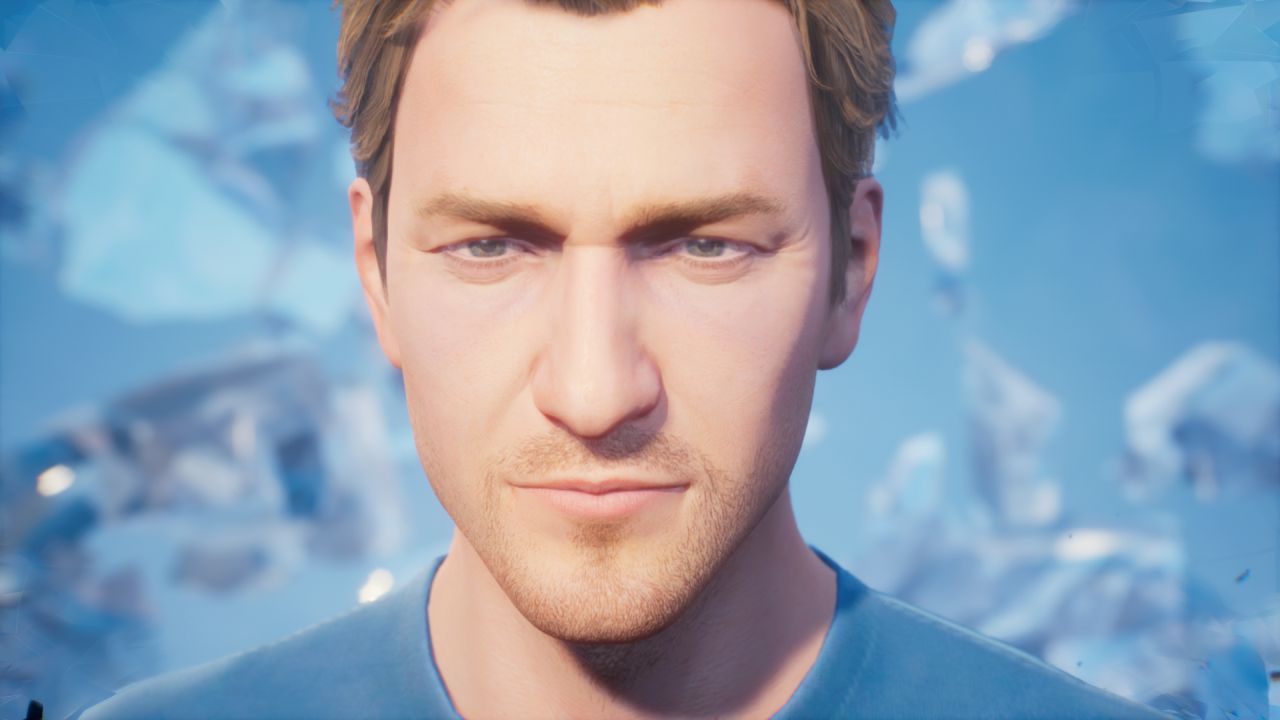 You play as an investigative reporter, Sam Higgs, who is returning to his hometown of Basswood to attend a funeral. The funeral is for his friend, Nick, who died in a car accident. Sam has not been back to Basswood in years because he wrote an article that got the local mine shut down, and many people lost work. Sam became a pariah among the community and he also split with his girlfriend, Anna, who refused his proposal. So he left town to escape the past. But now he’s back, exposing old wounds and creating new ones.

While attending the wake, Sam is asked by the daughter of his deceased friend to investigate the accident. She believes there is more to it and Sam is the closest thing to a private detective. No matter how you respond, Sam will inevitably need to assess whether foul play was involved. But before that, Sam mourns his dead friend by getting blackout drunk. He wakes up the next morning with blood all over his shirt and no memory of how it got there. Tracking down the source of this blood is just the start of the investigation, and the first place to check is the bar where the drinking began.

Inside the bar is evidence of a struggle and Sam can use a special Mind Palace world to find out who he fought. The Mind Palace serves two purposes across the game: providing exposition and analysing scenes. The exposition side is fairly basic; certain events or items will bring an isolated memory to the fore, which Sam can re-experience. But the Mind Palace is more interesting when it is used to analyse scenes like a detective. Sam locates all the clues in the bar—overturned tables, a broken clock, a moved jukebox, smashed bottles—and then he puts them together in the only order that fits. You cannot fail, as the incorrect sequence will just lead to Sam commenting about how it must have happened another way. Analysing scenes works well but the disappointment here is that the Mind Palace is only used a few times like this across the whole game. Once Sam works out who he clashed with at the bar, he’ll need to talk to others to locate the person in question. 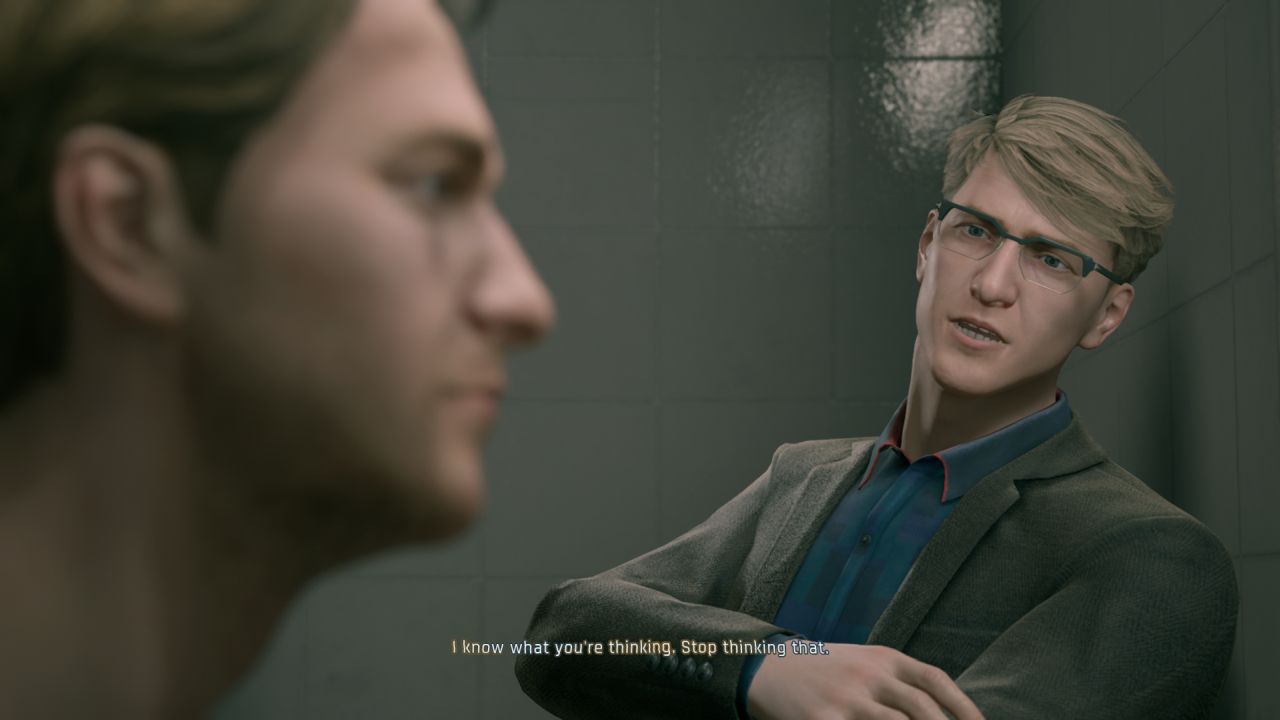 To help navigate social interactions, Sam has an imaginary twin (aka The Double) that provides insight. At first this twin appears to be contrarian and part of your mind that is not worth listening to. He acts smug, seems too sure of himself, and can interrupt. The Double eventually shows clear intention of helping Sam navigate the muddy waters of human interaction. Typically this imaginary friend gives observations about people, maybe with suggestions about what Sam should do or say that will help him stay on that person’s good side. It is pleasing that these observations are not always obvious, and sometimes they’re a nice reminder of what you might have seen during those Mind Palace trips. There is no penalty for asking The Double what to say, when it is part of the dialogue choice, and given he can be dryly sarcastic, it is usually worth it. Although given his snobby attitude, some players might find this imaginary twin too annoying to be useful.

With these two unusual interactions within his own mind, it is not surprising that Sam’s sanity sometimes shatters suddenly. During distressing moments, Sam can spiral out of control and fall into the darkness of his own thoughts. He, and you, will get lost in a dark version of the Mind Palace, and he might need help from his twin to escape. These sequences are diverse, and might involve escaping a maze, running from a threat, or following your twin around a blank world. Since each one is different, they offer some refreshing interludes although none are particularly substantial or difficult. Once he recovers, it is often the time to make a tough choice.

At key points in the story, Sam can choose to listen to his imaginary twin or trust his own instincts, but the repercussions from these ‘big’ choices a limited. Some dialogue changes here and there. People might react with a different tone. But much of the conversation still goes in the same direction and the main story trundles on without much change. For example, if you do not trust your ex-girlfriend Anna with information, then she does not accompany you to the scene of Nick’s car accident. But if you do trust her, she comes along but just sits in the car. And this is actually one of the bigger consequences from choices, aside from the two different endings. 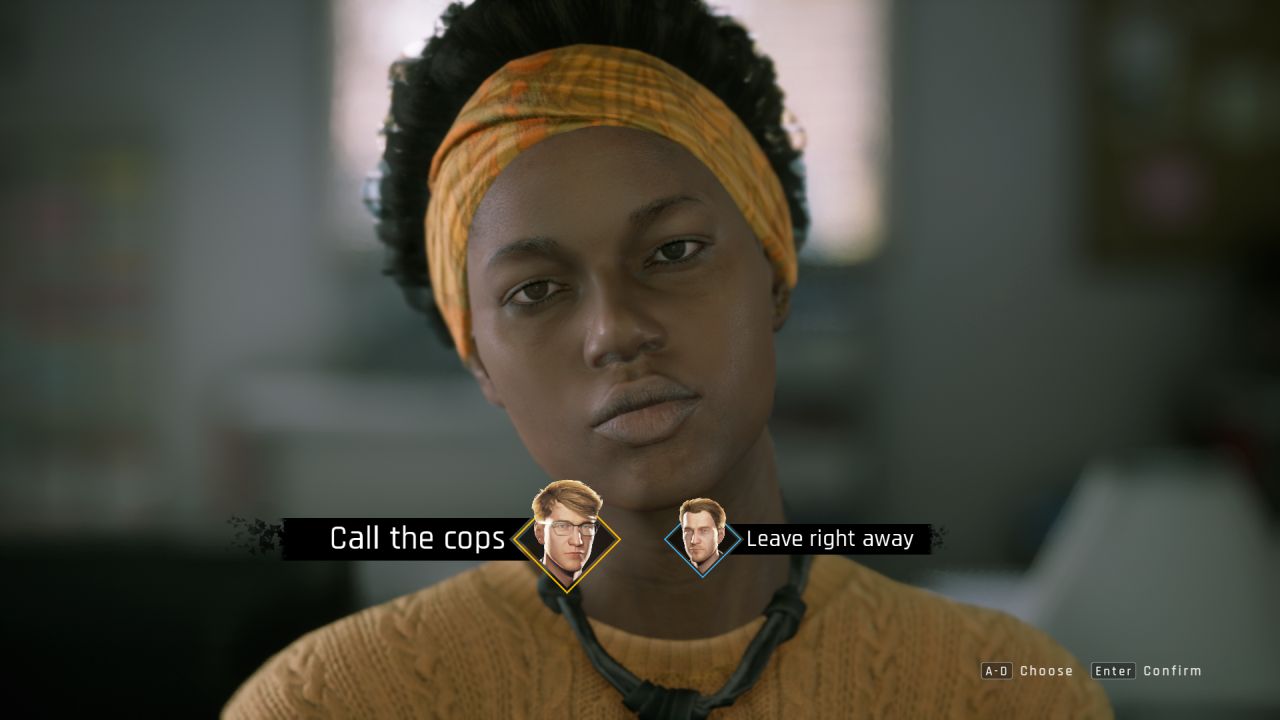 While the climax plays out the same, it is either handled with action (Mind Palace) or discourse (twin). Both methods lead to the same two endings, but the content within them changes based on the mind technique chosen. If you pick your imaginary twin, then there are smoother social interactions in the denouement, but the story is left without a full resolution. If you go with the Mind Palace, then all answers are revealed but at the cost of a less happy ending. This dichotomy reinforces stereotypes; truth-seekers are cold-hearted social klutzes and smooth-talkers miss facts that are smacking them in the face. While it is just a fictional representation of personality extremes, it results in unsatisfying endings at both ends of the scale.

You don’t necessarily need a brilliant ending for a good story, but Twin Mirror also falters in that regard. The story is short and bland. The entire thing will take less time to complete than two episodes from Life is Strange, and the content within is barely enough for a weekly episode of a police drama. It is slow going and none of the side characters are interesting or even given much screen time. Anna has the biggest role outside the main character, although her breakup with Sam becomes a ball and chain that the narrative never moves beyond. The five hour story tries to stay grounded, but the resulting adventure lacks spark. You can go back and play the game with different choices, but there will be little you have not already seen.

Twin Mirror is an alright looking game that has a few detailed areas to explore. The indoor zones usually look better than the outdoor ones, although the main street of Basswood is the highlight in terms of exploration and size. No area has a heap of interaction and the puzzles are minimal. Inspecting items is clumsy, as you need to be aiming at the right angle and standing the correct distance away. The game adopts a mostly realistic visual style and it looks best during night scenes. Most character models are fine, although some are like caricatures with oversaturated cartoon textures. The voice work is satisfactory, with Sam’s voice actor, Graham Hamilton, doing a good job at subtly distinguishing between the real Sam and his imaginary twin. There are a few issues with lip syncing though, either because characters don’t open their mouths or the timing is off. The Mind Palace world offers the best of the visual rewards, with fractured landscapes and abstract worlds, as the town of Basswood never provides impressive vistas. 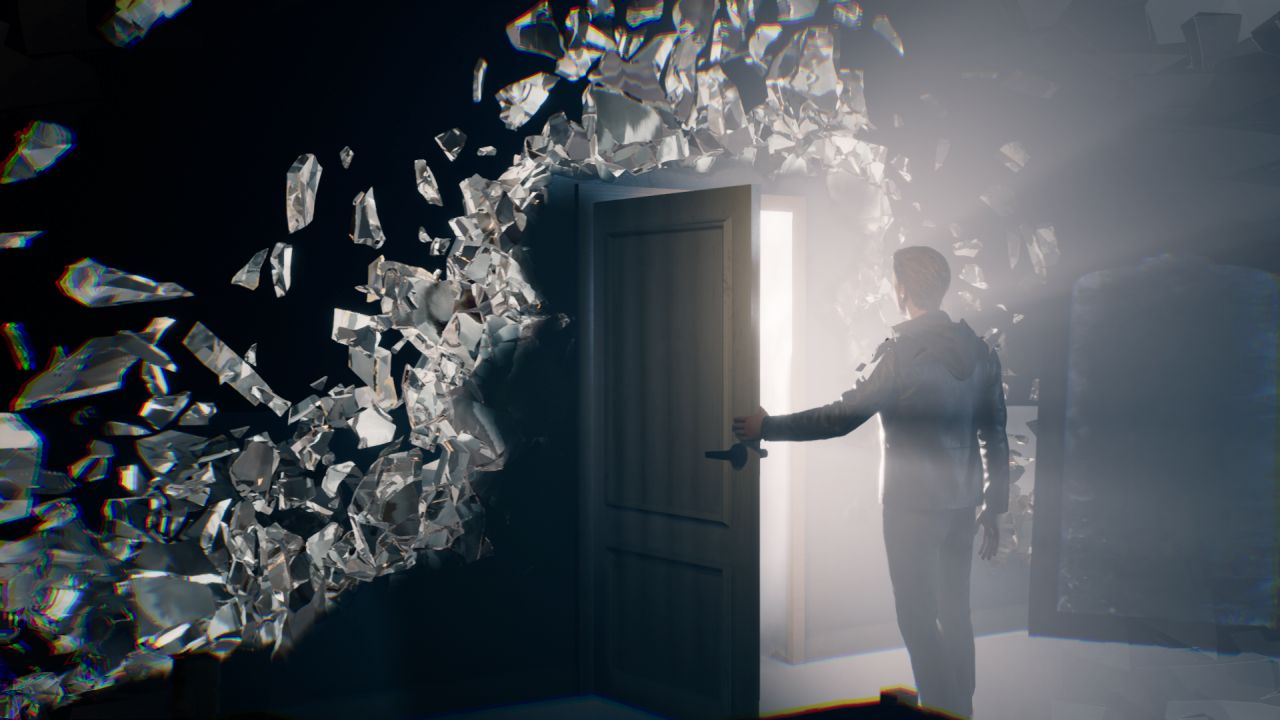 Twin Mirror is not a reflection of Dontnod’s skill in the narrative adventure genre. Although it has some neat elements when it comes to the trippy Mind Palace and the helpful imaginary twin, they are either not used enough or do not make a huge difference on the outcome. The story is short and boring, opting to stay grounded at the cost of excitement. Aside from the main character, and his ex-girlfriend, the cast is forgettable. It is easy to imagine Twin Mirror with a longer narrative, full of twists and turns. You can even picture where there could have been more interactions with the Mind Palace or the imaginary twin, both offering more player choice. But in the end, we do not always get what we want.

Our ratings for Twin Mirror on PC out of 100 (Ratings FAQ)
Presentation
70
Satisfactory visual design that does its best work during night scenes and when it takes trips through Sam’s abstract Mind Palace world. The voice work is decent, with Sam’s actor earning most of the praise.
Gameplay
50
A few puzzles and a bit of simple interaction, but nothing extraordinary for an adventure game of this type. Some large areas are decent to explore the first time around and the Mind Palace has a few neat diversions.
Single Player
55
While it starts with an intriguing premise, the story never goes anywhere interesting. It could have been wrapped up in an hour if not for all the padding.
Multiplayer
NR
None
Performance
(Show PC Specs)
CPU: AMD Ryzen 5 3600
GPU: XFX RX 480 GTR Black 8GB
RAM: 16GB DDR4
OS: Windows 10 Pro 64-bit

70
Performs well enough although load times are excessive between some locations (e.g. coffee shop and street). There is often clumsy interaction with items of interest.
Overall
61
Twin Mirror is a teaser for an exciting adventure that it never delivers. There are some good ideas here, like the interesting Mind Palace world and a helpful imaginary twin, but they needed to be expanded. Ultimately it has a short and bland story, with minimal interaction, limited player choice, and a lack of memorable characters. 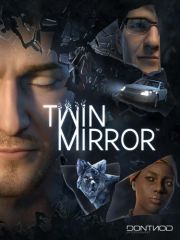 All videos for Twin Mirror (6)
Advertisement ▼