TELL ME WHY
Platform: PC
69
SummaryNewsArticlesVideoScreens

Tell Me Why Review

Flawed memories and a voice that is too quiet

Human memory is imperfect and malleable. What we remember of an event from weeks ago could be partially incorrect. The chance of error increases with stress, misinformation, and time. And yet we are products of our memories. How much of who we are today is based on something that never actually happened? DONTNOD Entertainment are no strangers to games about memories. Their first game, Remember Me, involved manipulating the brain to achieve a goal. Tell Me Why is different. It’s a graphic adventure that strives to remain grounded as it tackles the traumatic history of twins. In a similar style to Life is Strange, and over three lengthy chapters, the twins explore their dark past in a small town to find out what really happened and why. 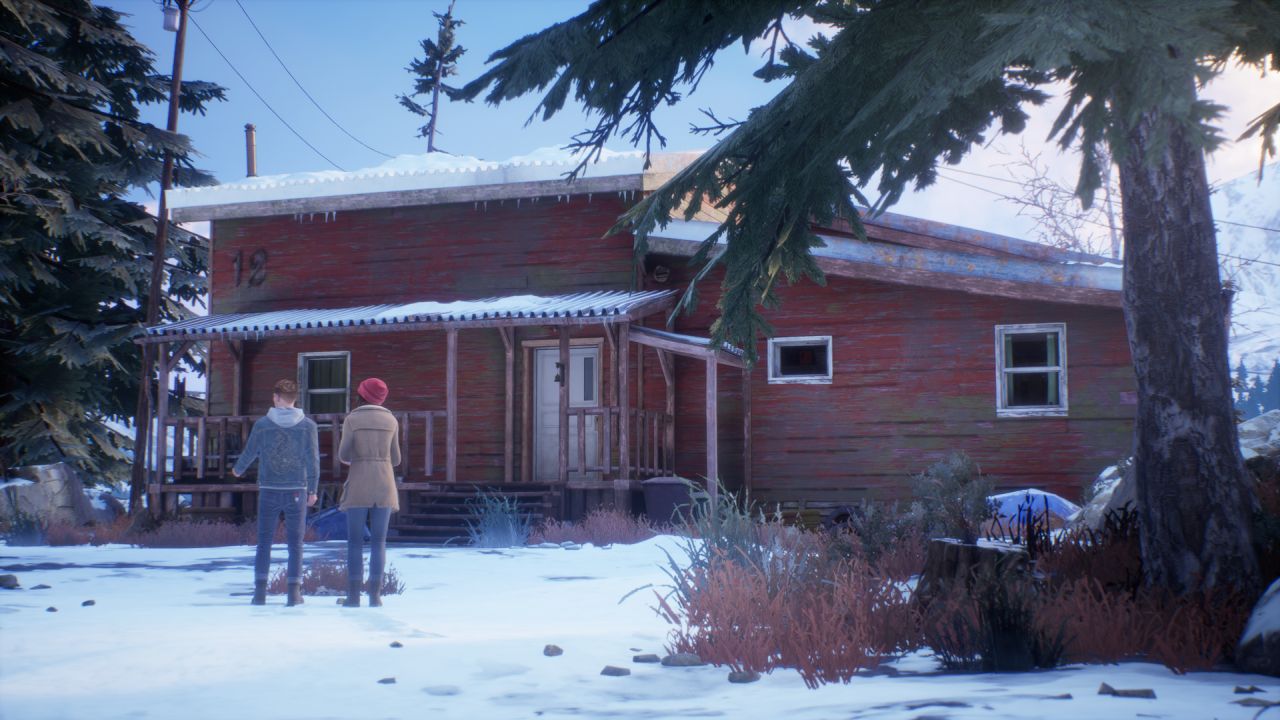 Back in 2005, the twins, Alyson and Tyler, were involved in a tragedy that led to the death of their mother. Tyler was sent to a juvenile facility and Alyson moved in with her uncle. Ten years after the events, Tyler is returning to the small Alaskan town of Delos Crossing to help Alyson clear their personal effects from the family home so it can be sold. Now in their early 20s, what they remember from the fateful night is still fuzzy and raw. But when they discover something in their mother's room that challenges preconceptions, they have to search for clarity. That means exposing old wounds, with the help of other members of the rural town that have not forgotten that day either.

Since there is only a small cast of characters, Alyson and Tyler’s interactions form the brunt of the narrative. Players control both twins, in leapfrog fashion, as they move through locations, examine items, and talk to others. Fortunately the twins have well-rounded personalities, with voice actors that are up to the task emotionally.

Although born a girl, Tyler made his transition into a man during his stay at the juvenile facility; he actually wanted to be a boy before the tragic event, at quite a young age. Coming back to a small town after such a change produces different reactions, although most are tame. His identity is a part of the story but it doesn’t dominate proceedings. Alyson has been in a holding pattern, and she desperately wants to escape to a major city and leave her awful past behind. The twins are on good speaking terms, because they were inseparable as children, but Tyler cannot move on until that horrible chapter has been closed. 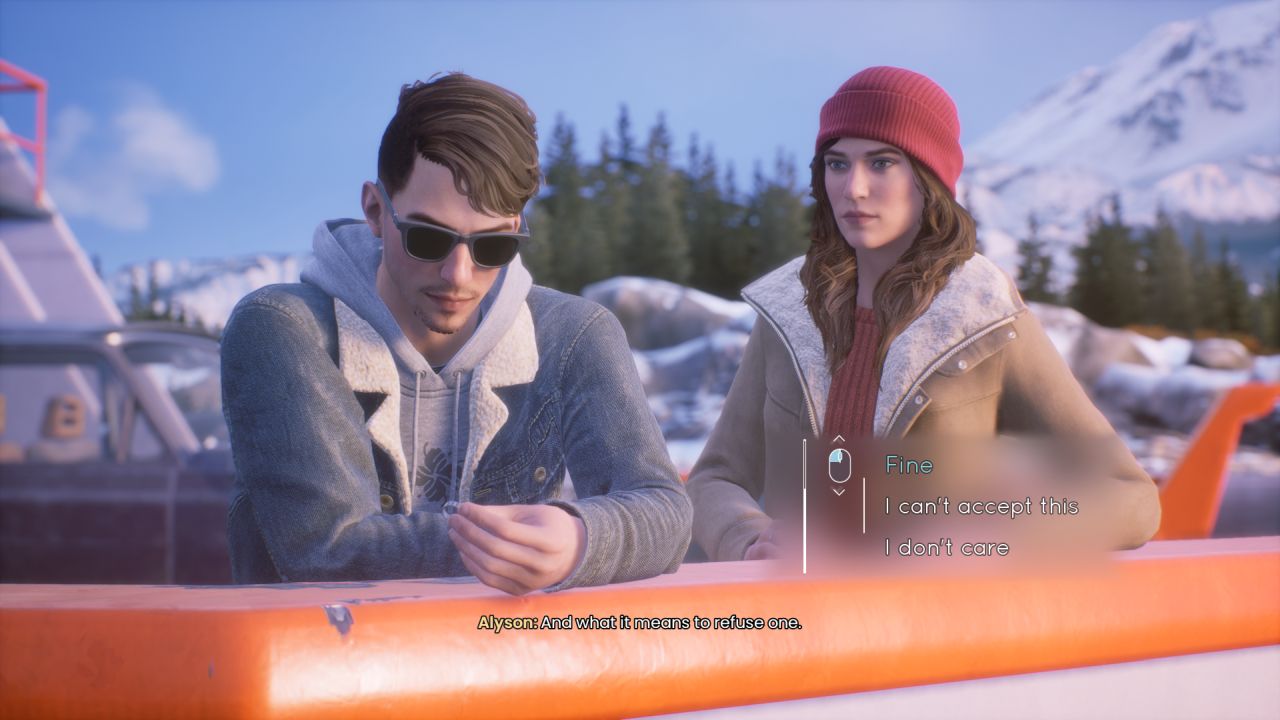 The twins have a special relationship that gives them telepathic abilities. They can talk to each other without speaking, and this ‘Voice’ is introduced awesomely as Tyler navigates under the floor of their old house to gain entry. The Voice is also used during some conversations, as they can ask each other questions silently or move the conversation along. As neat as this telepathic device first appears, the twin’s Voice is underutilized and does not achieve much more than what could be done with a phone call or a whisper.

This telepathic ability extends to memories they can view together. If one twin recalls an event, they both see it in the world at the same time. These three-dimensional memories are handy when so much of the narrative involves the past. But as mentioned, it has been ten years since they were playing ‘goblins’ together and memory is a funny thing. The twins sometimes remember differently: characters might be either angry or despondent, helpful or accusatory. The player’s job is to pick one memory—not easy when both seem plausible—which can alter what conclusions they draw about the past.

As you make choices, the bond between the twins will either grow or weaken. If you select Tyler’s memory while playing as Alyson, the bond strengthens. Even just being willing to accept fault or trying to repair bridges helps foster their relationship. Any positive or negative change to this bond is shown by a small icon on the screen. With a generally high bond, there is more pleasant conversation. But when it gets low, out come the disagreements and hostilities. If players want to keep things amicable, they should pick the other twin’s memory, regardless of whether they think it is true. Even in non-memory situations, backing up the other sibling tends to rule out diplomacy. This bond could be classified as trust and loyalty, or it could be seen as blind faith just to keep the peace. 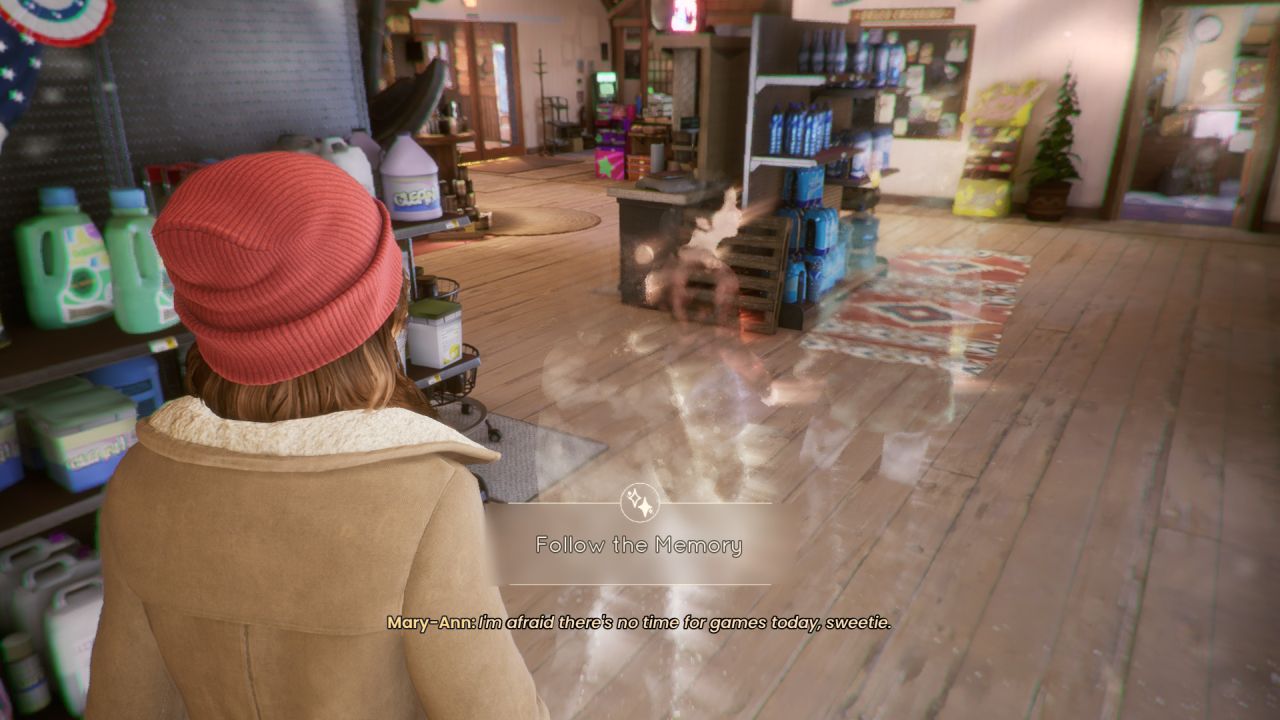 Whatever memory you choose, and however strong the bond is, nothing much changes in the narrative. All main story events occur in the same way and most dialogue remains identical. Minor things alter throughout, like if you antagonize a side character, they will not accept Tyler for who he is at a later meeting. Alyson can optionally make a present for a friend, changing a few lines of dialogue and some animations. But since there are no significant consequences, the only reason to replay the game would be to see different banter between the twins, which is not worth the effort after getting to the end.

The conclusion is rather unsatisfying no matter how you play. Just before making a decision with the final memory, the twins get to explore an area that explains conveniently, with dates and pictures and letters, some mysteries. These could have been delivered earlier so the final reveal would not be so cramped and unrealistic. Another sticking point is how neither of the final memories felt correct, even after two different playthroughs. But this could be to encourage discussion or expose the frailty of memory; as the events are so traumatic, maybe neither twin remembered what happened? And like real-life victims of such irrational trauma, they may never know why.

While the twins are fairly good characters, the rest of the tiny cast is mostly unlikable and uninteresting. Down the bottom of the list is a married couple that runs the local store, and their stock-boy who can optionally romance Tyler after they hurl toys at each other. The chief of police, Eddy, is also the twins’ uncle and he proves to be mostly fully-formed. Sam, the local handyman who has kept up repairs on the family home, is perhaps the only one that could be called endearing, if you ignore his alcohol problem.

Like the small cast, there are not many locations to explore across the three chapters. The house and immediate surrounds are vital and revisited many times. In and around Delos Crossing is the local store, the police station, a cemetery, the ferry, a forest path, a boat workshop, and Alyson’s uncle’s home. But some of these locations are only used briefly, bizarrely, so you spend a lot of time at the family home, shuffling between items of interest and examining them with slow and clunky animations. It will take around nine hours to get through all three chapters, if you are thorough. 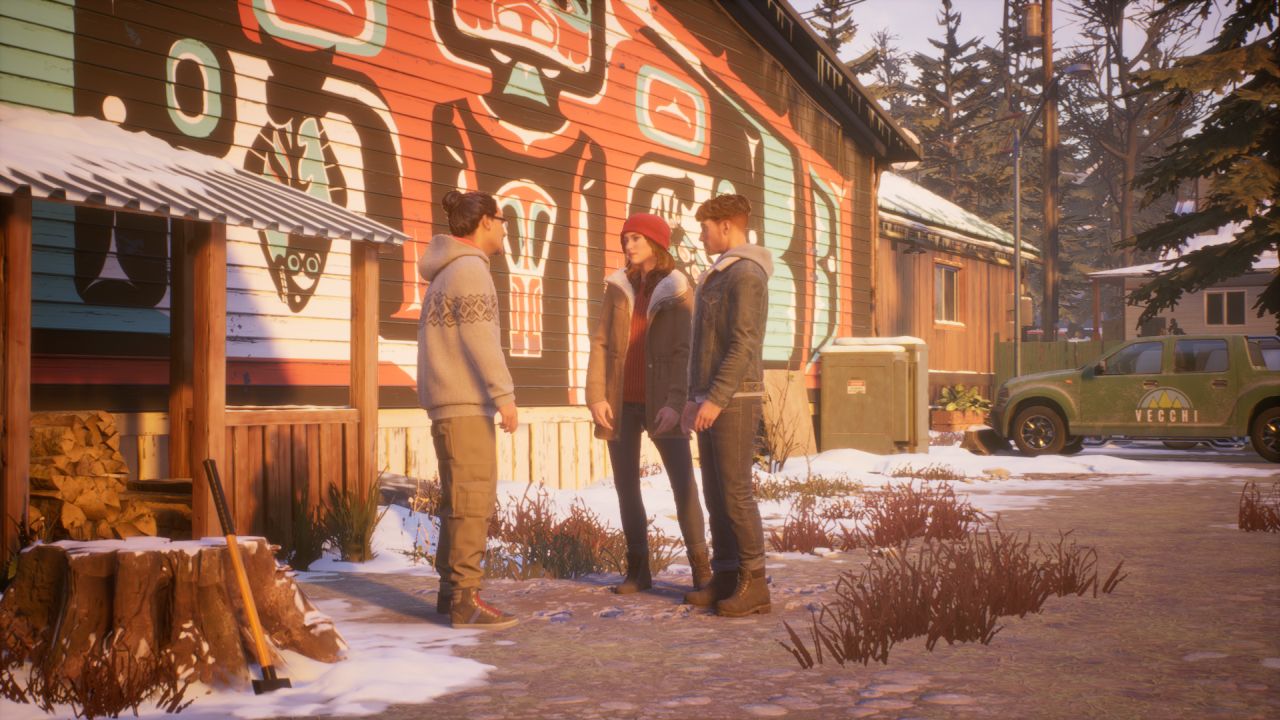 And you won’t find much gameplay in the traditional sense. There are a couple of basic interactions: fixing a fuse box, buying products, a fishing mini-game, and breathing exercises. The twins’ fairytale book is used to solve a few puzzles—it was written by the kids when they were young, with help from their mother, and contains stories about animals that leads to combination codes and more. One interesting gameplay segment in the police station involved illegally rummaging through files; but despite the buildup, it didn’t amount to anything exciting. And really, most of the game struggles to be interesting, even with so many secrets to uncover.

The upside of having so few locations is the increased level of detail. This is evident mostly in the main house, where there are carvings on furniture, stains in the carpet, graffiti on the wallpaper, and a paper plane stuck above the light fittings. Lots of care has been given to each area. There are other subtle details too, like wetness around characters’ eyes during emotional exchanges. The grand vistas of Alaska are brilliant, although they are rarely put on display. Music is not a big feature of Tell Me Why, as it mostly recycles a synthesized tune for a sinister atmosphere.

Before you dive into Alyson and Tyler’s journey, it is important to understand that this is not a happy tale. Aside from brief levity and a few fun puns, it is a miserable tale of woe. No more is this obvious than the mental health advisory notice that pops up just after the game finishes. But this is a game about deep scars and it might be impossible to convey any other way. The fact that it is so morose could be an indication that it hit the target and is true-to-life. 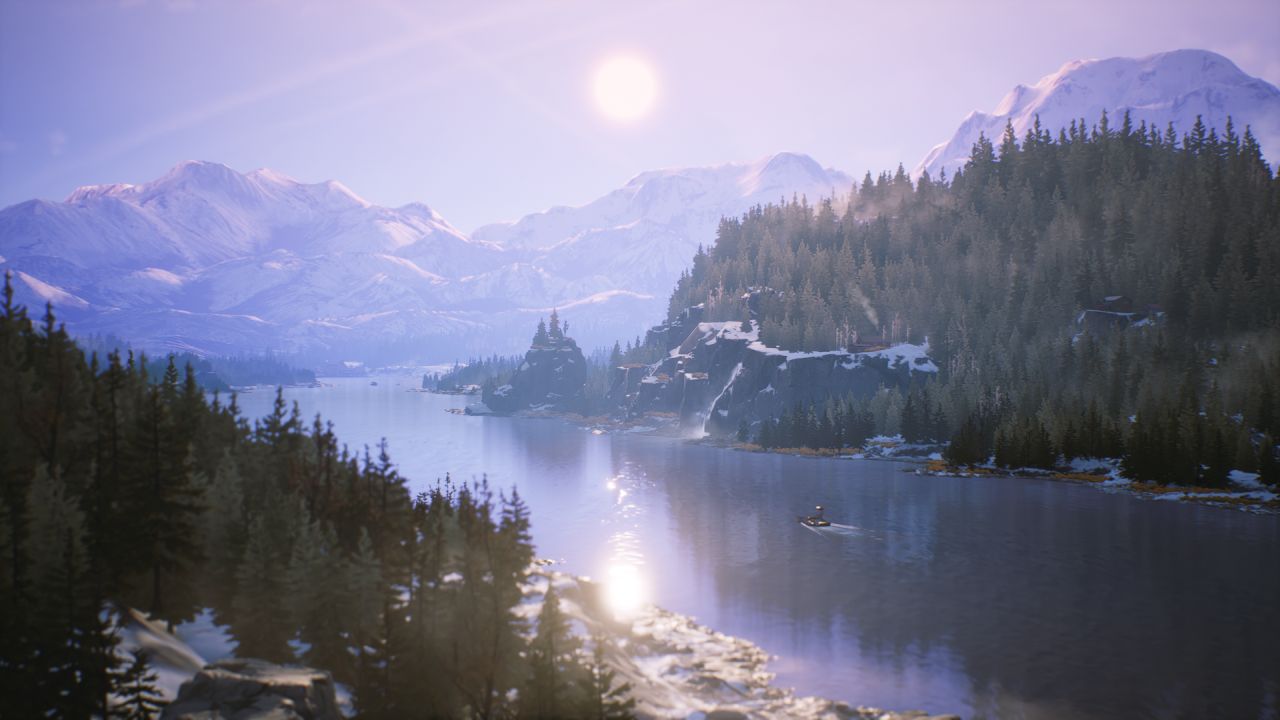 Despite being fairly sad, Tell Me Why is not that bad. It effectively delves into a traumatic event with twins who are complex characters in their own right. They revisit divergent memories and use telepathy to forge a bond that either strengthens or weakens. It is a pity that their Voice is not used well and that the ending struggles to connect. While the detail in the environments is usually good, the lack of different places and minimal gameplay makes it all quite boring and slow. And when player choice has little impact, Tell Me Why is not worth replaying until you forget everything.

Our ratings for Tell Me Why on PC out of 100 (Ratings FAQ)
Presentation
80
The Alaskan vistas are awesome and the detail in the main locations is excellent. Voice work for the twins is quite good, especially from Alyson, but music is obscure and animations are still a bit stiff.
Gameplay
55
It has minor and infrequent puzzles, some of which make decent use of a fairytale book. A couple of other mini-games are strange inclusions and mostly it’s just talking and browsing knick-knacks. Player choice has minimal impact.
Single Player
70
Although the story can be gloomy, there is a grounded quality that feels different from most other games. It is held together by the twins and their complicated past. Side characters are not that interesting and the end is both unsatisfying and unrealistic.
Multiplayer
NR
N/A
Performance
(Show PC Specs)
CPU: AMD Ryzen 5 3600
GPU: XFX RX 480 GTR Black 8GB
RAM: 16GB DDR4
OS: Windows 10 Pro 64-bit

80
No performance issues although some animations had glitches with objects being held wrong. Interacting with some objects can be finicky and painfully slow.
Overall
69
Tell Me Why tackles a difficult subject quite well thanks to interesting central characters who interact maturely and drive the story forward. But limited use of telepathy, immaterial player choice, and a generally boring delivery tarnish this morose tale. 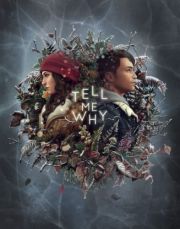 All videos for Tell Me Why (2)
Advertisement ▼