Alright, it is time for a serious discussion. Shooters have not advanced much over the last few decades. New indie games are still trying to recapture the magic of the 90s shooters. Big-name sequels are reproducing fleeting moments of success with an all-American hero (remember, no Russian). And looter-shooters ask players to kill the same enemy over and over so they can regurgitate the same weapon with slightly better stats. Serious Sam 4 does not tiptoe around the fact that shooters have not changed—it embraces it. It is an old-school shooter, with oodles of enemies and big guns. You run around and shoot until there is nothing left. And this would be more than enough, if it weren’t for some presentation issues. 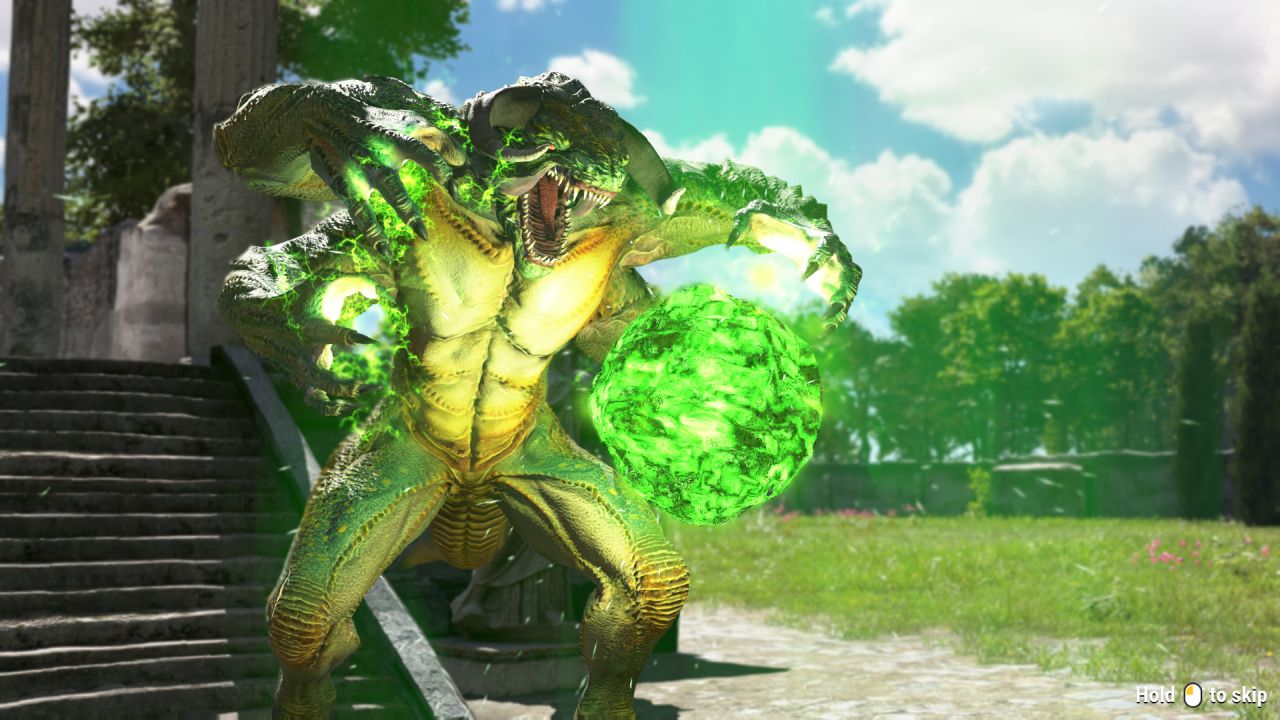 Serious Sam 4 is actually a prequel to Serious Sam 3: BFE, which is odd because that too was a prequel. But it does not matter what happened before, or after. In Sam 4, aliens have invaded Earth and things are looking grim for the human race with small pockets of resistance fighting back. To gain the upper hand, Sam Stone and his military squad are looking for the Holy Grail and their first port of call is Rome. But it’s swarming with alien nasties and so Sam has to blow Mount Vesuvius to clear the skies. After that, clues inside the Vatican lead them to a French castle and the location of the Grail itself. The story is ultimately an excuse to string places together, with Sam’s whole team trying to come up with the best one-liner along the way. Although the number of puns is more than all 90s action movies combined, and sometimes mildly amusing, the constant barrage feels more like squeezing blood from a stone, just like the story itself.

Squeezing your trigger finger is the name of the game and thankfully this pre-prequel packs a punch in the arsenal department. Returning classics are here for Sam to lay waste to enemies, including the rocket launcher, assault rifle, numerous shotguns, laser gun, and the classic cannonball launcher. The weapons reward accuracy and leading targets. Most of them get used all the way to the end, partly because ammo is depleted fast, but there is no denying that the Devastator rifle’s high damage and fast projectile speed means it usually takes preference. Well, unless you do a side mission to get the rocket-powered chainsaw launcher that seeks targets, grinds them to mush, and zips to the next one. The array of weapons at Sam’s disposal is great, and there is much fun had shooting anything that looks a bit weird.

Thankfully it’s not just weapons and better aim that will get you through the fourteen-hour campaign. Sam can unlock some basic skills to improve his effectiveness. As he moves through the story, special crates will give him a skill point to assign. One ability lets you melee-kill bigger enemies and another lets you ride atop some of them. Decreasing reload speed and reducing splash damage are nice to have as well. But one skill is the most rewarding: dual-wielding. Being able to spin up two mini-guns is awesome. Even having two shotguns, and starting them off in tandem, means you’ll be firing at double speed. There are some trade-offs, like losing secondary fire modes and accuracy, but it’s nice to have the option to ramp up the damage when things get heated. 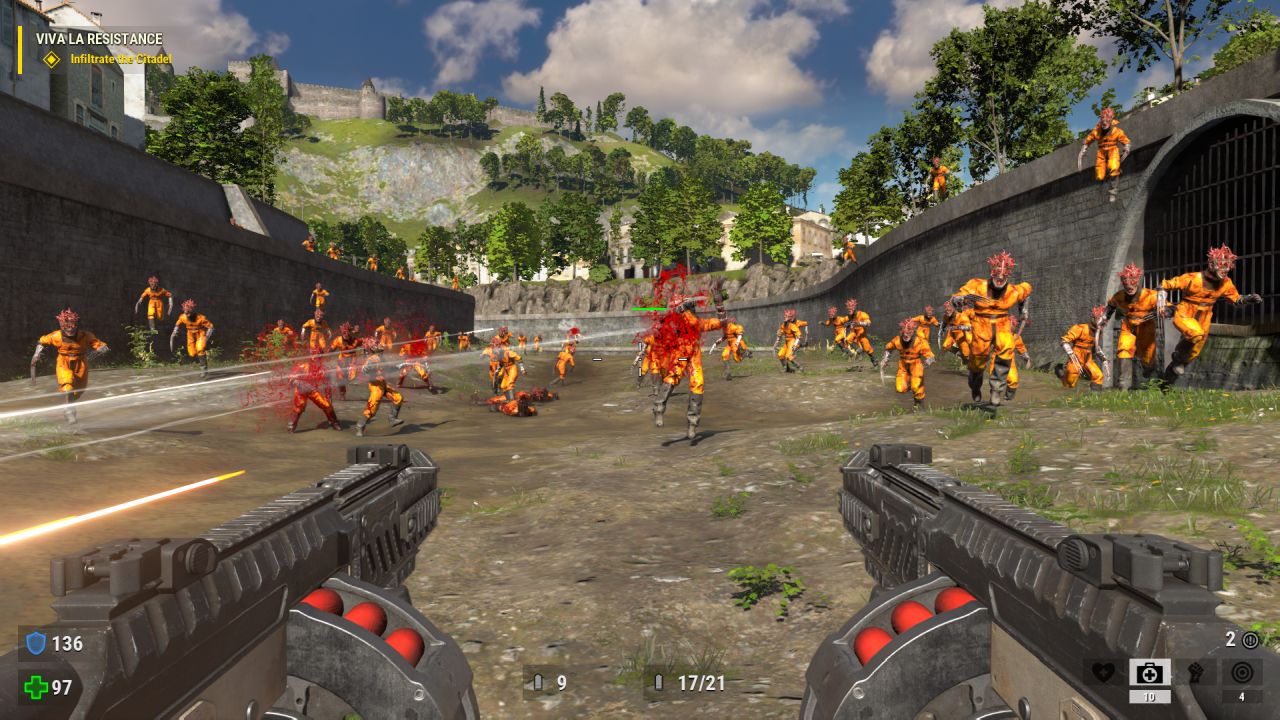 And the action gets hottest in big open spaces. If you come across an enormous courtyard, with health and ammo centralized, then enemies will spawn thick and fast. Usually they come in multiple waves, with only a short time in between to scoot around and grab supplies that are obnoxiously placed in corners. The open areas are liable to make gamers agoraphobic, but the act of shooting is too fun to make anybody anxious for long. Sure there are some linear city streets, but the game only rarely traps players from behind. One of the greatest freedoms is being able to run backwards, maybe all the way back to the start of the level. So that horde chasing you down can be funneled into a chokepoint. Just being able to move away from the initial encounter point is the ‘oldest’ part of this old-school shooter.

New shooters have side missions and so does Serious Sam 4. The side missions are detours off the main linear path and might come about after being radioed by your team or after meeting a character in the world. Despite how they sound, these detours should not be missed. They offer a heap of combat in large zones. Outside the extra shooting, the rewards are excellent. There are weapon upgrades, like a grenade launcher on the shotgun. Some bonus missions will give you a key that opens supply caches. But the best rewards are gadgets that provide a decent compliment to all the shooting.

Gadgets are single-use devices that can help Sam in a pinch. There are some boring ones, like a health injection and the ability to revive after dying. The more outlandish the gadget, the better. The black hole does exactly what you think, sucking up enemies from far and wide. A mini-nuke will smash hot air across the field like it smashes your framerate. And if you’re really struggling to actually shoot anything, a time warp will create a massive bubble to slow all enemies down for a moment. These gadgets are good enough to negate an entire wave. If you do all side quests, and find the odd secret, you’ll have enough of them to deploy when the action gets a bit too heavy. 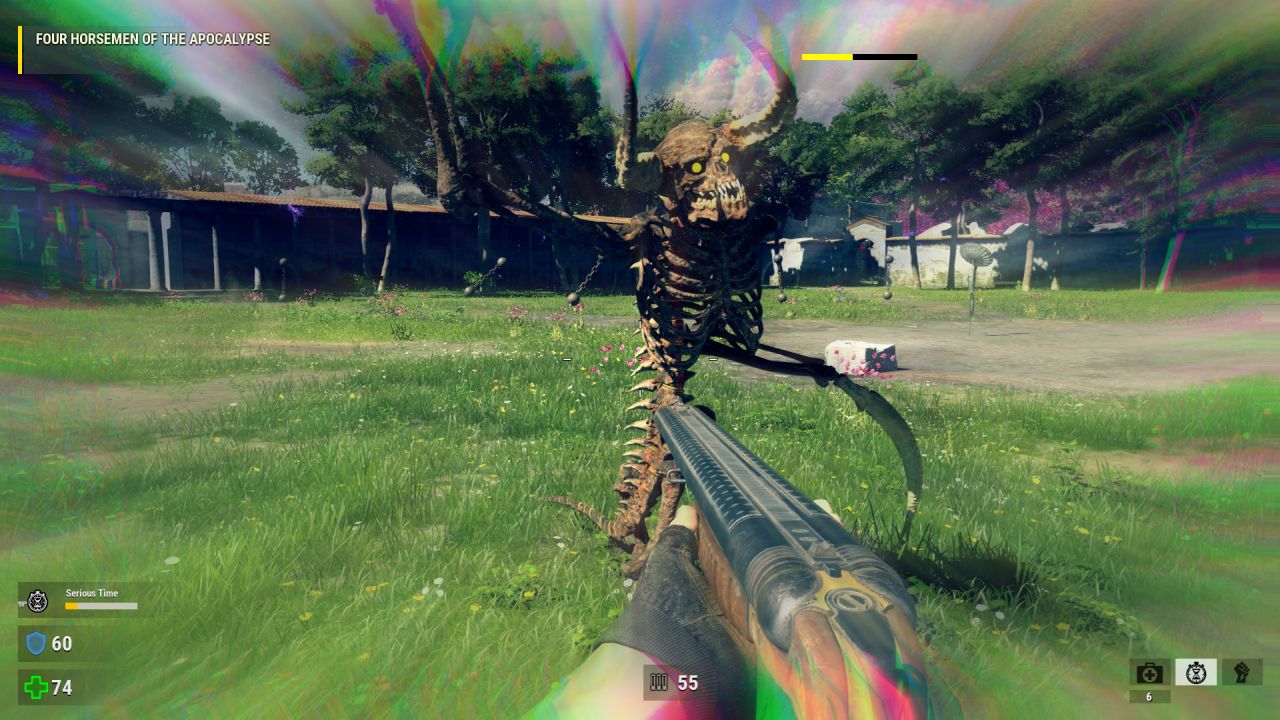 Just like a rolling stone gathers no moss, Sam is in constant motion when threats are around. You are either running backwards or strafing sideways, or both. And the variety of enemy forces is good, from the classic screaming kamikaze suicide bomber to a giant lizard that hurls green orbs at you. Many old foes return, like the Kleer Skeleton, and most of them are unchanged in terms of attack styles, but that does not make them less fun to kill. The status quo changes during a few Mech sequences, where you become a giant killing machine along fairly linear paths. These are fun at first but are nothing special. Overall the general gameplay is solid, although predictable.

Less successful is the overall presentation. Serious Sam 4 is not a good looking game. The human character models are dreadful; most women look like their eyelids were surgically removed and they are still surprised about it. Animations are sloppy, with jitters and poor lip syncing in cutscenes. The world design is generic. Sam goes through endless nondescript ruins that are straight out of The Talos Principle. Then there are bland warehouses and samey city streets. And within each featureless level are presentation glitches, like side areas not being properly lit, textures off-kilter, objects floating in the air, and awful water reflections. All problems become more obvious if you are hunting for secrets (gadgets, supplies, mini-events), which are usually out of the way and may require some of the worst jumping mechanics in gaming history. The only part of the presentation that gets a strong pass mark is the alien creatures, which is ironic given the goal is to kill them fast and keep them more than a stone’s throw away. 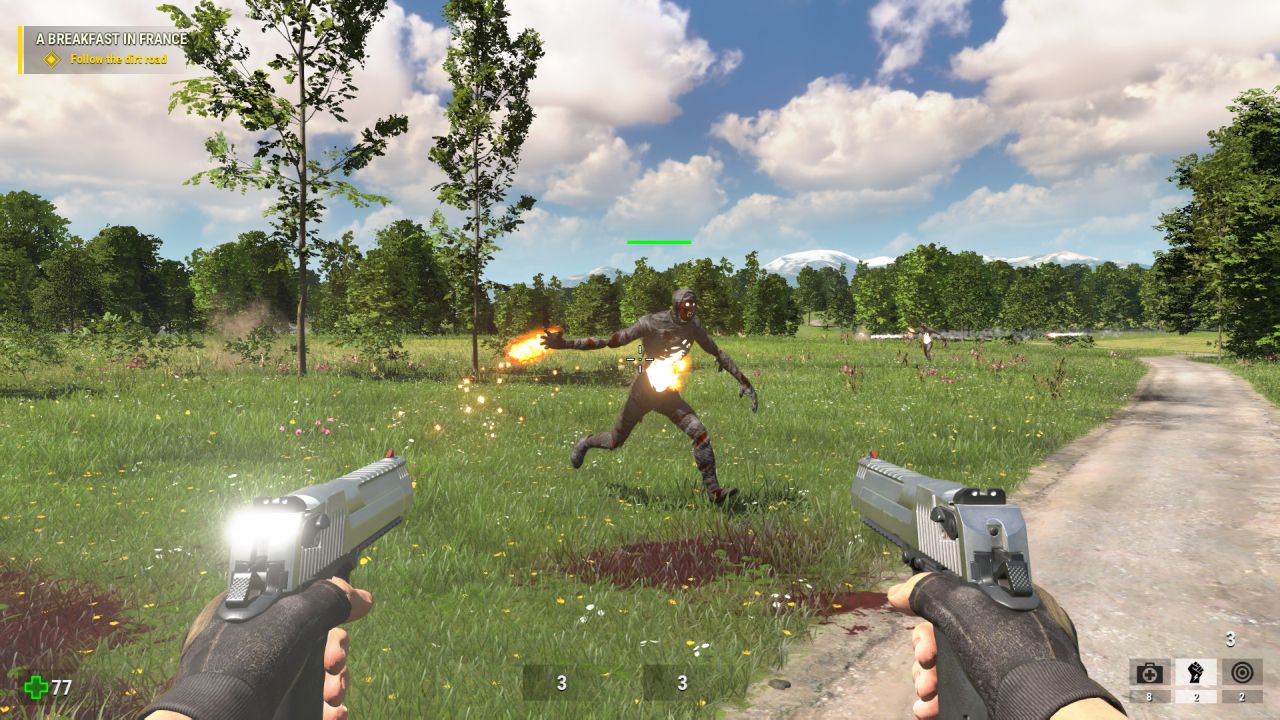 And technically it could be a lot better too. Certain enemy types emit particle effects that brutalize framerates. It also ‘hides’ detail in the direction you are not facing, so cutscenes with reverse shots have framerate dips as the camera switches back and forth to show grass popping into view. In normal gameplay, it was quite common for enemies to get stuck on corners or beside doorways. And you can always tell because the battle music keeps going and you just have to find where they are and kill them to progress. Speaking of music, it’s decent enough rehash of the last game, but somewhat of a buzzkill when you hear the drums before seeing any enemies.

Co-operative mode can be a fun, even though the technical issues become more obvious. With no competitive mode this time around, up to four players can go through the whole campaign. Various settings can be changed and the server list is appreciated (it even has text chat). Aside from the long initial load times, the game is fun with others because of the chaos and the ease at which you can just keep going through levels without many modern-day interruptions. Players don’t need to stick together, although stragglers might be teleported after a story cutscene. There is not much in the way of teamplay, aside from a general understanding to not deploy major gadgets simultaneously and to help each other find secrets.

When enemies spawn during co-operative play, they target one player randomly. And if that player happens to be halfway across the map, doing who-knows-what, then those enemies will either make the long journey or get stuck along the way. Shooting them does make them switch targets, but it was still rather common to see enemies bunched up against a piece of geometry. Plus there are other AI issues in co-op, with some enemies becoming pacifists and others disappearing. The co-operative mode is not refined, but there are fun moments like when the whole squad launches cannonballs across rolling hills. Dropping a stream of nukes is momentarily hilarious when infinite ammo is enabled. Co-op could have used a few more tricks, like randomized encounters or teamwork elements. 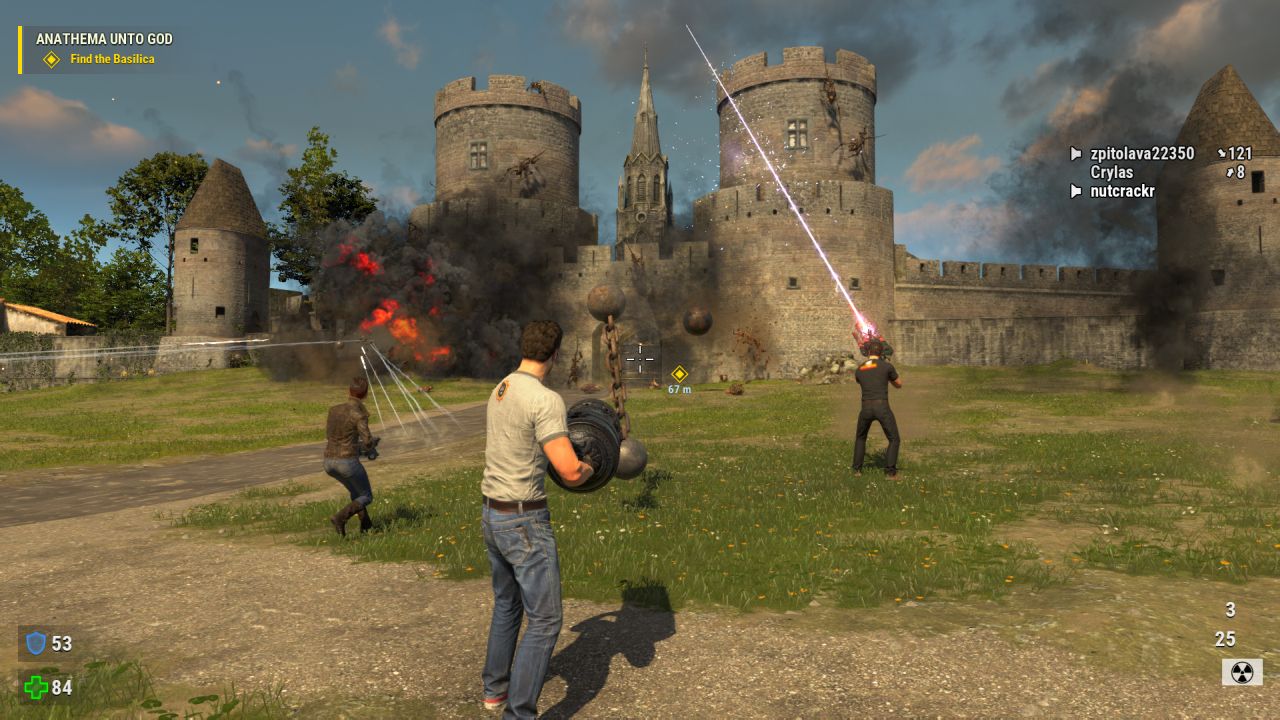 Serious Sam 4 has plenty of fun combat but it lets itself down artistically and technically. There is nothing wrong with the basic shooting or the sizable arsenal. Even the new gadgets and side missions fit with the series. And the fact that it’s practically a repeat of the original game is still mostly a good thing. But it falters when it comes to the polishing stage. The world is bland and often ugly, with sloppy technical issues everywhere. The co-operative mode has many problems but is actually quite fun when you brush them aside. If you liked the last game in the series then you should still enjoy Serious Sam 4, but more time was needed to turn this jagged rock into a gemstone.

Our ratings for Serious Sam 4 on PC out of 100 (Ratings FAQ)
Presentation
55
Ugly world design and characters, with generic locations featuring bland ruins and warehouses. Aliens look quite good and so do the weapons. Music is satisfactory but not much different from the last game.
Gameplay
80
Shooting enormous waves of enemies still has many upsides. New gadgets allow for some brief switches in power and the skill upgrades can make it worth trying to play a bit differently.
Single Player
60
Side missions help make this fourteen-hour campaign fun enough. And the battle for the best one-liner is occasionally interrupted by something resembling narrative.
Multiplayer
65
Although not without technical issues, the co-operative mode has a certain appeal that makes it easy to keep playing with others as chaos ensues.
Performance
(Show PC Specs)
CPU: AMD Ryzen 5 3600
GPU: XFX RX 480 GTR Black 8GB
RAM: 16GB DDR4
OS: Windows 10 Pro 64-bit

55
Technical issues are everywhere, from enemies getting stuck to cutscenes glitches, and performance is not great considering how the game looks.
Overall
67
Serious Sam 4 plays like its predecessors when it comes to the general shooting, featuring open areas and hordes of enemies. But it could have been better if it cleaned up the various technical and presentation issues that ruin the fun. 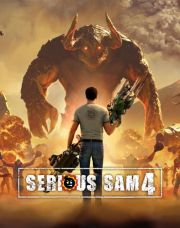 All videos for Serious Sam 4 (6)
Advertisement ▼