No need for Fury

After a shaky return from an extended vacation with last year's Darksiders 3, the Horsemen of the Apocalypse are back just a year later in spinoff/prequel Darksiders Genesis. Billed as an action-RPG spin on the formula, the main difference between Genesis and the previous entries is a change in camera perspective from third person to fixed isometric. If you were expecting Diablo-Darksiders, you will be disappointed with Genesis, but if you enjoyed the first two games in the series and don't mind playing from a top-down view, you will find a surprisingly worthy follow-up to those games in terms of pacing, action and gameplay ideas. 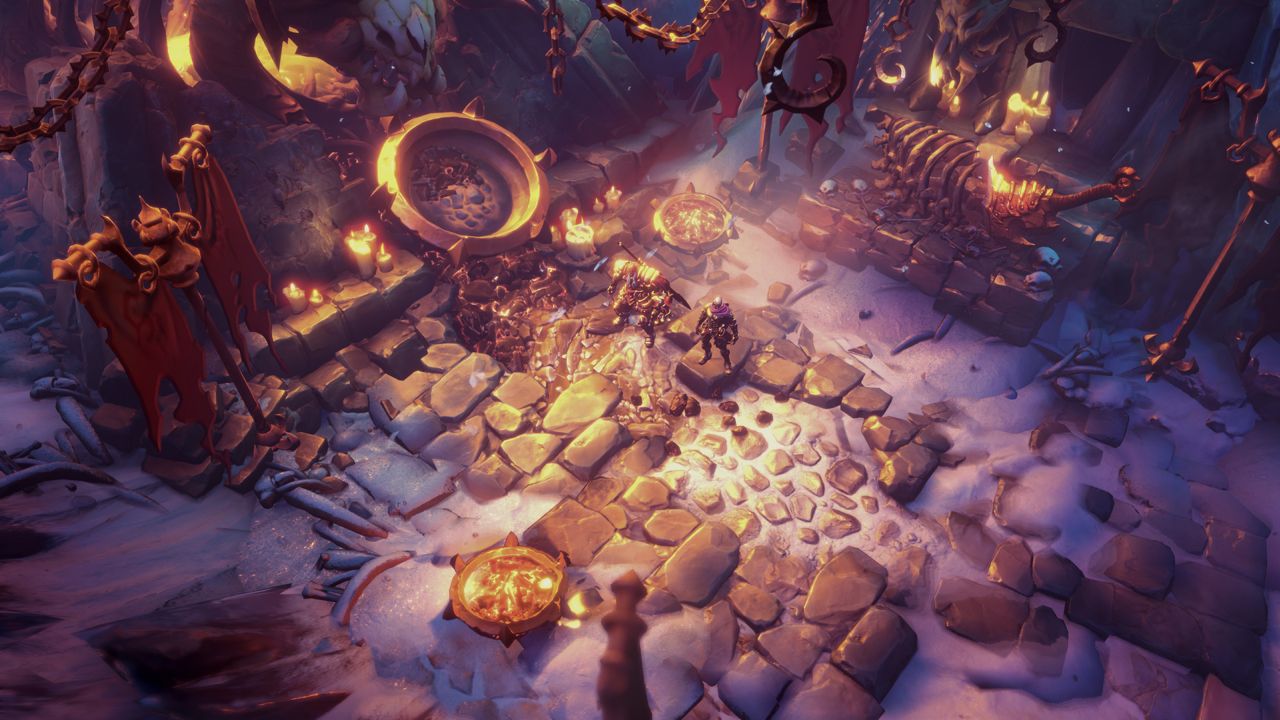 The first thing that will probably invoke memories of the original game is the return of War as one of the protagonists, alongside Strife who makes his debut. The story takes place before any previous games, and involves the two horsemen working together for the council that maintains the balance between heaven and hell. Your task is to stop the demon Lucifer from disrupting this balance, and you must work your way through several other demons or "Lords of Hell" first. If you enjoyed the narrative elements of previous Darksiders games, what is here is very much on par with those, including many returning characters with familiar voice actors. War remains very serious and straight faced while Strife is more of a smartass, and the interplay between these two personalities works well.

Despite the change in camera perspective, Genesis feels like a classic Darksiders game through and through. There are a mix of bigger, open areas where you can ride your horse around, claustrophobic dungeons, and a blend of combat, platforming and puzzles that feels very much in line with the first two games in the series. The story premise involves teleporting to a variety of discrete and highly varied locations to complete tasks for the Council and this makes for a great spread of distinct of locations and terrain.

Rather than choose to play as one or the other Horseman, you are able to swap between them at any time in singleplayer. During co-op, each player assumes control of one character. War is very much melee focused, while Strife has a variety of ranged attacks as well as some light melee capabilities. The hack-and-slash action in Genesis feels great thanks to good animations, including exaggerated enemy ragdoll physics and meaty sound effects. There is a good variety of enemies and most fights involve lots of smaller, weaker foes who make you feel powerful mixed in with tougher ones who can soak up a bit more damage and dish it out as well. War can attempt to parry/block incoming attacks, but on normal difficulty I rarely needed to. When an enemy is low enough health, you can press a button to perform a satisfying execution move that will cause them to drop extra loot including valuable healing orbs. 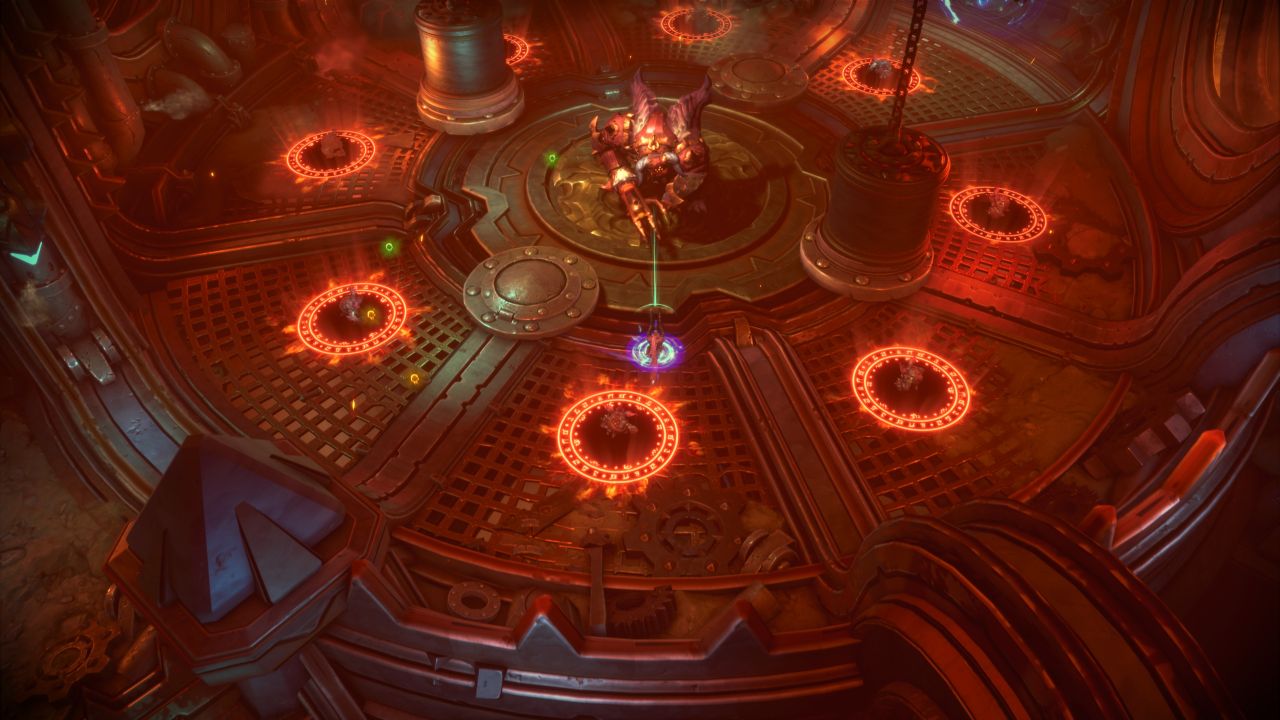 Though Genesis doesn't have a traditional ARPG-style randomized loot system with different weapons and armor sets to find, there is still a deep progression system. When you kill enemies, you gain souls, which act as a base currency. These can be spent on upgrades to health as well as Wrath, which is used by special attacks that deplete the Wrath meter. You can also find and purchase new special attacks and ranged weapons, though these are pre-set and not randomized. There are a good variety of different attacks and attack types that make the combat varied and enjoyable throughout the 15-20 hour story. You can also try and find special and well hidden 'void' armor pieces that make the Horsemen tougher, while trickster keys are used to unlock special loot-filled dungeons. As such, you are given plenty of reasons to poke around the corners of each area.

Both War and Strife also gain access to unique abilities and gadgets that serve combat roles but are mainly useful as puzzle items. Perhaps most prevalent is a thrown blade weapon that can be locked onto different objects and is used for a variety of puzzles. The puzzles themselves are generally well designed and not particularly difficult, but this particular item can be a bit unwieldy to use and lead to some frustrating moments here and there. Overall though, new mechanics and puzzle types are introduced at a good rate, and earlier levels contain puzzles requiring items you get later on, creating incentive to come back and replay them if you want to access every secret and find every item available.

The final and most in-depth aspect of the progression comes in the form of creature-cores, items dropped by enemies that have different bonuses and penalties similar to how armor or weapon bonuses typically work on other ARPGs. These might improve damage at the cost of health, or provide bonuses to the number of souls dropped by slain enemies among many other things. You can level creature cores up by finding multiple copies of the same ones. You have a set number of slots for cores, and must fill up minor slots to gain access to major slots for cores obtained by killing bosses. This system works very well and changing out cores is quick and easy; you will spend far less time fiddling around in inventory screens than in your average ARPG which proves refreshing with so many games shoe-horning in loot systems these days. 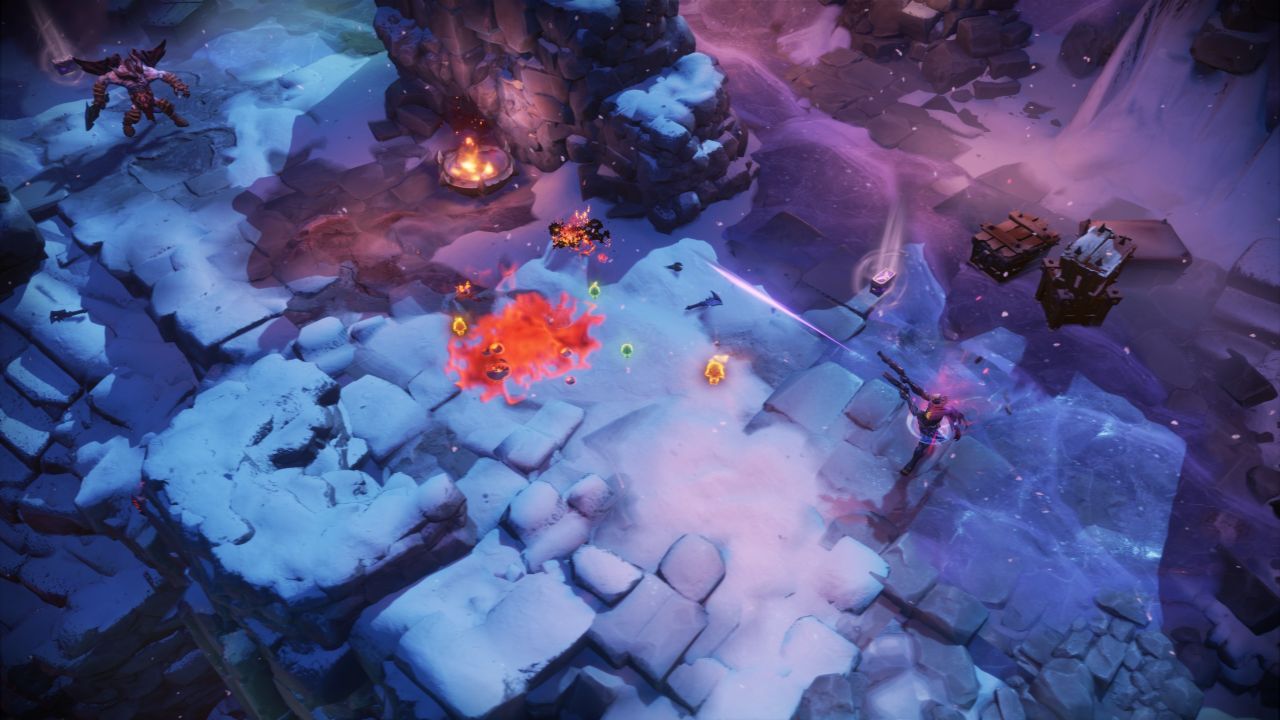 Speaking of bosses, there are a lot of them in Darksiders Genesis. Many levels contain multiple bosses, some of them optional, and they are mostly well designed and very entertaining. On the normal difficulty, combat and boss fights aren't particularly difficult, but bosses are varied, have interesting attack patterns, and some have multiple phases and require a bit of strategy to beat. Several of the 17 chapters are just boss fights and these prove some of the most exciting moments in the game, and break up the more exploration and puzzle-heavy levels nicely.

Aside from some occasionally fiddly puzzle controls, the biggest issue in Genesis is the camera. Though the isometric perspective works great for the most part, when the camera goes behind a solid object, you see the outline of your character but not enemies, so you might have your view of a fight blocked by a pillar or bridge in some cases. The platforming controls work well once you get used to them, but again the camera perspective can make it difficult to gauge jumps. Your shadow appears directly beneath your character while in the air which helps a bit, but there were still plenty of awkward moments.

The only other thing I can really complain about is the map, or more specifically, the fact that you don't see where exactly your character is on the map; instead only the general region you are in is highlighted. You can find special maps hidden in levels that show the location of all items, so perhaps this was done to make it a bit more of a challenge to find them, but it lead to some navigational confusion on a few occasions. Add in the fact that you aren't shown even the approximate location of objectives on the map, meaning you might accidentally progress the story when you wanted to keep exploring, and this aspect of the game certainly feels like it could have used some more fine tuning. 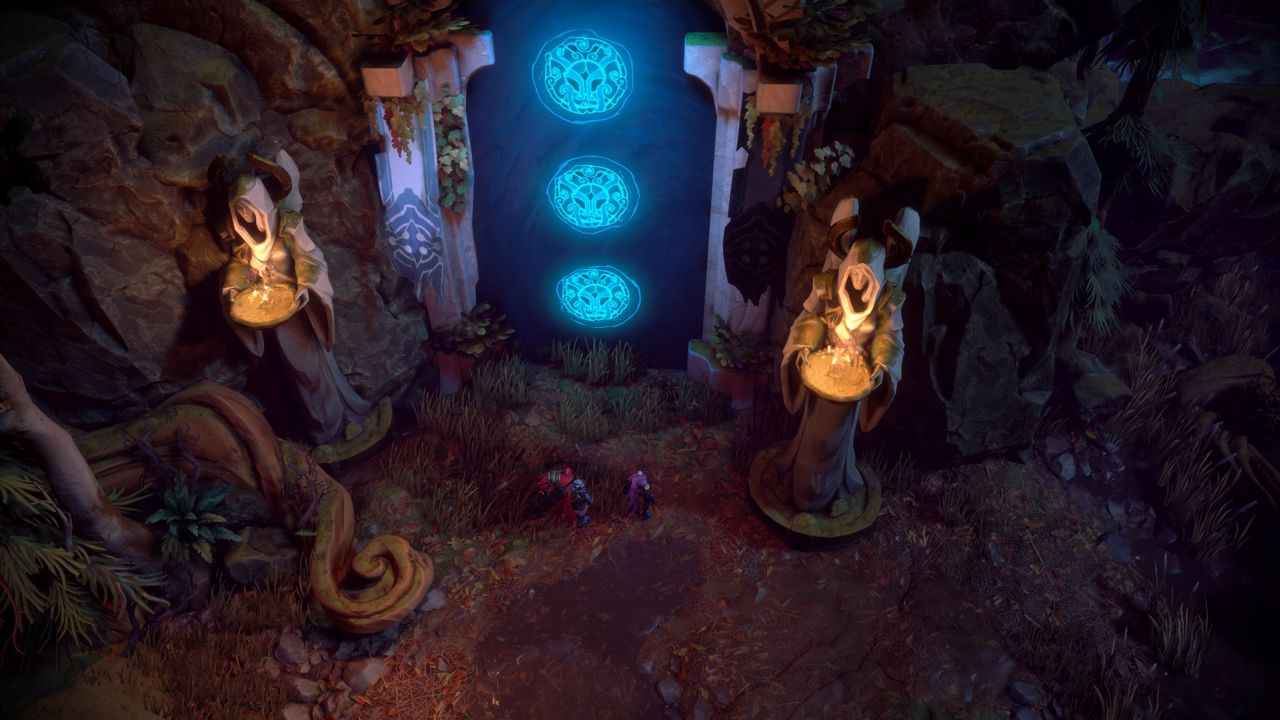 Outside of the story missions, you can try out combat arenas that are unlocked as you progress through the story. These have ten waves of increasingly challenging enemies with a boss showing up on the final wave. The faster you complete these levels, the more points you get which let you access souls or other useful items, that can improve your character which carries over in the story missions. This is a fun but straightforward mode that lets you focus on the strong action if you aren't in the mood for puzzles and platforming. Of course, you can also do everything in co-op both locally via splitscreen or online, which seems to work quite well and is a great feature to have.

After Darksiders 3 featured mostly drab urban environments, Genesis sees a glorious return to much more fantastical ones. You will traverse hellish fiery dungeons, snow-bound castles and lush forests among many other locales. The game has a slightly stylized look, similar to what the original games used, and looks great overall thanks to good lighting and colourful effects during combat. The game runs very well, though I did experience a handful of bugs such as getting stuck in the environment forcing a reload, or some temporary visual effects from combat lingering in the air permanently. The audio is equally good, with strong voice acting, great sound effects that make combat oh-so-satisfying, and a really excellent original mostly orchestral soundtrack that might be my favorite this year.

Despite its status as a budget-priced spinoff, Darksiders Genesis proves to be the best entry in the series since the original two games. Fun combat, generally well designed puzzles and great environments really make this feel like a proper Darksiders game despite the change in camera angle. If this shift in perspective and the prospect of a few minor issues with polish and occasionally fiddly controls don't sound like deal breakers, Genesis can be easily recommended as a great action adventure game.

Our ratings for Darksiders Genesis on PC out of 100 (Ratings FAQ)
Presentation
85
Genesis looks great thanks to varied locations and strong visual design, though the camera occasionally misbehaves. Audio design is also very good and the original soundtrack is excellent.
Gameplay
75
Enjoyable combat with lots of options across two characters and good progression, with fun and well designed puzzles with occasionally awkward controls. Platforming works well enough but the camera can make it difficult at times, and navigation can be an issue due to not seeing your character's location on the map.
Single Player
80
A fun prequel story that fits in well with the other games that should take most players 15-20 hours. Switching between the two Horsemen works well and the pacing is generally excellent. Combat arenas are a fun distraction and good way to improve your characters.
Multiplayer
80
Playing through the game in online or local co-op works well and offers up a similar experience to Singleplayer.
Performance
(Show PC Specs)
CPU: Intel i7-6700k @ 4.0ghz
GPU: Nvidia GTX 1080 8GB
RAM: 16GB DDR4
OS: Windows 10 Pro 64

80
The game runs great and has short load times, though I did experience a handful of bugs with the worst being getting stuck in the terrain and having to reload a save.
Overall
80
Darksiders Genesis marks a return to form for the series, with a classic experience underlying the shift in camera perspective and budget price tag. Some minor issues with controls during puzzles and navigation aren't enough to dampen enjoyment of this surprisingly great prequel spinoff. 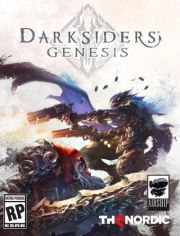 All videos for Darksiders Genesis (3)
Advertisement ▼