Despite its lack of originality, Darksiders is a fun and brutal blast that will keep you entertained from start to finish

It isn’t very often that an action adventure game in the same vein as The Legend of Zelda or God of War comes to the PC. It’s even less often that such a game that is actually worth playing comes to the platform. Luckily for PC gamers, Darksiders is such and game, even though it lacks some of the features you might expect from a PC title. It also borrows heavily from other games within the genre, as well as some puzzle games like Portal, although it does such a good job of borrowing and blending elements from all sorts of different games you probably won’t mind that a lot of what you are doing feels rather familiar. 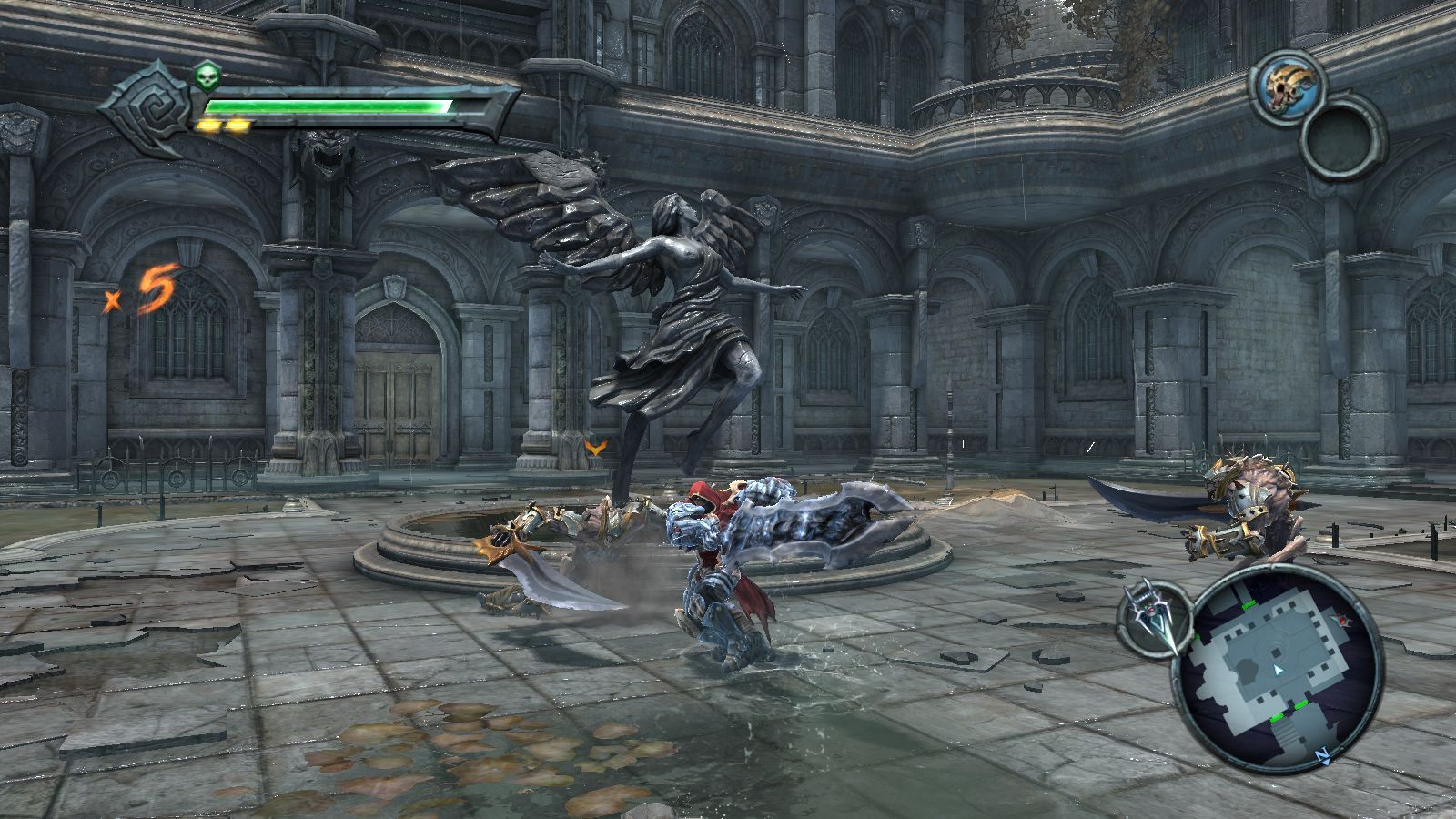 When talking about swords, size Does matter

This is especially true since many of the games Darksiders borrows from like Zelda and God of War are games seen only on consoles. If you haven’t played these games, Darksiders will feel much more fresh and exciting, although if you have played those games you will probably still find a lot to like in this entertaining, substantial and well-paced package.

Darksiders follows the story of War, one of the four horsemen of the Apocalypse, as he comes down to Earth in what appears to be the apocalypse, but in actuality is a misunderstanding that leads to a fight between heaven and hell – or their equivalents, they are never actually referred to as such in the game. War is blamed for this conflict, and it is your job to regain the balance between good and evil. The premise is intriguing but it is in the telling of the tale that the game falters – it can be hard to figure out exactly what is going on at times, although the overall structure of the game is simple enough. You must bring the hearts of the 4 ‘chosen’ to someone who will in turn help you figure out who really is responsible for this war. 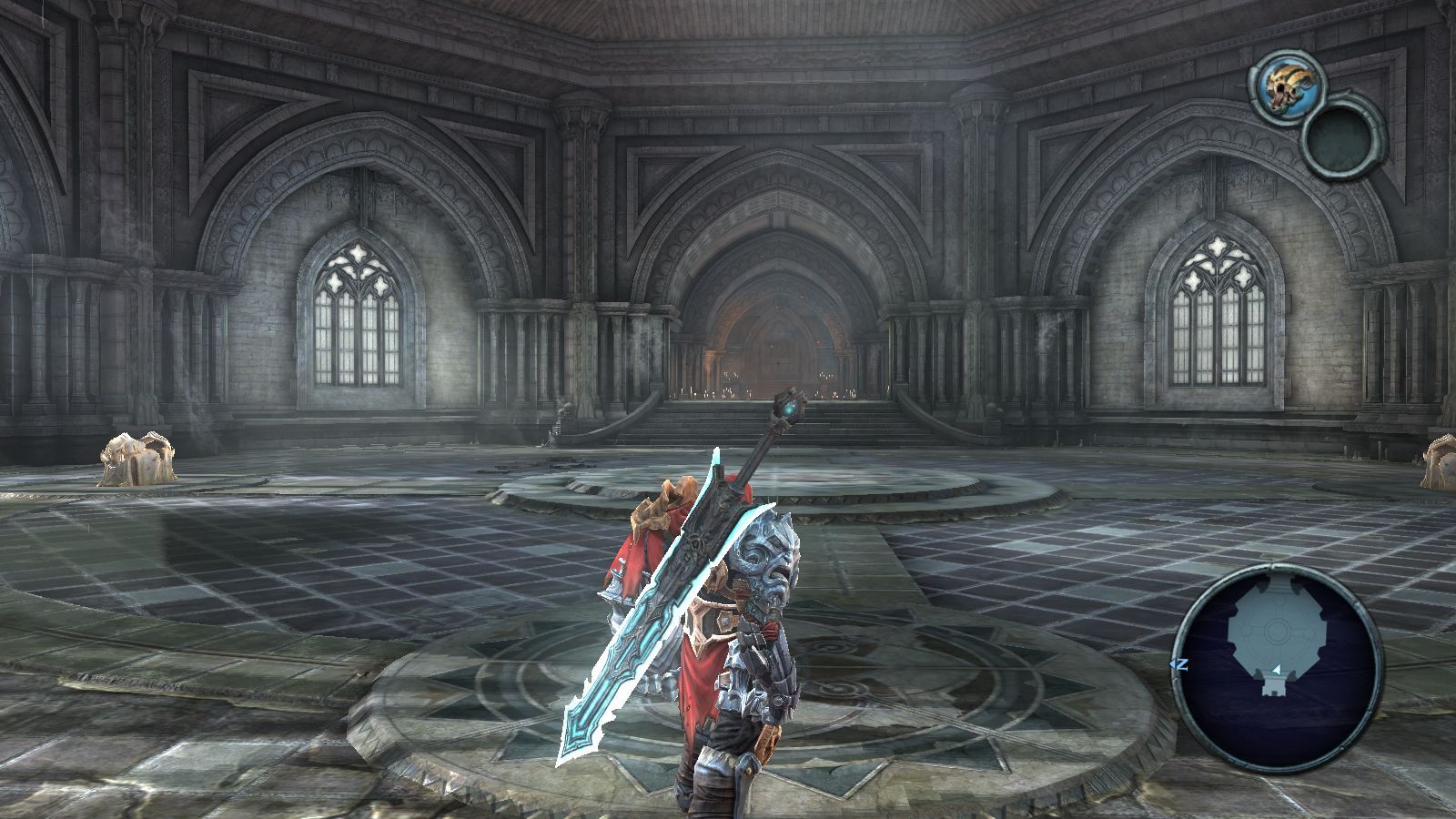 Some indoor environments are quite visually impressive

While this structure probably seems like it would lead to repetitive gameplay, the expert pacing of Darksiders ensures that you are never doing the same thing for very long. The gameplay is divided into combat, puzzle, platforming and boss fights, sometimes combining multiple elements at once to make for some really exciting set-piece battles and boss fights. The game takes about 12-15 hours to complete, so the fact that there is relatively little repetition makes for a very enjoyable experience that you will feel compelled to finish.

The combat is fluid and fun, allowing for both button mashing as well as precise combos. War will be able to use his primary weapon, one of two secondary weapons (which you can switch between as often as you like and at any time), and one ranged-attack. Everything can be upgraded to deal more damage, and combos can be unlocked and upgraded as well. Primary, secondary and ranged weapons can all be used in a fight at once which makes things very intense and engaging. Once you have done enough damage to your foes, you can choose to finish him or ‘it’ as the case may be, off with a brutal finishing move or simply continue bashing away until the baddie bursts into a colorful swirl of souls, which War will collect in three forms: wrath, health and a form of currency. 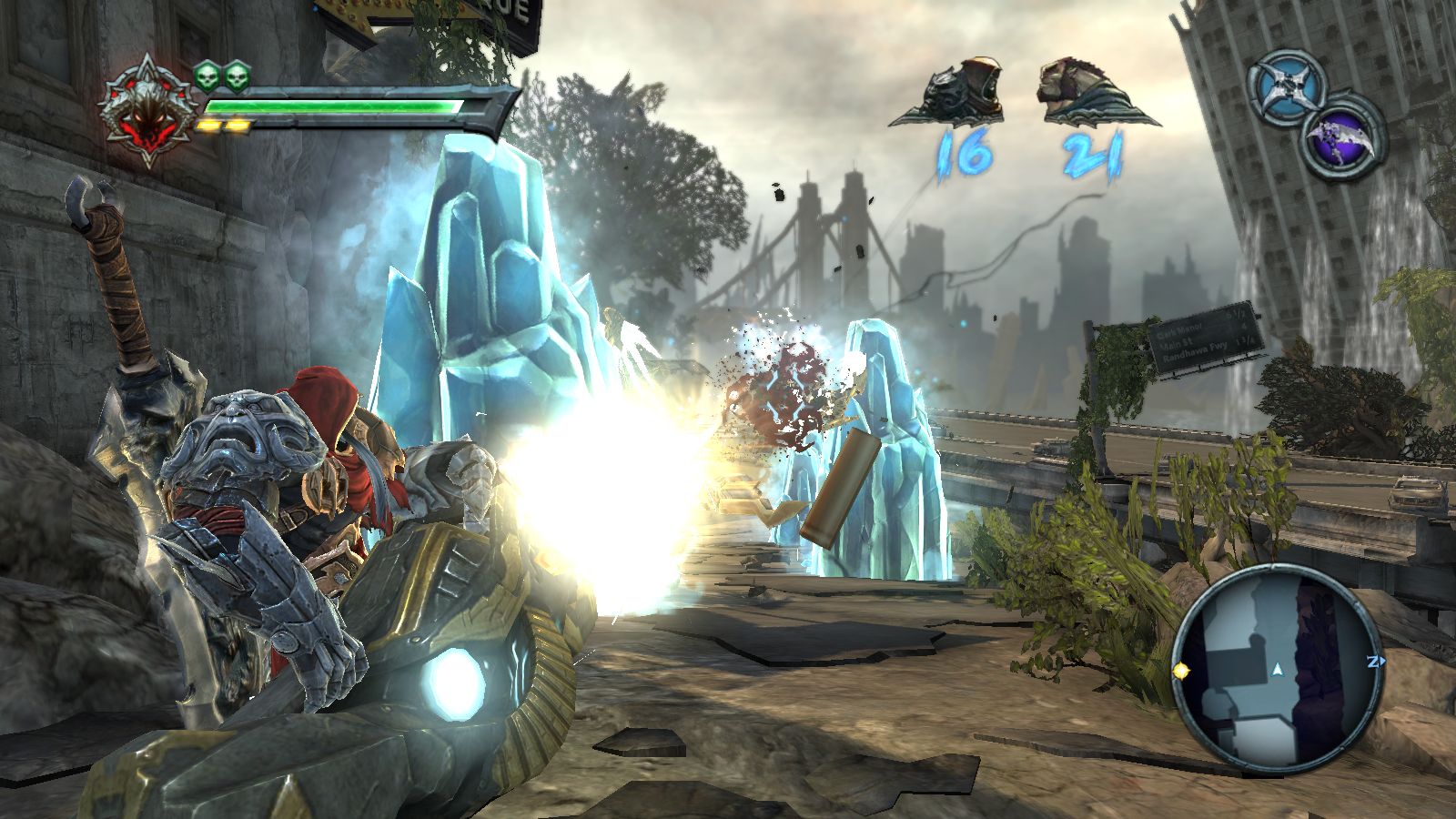 Wrath is used to fuel War’s special abilities, health is, well, health, and currency souls can be spent on upgrades for weapons, attacks or special items like crystals that will restore all of War’s health and wrath as soon as he is dealt a fatal blow. Later you will unlock War’s Chaos form, which will allow War to briefly morph into a nearly invincible, damage-dealing juggernaut which will ease the difficulty of some of the later encounters. The Chaos form can only be used once it is fully charged, and it is charged as war deals damage with his primary weapon, which prevents you from exploiting it too much.

Part way through the game you will unlock War’s horse, Ruin, which will give you the opportunity to run around slashing at foes from horseback. Ruin is a little unwieldy, in one boss-fight in particular, but overall the all-to-few sections you spend galloping around present a nice break from the trudging around on foot. 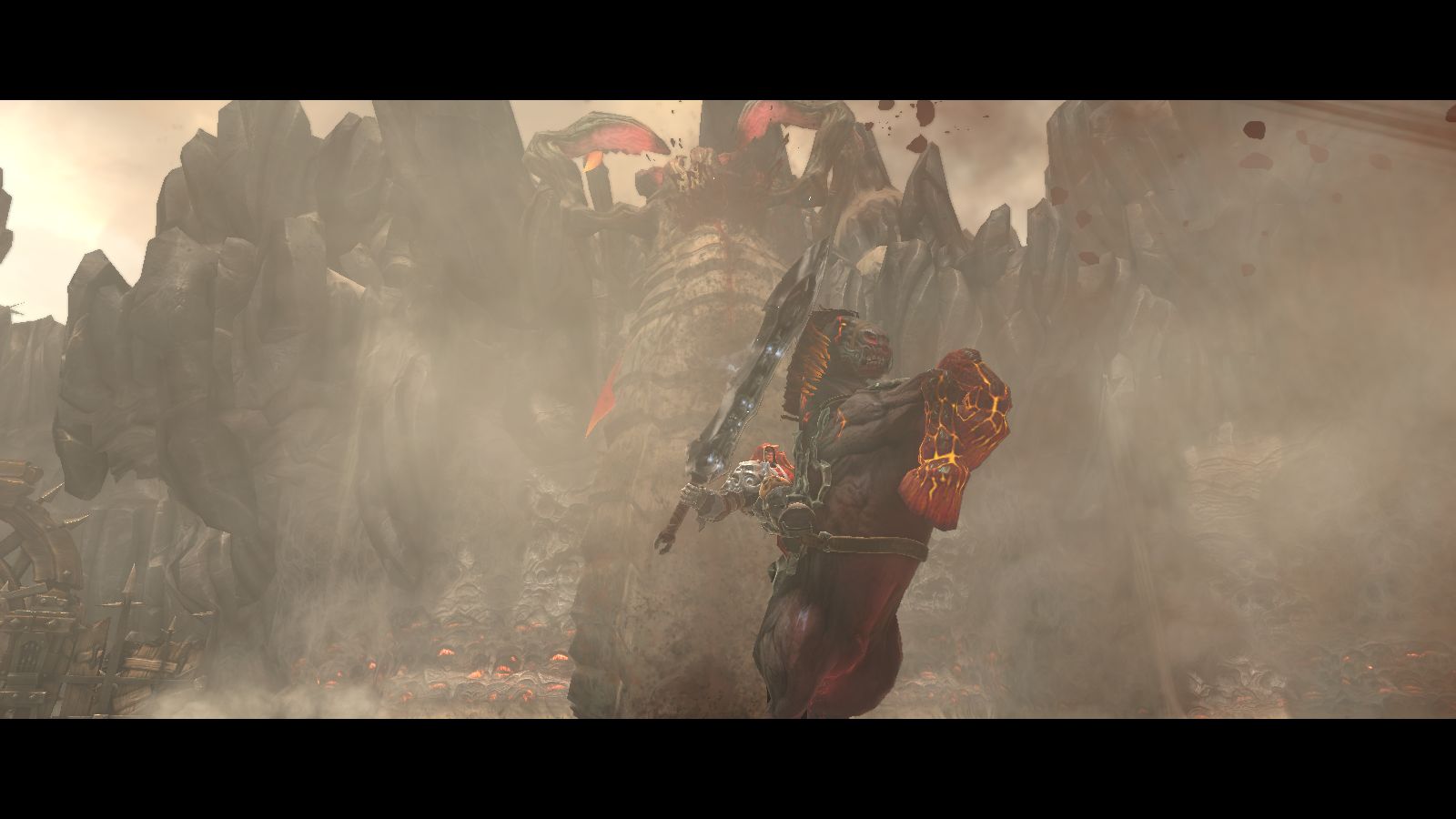 Also breaking up the combat-puzzle-platforming routine are a number of shooting segments where you get to run around with a heavy weapon and gun down enemies. The weapons aren’t particularly inventive but they are still a lot of fun to use. All of these little additions make for a game that is so well paced that you won’t want to put it down since you’re so interested to see what comes next. Usually, what comes next doesn’t disappoint.

After the introductory sequence of the game, you are given the freedom to explore game world as you like; it’s not an open world game but it’s far from linear. You will need some of War’s abilities and weapons that you unlock later in the game to access many areas, so the further into the game you get, the more you can explore. Exploration is rewarded with items that increase War’s maximum health and wrath, as well as specialty items similar to those you can purchase with souls. Thorough exploration can extend the game time by a number of hours as well as bulk War up for some of the tougher encounters; although even without them Darksiders is not a particularly difficult game.

The puzzles, while never overly challenging, are complex enough to give you a good sense of satisfaction upon completing one without the help of a walkthrough. Even later boss fights are more about puzzle solving than using brute force; most will require you to find, expose and exploit a weak spot through the use of War’s special weapons and will require careful timing and a bit of creative thinking in order to beat. 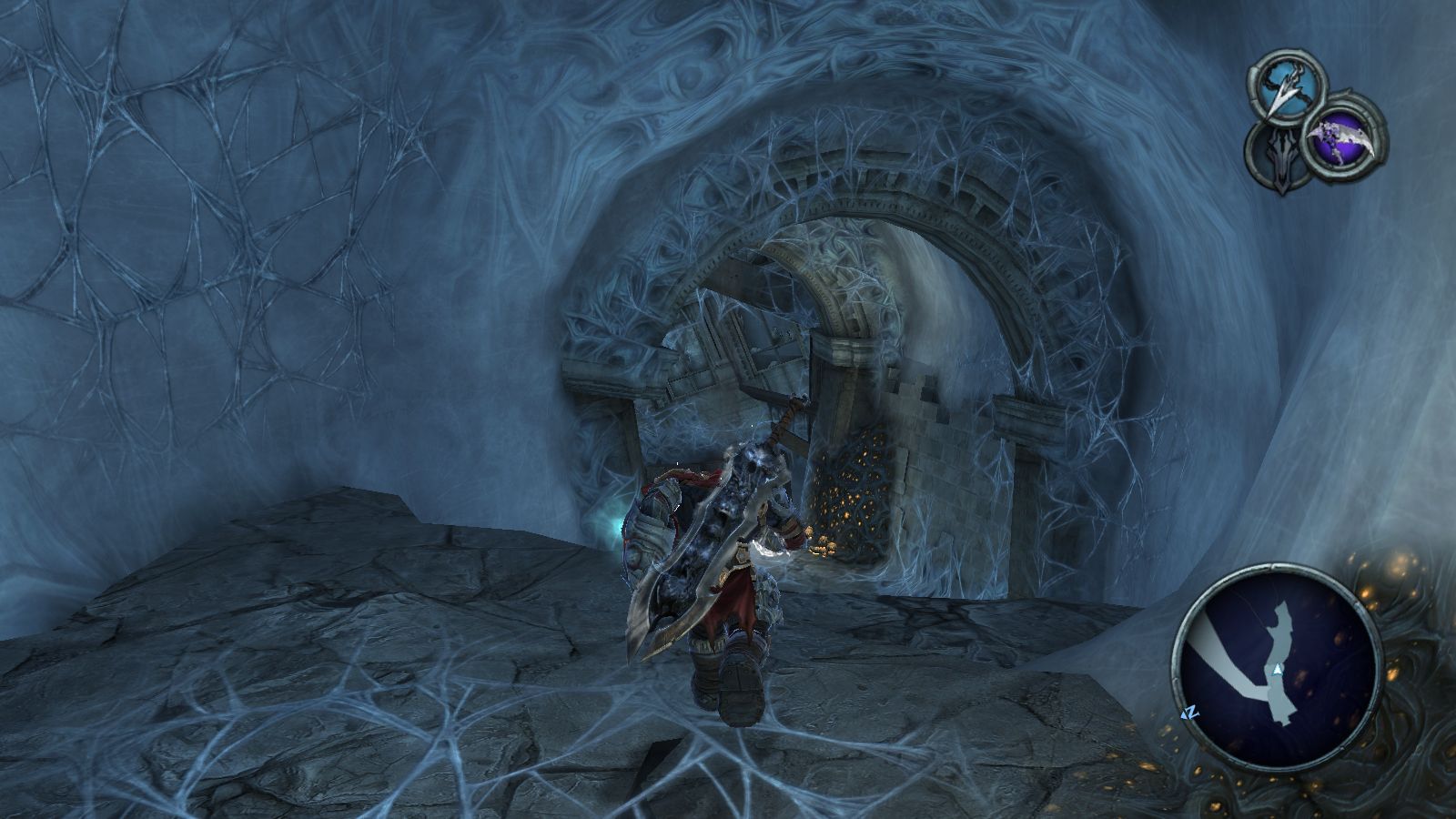 Shelob's lair has nothing on this place

The platforming can be a bit problematic, especially if you are using a keyboard and mouse. The controls for jumping can be rather unresponsive, and you will get used to seeing War charging off a cliff to fall to his death because you were too late in pressing the jump button, or it simply didn’t register. There are other times when you will have to press a button several times before it registers, but these occasions are few and far between.

Even more problematic is the default control scheme when using a mouse and keyboard – the dodge button is in an incredibly awkward spot, and you are required to press two buttons at once in order to pull off some of War’s special moves. Once you re-map the controls, they are for the most part responsive and effective other than the jump and dodge buttons which remain temperamental although generally functional. The inventory system also feels awkward and clunky when using a keyboard and mouse and the game’s console heritage is never more apparent than when you are trying to swap upgrades or equip items. It’s not broken; it’s just far from streamlined.

As a port, Darksiders looks decent and runs pretty well, but the complete lack of graphical options other than resolution means that if you have a weaker rig you should probably pass on this title. I experience absolutely no crashing or technical instability, although my frame rate suffer a bit in some of the larger battles that occurred in larger areas of the game. The cutscenes are obviously straight from the console version of the game and look blurry and washed out compared to the crisp in game visuals. 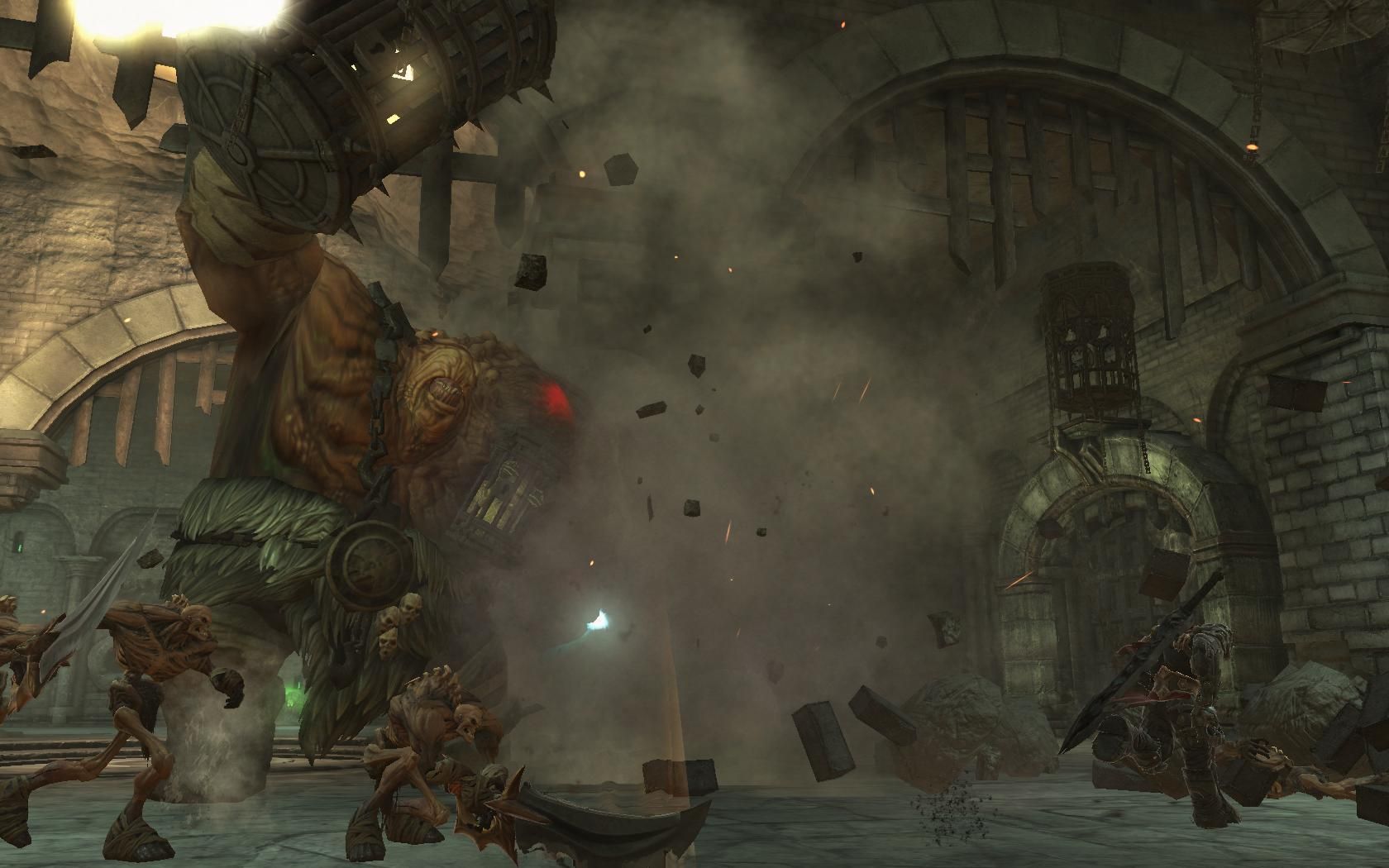 Bosses can be tough, but follow a repetitive formula

The game also sounds fantastic, with a great ambient soundtrack and high quality sound effects. Voice acting is a mixed bag, with the obvious stand out performance coming from Mark Hamill who voices your guardian... demon who gives you advice in some of the tougher puzzles and boss fights.

Overall there isn’t a lot in Darksiders that hasn’t been done before, but nothing is done poorly and the combination of many different highly functional gameplay elements make for a fun and cohesive experience that fans of action adventure games will love.

Our ratings for Darksiders: Wrath of War on PC out of 100 (Ratings FAQ)
Presentation
75
Darksiders looks sharp apart from the cutscenes, and the game sounds pretty good overall with voice work being inconsistent, menus are functional but a but clunky.
Gameplay
83
Varied and fun with brutal, satisfying and engaging combat, great boss fights and interesting puzzles although the controls can be awkward and unresponsive at times.
Single Player
80
The story is intriguing but at times hard to follow, the length is decent at around 15 hours, although there is limited replay value.
Multiplayer
NR
None
Performance
(Show PC Specs)
CPU: Intel Core 2 Duo e7200 @ 3.1ghz
GPU: Powercolor Radeon HD 5850 PCS+
RAM: 4GB DDR2
OS: Windows 7 Ultimate 64 bit

73
While technically stable, a lack of graphics options means that you can't really do anything about the minor but noticeable frame rates issues.
Overall
80
Darksiders may incur a "been there, done that" feel for action adventure veterans, but it's also a polished and extremely well paced game that fans of the genre should love.