Sports franchises face the challenging task of bringing in fans year after year, keeping the features that are popular while improving those that underwhelm, and doing all of this on a tight release schedule. Some, with bigger budgets and fan numbers, such as EA Sports FIFA, take the time to experiment with things like revamped story career modes and the ever-popular FIFA Ultimate Team. But other series are just happy to keep pace and a steady the course. EA Sports NHL franchise has been coasting for a while; implementing some big changes here and there, but largely feeling the same with each iteration. But as some might say, good things come to those who wait. With this year's iteration, the series is finally taking worthwhile steps forward. 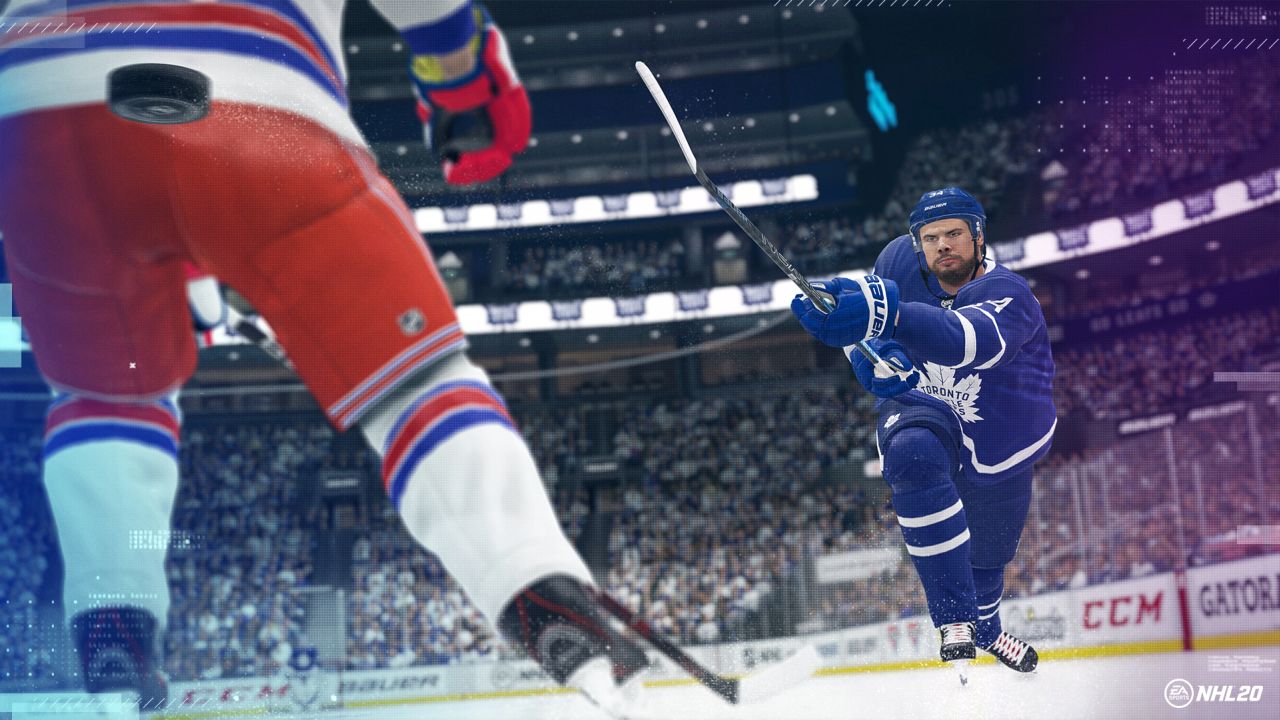 The NHL franchise has been subtly tweaking its on-ice product annually, as sports games do. But with NHL 20, at least at launch, it seems the game has finally hit a sweet spot. It's a progressive evolution of last year's game, but thanks to a few good modifications it plays a great game of virtual hockey - one of the few times the series has hit this mark this console generation. There's the typical slew of additions that you may or may not notice, like trademark shooting styles of superstars, refreshed animations and so on. Penalties seem decently balanced, and poke checking/stick lifting are effective enough. But the key difference comes with the updates to dekes and goaltenders. NHL 20 simply feels good to play and satisfying to score, no matter your skill level. Goalies are no longer the iron walls for everyone except those who can abuse their animations – players can now pull off great moves with ease and trick the netminders. Yes, they are now admittedly easier to beat, but it's a good change, especially for players who, in the past, saw great plays absolutely stonewalled. Instead, the game now becomes much more about positioning, strategy, and team play rather than individual trickery. These changes extend across all gameplay modes, and those modes are better for it.

That's not to say that the gameplay is now perfect; the AI still struggles with consistency, and friendly teammates leave much to be desired. This is especially evident in the main offline modes of Franchise and Be a Pro. Teammates will often get stuck skating into an opponent, into each other, and into the net, unable to breakout. They stick to their positioning regardless of what you do, making no adjustments to move and cover another opponent. They also don't really attack the puck carrier or make any plays unless you specifically control them. Meanwhile, the opposition puts up perfect tape-to-tape passes, intercepts absolutely everything, and getting them off the puck is highly difficult even with good poke checks and hits – and that's on Pro difficulty. Thankfully though, NHL still offers the extensively customizable gameplay sliders to adjust the gameplay the way you see fit.

Speaking of the offline modes, all of the usual suspects return from the years' past without any changes, including Be a Pro. Franchise mode does get some welcome tweaks and additions – you can finally re-sign players anytime during the season, something that has been missing for a shockingly long time. Another new addition is the ability to manage the coaching staff, which boils down to having another chemistry factor to worry about, as well as their contracts and hiring/firing. Also new is the Fog of War, a feature inspired by FIFA that obscures player overall ratings and potential, making you scout them first, even across the NHL. Thankfully, and this is where NHL continues to lead the way in flexibility, all of these things can be turned off – morale, Fog of War, finances, etc - letting you focus on things you want. So while these new features aren't breakthroughs for Franchise mode, it remains a fairly solid and in-depth experience for budding hockey GMs. 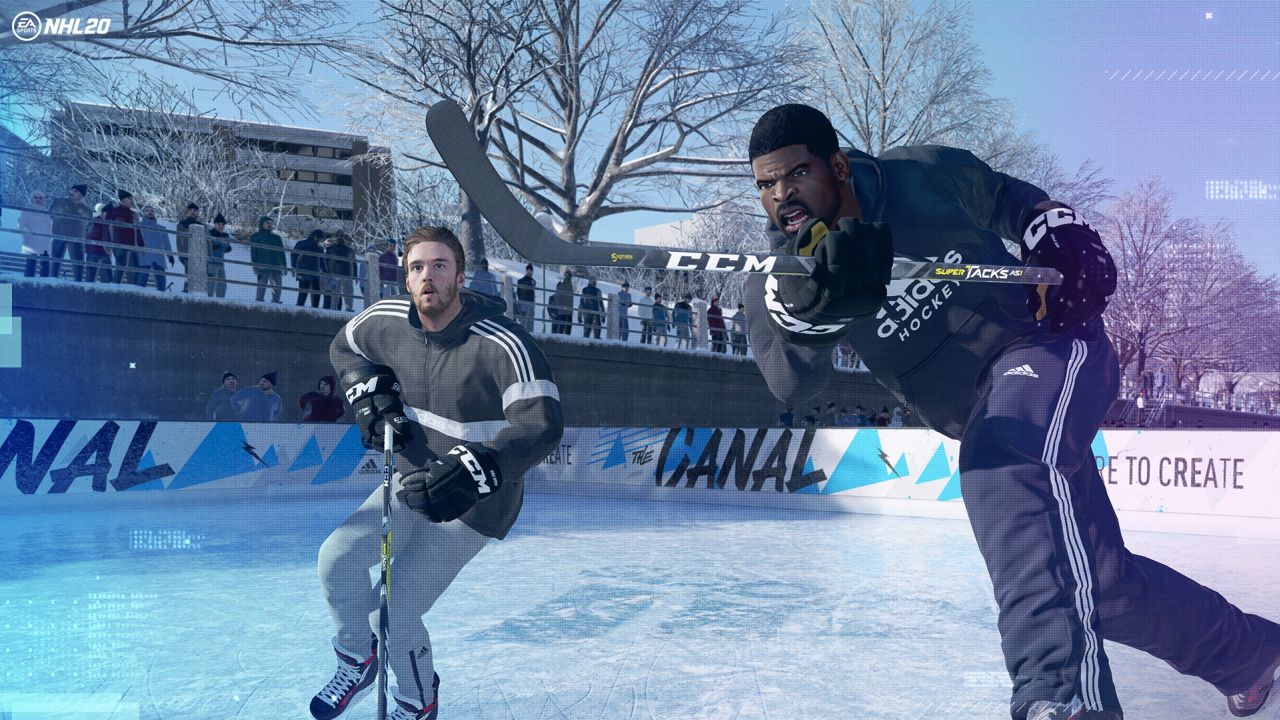 Online modes are where most of the development focus is these days for sports franchises, and NHL 20 is no different. However, the changes being made here are actually worthwhile and introduce some fun experiences. Last year's World of CHEL returns, letting you create and customize a casual player with lots of clothing items and celebration animations. The ProAM offline mode is still dull because you must grind through linear games that start off too easy and take a while to ramp up. And the EA Sports Hockey League also makes its return, without any notable changes. It's still a well designed mode after its revamp a few years ago, putting participants on a more or less level playing field regardless of how many hours you've put into the game. The class-based skater system still works well and the ability to slightly tweak the players to your liking helps build a balanced team to compete in the league or drop-in games. However, with no changes, it means last year's annoyances return too, including no way to handle or report griefing and extensively long matchmaking times.

The Ones (1v1v1) and Threes (3v3) modes return with their outdoor rinks, but with the various gameplay changes to shooting and goalies, they are much more enjoyable this year. It's now highly critical to keep the opposition from breakaways and clean dekes, as these spell certain goals. But that makes for a better and more intense game. Further, while last year these two modes were just one-off games, NHL 20 introduces the Eliminator approach. It puts you into an 81 player tournament bracket, and offers rewards the deeper you're able to go. The Eliminator of both Ones and Threes adds longevity and structure to the modes by giving players more to play for.

HUT, the Ultimate Team mode where you put a team together by opening player packs, makes a few changes to also elevate its fun factor. Notably, it borrows the Squad Battle mode from FIFA, which gives players a series of custom squads to play against and earn points. The more points you earn, the greater the rewards after the season is over each week. The mode is as fun here as it is in FIFA, giving you a viable new source of packs. Between that, free daily packs, challenges and daily objectives, it finally feels like you can return to HUT every day and have something worthwhile to do to grow your team. With the autofill function working well, you can quickly make adjustments. Trading in sets of players for upgrades still feels like bad value, but at least it's a guaranteed way to improve the team. You can also head to the Auction House, but the prices seem completely random; perhaps partially due to the missing function of quickly checking the existing listings for your planned player auction. 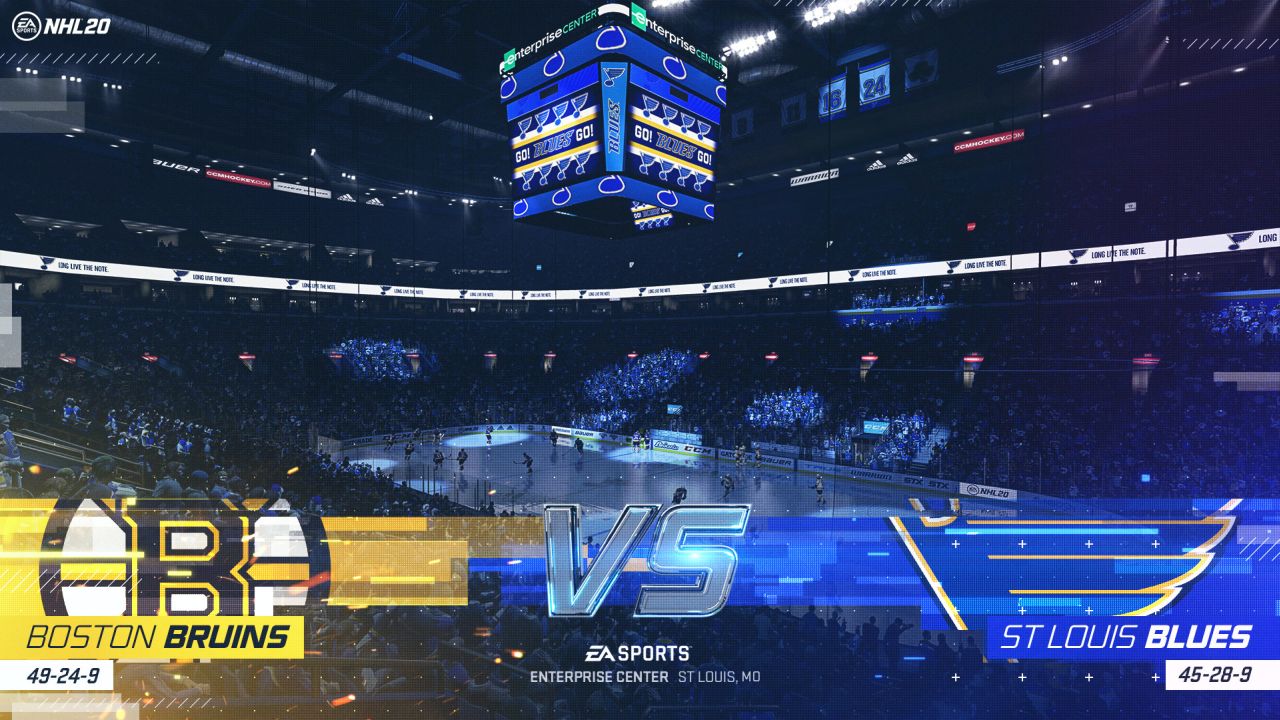 This year's game is finally making notable strides forward, so it's extra disappointing to see that existing problems keep returning. The menus remain confusing in World of CHEL, and they remain terribly slow across all modes. NHL easily has the slowest menus of any sports franchise on the market today, and it's baffling. When playing online, issues get even more serious as lobbies freeze, crash, players disconnect, and matchmaking takes a while. EASHL, which was once the marquee online experience, suffers quite a lot from these connectivity issues and poorly designed lobbies. The entire game way too often feels like it's on the verge of crashing or grinding to a halt. At least, when you do manage to get on the ice online, the gameplay is relatively smooth. But getting there is one heck of a nerve-racking experience.

NHL 20 makes an expected choice of refreshing its presentation, and the results are mixed. The NBC deal is apparently over, so we're back to some new, but generic, TV presentation overlays, and a new commentary team. The scoreboard has been moved to the bottom of the screen – it's not some kind of revelation, just a slight annoyance, especially when it flashes distractingly during powerplays. The new commentators do an okay job, but because they are new, the phrase pool is quite limited and so there's a lot of repetition and a few gaffes. There's a new replay package for Play of the Period/Game, which is neat at first, but this unskippable camera sweep and sound effect does get old after a while. On the other hand, online modes don't get any replays or cinematic camera angles during breaks in play, leaving you to stare at the exact same corner of the area or some far-off hut when outdoors. But in offline career modes, you get the proper replays and highlights during breaks, but not the Play of the Game segment, which is strange.

Animations also seem to vary in quality more than before, with many odd moments. Following the whistle, players teleport and snap into animations, or when celebrating a goal they stop dead in their tracks so the team animation can join them. During and post fights, the referees lose their minds and pretty much glitch out. For a specific camera angle, as players skate by their bench in celebration of a goal in Franchise mode, the main coach’s head is a freaky black box – likely because the game is trying to leave that space flexible because of the new feature letting you hire randomly-generated coaches with unique looks. The lack of polish is just a bit too visible this year. The soundtrack and sound design remains largely the same, offering a mix of indie and rock. 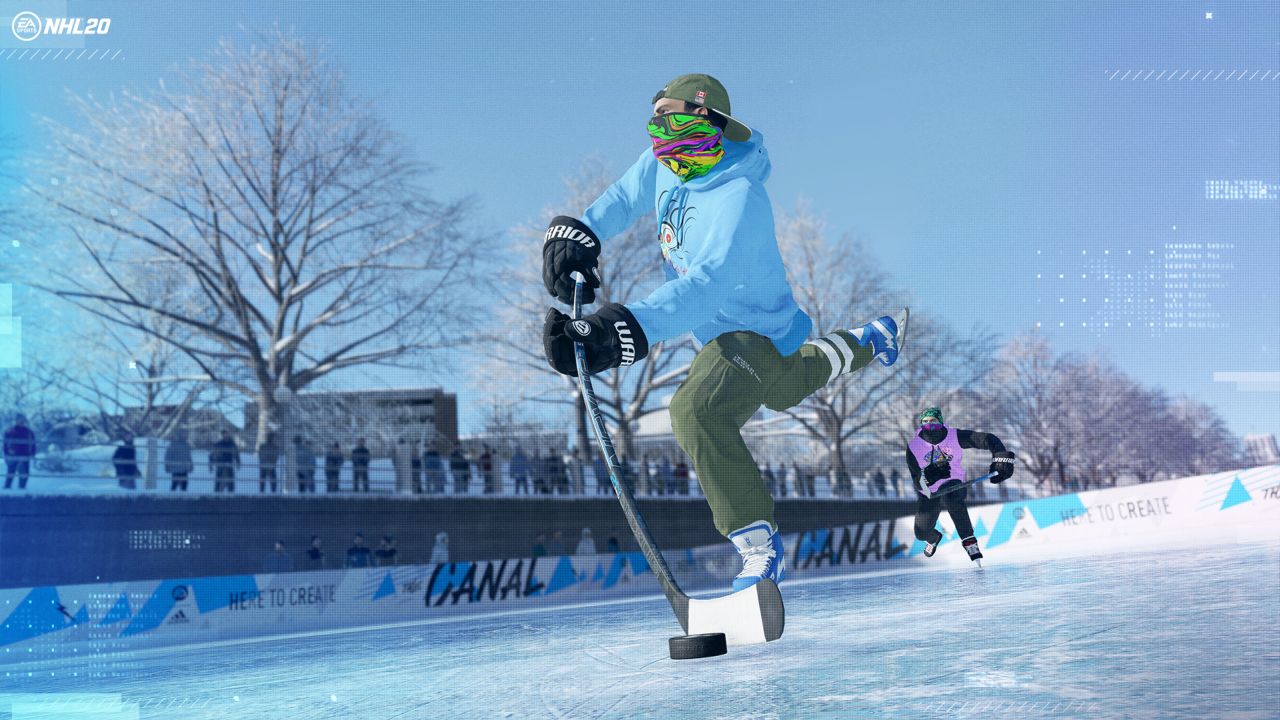 NHL 20 is the first time in a while that makes the series finally feel like it's moving – and in the right direction, no less. The gameplay balance at launch is great, especially online, which is a rare feat, and hopefully one that will persist as new sliders are released by the developers over the course of the year. Offline, things still need some tweaking, and the AI is in need of patching, but thankfully the franchise remains highly flexible in letting you alter the single player experience. The online gameplay is further bolstered by fun new modes like Eliminator, and with plenty of ways to earn rewards in HUT, there's no shortage of things to do. It's just too bad that the technical and presentation aspects haven’t been improved much, and modes like EASHL and Be a Pro remain untouched. While these have always been a sore spot, with the rest of the game now trying to make forward strides, they become an active detriment. If you've been feeling like the series hasn’t done much in recent years, NHL 20 finally offers some good reasons to get back on the ice, in spite of a few rough patches.

Our ratings for NHL 20 on PlayStation 4 out of 100 (Ratings FAQ)
Presentation
70
The new presentation package doesn't feel all that fresh, and various animation glitches on the ice are a distraction.
Gameplay
82
Finally making some forward strides, NHL 20 at launch is the series at its best for many years. Slider changes from developers might change that, but you can always tweak it back at least in the deep offline Franchise mode.
Single Player
82
Be a Pro is left behind, but at least the additions to Franchise are fairly enjoyable - and remain thankfully optional.
Multiplayer
75
It's smooth when it works - but matchmaking problems across many modes are a thorn in the side, and lack of progress in EASHL feels disappointing.
Performance
60
Overly busy and long loading menu screens continue to plague the series, with no signs of improvement. Plenty of disconnects and lobby glitches online.
Overall
78
NHL 20 finally offers some forward momentum for this sports franchise, and though it's not all smooth as ice, at least fans have a variety of good reasons to lace up the skates again this year. 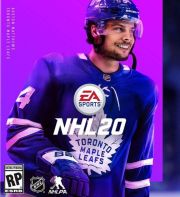